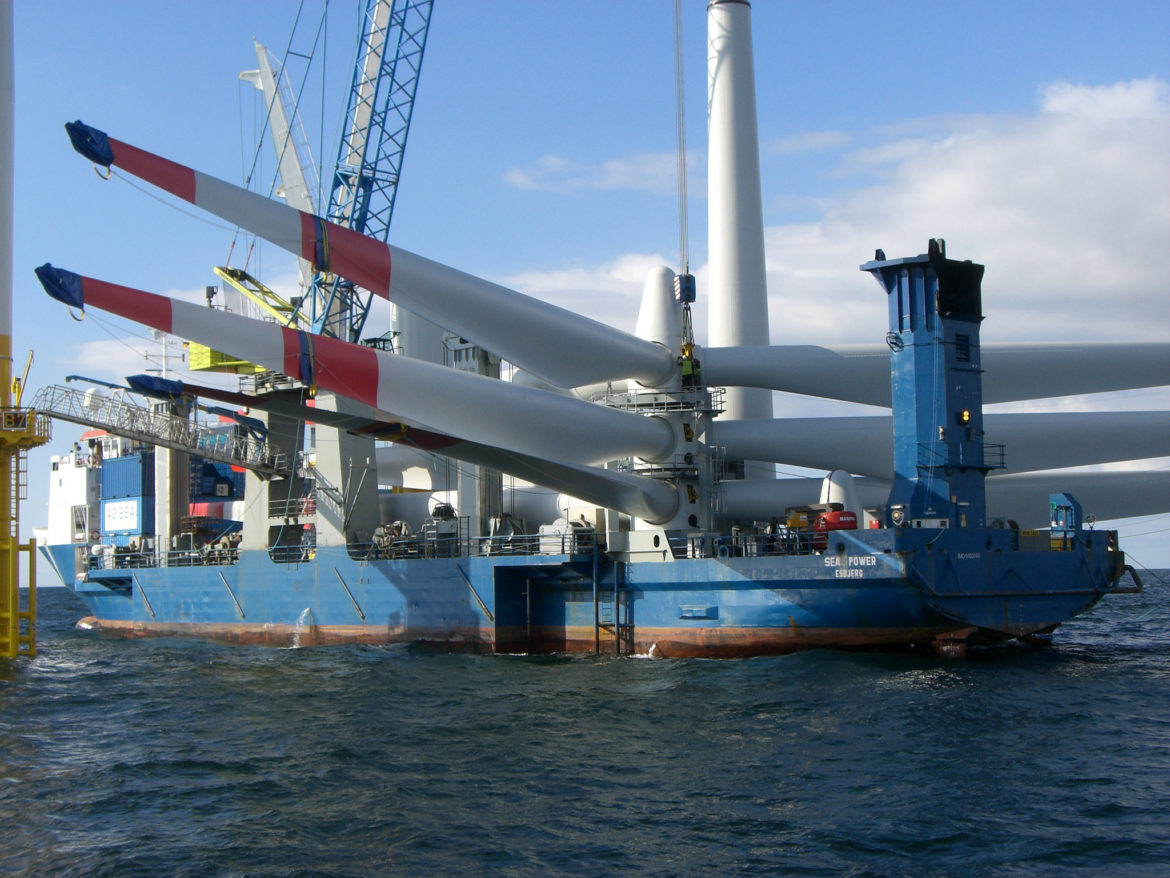 A wind turbine is assembled in the Baltic Sea, off the coast of Germany, in 2010. The offshore wind market in Europe is more than a decade ahead of that in the U.S.

North Carolina is open for business for wind development, now that its 18-month moratorium on land-based projects has expired.

But don’t expect a rash of new turbines to be built anytime soon. Instead, industry experts say the state’s best potential for economic development from wind energy now comes from locating projects off the coast and manufacturing their components.

“I think we’ll see a lot more momentum on offshore in North Carolina than I ever thought possible,” said Katharine Kollins, president of the Southeastern Wind Coalition.

Clean energy advocates worried last year the wind energy ban might not expire on schedule. State Senate Majority Leader Harry Brown tried to extend it during an unusual lame-duck session in December, but legislators in the House pushed back.

“I cannot live with that,” said then-Rep. Bob Steinburg, now a state senator, of Brown’s push to include the extension in an unrelated bill. “There are others here [in the House] who can’t either. I believe we will be fine.”

Steinburg was right, and the moratorium expired as planned on Jan. 1 — but not before exacting casualties on the state’s wind energy industry.

One developer, RES, dropped its plans for Little Alligator, a 29-turbine project in Tyrell County in the state’s northeast corner. Another, Charlottesville-based Apex Energy, stalled work on Timbermill, a 48-turbine project in nearby Chowan County.

“We did put a lot of things on hold with the moratorium,” said Apex spokeswoman Cat Moseley. “It pushed our work back a year.”

Apex has every intention of completing its project, anticipated by 2021, Moseley said. And North Carolina’s existing wind farm — a 104-turbine project of Avangrid Renewables that supplies electricity to Amazon data centers — will continue unscathed.

But in a state once known for its leadership on renewable energy, no other onshore project is imminent. One reason is regulatory uncertainty: while the lifted moratorium is a positive sign, its reinstatement is still a threat.

“Why would you choose this market when another provides more stability?” Kollins said.

Plus, state law has long prohibited tall structures on its ridgetops. So while North Carolina has ample wind resources in its mountain region, “development in the west is still constrained by the Mountain Ridge Protection Act,” said Peter Ledford, general counsel with the North Carolina Sustainable Energy Association.

Developers require long lead times to build their projects, from leasing land for turbines, to consulting with military officials, to obtaining permits. Having already started this process in states other than North Carolina, many companies are now racing to begin erecting turbines to take advantage of federal tax credits that expire at the end of this year.

A push to develop a supply chain

While onshore wind has plateaued for now, Kollins believes offshore wind and its supply chain have the potential to take off in the state.

The federal government has leased an area off the Outer Banks for a wind farm of up to 2.5 gigawatts, more than 10 times the capacity of the Amazon project. Avangrid, the developer, is still in the initial phase of evaluating the 191-square-mile patch of ocean, carefully situated past the Kitty Hawk horizon.

Federal officials have identified equally large expanses off the state’s southern coast for potential wind farm development. To the north, Dominion Energy has leased an area off Virginia Beach nearly the size of the Kitty Hawk block. After fits and starts, the Virginia utility now plans to erect two test turbines nearby by the end of next year.

All of this development presents a chance for North Carolina manufacturers to begin producing the specialized components of an offshore wind farm. The lengthy transmission cables, tremendous blades and other parts are now made in Europe, where the offshore wind market is more than a decade ahead of that in the U.S.

Recognizing these factors, Virginia officials are trying to position the commonwealth for maximum advantage. They set up a separate office for offshore wind. They released a detailed supply chain study and determined how to prepare ports for building components that can only be shipped on water. And they set up a database of component suppliers that they hope to expand to the entire southeast region.

“Both speak to directing [the Department of Environmental Quality] to promote renewable energy businesses within the state,” Kollins said, “and that would in turn support the offshore wind supply chain, which is really what we’re looking at right now.”

Where do the electrons go?

Even so, the state has plenty of catch up to play if it wants to maximize economic benefits from offshore wind development. It has just two main ports in Wilmington and Morehead City, compared to five in Virginia that could realistically be used for offshore wind activities, according to state officials.

The Northeast region is moving rapidly to build projects, with 2 gigawatts of power purchase agreements in place, and another 3 gigawatts anticipated by the end of this year. North Carolina’s Kitty Hawk area is still six years away or more from completion.

Read more: The Northeast is all in on offshore wind with New Hampshire notice

Leasing off the state’s southern coast, meanwhile, appears somewhat stalled, in part due to local concerns about visual impacts of wind turbines. The Wilmington lease area has now been combined with those off the northern coast of South Carolina, and a spokesman for the federal Bureau of Ocean and Energy Management said it “does not have a specific timeline for leasing in this area.”

Too, there’s the issue of whether offshore wind supplies North Carolina’s energy needs. The Kitty Hawk area is in PJM service territory, and Avangrid has already secured a queue position to connect to the grid at Virginia Beach. Duke Energy has no wind energy projects in the state and isn’t prioritizing offshore anywhere right now, spokesman Randy Wheeless said. So, any project developed off the Wilmington coast could end up supplying South Carolina instead of the Tar Heel state.

“Does anybody care about the electrons coming into North Carolina?” Kollins asked matter-of-factly.

One forum for answering that question could be the state’s nascent clean energy plan, another outgrowth of Cooper’s climate executive order. The first development workshop on the plan takes place on Feb. 25.