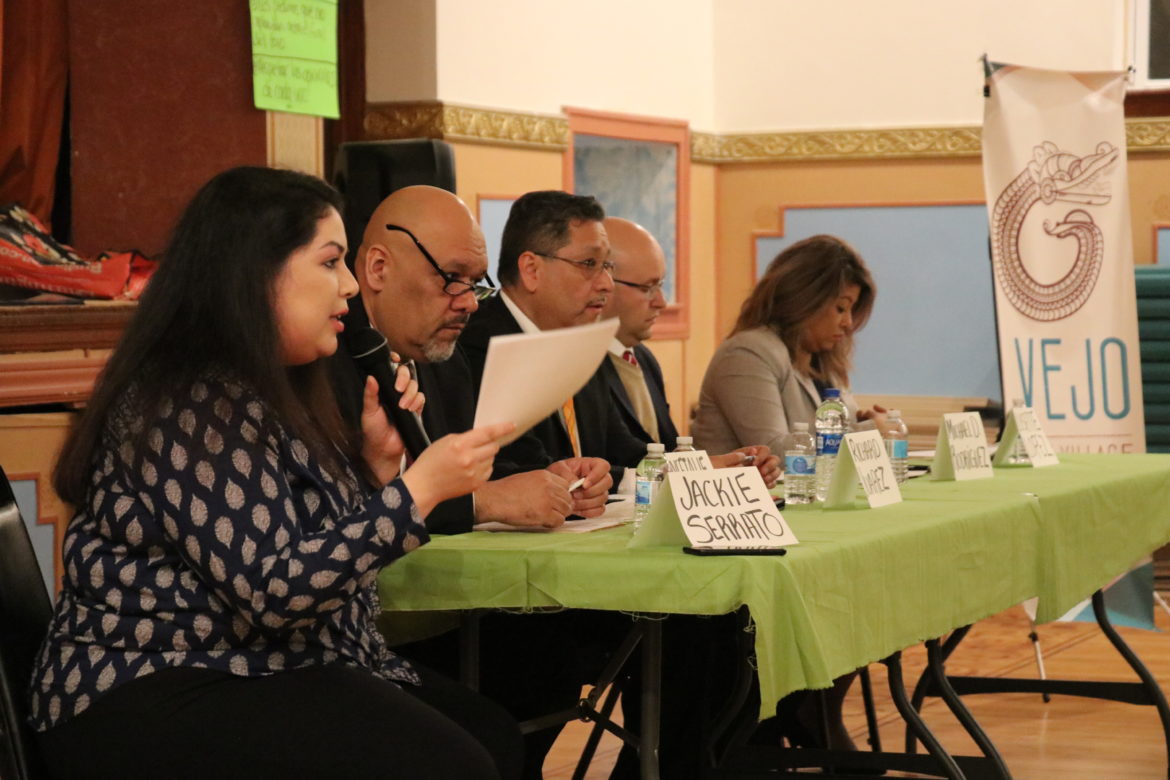 Correction: A previous version of this story said Hilco had purchased the Fisk site; Hilco has not purchased the site and is “analyzing the feasibility of this redevelopment project and will make a final determination about purchasing the site in the coming months,” according to a spokesperson.

The races in the neighborhoods where the plants were located are especially critical since in both cases aldermen who had been in office for decades are not running for re-election.

And in the Pilsen neighborhood, part of the 25th Ward, two of the four candidates had a significant role in the fight to close and campaign to reuse the site of the Fisk coal plant.

Byron Sigcho is the executive director of the Pilsen Alliance, which along with the Pilsen Environmental Rights and Reform Organization, or PERRO, pushed for the coal plants’ closure. Both groups were then appointed by Mayor Rahm Emanuel to a task force on the sites’ future.

Another Pilsen candidate is Troy Hernandez, a data scientist and leader of PERRO, who became active with the group about a decade ago around the fight to shut down the Fisk coal plant.

Both retiring aldermen, Danny Solis in Pilsen and Ricardo Munoz in the Little Village neighborhood, had drawn criticism from local groups who said they didn’t do enough to call for the coal plants’ closure or promote residents’ plans for turning the sites into green space, renewable energy or community centers. Local leaders say they hope Tuesday’s election will be the start of a new path forward for the neighborhoods, driven by community demands and sustainability.

Solis announced he would not run for re-election shortly before the FBI revealed that he was investigated for receiving political favors — including Viagra and sex — and had worn a wire for two years as part of an extortion investigation of long-standing alderman Ed Burke. Munoz announced he wouldn’t run as he was facing a domestic violence allegation and dissatisfaction from local activists.

The Little Village Environmental Justice Organization, or LVEJO, which led the campaign to close the Crawford coal plant, hosted a debate for 22nd Ward candidates and pressed them on issues related to energy and environmental justice. Candidates proposed the coal plant site should be turned into a place for wind turbines and solar panels, a youth job training center, a center for people with Alzheimer’s, green space or light industry.

Many residents would like to see jobs created on the sites, including jobs linked to renewable energy, but there is widespread dissatisfaction over what appears to be the current plan for the sites: logistics and warehousing hubs. The company Hilco, a developer known for hosting logistics operations, purchased the Crawford site and is considering purchasing the Fisk site from NRG Energy; the purchase of the Crawford site in Little Village became public last winter.

“We need to bring jobs into our community, good paying jobs,” said Little Village (22nd Ward) candidate Michael Rodriguez, a longtime community organizer. “But at the same time we can’t bring in corporations that don’t invest in our community [or give them] tax incentives that they’re asking for that aren’t vetted by the neighborhood.” When asked whether he thinks the coal plant site should remain industrial, Rodriguez said, “I’m in favor of a community process to determine what that space would become.” 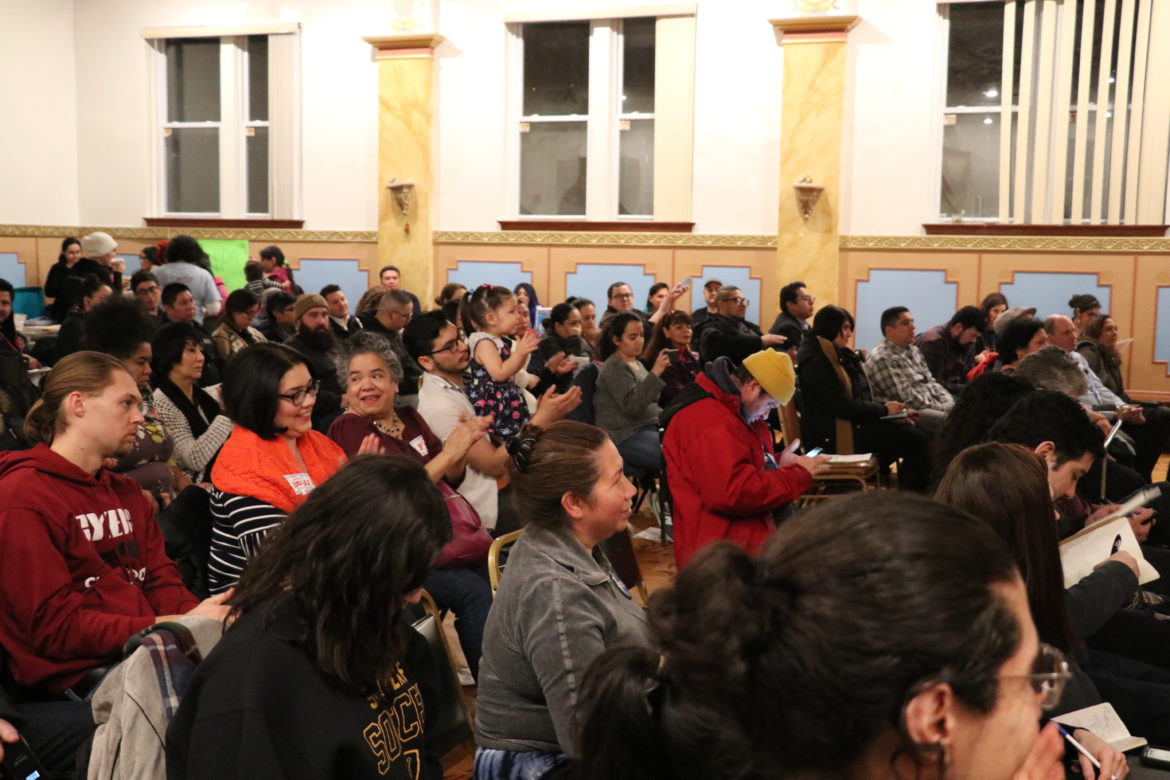 LVEJO executive director Kim Wasserman said the election offers a chance for new leadership, as many feel the neighborhood is caught between pressure for new, polluting industry coming into an area designated as an industrial corridor, and also gentrification as new residents move in.

After the coal plants’ closure, residents in Pilsen and Little Village were part of a city-sponsored task force aimed at proposing redevelopment plans for the sites. But residents are frustrated and angry that the plans have not been realized and have seemingly not been taken into account by the city, NRG or Hilco.

“I think for us as a neighborhood, we’ve been fighting really hard not just for the closure [of the coal plant], but for a new vision — which would include urban agriculture, youth training facilities and renewable energy,” Wasserman said. “There’s no reason why we can’t create our own electricity in Chicago, in Little Village. It’s just, will we be given the opportunity to do so?”

While the coal plant’s closure improved Little Village’s air quality, residents are still subject to extensive diesel pollution from trucks serving industry, and a logistics hub on the former coal plant site would increase truck traffic even more. Fine particulate pollution from diesel released at ground level could pose an even greater health risk than particulate from coal plants released through stacks.

“They want to encourage more industry to move into the industrial corridor, which doesn’t make no sense,” said Yovanny Cabarcas, who is involved with Vota Con Ganas, LVEJO’s civic engagement and voter registration initiative. “That framework that they have is made for the 1900s. It doesn’t have no futuristic vision.”

Wasserman noted that three of the four candidates in Little Village have expressed opposition to Hilco.

“I think what we’re seeing is a change in tide in the 22nd Ward,” she said. “People are acknowledging our history of environmental justice and saying we need to do something about it. So three out of four ain’t bad, in my personal opinion.”

In Pilsen, Hernandez says he would demand Hilco install renewable energy generation and large-scale electric vehicle charging on the site. He sees a recently announced plan for green space on part of the site as an effort to mollify residents and shift the debate away from the main uses of the site.

The election is a critical one for Chicago as a whole, since Mayor Emanuel announced last fall that he would not run for re-election. It is unclear where a new mayor might stand on energy issues. Emanuel prioritized clean energy programs including expanding electric vehicles and solar, and in a 2015 campaign ad featuring Wasserman he took credit for the coal plants’ closing because of an agreement he negotiated — though experts point to market forces as driving the closures.

The diverse field of candidates running to succeed Emanuel have focused on crises in the city’s police, education and pension systems and on violence, rather than energy and environmental issues.

Meanwhile LVEJO sees environmental justice as intrinsically tied to the fight against violence, police abuse, gentrification and other problems. Leaders describe violence as a component of the environment, and say that if young people had more green space and cleaner air for exercising, or job training in fields like renewable energy, violence would also be addressed. Meanwhile the transformation of the old coal plant sites and other relics of past industry could bolster community health, housing and well-being.

Candidate Richard Juarez, director of long-term services at a local health center, said he would like to see a community center with sustainable agriculture and aquaponics along with solar panels and wind energy on the former coal plant site.

“If we can generate electricity from there, we can pay the electricity bill for everyone in this community which in turn will help people keep their homes, especially us older people. That’s how we keep gentrification at bay. Some people say, ‘Dude, you’re dreaming too much,’ but that’s how something starts, hija, with a dream and the courage to make it happen.”

Melissa Regalado, Oscar Perez, Gerardo Salgado, Katie Rice and Chris Schulz are reporting together as part of a partnership between Yollocalli Arts Reach in Little Village and the Social Justice News Nexus at the Medill School of Journalism at Northwestern University.