Photo By
Oregon Department of Transportation 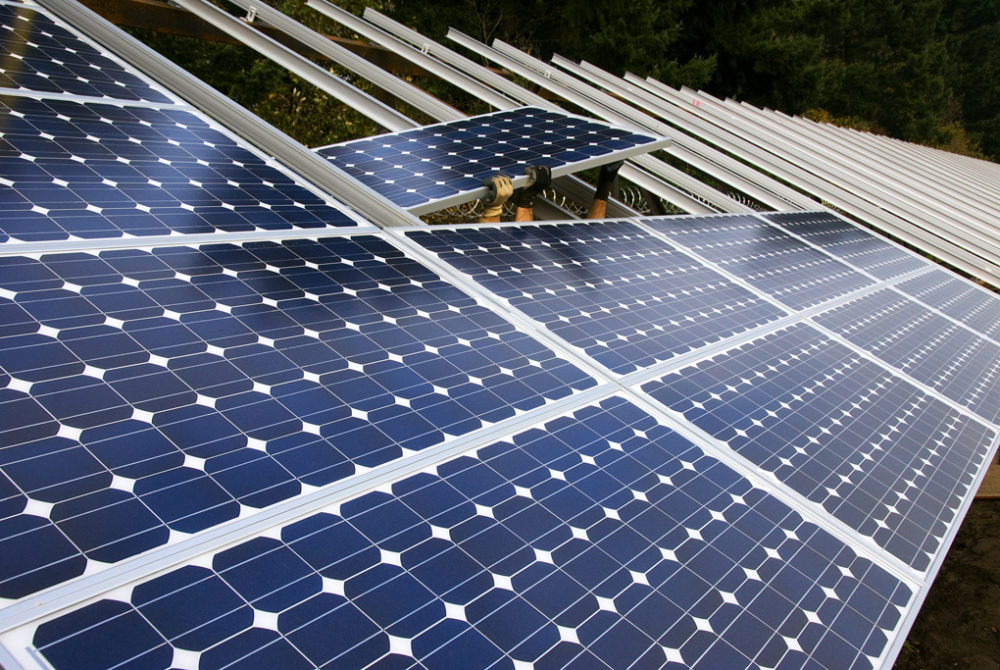 A solar panel is lifted into place.

The projects include a solar farm that would likely be the largest in the country outside of the West.

The Wisconsin Public Service Commission is preparing to decide the fate of two proposed solar farms that, if built, would more than quadruple the state’s solar capacity and pave the way for more utility-scale solar.

The projects are among nearly 30 large solar projects in Wisconsin that are being reviewed by grid operator MISO, with most of them between 100 and 400 megawatts. The falling price of solar panels, state renewable energy goals, and the availability of farmland are all factors driving the projects.

Many are lauding the growing queue as an environmental victory for a state that has long relied heavily on coal-fired power and seen elected officials, regulators and utilities seemingly hostile to solar.

The two proposals currently before the commission would be developed by energy companies Invenergy and NextEra Energy Resources. Two utilities — MGE Energy in the Madison area and Wisconsin Public Service Corp. in the Green Bay area — are seeking to buy all of the proposed 150-megawatt Two Creeks solar farm, and half of the 300-megawatt Badger Hollow solar farm. The commission is considering intervenors’ comments on whether to allow the sales, with a public hearing scheduled for March 6.

Tyler Huebner, executive director of Renew Wisconsin, called the plans “an opportunity to increase homegrown and clean and renewable sources of energy here in Wisconsin.”

“As of 2017, over 50 percent of our power still comes from coal and another 24 percent from natural gas, and we don’t have any coal or natural gas in Wisconsin,” he continued. “That’s a 100 percent export of our money. Making our power here is a real economic development opportunity for the state of Wisconsin.”

‘Making our power here is a real economic development opportunity for the state of Wisconsin.’

But others, including the Citizens Utility Board (CUB), urge caution in undertaking such large projects, to minimize quality-of-life impacts on neighbors and risk for ratepayers. CUB is urging the commission to mandate a cap on how much ratepayers could ultimately be charged for the solar farms, in part because expected capacity payments from MISO for the solar availability of solar could be less than utilities have predicted.

“This case needs to be looked at pretty closely, because the Public Service Commission decision will set the agenda for future decisions,” CUB executive director Tom Content said. “It’s kind of a case of first impressions for a solar project this size. … Our bottom line is we think it should be approved but with conditions [including] proper assurance on setbacks and landscaping requirements,” as well as the ratepayer safeguards.

The companies developing the solar farms are considered independent power producers, and they can sell energy into wholesale markets or through power purchase agreements for any part of the installations that utilities don’t buy.

CUB is also questioning the process used to grant permits for these projects. If the utilities were seeking a permit to build the solar farms, they would face a stricter standard to prove the need for the energy they would generate. But in this case, Invenergy and NextEra are seeking permission to build the projects, and then would sell them to the utilities. That two-step process, Content said, is avoiding a more rigorous review of which investments are most efficient and beneficial for ratepayers.

The proposed 300-megawatt Badger Hollow solar farm developed by Chicago-based Invenergy would include 1.2 million solar panels covering about 2,500 acres of farmland in Iowa County in central Wisconsin. It would reportedly be the largest solar farm east of Nevada, slated to be in service by 2023.

The 150-megawatt Two Creeks solar farm would be on Lake Michigan in Manitowoc County, near the nuclear power plant also run by NextEra.

MGE plans to buy 50 MW of each project, and WPS, 100 MW of each. The cost to the utilities is pegged at about $390 million. The parent company of WPS has said the purchase would save the utility’s customers about $100 million over the lives of the projects.

The city of Madison filed a comment in support of the two solar farms and MGE’s partial ownership, noting that the projects would help fulfill a state law on energy priorities passed a quarter-century ago, calling for all new energy investment to be in renewables when feasible.

But Content said critics see the proposed ownership and development structures as circumventing the Public Service Commission and public input process meant to determine what investments are most efficient and beneficial for ratepayers.

While the utilities need permission from the commission to buy portions of the solar farms, the developers need a Certificate of Public Convenience and Necessity from the commission, as well as permits from state and federal agencies including the Department of Natural Resources and Army Corps of Engineers. The farms would also likely need to sign joint development agreements with municipal bodies dealing with local road use, stormwater management, lighting, insurance and decommissioning.

The environmental assessment completed as part of the commission approval process for Badger Hollow notes that wildlife could be impacted by the fencing off of the solar panels and related infrastructure, and that wetlands would likely be impacted during construction, with revegetation done to minimize erosion and the spread of invasive species. The report noted that in Minnesota, the Public Utilities Commission requires 8-foot fencing without barbed wire to keep deer out of the site, along with a way for other wildlife to pass through. The environmental assessment found that a more in-depth environmental impact statement was not needed for Badger Hollow.

Like wind power often is, the solar farms are being billed as an alternative “cash crop” for struggling farmers, especially since numerous dairy farms have closed in Wisconsin. Badger Hollow’s website says it will mean $59 million in payments to landowners, along with $34 million in local taxes.

Local resident Emily Ennis grew up on a hog farm owned by her grandparents, she explained in a public comment before the commission.

“Throughout my lifetime the farm changed with the rise and decline of the agriculture markets. By 2000, with a declining hog market, our small farm was shipping its last few hogs down the road and looking then towards cattle and crops as a means of income. Today with agricultural market prices and demand at an extreme low, farming the sun is a stable, guaranteed means for a farm family to generate income.”

‘… farming the sun is a stable, guaranteed means for a farm family to generate income.’

But while wind turbines occupy a relatively small area and agriculture can still be done around them, solar panels basically cover the land.

“I feel like this is taking the best, most fertile land in Wisconsin out of production,” said resident Jean Slapak, in a public comment. “I am in favor of solar and wind, but put solar panels in the desert, where they are not using fertile land.”

Huebner said large-scale solar should draw less community opposition and concern than wind, since the noise from inverters on solar panels is much less noticeable than the sounds of wind turbines, and solar panels don’t involve large moving parts high up in the air that could be seen as safety concerns for wind.

Solar farms can also be made more attractive to neighbors if native plants are seeded beneath the panels, and shrubs are planted around the perimeter to obscure them from view.

CUB and some nearby landowners concerned about the solar farms have pushed for rules on siting specific to solar, including setbacks from other property. The state requires wind turbines to be set back 1,250 feet from homes, and former Gov. Scott Walker’s administration had called for larger setbacks of 1,800 feet.

Badger Hollow would be not far from the route of the proposed Cardinal Hickory Creek transmission line, which would bring wind- and coal-fired energy from the west to population centers further east. The line has been controversial in Wisconsin, with some viewing it as a crucial conduit for clean energy and others saying it is not needed and decrying the impact on the environment.

“Use for solar facilities does not preclude a return to other agricultural uses after the lease term,” he wrote in a public comment. “It also does not seem likely that an operating solar farm will harm or limit agricultural use of surrounding land as the solar facility burns no fuel, emits no air pollutants, has no significant water use or discharge and creates no noise. As a matter of fact, recent research indicates neighboring operations can benefit from solar farms hosting more native pollinators.”

Brenda and Casey Kite’s farm would likely be surrounded by Badger Hollow’s solar panels on three sides, as they noted in a public comment filed with the commission. They are worried about glare from the panels affecting drivers, impact on their property values, and other questions including:

“How will rainwater and melted snow runoff impact our well-water system and that of our community? What herbicides truly will be used to spray around the hundreds of thousands of solar panels? In addition, what is the impact of winter weather or a large storm on a project of this magnitude?”

The proposed solar farm “has caused our family and many in the community a lot of stress, fear and anxiety with so many unknowns,” the Kites wrote.

The Kites filed data requests regarding the project, including to determine whether Badger Hollow had offered to lease or buy residences. Badger Hollow objected to many of the data requests, but noted that only one family had been offered such an option, since they planned to sell their dairy herd and get out of the business.

Other residents who submitted public comments were enthusiastic about the project. “This investment in our future is ESSENTIAL,” wrote John and Jeanne O’Connell. Huebner said the solar farms will likely mean growing support for solar and represent a new energy future for the state as coal plants continue to close.

“There’s a sea change in what the utilities want to invest in — they want to invest in wind energy and solar power projects because they are the lowest cost ways to meet their future needs,” Huebner said. “This is absolutely a turning point.”