Photo By
The Ray

An ambitious incubator in Georgia intends to spur a zero-carbon transportation future, despite criticism that its ideas are expensive or impractical.

While solar roads have been criticized as impractical and inefficient, a Georgia foundation says they will continue to be part of its research lab for greener highways.

The Atlanta-based Ray C. Anderson Foundation has received nationwide praise for “The Ray,” an 18-mile stretch of Interstate 85 in Georgia that showcases a variety of technologies aimed at cutting emissions and other impacts from transportation — including right-of-way solar, electric vehicle charging and strategies to reduce pollution.

Solar roads — a glass roadway surface that generates electricity — have seen disappointing results in tests elsewhere, but neither the foundation nor state officials are ready to give up on the technology.

The Ray’s solar road, currently a short section at the project’s visitor center, was developed by a French transportation company, Colas, working in conjunction with the French National Solar Energy Institute. The first installation in France produced only half the power expected. A different experiment in Idaho, called Solar Roadways, generated far less power than expected and was not field tested for traffic. A solar roadway in China may be faring better — though some panels were stolen after it was laid down, and China won’t say what it cost.

“Solar roads are likely to only be a niche source of power in the future,” said Dylan Ryan, a lecturer in mechanical and energy engineering at Napier University in Edinburgh, Scotland. Even with upgrades and modifications, Ryan said, “it’s likely the performance gap between solar roads and conventional solar will remain.”

But The Ray’s board shrugs off such criticisms. They incubate projects in order to test their viability, said Allie Kelly, executive director of The Ray.

“Though smart technology has infiltrated our lives, our roads have not kept pace,” she said. “Our microwaves do more than our highways.” She said that roads could potentially charge electric cars, power homes and offices, light drivers’ way at night, and keep people safe in multiple ways by texting them based on cloud-sourced information.

‘Though smart technology has infiltrated our lives, our roads have not kept pace.’

Before the Wattway panels can be used on roadways here, they will have to be extensively tested. The Ray Foundation points out they are doing just that.

“Colas is developing their third version of the panels now,” Kelly said, “and we’ll install it this year, replacing our current panels.” The first version in France, she said, had a gap at the joints, and when vehicles passed over them at high speed, a loud, helicopter-like sound resulted. In addition, a skid-resistant surface made from a slurry of recycled glass is now being installed inside of a controlled manufacturing environment, eliminating the risk of moisture within the panels.

Kelly said the foundation is also working with Auburn University, which runs the National Center for Asphalt Technology Test Track, a unique accelerated pavement testing facility for the Federal Highway Administration. The university program compresses 10 years of pavement testing into just three, in part by running 18-wheeler semi-trucks on the surface. “We would like to continue working with Auburn for future tests including testing rubber-modified asphalt, the Wattway, and future road technology like wireless [electric vehicle] charging from the pavement,” Kelly said.

Georgia Department of Transportation Director of Operations John Hibbard acknowledged that “it will take years before solar roads move to Georgia’s highways.” But he pointed out that The Ray is still at an early stage of testing, and praised the foundation for helping nudge the Georgia DOT to experiment.

“DOTs can have a cautious approach,” he said. “Working with The Ray allows us to take a bit more risk.”

“The Ray’s board tries things the state would never fund with taxpayer money — at this time,” said Tim Echols, an elected official on Georgia’s Public Service Commission. “But because they have the money and work so well collaboratively, they are able to make that stretch of highway a living laboratory for their projects.” 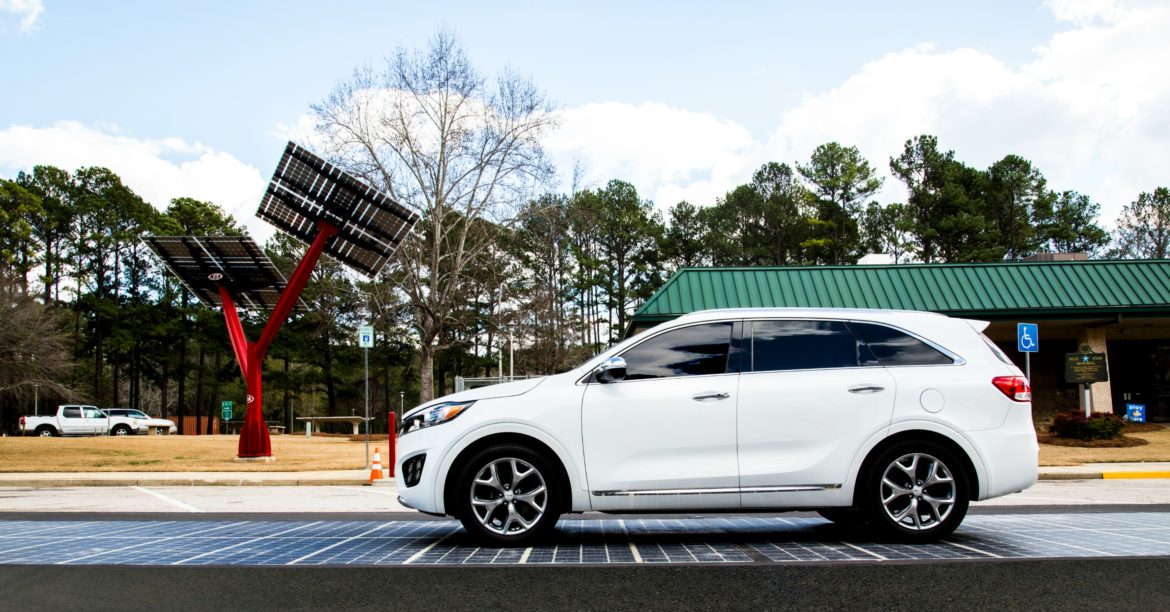 The Ray’s other projects include a solar-powered electric vehicle charger sponsored by automaker Kia.

Rolling out photovoltaic and interactive technologies

The Ray’s other projects include a solar-powered electric vehicle charger (sponsored by automaker Kia), pollinator plants for ground cover on “underleveraged” DOT land, Wi-Fi-enabled way stations to check tire pressure, and by the end of 2019 a 1-megawatt solar array, which was approved by the Public Service Commission and will be installed by Georgia Power.

“That’s 4½ acres of dormant single-use real estate on the highway and we’re going to build an array there,” Kelly said. “We’re only the third state to do this, and it will help other states evaluate the opportunities on their own interstate real estate.”

“We look forward to gaining valuable experience with this pilot project about the potential for solar generation along the highway,” said Georgia Power spokesperson John Kraft.

State Rep. Todd Jones, a Republican from Georgia’s Atlanta-area District 25, expects to see many more electric vehicles in the state’s future. “We’re going to see car batteries going to 500 miles on a single charge by 2020 and 1,000 miles by 2025.”

“We are in talks with Georgia Tech to launch a study on the cost of installing panels at exit ramps along The Ray, along with EV charging stations,” said Costas Simoglou, director of the Georgia Center of Innovation for Energy Technology. “The idea is that if you keep seeing this technology and charging stations, you may be tempted to make your next vehicle electric.” 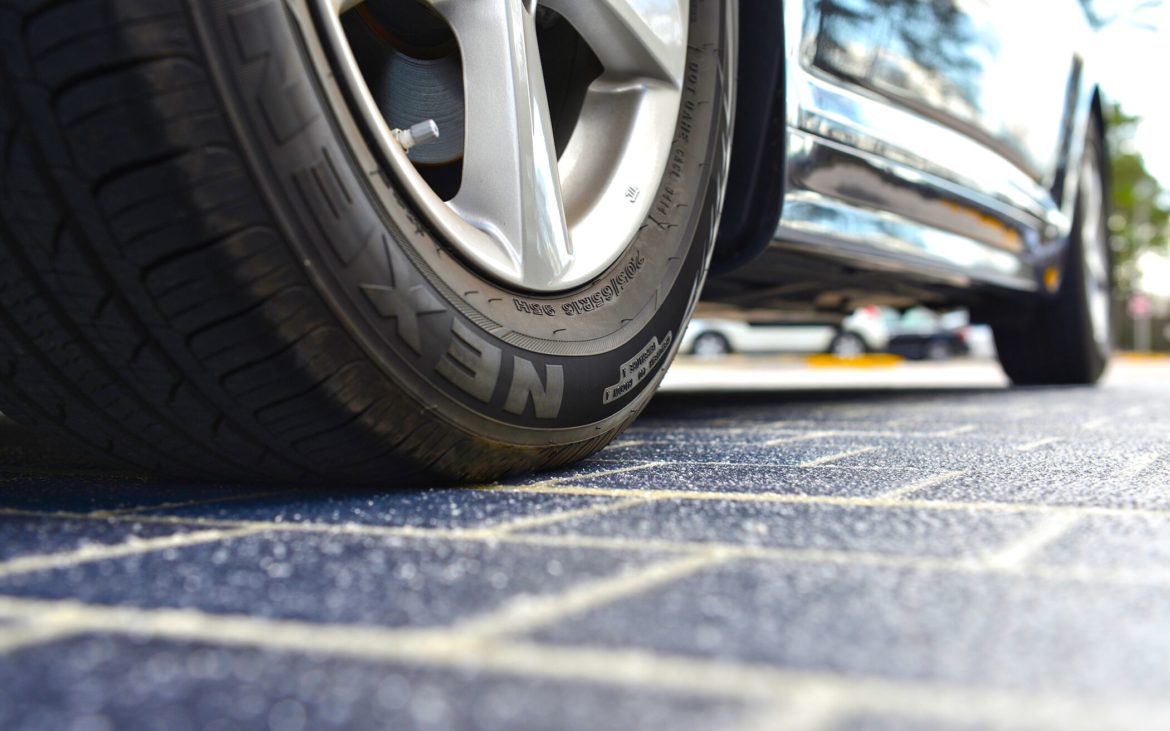 The Ray has also installed a system to measure tire pressure and tread wear.

A study conducted by researchers at Georgia Tech University found that cars on the short stretch of The Ray emit 250 tons of exhaust daily, burn about 9.4 million gallons of fuel each year, and produce 70 decibels of noise pollution on average, disrupting nearby wildlife.

The U.S. Department of Transportation estimates that about two billion gallons of gas are wasted every year because of underinflated tires, said Anna Cullen, director of external relations and communications for The Ray. To combat that, The Ray has installed a system engineered by the WheelRight in England, where individuals drive their vehicles slowly over buried sensors. The sensors instantly measure the tire pressure and tread wear, sending a text message to the driver. it’s a first in the U.S. and, if deployed on a larger scale, could help lower overall fuel consumption. As of November 2018, WheelRight sensors had scanned 18,500 tires at The Ray’s welcome center.

“What I like about the approach of The Ray is that they are willing to spend foundation money to help seed their own ideas,” Echols said. “The state simply provides the land and the cooperation via the rest stop and the right-of-way. By starting small and trying so many things, The Ray’s board is attracting attention from all over the world.”