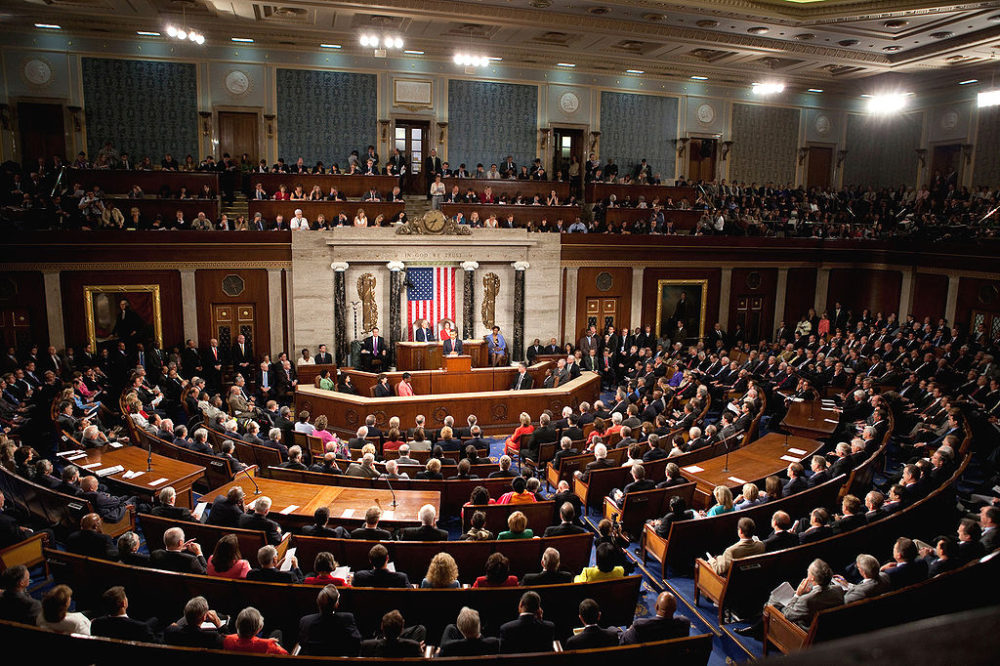 President Barack Obama speaks to a joint session of Congress in September 2009.

If a congressional hearing last week is anything to go by, climate denial is no longer in fashion among some GOP lawmakers who once espoused it.

Republicans on an Energy and Commerce subcommittee took turns affirming human-caused climate change and calling on the House Democratic majority to move legislation that would boost innovation in a host of areas, from carbon capture and sequestration to hydroelectricity and advanced nuclear energy.

“We can lead the world in this space, and we should,” he said.

This is different. Republicans did not hold a climate hearing like last Thursday’s when they had a majority in the House — going back eight years. Instead, during that time many Republicans suggested that climate change wasn’t happening because of human activity. They often suggested that alternative climate science was being repressed or that warming was cyclical, natural and out of human control.

In 2009, Rep. John Shimkus, R-Ill., who is now the subcommittee’s ranking member, said during a hearing in the same room that catastrophic climate change ran counter to his belief, found in the Book of Genesis, that God promised to never again destroy the world as he did in the Great Flood.

“I believe that is the infallible word of God, and that’s how it’s going to be for his creation,” he said then. The topic was an upcoming cap-and-trade bill that the House would pass later that year with only six Republican votes.

High carbon concentrations during ancient epochs had been good for prehistoric plants and fauna, he said.

“There is a theological debate that this is a carbon-starved planet, not too much carbon,” Shimkus said then.

That’s not what he’s saying now.

“Mr. Chairman, when it comes to addressing climate change, let’s take action; but let’s be smart and pragmatic about it,” Shimkus said last week.

‘… when it comes to addressing climate change, let’s take action; but let’s be smart and pragmatic about it.’

Instead of arguing that carbon dioxide is plant food, he said that one of the “useful” aspects of the hearing “will be to learn more about the technologies and actions that are expected to accelerate the reduction of U.S. carbon dioxide emissions.”

Rep. Cathy McMorris Rodgers, R-Wash., who has expressed skepticism about climate change in the past, pined for “realistic proposals.” She touted her state’s hydropower as a solution and questioned whether too much regulation was stifling its growth.

Walden has consistently said throughout the last decade that human emissions contribute to climate change. He’s also held firm in his conviction that one of the top solutions to climate change is forest fire prevention through timber harvesting, which he returned to last week. He also spoke about advanced nuclear energy.

Rep. David McKinley, R-W.Va., said in a 2013 hearing organized by the same committee that surface temperatures hadn’t increased in 40 years. He added that Arctic and Antarctic ice was expanding.

Thursday, he spoke passionately about the need for federal funding to develop carbon capture and storage technology. It’s needed so the United States can continue to use coal — and China and India, too.

This shift has been noticeable since Democrats took control of the House in January. Walden, Shimkus, and former Energy and Commerce Chairman Fred Upton, R-Mich., wrote an op-ed last month calling for climate action.

“We must address climate change in ways that focus on American prosperity and technological capabilities while maintaining America’s leadership in clean and renewable energy innovation,” the trio wrote in RealClearPolitics. “By doubling down on innovation, we can supply the world with new tools to combat emissions.”

Samuel Thernstrom, CEO of the Energy Innovation Reform Project, who was invited by the Republicans to testify at last week’s hearing, said that in private meetings and outreach sessions, Republicans had been exploring a new position on climate science for years.

“You don’t get an op-ed like that just dropping from the sky,” he said.

“I think Republicans are in a very different space now,” he added. “I think they are much more on board with the idea that there are harms to climate change and that they are attributable to man-made CO2 emissions, and the question is not whether we should do something about it but what we should do about it, and to me that’s the most important evolution in the dialogue. Focusing on that ‘what’ question.”

‘I think Republicans are in a very different space now.’

The focus of last Thursday’s hearing was ostensibly the Paris climate accord, from which President Trump has promised to withdraw in November 2020.

But Republicans talked little about the agreement Thursday. Shimkus was an exception, blaming former President Barack Obama for not involving Congress in setting the domestic policies that underpinned his commitment to cut U.S. emissions 26 to 28 percent compared with 2005 levels by 2025.

“If you want to enshrine federal action into law, then you’d have to have a bill through both chambers signed by the president. It’s called Civics 101. It’s how the government operates,” he told E&E News during a committee break.

But he was noncommittal about what Republicans would support, either before the 2015 Paris summit or now. And he shrugged off questions about why — if technology innovation is a long-held GOP goal — Republican majorities didn’t advance it during previous Congresses when they held the majority.

“Maybe there are Republicans that don’t agree with it,” Shimkus said.

Republicans on the committee seemed to agree that the United States, far from being a laggard on climate change, was leading the world in emissions reductions. Other countries, they said, were missing the mark despite their continued membership in Paris.

“If we’re going to deal with climate change, we’ve got to get all the nations involved, and they’re not,” McKinley said in a brief interview.

The idea that other countries might not be doing their fair share was popular with Republicans before “Climategate” in 2009, in which climate scientists at the University of East Anglia had their emails hacked, giving rise to claims by many GOP lawmakers that climate science had been discredited.

Andrew Light, a former State Department climate negotiator under Obama and a witness at last week’s hearing, said he was hopeful that the current shift away from science denial would last.

“The difference to me now from 2007 is that so many of them have some major constituency in their district they want to benefit from a big national push,” Light said. “Ultimately, that’s one way of seeing how anything gets done in Congress.”