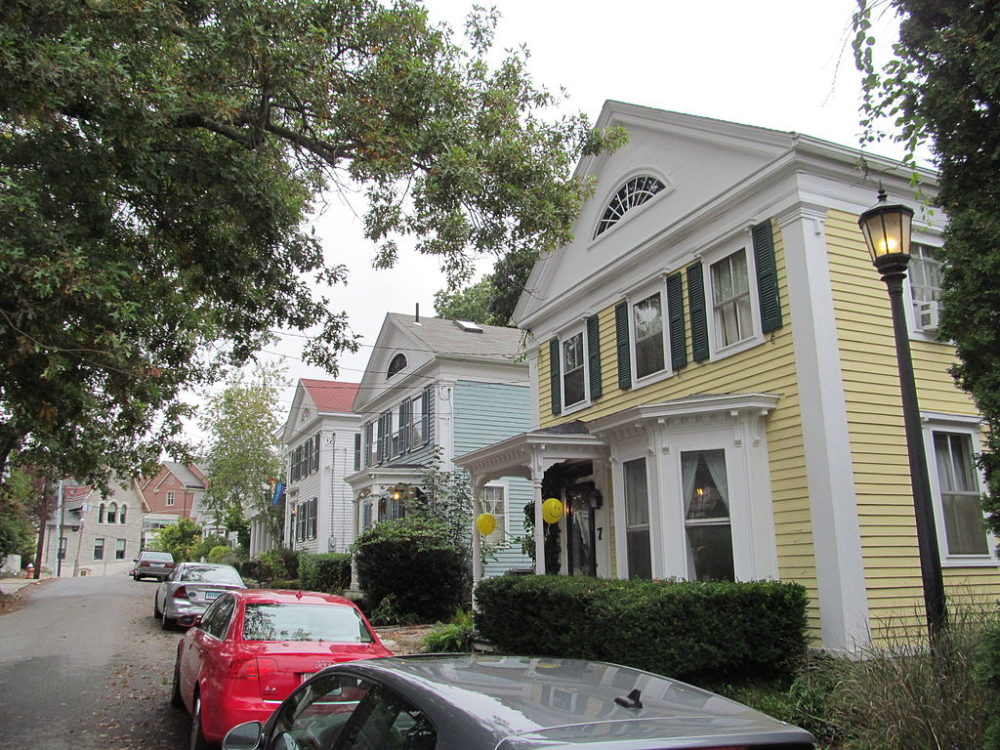 The acceptance of solar comes as technology helps to make systems less obtrusive, and also as more historic preservationists recognize the urgency to address climate change.

Of those 300 solar cases, only 10 were concluded to have adverse effects, but even in those cases the state office was able to work with stakeholders and ultimately approve them all.

“In some ways, the solar panels help the historic structure and don’t harm it,” said Catherine Labadia, deputy state historic preservation officer. “That’s not to negate the few cases when it’s bad.”

The National Trust for Historic Preservation and the Department of the Interior recommend installing solar panels on the area least visible to the public or on any new addition on the property, like a garage. Typically, historic commissions don’t want panels on the principal facade of the building facing the public right-of-ways. If they have to be on the roof, it’s better to have them on the non-street-facing part, or even ground-mounted in a backyard. They also suggest solar panels and mounting systems that match the roof’s color scheme. In general, the lower the profile the better.

‘In some ways, the solar panels help the historic structure and don’t harm it.’

While the Department of the Interior provides guidance for installs in historic districts, the responsibility ultimately falls on the local historic commissions. In Connecticut, the state historic preservation office also provides resources and guidance, as well as handles cases that require state or federal permitting.

In New Haven, Connecticut, a home in one of the city’s three historic neighborhoods is the latest to successfully petition for approval from its local Historic District Commission. Nestled on a sunny street corner in Fair Haven, the single-family home received immediate approval from the commission last month to install a rooftop solar array, despite a few hiccups during the approval process.

After making some adjustments — including moving some equipment inside — Trinity Solar received unanimous approval for the three-panel array on the home’s rooftop. This case is one example of the evolving relationship between historic preservation and green technology in Connecticut and across the nation.

“It’s something people want to see happen and in a way that respects historic integrity in these buildings,” said Elizabeth Holt, director of preservation services at the New Haven Preservation Trust.

That hasn’t always been the view of historic preservationists. Several cities and towns have pushed back against solar on certain properties, believing it would compromise their historic character. In Washington, D.C, a local commission denied homeowners from installing visible rooftop solar panels on their house in the historic Cleveland Park district in 2013. This year, the same commission loosened its restrictions, allowing for visible solar panels, at least in some cases.

“I have a sense that there’s rapidly growing sophistication among preservationists that there’s a societal mandate to achieve greater sustainability and energy efficiency,” said Anthony Veerkamp, director of policy development at the National Trust for Historic Preservation.

He only has an anecdotal sense of what’s happening on the ground, but noted a shift from commissions defaulting to “no.” More boards seem open to working with property owners, whether that means adjusting where to situate an array, or opting for ground-mounted panels instead. He attributes the shift partially to improved technology, with solar panels becoming more streamlined in recent years, as well as the emergence of solar roof tiles. It’s analogous to television antennas or satellite dishes. “First, TVs were the size of car, and now they’re the size of pizza pan,” Veerkamp said.

Plus, a home solar installation can make a difference for state or city climate goals. Municipalities can’t just rely on new housing to reduce carbon footprints; they need to maximize older stock, too.

“I want to believe historic commissions around country are looking for ways that historic buildings can help contribute to reaching carbon goals,” Veerkamp said.

As a preservationist, Holt thinks the realities of climate change mean that preservation and sustainability must go hand in hand. New Haven’s commission has become flexible and collaborative, and she believes they can do that while still championing New Haven’s historic architecture.

“Each case should be reviewed individually to find a solution that respects the historic integrity of the building and maximizes the effectiveness of the solar panels,” she said.

At the state level, the historic preservation office has partnered with the quasi-public clean energy agency, the Connecticut Green Bank, to mitigate any adverse effects installs could have on historic properties. Together, they’re developing a publication they plan to distribute in the coming months outlining best practices on the intersection of energy efficiency, renewable energy, and historic preservation.