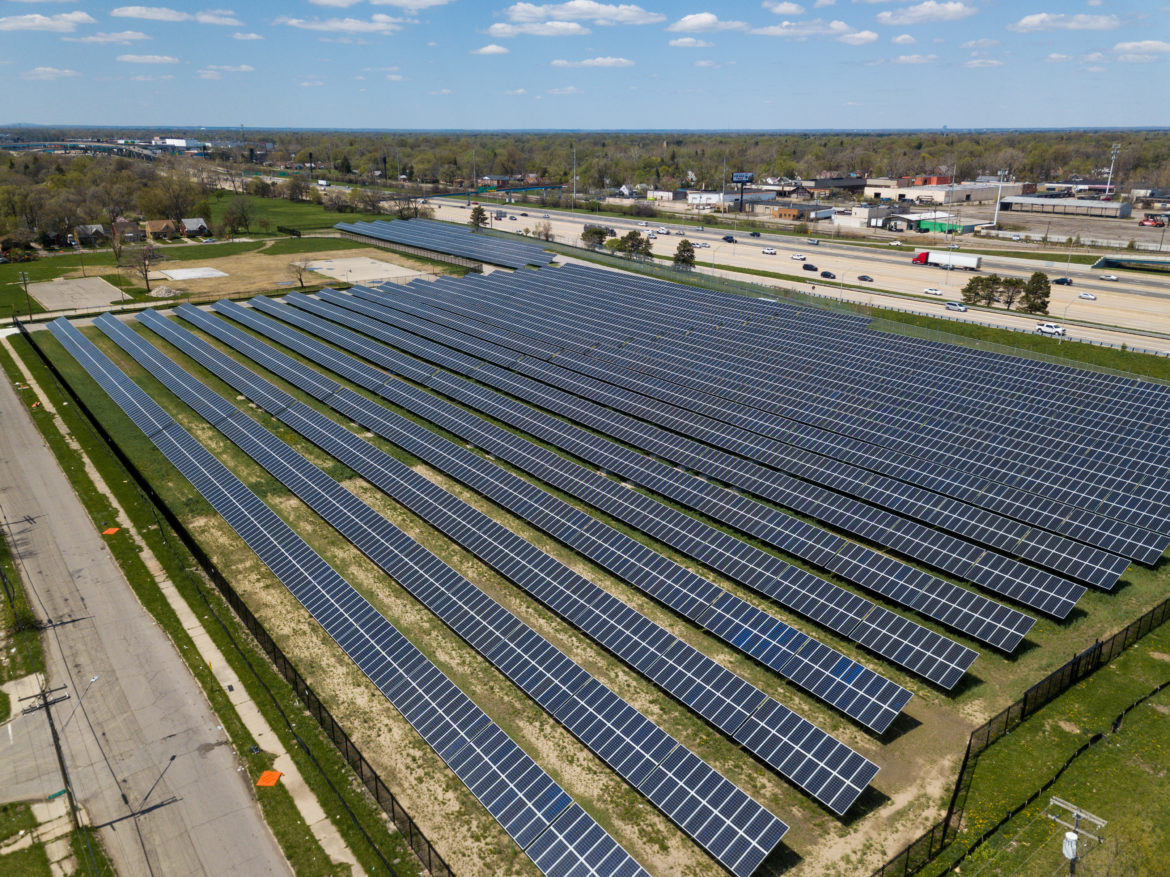 The O'Shea solar project in Detroit, which DTE Energy touted for spurring neighborhood development, has been criticized as mostly benefiting the utility.

Clarification: DTE Energy’s proposed net metering changes came in response to a request by state regulators to replace the current policy. A previous version of this story was unclear about what initiated the recommendations.

Detroit officials and advocacy groups are nearing the completion of an in-depth study of the city’s solar generation potential.

For years, cost and policy barriers have limited large-scale development in the city despite a significant number of vacant parcels. Now, as solar panel prices decline and city officials commit to improving policies, solar advocates say DTE Energy remains the elephant in the room.

Advocates say the utility been unwilling to partner on community solar projects local groups have sought for years. Now the utility, in response to a state request, is recommending regulators replace the state’s existing net metering policy with one that would compensate customers significantly less for power sent back to the grid.

“It’s good to see the city looking at how we create better enabling policies and codes and how we look at the use of vacant land for solar generation. But in none of the conversations I have had do I get the sense there’s hunger to do anything that would challenge DTE,” said Jackson Koeppel, executive director of Soulardarity, an energy democracy nonprofit.

For development to be worthwhile, Koeppel said, a commitment to community ownership and ways for low-income residents to benefit are needed. Besides increasing the payback time on a net-metered project, DTE’s pending rate case at the Michigan Public Service Commission would also increase average residential rates by 9.1 percent.

“Where the solar feasibility study doesn’t go far enough is it doesn’t open any questions about economic equity or community benefits,” Koeppel said.

Elizabeth Palazzola, a program manager with the city’s Housing and Revitalization Department who is working closely on the solar assessment, said community benefits are “the code everyone’s trying to crack right now.”

A spokesperson for DTE said the company already owns 31 solar arrays across its southeastern Michigan service territory, and that all customers benefit from the “efficient investment” in larger solar farms and wind projects.

“We believe there may be innovative voluntary options for dynamic programming in the future, but currently the cost of locating large solar arrays in an urban area is cost prohibitive,” DTE spokesperson Cynthia Hecht said.

She said the utility’s plan to meet demand for community solar will be in the integrated resource plan it files with state regulators in late March.

DTE did partner with the city on a 10-acre solar project at O’Shea Playground that came online in 2017. DTE and the city agreed to a one-time lease payment of $25,000 covering 20 years. The project is utility-owned, though at the time it was announced, DTE touted the project for spurring neighborhood development.

Joel Howrani Heeres, director of the city’s sustainability office, said the O’Shea project is not the best model for solar in Detroit because it would be difficult to replicate, but he pushed back against the assertion that it did not include buy-in from the community. He cited extensive outreach with neighbors and home energy assessments done for nearby residents to lower energy bills.

Going forward, he said the city is “very committed to ensuring that low-income people will have access to benefits provided by any project the city funds. We take that very seriously in Detroit, and our federal funding sources require it as well.”

The city’s solar assessment, expected to be published this spring, was funded by the U.S. Department of Housing and Urban Development’s declared disaster recovery program. The city’s Office of Sustainability, which was created in May 2017, will include the solar assessment in a broader sustainability action plan for the city.

Howrani Heeres said the city has connected with thousands of residents to ensure the sustainability plan is “reflective of their needs.”

The comprehensive solar assessment will include a state and local policy review, the feasibility of doing projects in certain areas, permitting processes and a solar capacity map, among other components. The process has included local advocacy groups, citizens, DTE and roughly a dozen city departments. Another aspect looks at ways local zoning could be reformed to facilitate projects.

Palazzola said a variety of mostly private, small-scale projects have taken off in the city.

“We don’t have the ability to do true community solar,” Palazzola said. “The demand is continuing to grow. We see it as our responsibility to orient ourselves, understand it and account for the pros and cons of putting solar in an urban environment.”

Those include safety, aesthetics, community benefits and the opportunity cost, Palazzola said. “If you put solar on this piece of land it means you don’t do something else on that land for a while.”

Building solar in Detroit is also not as simple as using vacant city land for solar.

“If you have a brownfield tucked away in a neighborhood, [solar] may be a good way to utilize that land for a while, but if you don’t have a meter, you can’t apply for net metering. And you don’t really fit into an energy-buying program unless you can do a power purchase agreement,” Palazzola said. “[DTE] picking up a relatively smaller amount of energy off vacant land, putting it on the grid — they view it as more expensive per electron hour than other options at their disposal.”

Another component of the assessment is when solar would be appropriate for property owners. Detroit’s building stock is in need of energy efficiency and weatherization improvements before it makes sense to install solar.

“Our housing stock and building stock is very aged,” Howrani Heeres said. “Making those buildings the most efficient they can be to reduce future energy usage is going to be the first order of priority for any city buildings included. It doesn’t make sense to spend a lot of money to generate solar when we haven’t reduced the load to start with.”

Briana DuBose, director of strategic community initiatives with EcoWorks, has gathered community input on the solar assessment specifically on social equity. The group plans to assemble a toolkit and “social equity guide” for residents and developers. Educating residents about energy efficiency and weatherization assistance “so it’s not just about solar, solar, solar” is also a top priority.

“We’re giving thoughtful consideration to trying to provide a resource to residents to understand and be empowered by renewable energy development in their communities,” DuBose said. “What we want to do differently from the O’Shea project is take in consideration the needs of the community.”

While cost has been a challenge for solar development in Detroit, Michigan doesn’t have a clear policy for developing community solar. Projects have mostly been one-off through utilities. Minnesota, meanwhile, has built out 508 MW of community solar. Illinois’ recent Adjustable Block Program has led to a spike in proposals from developers.

In December 2017, Soulardarity partnered with University of Michigan researchers on a community solar potential study in Highland Park, a community of 11,000 people surrounded by the city of Detroit. Researchers recommended that Soulardarity use a community power purchase agreement. Under this model, a community group could buy panels and install them at a host partner’s site, such as a church or community center. The host would then pay the owner for the power from the panels.

“This way, the community institution gets cheaper and cleaner power, and the community group can raise money for future projects,” the report says.

Asked if DTE would support community power purchase agreements, Hecht said: “We’ve already worked with the city of Highland Park to reduce their electrical load by switching their street lighting to LEDs and are always interested in working with any community to improve their energy efficiency.”

However, advocates see room for improvement across Detroit. Koeppel believes solar opportunities are “being intentionally limited.”

While she says the city is “really trying to move the needle” on solar development, DuBose added: “[DTE] could be more of a partner in really trying to have solar be a more viable option.”