Royal Dutch Shell’s $10 billion polyethylene plant under construction along the Ohio River in Monaca, Pennsylvania, represents the third stage of natural gas development in the region that started in the first decade of the century. The plant will be powered by a 250-megawatt gas-fired electric generating station.

Wind and solar generation on the nation’s largest regional electric grid lags other parts of the country.

MORGANTOWN, W. Va. — In the contest between competing energy sources to produce electricity in the United States, select regions of the U.S. — especially in windy Texas and the Great Plains, and the sunny Pacific Coast — are tilting to renewable technologies.

But in cloudy and cold rural West Virginia counties surrounding this small city, and in the 12 neighboring mid-Atlantic and Great Lakes states served by PJM — the nation’s largest electrical transmission grid operator — the confrontation between renewable technology and fossil fuels, particularly natural gas, is a mismatch. And it’s anticipated to stay that way for at least the next two decades, maybe longer.

Of the more than 180,000 megawatts of installed generation capacity available from PJM’s members, less than 6 percent is produced by wind or solar technology. Nationally about 15 percent of generating capacity comes from these two renewable resources.

Coal-fired power, counted on a decade ago to generate over 40 percent of the power in the PJM service area, has fallen to less than a third. Natural gas, meanwhile, which was 25 percent of generating capacity a decade ago, is nearing 40 percent. Nuclear power accounts for 19 percent. PJM executives anticipate that a decade from today solar and wind capacity will still not exceed 10 percent of generating capacity. A sizable portion of that, PJM executives say, will come from distributed rooftop solar stations.

Had it not been for passage of state renewable generating requirements in Delaware, Illinois, New Jersey, Ohio, Pennsylvania, Maryland and Michigan — states served all or in part by PJM — the level of wind and solar generation in the PJM service area would be even lower, executives say.

According to market analysts, the reason is as straightforward and visible as the thousands of natural gas wells installed in forests and fields of the triangle of rural counties in West Virginia, Ohio and Pennsylvania drained by the Ohio River. Most of those wells reach more than a mile into the earth to tap the gas-saturated shales of the Marcellus and Utica geologic formations.

With astonishing speed since the first wells were drilled and began producing in 2005, gas developers turned a region once piled with the rusting bones of obsolete industrial factories into one of the largest natural gas production fields in the world. The upper Ohio River region has become the site of billions of dollars of ongoing and planned construction for gas-fired electric stations, gas processing plants, big gas pipelines, and the development of a gas-liquids plastics and methanol manufacturing corridor downstream from Pittsburgh. 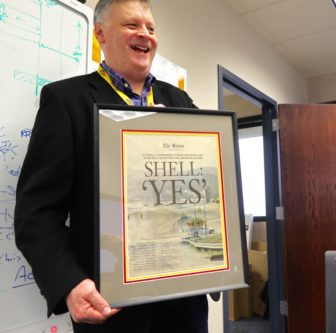 In June 2016, the Beaver County (Pennsylvania) Times reported that Royal Dutch Shell was proceeding with a world-scale polyethylene manufacturing plant on a big bend of the Ohio River downstream from Pittsburgh. Expected to be completed and operational in the early 2020s, the $10 billion plant may be the vanguard of a new chemical manufacturing corridor along the upper Ohio prompted by the mammoth reserves of natural gas that lie below the rural counties in three states drained by the river.

Economic ramifications of the development and ecological risks — especially of the hydrofracking technology that makes it possible — are the source of considerable public disagreement across this mid-Atlantic region. There is, however, no question about the effects of gas production on electricity generation.

PJM, based in Valley Forge, Pennsylvania, and charged with managing an 84,000-mile transmission network across all of six eastern states and parts of seven others in the Midwest and South, is supervising an electrical transmission network fueled principally by natural gas that looks considerably different than what the grid operator anticipated a decade ago.

“It’s an inverse relationship. The potential for wind and solar generating capacity tends to be less in our footprint than in other regions,” said Mike Bryson, PJM’s vice president for operations.

The sun does not shine as long or as bright in much of PJM’s service areas as it does in the Southwest. In the select regions where it does, like in North Carolina, 270 megawatts of solar energy is under development.

In the meantime, natural gas is abundant through much of PJM’s area. “The potential generating capacity for natural gas is high,” Bryson said. “There also is a geophysical dynamic playing into electrical generation here. A combined cycle 1,200-megawatt natural gas-fired plant takes two years to build and 40 people to run it. It’s sitting right on top of shale wells. Developers are looking for natural gas liquids and are practically giving away the gas. The cost of operations are sufficiently low they are competing with subsidized renewable generation.”

Renewable energy development in the PJM service area, which supplies power to 65 million people, is a departure from other regions of the country. Nearly 100,000 megawatts of wind generating capacity has come online across the country, a quarter of that in Texas alone, according to the American Wind Energy Association. The sun is producing 60,000 megawatts of solar capacity nationally, more than half in California and the three desert southwest states, says the Solar Energy Industries Association.

All of the utilities in the 13 states served by PJM produce almost 320,000 megawatts of total generating capacity, or almost a third of the national total. About 7 percent, 22,500 megawatts, is produced from the wind and sun, according to the EIA and renewable trade industry associations.

Before mammoth dimensions of the upper Ohio River Valley shale resources gained clear definition, PJM initiated studies that anticipated as much as 30 percent of its generating capacity would be produced by wind and solar. A study in 2014 found that renewable generation at that level would not hamper the grid’s stability. Benefits included reduced emissions of toxic pollutants and greenhouse gases, and lower consumer costs for power.

At the time, conditions in the region’s gas field were also quite different than they are today. Proven shale gas reserves in Pennsylvania, Ohio and West Virginia totaled about 56 trillion cubic feet, and annual production of methane in these states reached 3.1 trillion cubic feet. By the end of 2018, following the development of thousands of new wells and hydrofracking practices that improved production, shale gas wells in the Ohio Valley produced over 9 trillion cubic feet.

About a third of the 27 trillion cubic feet of gas produced last year in the U.S. came from the shale gas fields of Ohio, Pennsylvania and West Virginia.

The country’s recoverable reserves, according to the Energy Information Administration, are close to 2,000 trillion cubic feet, and nearly a third of the supply lies in the shales of these three Ohio River triangle states. That’s sufficient fuel, at current rates of consumption — about 27 trillion cubic feet annually — to supply the country for 75 years. Natural gas, its promoters say, is shaping up to be the energy source of the century.

Wholesale electricity markets reflect that abundance. Prices for methane, the gas constituent burned in power plants and for heating, are expected to remain in the vicinity of their current level — about $2.50 to $3 per thousand Btu — for at least a decade.

Due to the prodigious supply, gas sets the regional and national price floor for electricity markets in nearly all of the country and especially in the East. That price, judging from futures contracts for electricity, as well as the large number of gas plants that are planned, is projected to remain low.

PJM’s operations employ 700 people and generate $360 million in annual revenue. The gas-dominated electricity market is reflected in the mix of generating capacity now serving PJM’s service area, and in projects under construction.

There are 231 wind and solar generating stations currently supplying PJM’s total non-hydro renewable capacity. Some 19 wind and solar plants are under construction and will produce a total of 217 megawatts of capacity, according to PJM data.

In contrast, the system’s 301 natural gas-fired generating units supply nearly 69,000 megawatts, or 38 percent of the transmission network’s total capacity. Seven natural gas units, which will generate 1,744 megawatts, are under construction.

The outlook for renewable development in the 2020s, though, looks stronger. The grid operator counts 114 wind projects proposed and under development for its service area that could produce 28,000 megawatts of generating capacity. Of that total 10,000 megawatts are proposed for offshore wind farms. There are 531 proposed solar projects in the planning stages that would produce 36,000 megawatts, PJM says. It’s not clear how much of that proposed generation will be built.

Two generations ago reserves of natural gas were thought to be so tight that Congress approved a statute in 1978 — the Power Plant and Industrial Fuel Use Act — that barred construction of natural gas-fueled power plants unless they also were capable of burning coal.

“It’s an interesting dynamic, what’s happening now,” Bryson said. “In the late 1970s, it became against the law to build a natural gas plant. That only lasted a couple of years. Today, the cost of gas has made it a predominant resource.”