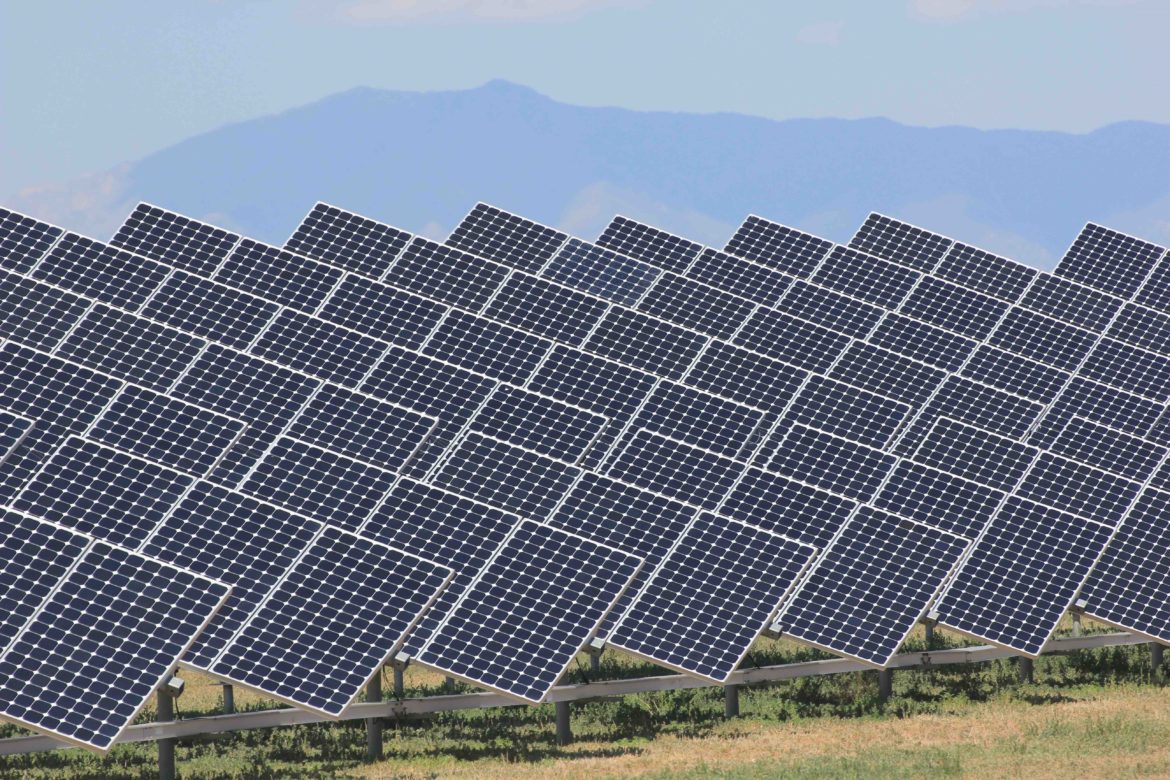 The utility says its interim goal of 80 percent carbon reduction by 2030 can be met with existing technology. After that, it gets more difficult.

As states, cities and towns set goals for 100 percent renewable energy, critics question whether it can actually be done, and done cost-effectively.

In Colorado, Xcel Energy says its recently announced goal of 80 percent reduction in carbon emissions by 2030 can be achieved with existing technology. Costs of renewables have declined, weather forecasts have improved, and engineers have learned how to integrate higher and higher levels of clean power without sacrificing reliability.

But for that final 20 percent of emissions-free power, the company wants to see improved weather forecasts, and, most critically, improved storage technology. Market reforms will also be needed to better manage the grid.

Even these strides will not be enough. As the company noted in announcing a new study on Tuesday, it will need new carbon-free technologies not yet commercially available at the cost and scale required.

In the report, Dr. Brian O’Neill and Steve Hedden, climate modelers from the University of Denver, said Xcel’s goals are consistent with, and in most cases larger than, what will be needed from electrical utilities to minimize global warming as identified in the Paris climate agreement.

Xcel’s mid-century goal is believed to be the most ambitious goal of an investor-owned utility in the United States.

‘Look at how far we have come’

On Dec. 3, with the sun blazing in the windows of the Denver Museum of Nature and Science, Xcel chief executive Ben Fowke announced the ambitious new goals. Just three days before, shortly after sunset as wind picked up on the Great Plains, Xcel operations in Colorado had set a new record for renewable generation – 72 percent – for a full hour.

The 80 percent goal Fowke outlined, however, was not for just an hour, but overall. And not just Colorado, but throughout the company’s eight-state service area. 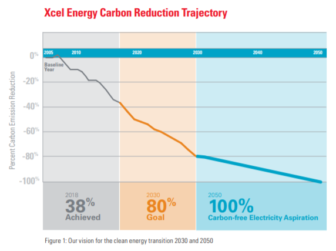 In its “Building a Carbon-free Future” report, Xcel Energy lays out the vision for its clean energy transition. (click to enlarge)

“We have the technology today to allow us to achieve that interim goal of 80 percent by 2030,” he had told reporters earlier.

Larger utilities, tasked with the practical matter of delivering across broad geographic areas, have been more restrained. But Xcel believes that strides in new technology of recent years will continue.

“I have a lot of confidence they will be developed,” Fowke said. “All we have to do is look at how far we have come in the last decade. We have seen reduction in the pricing of large-scale wind and solar by over 70 percent, which means they now compete head-on with fossil alternatives. In fact, we are saving customers money.”

Xcel easily blew past the 2004 mandate imposed by Colorado voters of 1,800 megawatts of renewables, hitting 3,845 megawatts a year ahead of the original deadline of 2020. Wind delivers 82 percent of that generation, with another 18 percent coming from community, rooftop, and utility-scale solar.

More wind came online last fall with the 600 megawatts of capacity in Rush Creek, a wind farm that sprawls across six counties about 150 miles southeast of Denver. Next will come Cheyenne, a 600-megawatt wind farm farther east, near the Kansas border, to be completed by late 2020.

‘By operating [fossil fuel plants] slower and slower, without turning them off, we can then accommodate more wind and solar.’

New wind was a large part of Xcel’s Colorado Energy Plan approved by state regulators last September. With the new renewables, Xcel plans to close two aging coal plants at Pueblo by 2025. With that, Xcel expects to be 55 percent powered by renewables.

Improved weather forecasting in the last decade has allowed Xcel to deepen penetration of wind without risking reliability to customers. The error rate in day-ahead forecasts has dropped from 18 to 20 percent a decade ago to 10 to 11 percent as of two years ago.

Global Weather Corporation, a Boulder company, projects wind – and hence electrical production – from turbines for 10 days ahead. The company updates its forecasts every 15 minutes. The technique uses statistical post-processing to compare production from Xcel’s 6,000 to 7,000 turbines to compare against forecasted production and inform future forecasts.

Forecasts have become so good, said John T. Welch, director of power operations for Xcel in Colorado, that the utility uses 95 to 98 percent of the electricity generated by turbines. It would use all the electricity but for transmission constraints and other considerations.

Knowing when the wind will blow and how strongly has allowed Xcel to reduce the use of coal and natural gas plants. The trick, Welch explained, is to keep plants operating but at reduced volume. Coal requires a long startup, while natural gas plants can begin production in as few as 10 minutes. In pushing toward the 80 percent goal, Xcel will be trying to use the fossil fuel plants less and less.

“By operating them slower and slower, without turning them off, we can then accommodate more wind and solar,” Welch said. But Xcel, for the time being, wants to keep the plants operating. “If the renewables drop off, we can quickly respond.”

This is done through a technology called automatic generation controls. They provide signals to Xcel’s coal and gas plants every four seconds to ensure sufficient generation to meet load. A lack of balance affects the frequency of the electrical grid. Deviation of the frequency beyond 60 hertz can cause cascading outages.

Solar must play a larger role as Xcel pushes toward its 80 percent and then 100 percent goals. Colorado has high-quality solar, rated by the National Renewable Energy Laboratory as among the best in the nation. The utility already has a solar farm in the San Luis Valley, a place of 300-plus sunny days per year and an elevation of more than 7,000 feet. High elevation prevents overheating, as occurs on solar farms in the Mojave Desert.

In coming years, Xcel plans more solar near Pueblo, which has solar values nearly as high as those in the San Luis Valley.

To deepen solar penetration, though, forecasting must be improved. “Forecasting for solar is essential to hitting these goals,” Welch said.

‘Forecasting for solar is essential to hitting these goals.’

Branko Kosovic agrees. He’s the program manager for renewable energy for the Research Applications Laboratory at the National Center for Atmospheric Research in Boulder.

If solar forecasting has improved significantly, it remains in an early stage, Kosovic said. Research funded by the U.S. Department of Energy has focused first on production from utility-scale solar projects such as the Greater Sandhill Solar Farm in Colorado’s San Luis Valley. Comparing the production of electricity with what had been predicted allows forecasters to better calibrate their models. Distributed solar generation, such as on rooftops, poses a greater challenge, because performance data cannot be paired with predictions. Too, they cover a much larger area.

The complexity of information altogether poses what Kosovic and Sue Ellan Haupt, deputy director of the research applications laboratory, in a 2017 paper called a “big data problem.”

Storage must also be part of the answer for Xcel Energy to advance carbon-free energy beyond 80 percent. “There are real limitations to that battery technology as we know it today,” Welch said.

The utility already has pumped-hydro storage at Cabin Creek, just a few miles from Interstate 70 near the mountain town of Georgetown. It is also investing in 225 megawatts of lithium-ion battery storage to be located in both the Denver areas, where most of its customers are, and Pueblo, where most of the generation occurs.

But no storage technology available can be purchased today off the shelf to meet Xcel’s mid-century carbon-free goal. For that, Welch said, technology will be needed to store energy for weeks and months. Spring winds must be harnessed but the energy stored to power air conditioners during the hot days of summer.

Welch suggests he’s most interested in the immediate future in seeing how battery chemistry improves. There are other types of storage, too — possibly including using excess electricity to produce hydrogen.

Utilities in Western states remain generally isolated, unlike the organized markets in other parts of the country. Welch and others say a broader, unified market would more efficiently accommodate transmission of cheap renewables, such as the rooftop solar from California or wind from Wyoming, to meet demands. Discussions have been held but have come up short. Welch hopes for their resumption.

“There’s no doubt in my mind that it helps with high levels of integrating renewables, because you are managing loads of generation over a bigger footprint,” Welch said. “That could potentially be key [to] how we get to both the 2030 and the 2050 goals.”

Even without an organized market, Xcel engineers in Colorado have learned much about how to integrate renewables during the last decade. “At first we thought we needed to have very fast-responding resources” as a backup to the renewables, Welch said. With experience, though, the need for backup resources to ensure that lights and air conditioners continue to operate has lessened.

“The planning processes have evolved to take into account the real capacity contributions of renewables, and that dynamic will continue to evolve over the next several years,” Welch said.

Add all these technologies up and you don’t necessarily reach 100 percent carbon-free. In announcing the goal in December, Xcel’s Fowke and Alice Jackson, president of the company’s Colorado division, stressed that everything remains on the table, including nuclear and ways in which fossil fuels can be burned without emissions.

Xcel has also started experimenting with demand management, such as by offering lower time-of-use rates at night, when demand lowers but wind resources remain available. In this way, demand such as for charging electric vehicles can be shifted to match low- or no-carbon supplies.

Although for many years electrical demand grew at double-digit rates, it has flattened in recent years to 1 to 1.5 percent annually, despite a booming economy and rapid population growth in its service territory. Another factor in Colorado is the recently legalized marijuana industry – grow operations now account for 1 to 1.5 percent of Xcel’s sales.

Energy efficiency explains the slower growth. One megawatt of electricity was once sufficient to power 1,000 homes. Then, as air conditioning and other electrical demands expanded, a megawatt served just 750 homes. That trend has reversed, with one megawatt now sufficing for 1,100 homes.

“We have become more efficient with our electricity even as we have added a lot of air conditioning,” Welch said.