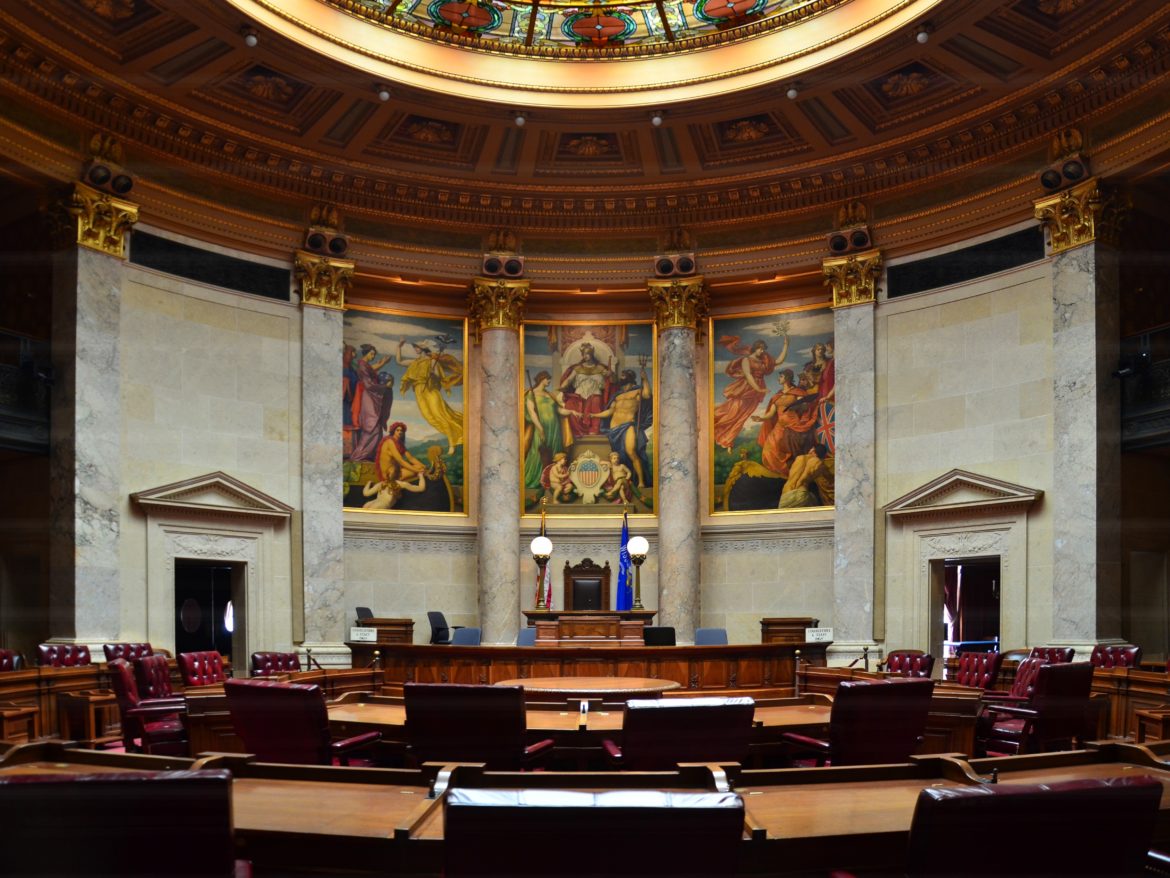 The Senate chamber in the Wisconsin State Capitol in Madison. A confirmation hearing is scheduled to take place here on March 12 for Rebecca Cameron Valcq, who was appointed by Gov. Tony Evers to chair the Public Service Commission.

Wisconsin clean energy advocates are hopeful that the state’s Public Service Commission — widely considered too tight with utility interests and even hostile to the spread of distributed solar — may be poised to take a more proactive role in the state’s shift to cleaner energy.

Valcq spent much of her career representing Milwaukee-area utility We Energies as both in-house counsel and with the private law firm Quarles & Brady. That raised some eyebrows when Evers appointed her to replace Rich Zipperer, a Republican commissioner appointed by former Gov. Scott Walker. (Zipperer left the seat after nine months to become chief of staff to a Republican congressman.)

But Valcq’s actions and statements as part of the commission thus far have led some clean energy advocates to say they think the body may become more conducive to clean energy. Their biggest concern may be that because of her past with We Energies, Valcq could have to recuse herself from a substantial number of proceedings, leaving decisions to Walker appointees Ellen Nowak and Mike Huebsch.

Walker originally appointed Nowak chair of the three-member commission in 2011. He moved her to the Department of Administration as secretary in March 2018, but then reappointed her to the commission shortly before leaving office, with her filling the seat of retiring Commissioner Lon Roberts. She now is being considered for the Federal Energy Regulatory Commission, which would mean Evers could pick her replacement. Huebsch’s term is up in 2021.

Many feel Nowak has been too sympathetic to the interests of utility companies, especially We Energies, which is often in conflict with solar advocates and developers.

Nowak drew particular controversy in 2014 when she appeared on a panel with the We Energies CEO and was accused of having unlawful ex parte communications — or talking outside of public proceedings — with the company, as We Energies was proposing a rate case seen as very unfavorable to distributed solar development.

The commission approved most of We Energies’ requests in that case, despite massive public outcry and what critics called a lack of supporting evidence.

Nowak did not come from an energy background, having worked for Waukesha County and the state Legislature as well as serving as deputy director of School Choice Wisconsin.

Regarding advocates’ hopes that Valcq will shepherd more clean energy development, he added: “Chairperson Valcq believes that the transition to a clean energy economy is occurring due to a convergence of market factors that are driving down the costs of renewable energy in concert with Wisconsin citizens’ demand for a cleaner environment.  It is the role of the Commission to ensure this transition occurs in a responsible way.”

Perhaps the most contentious issue before the commission has been third-party-owned solar, in which a solar developer owns and maintains solar panels that provide energy often for municipal entities or nonprofits that can’t themselves access tax incentives.

The commission in January turned down solar developer Sunrun’s request to open a docket to explore third-party ownership. But Valcq dissented from the decision by Nowak and Huebsch, giving advocates hope she may revisit the issue.

About a year earlier, the commission made up of Huebsch, Nowak and Roberts had turned down a similar request from the Wisconsin Solar Energies Industry Association to clarify the legality of a developer leasing or entering a power purchase agreement involving solar panels.

On March 6, developer Eagle Point Solar filed a petition requesting a docket be opened on its specific request to develop a third-party-owned project with the city of Milwaukee. We Energies has stalled that plan by refusing interconnection to the grid, saying Eagle Point would illegally be acting as a public utility.

We Energies had previously tried to ban third-party ownership outright, and has also pushed for policies and rate structures seen as opposed to distributed solar development. Clean energy advocates have worried that We Energies’ policies not only hurt solar development in Wisconsin, but set an example for other large utilities nationwide that have stuck to more conservative, centralized visions of energy generation and distribution.

Evers has emphasized his commitment to clean energy, and recently proposed a budget calling for decarbonizing the state’s energy by 2050. Clean energy advocates hope he intended to further such goals with his nomination of Valcq, and would prioritize clean energy in appointing someone to replace Nowak if she departs for the Federal Energy Regulatory Commission. Dannenberg said the commission believes Evers’ goal is “realistic and possible as evidenced by one of our state’s utilities already committing to this goal, while all of the other large investor owned utilities have made commitments to reduce carbon emissions by 80 percent by 2050.”

Advocates want the commission to proactively explore issues related to clean energy, rather than just responding to rate cases and other requests.

Dannenberg indicated that would be the case, saying Valcq “currently has plans to open additional generic dockets in the future.”

“There are several topics being considered, including topics related to clean energy,” Dannenberg continued. “One of Chairperson Valcq’s goals is to increase the number and frequency of policy forums and roundtables hosted at the commission in order to engage in a robust, transparent exchange of information. This will allow the commission to hear different perspectives and learn best practices. Chairperson Valcq believes this will allow for the use of data, science and innovation to help inform the Commission’s decision-making.”

The commission is launching an exploration related to increasing electrification of vehicles: Nowak opened a docket in February seeking input on how utilities and customers will deal with electric vehicle charging infrastructure, rates related to vehicle charging and other impacts of electrification. This month, entities including the Citizens Utility Board, Clean Wisconsin, the city of Madison and Tesla filed to be intervenors offering input in that proceeding.

“Definitely Valcq has sent the message we are looking for a wider dialogue than in the past, and we’re definitely hopeful that concerns that have been dormant for a while can now be getting a lot of sunshine and public discussion and progress,” said Content.

“She’s reached out to stakeholders including customer groups and others; she would support a broad discussion of issues beyond the litigated proceedings that the Public Service Commission is known for — filing briefs and counter-briefs in rate cases and utility construction cases.”

Along with exploratory dockets and third-party-owned solar, the commission is considering high-profile issues including proposals for massive utility-scale solar farms and for a high-voltage transmission line, and debate over how to deal with stranded costs from closing coal plants.

Scott Blankman, director of energy and air programs for Clean Wisconsin, thinks Valcq’s utility background will be an asset in handling such decisions, where complex factors are at play and the cleanest or most consumer-friendly option isn’t always clear.

“She was the one commissioner who said she was generally supportive of looking at the underlying issues — it seems to be a sign she’s open to exploring and getting some clarity,” said Blankman, who himself has a utility industry background with 13 years at Alliant Energy Corporation.

“Some of the things that will need to be looked at on a go-forward basis are what’s happening from a grid modernization perspective with new emerging technologies, whether behind the meter or on the distribution side; and solar and battery storage, where technology continues to evolve. We’re hopeful the commission will take a strong look at that.”

“Time is of the essence at this point,” he continued. “We need to get the right stakeholders together sooner as opposed to later to have collaborative conversations.”