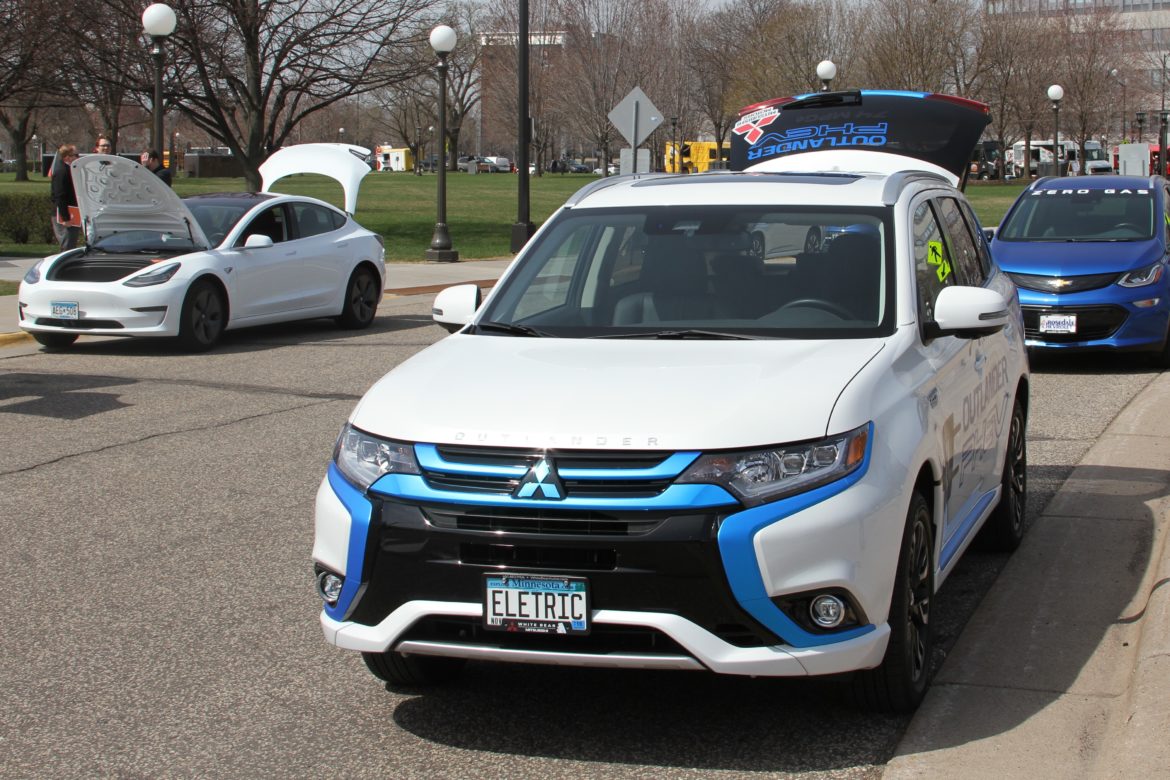 Electric vehicles on display near the Minnesota State Capitol during a demonstration event in May 2018.

Frustrated with falling gas tax revenue, lawmakers in Iowa and Minnesota are looking to drivers of plug-in hybrid and electric vehicles to help fill budget gaps.

In Minnesota, a bill by Republican state Sen. Jeff Howe would raise the state’s $75 annual charge on hybrids and electric vehicles to $125 and $250, respectively, but is unlikely to make it out of a solidly Democratic House.

In Iowa, though, legislation to create $65 and $130 annual fees on hybrids and electric vehicles has already passed out of House and Senate committees. The bills came in response to a state transportation report that estimated Iowa lost at least $317,000 in gas tax revenue last year due to hybrid and electric vehicles.

Underlying the debates is the looming question of how to pay for roads in an era when gas tax revenue — which has never come close to covering the full cost of construction, repairs, and maintenance — is shrinking due to steadily improving fuel efficiency and changing driving behaviors.

As of October, other states’ electric vehicle fees ranged from $50 in Colorado to $200 in Georgia and West Virginia. Hybrids are charged less in eight states, including Michigan, Indiana and Wisconsin, according to a report by the National Council of State Legislatures.

“Electric vehicles pay the same registration fees imposed on traditional vehicles and some transportation-related taxes, but electric vehicles don’t require gasoline to operate, so they don’t contribute to the upkeep of highways through a gas tax,” the council’s report explained.

Research by the Great Plains Institute, however, found that owners of hybrid and electric vehicles actually pay much more in registration fees and motor vehicle sales taxes because the upfront costs are higher than conventional vehicles, said Brendan Jordan, vice president of the Minneapolis nonprofit.

‘This is not the time to start adding new taxes that discourage EV adoption.’

If the new fees were implemented in Minnesota, hybrid and electric vehicle drivers would pay thousands of dollars more over a 15-year period than owners of conventional gas vehicles, Jordan said. Electric vehicle owners are willing to pay their fair share, he said, and a more equitable approach would be to have them pay a rate equal to the amount of gas they would consume. But since electric vehicles have a high mileage equivalency, their owners would pay on average around $25, he said.

“This is not the time to start adding new taxes that discourage EV adoption,” Jordan said. “You don’t stick taxes on technology that has public benefit on a market that’s just starting to emerge.”

A better time to address the surcharge issue would be when the cost of electric vehicles and hybrids are at parity, likely in five to 10 years, Jordan said. And the problem of growing road repairs, he added, has little to do with passenger cars and much more to do with damage caused by heavy duty trucks.

Stuart Anderson, director of the Iowa Department of Transportation’s Planning, Programming and Modal Division, said the average vehicle in the state generates $150 worth of fuel tax annually. The department assumed 85 percent of charging happened at home, and arrived at charging drivers for that percentage as the road tax, or $130 annually.

A second recommendation assesses fees at commercial charging stations to capture revenue from commercial and out-of-state vehicles, as well as from Iowans who charge outside of their homes. “That way there’ll be no double-counting of charging fees,” Anderson said. The study suggests a tax of 2.6 cents per kilowatt-hour at charging stations.

Anderson conceded that the road tax only pays a bit more than a third of the total road funding in Iowa and the contribution from electric vehicles likely will remain small. “We definitely aren’t doing this as a way to [discourage] electric vehicles,” he said. “The state energy plan has in it more ways to make electric vehicle infrastructure accessible.”

In Minnesota, Jordan is not the only one questioning the wisdom of adding a bigger fee for these vehicles, especially in a state already known for high taxes.

The Alliance of Automobile Manufacturers’ lobbyist Sandy Neren said her organization does not oppose a fee but Howe’s proposal is too high. “Going from $250 from $75 would make Minnesota have the very highest tax on electric vehicles and hybrids in the country,” she said.

The hybrid charge bothered the association because it is unclear how much gas the vehicles require. Some models may consume more gas than conventional gas vehicles, she said. Nor are all hybrids alike — several different operating systems are now being sold, Neren said.

“My client tells me there are 480 different models of cars that get more than 30 miles per gallon, and most of them use gas,” Neren said. “You may be penalizing something for just being called a hybrid that gets worse mileage than a gas vehicle does.”

The reason Minnesota and other states have been losing gas revenue is because all vehicles are 30 percent more efficient on average than a decade ago, Neren said. Instead of taxing gas consumption, states may have to look to other ways to charge drivers for the cost of roads, she suggested.

A legislative committee is studying how to charge a tax by miles driven, Neren said, while at an electric vehicle hearing a suggestion arose to assess fees based on vehicle weight. Since those approaches — along with Jordan’s idea — might be years off, legislators continue to view hybrids and electric vehicles as a revenue target.