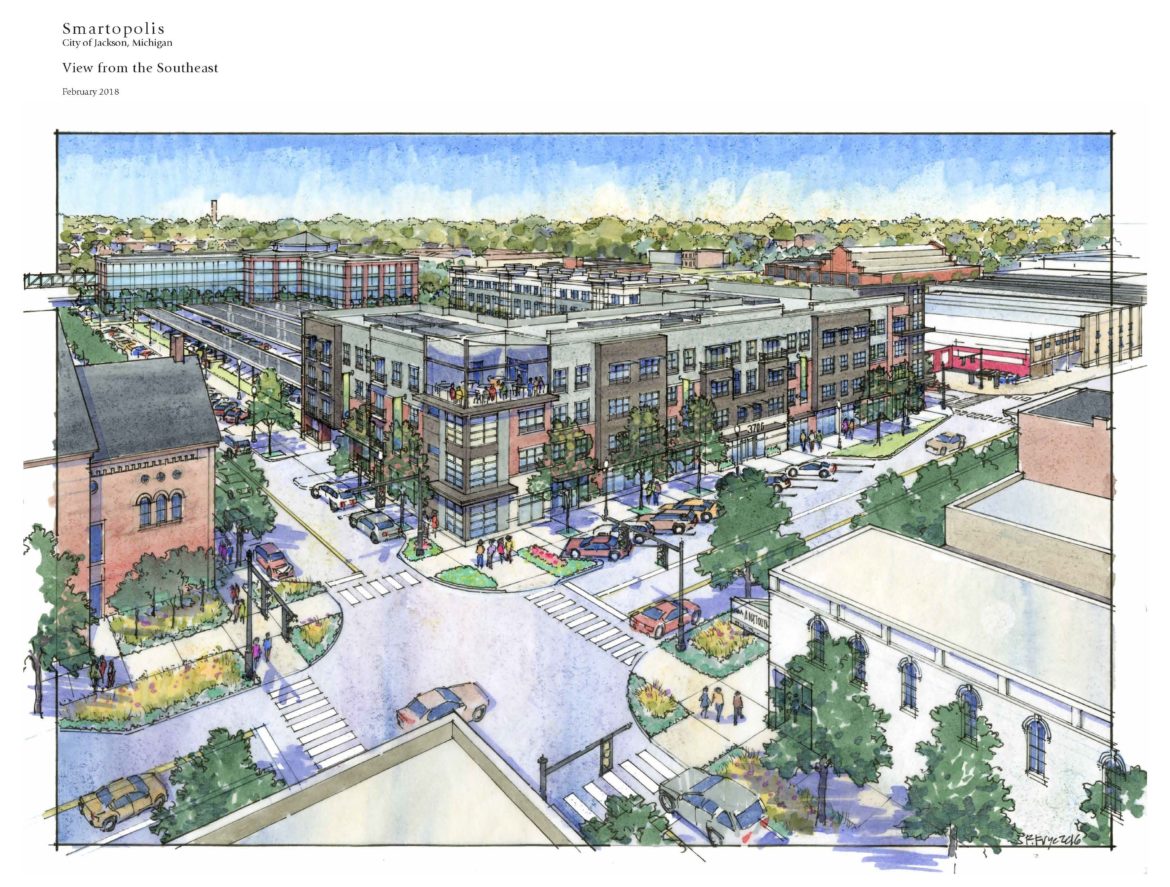 A rendering shows the vision for a smart energy district in Jackson, Michigan.

Consumers Energy plans to combine solar and storage in a 4-square-block project in Jackson, Michigan.

Consumers Energy announced plans last month for a smart energy district on a 4-square-block area near the utility’s headquarters in Jackson. Though not formally a microgrid, the plan calls for developing a “smart energy community” around renewables, battery storage and electric vehicles, mirroring concepts of interconnected “smart cities.”

Michigan and the Midwest have lagged other regions when it comes to utility microgrids and battery storage, but cleantech boosters hope that’s starting to change.

“We’re kind of coming up to speed on renewable energy, microgrids and storage. I think the level of interest in microgrids is starting to expand in Michigan,” said Nathalie Osborn, director of smart grid initiatives at NextEnergy, a Detroit-based business accelerator.

Consumers issued a request for information for companies to be involved. Osborn said NextEnergy is interested in potentially helping with program management.

‘The primary purpose is to understand the landscape of the smart energy value chain.’

Consumers’ announcement comes less than two years after the utility launched Circuit West, a similar microgrid concept in Grand Rapids. Both would be connected to the grid, but the idea is to build grid resilience and net grid benefits in designated urban areas.

The Jackson project could be used to “identify repeatable, scalable solutions they can invest in and work with entities on,” Osborn said.

While Circuit West was effectively a development project with local companies in Grand Rapids, Consumers wants to solicit input from advanced energy companies nationally for the Jackson project.

“We’re not picking solutions,” said Paul Gruber, Consumers’ manager of product and business development. “We want the best ideas to achieve some clean energy goals. The primary purpose is to understand the landscape of the smart energy value chain.”

A report last year by Navigant Research detailed how microgrids have been slow to gain traction in the Midwest. Researchers have characterized Illinois as the “bright spot” of the region, with Michigan and Minnesota following. However, most microgrid projects are built in the private, rather than utility, sector. A barrier to development in the Midwest has been low power rates that create less of an incentive to build for commercial and industrial customers. 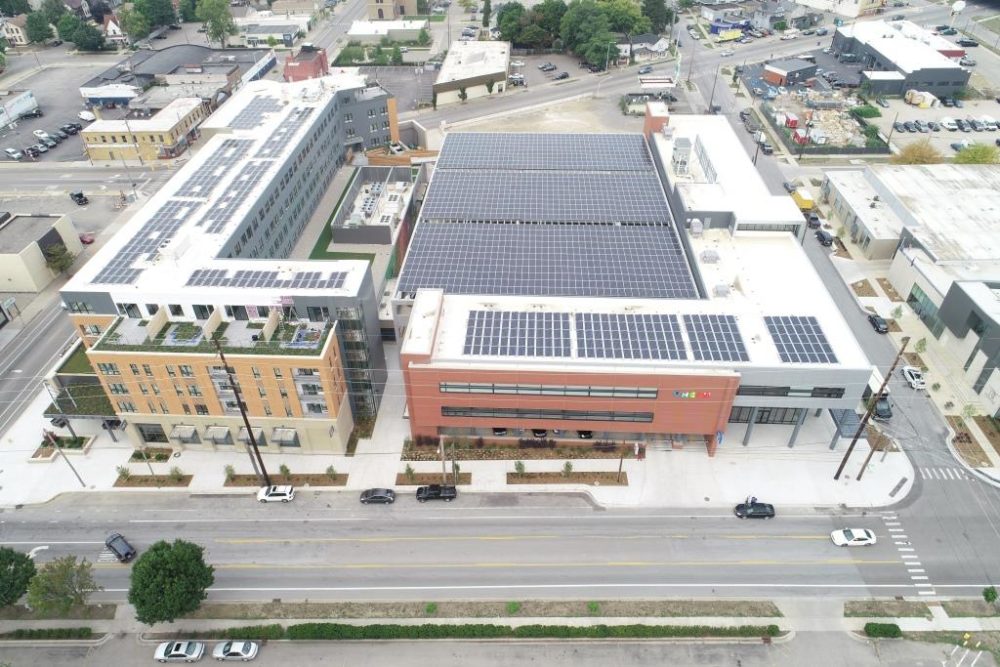 Battery storage is a key component for microgrids to rely on renewables. In its long-term integrated resource plan under consideration by state regulators, Consumers proposes to ramp up battery capacity to 50 megawatts in 2032, increasing to 450 megawatts by 2040. It also has storage pilot projects underway in other parts of the state.

The challenge with larger-scale storage, though, is whether to classify it as generation or load. In reality, it’s both.

“We’re seeing a lot of interest in storage at the residential and small-scale commercial level,” said Cory Connolly, vice president of development and community projects for the Michigan Energy Innovation Business Council.

‘There is no roadmap for the smart city. We have the opportunity to figure this out.’

At the end of last year, state lawmakers adopted a House resolution encouraging the Michigan Agency for Energy to “undertake a collaborative discussion with all interested stakeholders concerning the potential to integrate energy storage into Michigan’s electric market.”

“That’s helping drive some real interest,” Connolly said. “There’s more work to be done to make it a vibrant market here. Larger projects are where there may be some policy points of friction we’d need to figure out.”

“Michigan has not been terribly friendly — MISO, too — to energy storage technologies in the way the market has been set up, particularly for front-of-the-meter utility customers,” she said. “That’s changing.”

An order by the Federal Energy Regulatory Commission hopes to clarify the market value of storage. The proceeding could lead to a flood of new storage projects. Regional grid operator MISO has proposed initial plans for storage to play a bigger role in the market by creating new tariffs and accounting for ancillary services to the grid. Peretick said these ancillary services such as frequency regulation and voltage control are a way for developers to make money on projects.

“That was a big barrier to invest in energy storage in Michigan,” Peretick said. “We are just now really starting to look to Michigan as a place to start deploying some of our utility projects.”

Gruber came to Consumers from Sierra Energy, a waste-to-energy company in California. He said Michigan “doesn’t have quite the regulatory impetus” to push development in larger-scale storage and microgrids. While leading a research consortium at the University of California Davis, Gruber worked in a zero net energy community that includes thousands of students.

Michigan’s climate compared to California’s is also a challenge, he said, referring to solar potential.

“There is no roadmap for the smart city,” Gruber said. “We have the opportunity to figure this out.”

Researchers at the University of Michigan recently explored the potential for microgrids in Ann Arbor, finding the city’s “potential is promising” for islanding critical assets like fire stations.

Peretick agreed that distributed generation resources at the local level are among the top trends in the energy sector.

“Storage and distributed resources are really key to making microgrids work,” Peretick said. “With the variety of storage technologies that exist and the advances happening, it’s possible to make all of this happen at a much more local level and be able to operate really high renewable penetrations that can be offset with storage.”

Osborn said a challenge is coordinating the roles of various entities — not just utilities.

“It’s easy to say, ‘Hey, let’s do a solar system here, or a wind project here.’ But we also have to keep in mind things like infrastructure,” she said. “There’s a complicated network when connecting with the grid that not only impacts utilities and residents, but also system operators and how that’s distributed here and across the region.”

“Those things can appear like barriers, but it’s also a huge opportunity,” Osborn added, noting that Consumers and DTE Energy are increasing investments in renewable and electric vehicle infrastructure. “As we look forward here in Michigan and nationally, it’s a huge opportunity for us to incorporate microgrids, combined heat and power technology, renewables, battery storage and charging into creating more resiliency for our grid.”