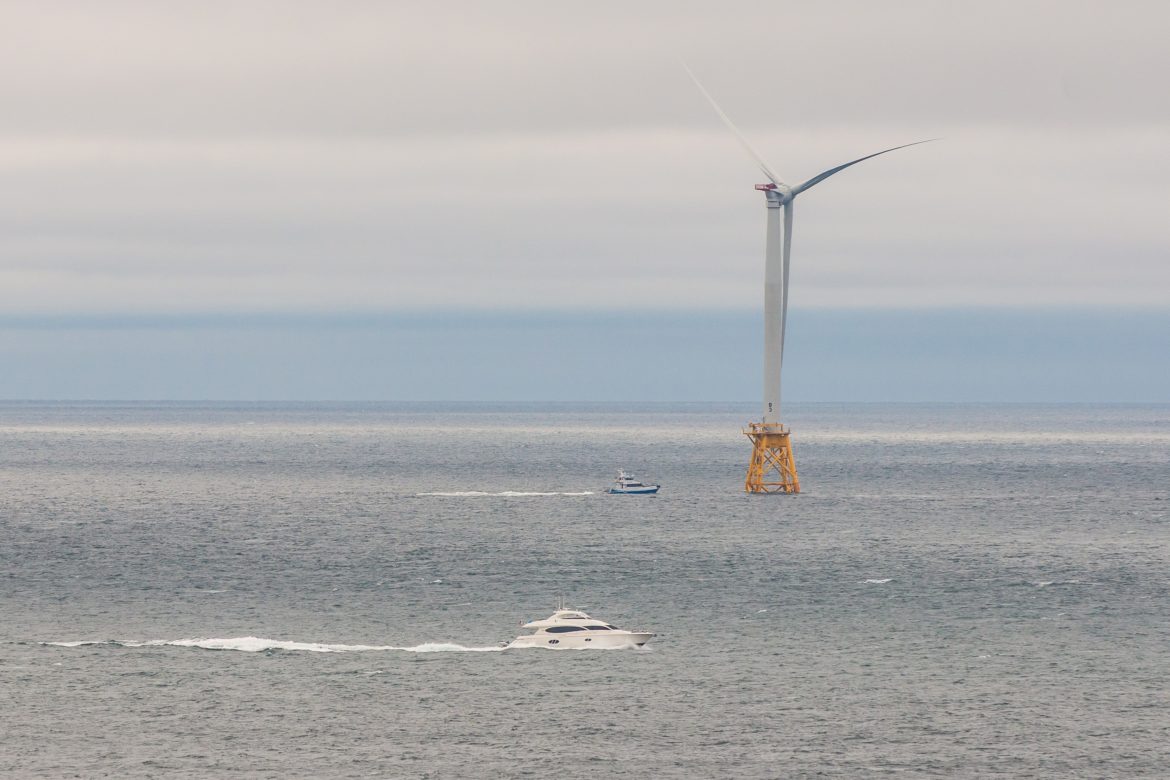 The Block Island Wind Farm, the first U.S. offshore wind farm, as seen from Block Island off the coast of Rhode Island.

State officials are considering whether to launch a second request for projects as soon as next month.

As Massachusetts gets ready to issue its second request for offshore wind proposals, the state is weighing whether to speed up its procurement process to allow developers to reap federal tax benefits. Energy developers and environmental groups are encouraging the state to launch the solicitation as soon as next month.

This push comes as the state faces growing concerns that a price cap on offshore wind power could undermine the state’s burgeoning offshore wind industry if developers decide to seek friendlier markets in other states.

“To ask people to invest, to build, to set up shop, to have their operations here — that requires them to be able to make some money,” said Rep. Patricia Haddad, a legislator from the southeastern part of the state, where the wind industry is expected to center.

Massachusetts is on the verge of realizing its potential to be a leader in the development of offshore wind, say many in the energy and environmental worlds. Vineyard Wind, expected to be the country’s first large-scale offshore wind farm, is under development in waters south of Martha’s Vineyard and has been chosen by the state to provide up to 800 megawatts of power. In 2015, a state-supported marine terminal was built in the city of New Bedford to act as a staging area for offshore wind construction, and a facility in Charlestown tests and certifies turbine blades.

However, many worry this progress could be threatened by a legal requirement that each successive procurement of wind have a lower contracted price than the one before.

‘To ask people to invest, to build, to set up shop, to have their operations here — that requires them to be able to make some money.’

To ensure prices would decrease into the future, lawmakers included the pricing provision.

By the time Vineyard Wind came along, however, the offshore wind industry had evolved. Whereas Cape Wind proposed using 3.6-megawatt turbines, Vineyard Wind intends to use 9.5-megawatt turbines, allowing it to do more with fewer installations. Furthermore, a federal investment tax credit had come along, allowing developers to recoup some of their costs in tax benefits.

“These factors combined to produce prices that were shockingly low, considering what people’s expectations were,” said David O’Connor, senior vice president for energy and clean technology at ML Strategies.

In August 2018, Vineyard Wind announced its price would be just 6.5 cents per kilowatt-hour. Quickly, environmental advocates, policy experts, and government leaders began to wonder if developers would be willing — or able — to beat this price, or if they’d rather head to a state with fewer financial hurdles. At the same time, the federal investment tax credit is due to expire at the end of 2019, cutting off another important source of returns for these projects.

“We’re now in a position that absolutely no one anticipated in 2016 when that law was written,” said Caitlin Peale Sloan, a senior attorney for the Conservation Law Foundation.

There is a possible, albeit short-term, solution: accelerating the next round of wind procurement, so developers will be able to take advantage of the tax credit before it phases out entirely.

The law requires the next wind power request for proposals to be issued within two years of the first one, which means the request must be released before the end of June 2019. However, in response to a request for public comment about the timeline, several wind developers and environmental groups urged the state to issue the request by April 1, if not sooner, and to select a winning proposal by Oct. 1.

This approach might give developers the chance to spend enough on the project to qualify for the tax credit, allowing them to keep their eventual price within legal limits. Whether such a tight timeline is feasible, however, is an open question, O’Connor said.

“That would be remarkably fast,” he said. “It’s not at all clear just how realistic that schedule is.”

Furthermore, if the state wants to build a thriving wind industry in the long term, the price cap has got to go, said Haddad, who has proposed a bill that would eliminate the provision.

“Right now, the investment and the jobs are paramount,” she said. “I truly believe that has to be driven by a market, not by a legislature.”

There appears to be broad support for a measure removing the price cap, but the timing remains crucial, supporters said. If the issue is not resolved quickly, Massachusetts could lose momentum and another state could gain a foothold in the rapidly changing wind industry, Peale Sloan said.

“If the industry slows,” she said, “then maybe the supply chain gets developed in New Jersey or Maryland.”