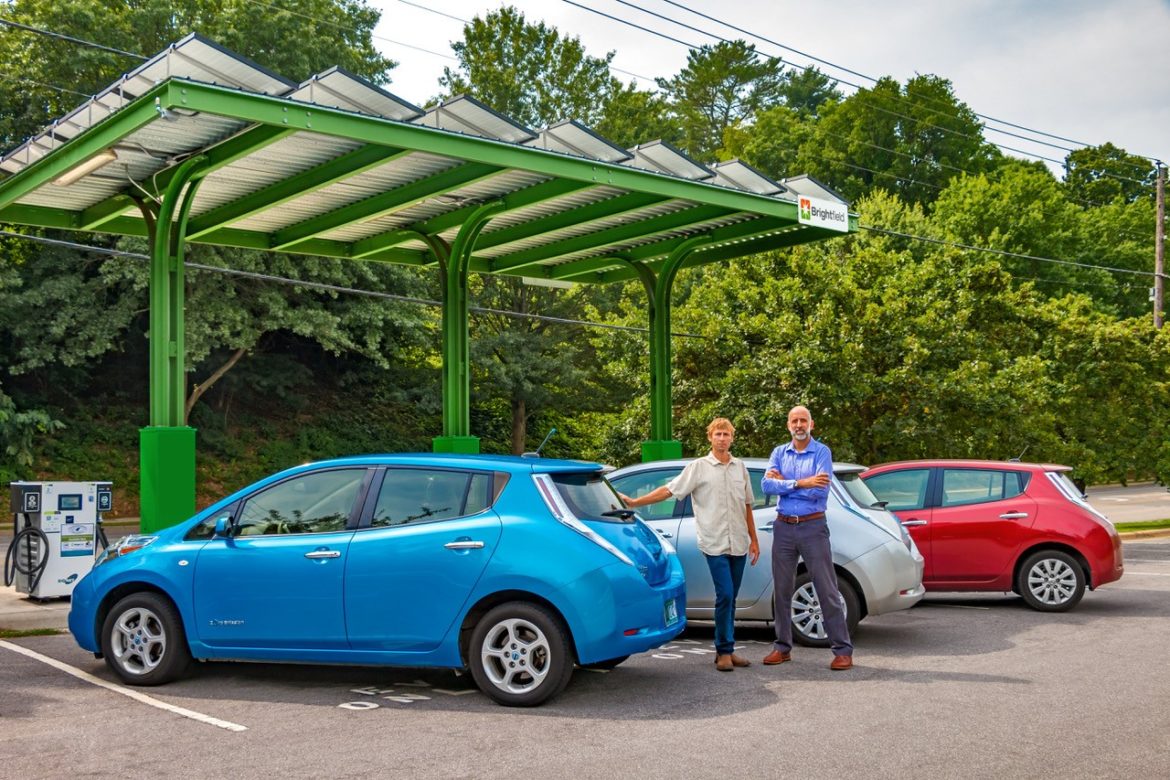 A new bill introduced in the North Carolina General Assembly this week could change that, allowing charging stations — just like campgrounds and marinas — to resell kilowatt-hours originally purchased from an electric utility.

The legislation wouldn’t require free plug-in stations to start demanding payment. But backers of the measure say it would help the charging stations that are trying to turn a profit, spurring more outlets to crop up around the state and more North Carolinians to drive electric.

Bill author Rep. John Szoka, a Republican from Fayetteville, says he isn’t trying to chart a certain number of stations or electric vehicles across the state.“The market will decide that,” he said.

‘Station owners … should be able to sell the commodity they’re providing to consumers.’

But Szoka wants to ensure the private market is allowed to provide a service that might otherwise fall to government. “Free markets work really well,” the lawmaker said at a recent cleantech conference. “Sometimes they need tweaks here and there.”

To help solve this dilemma, utilities and local governments statewide have begun investing in charging stations, many of them free or low-cost, particularly in far-flung rural areas where electric vehicle drivers might otherwise fear to venture. Companies like EVgo — which advertises the nation’s largest public network of fast-charging stations — also run stations that require payment.

But though North Carolina’s electric vehicle market is growing rapidly, it’s still less than half the national average, with about one plug-in for every 1,000 people. According to federal government data, the state has 565 public charging stations — one outlet for roughly every seven cars. Experts say the ideal ratio is 1-to-5.

‘Our monthly revenue … is always a mystery’

One economic hurdle facing charging stations is the recovery of operating costs. Station managers buy electricity from the utility by the kilowatt-hour, but sell the electricity in time increments, regardless of how quickly a vehicle battery gains its charge.

“Every electric vehicle model consumes electricity at a different rate,” said Stan Cross, CEO and co-founder of Asheville-based Brightfield Transportation Solutions. “So, when a Tesla and a [Nissan] Leaf pull up to a charging station, and both plug in with a time-based pricing model, the Tesla driver will pay less and the Leaf driver more for the same amount of electricity delivered.”

For the most part, companies like Brightfield and the much larger ChargePoint sell their North Carolina facilities to commercial customers who aren’t trying to profit from electric vehicle charging per se. Instead the stations serve as a sort of loss leader — enticing students to enroll at a university, employees to work at a particular company, or shoppers to visit a commercial district.

Selling kilowatt-hours, however, could get Brightfield closer to making money on the 28 stations it does own and operate, Cross said, by taking one variable out of a business model already wrought with variables. Right now, he said, “our monthly revenue from our stations is always a mystery, because we don’t know how fast the electrons are going to go through the system.”

Brightfield’s niche is canopied charging outlets with grid-connected solar arrays and batteries. The legislation wouldn’t allow the company to disconnect from the grid and sell its own electricity, but that isn’t the company’s aim anyway.

“If a bunch of cars come and suck the energy out of the battery, or if we get three cloudy days, or whatever,” Cross said, “then drivers aren’t going to have that reliability that a grid-connected system will offer them. We’ll always grid connect for that reason.”

The by-the-minute approach works fine for now at EVgo stations, said Marcy Bauer, the North Carolina-based director of program operations, since the company’s business model depends on customers not lingering at outlets. But that could change in the future, she said, and her company favors “any opportunity to support the competitive market for EV charging.”

Plus, at least 23 states and the District of Columbia already allow per-kilowatt-hour sales from charging stations, and there could soon be a federal effort to standardize the practice across the country.

“It’s going to come up at some point,” Bauer said. “Any state that hasn’t already adopted this exemption for electric vehicle charging — they’re just going to be scrambling later.” 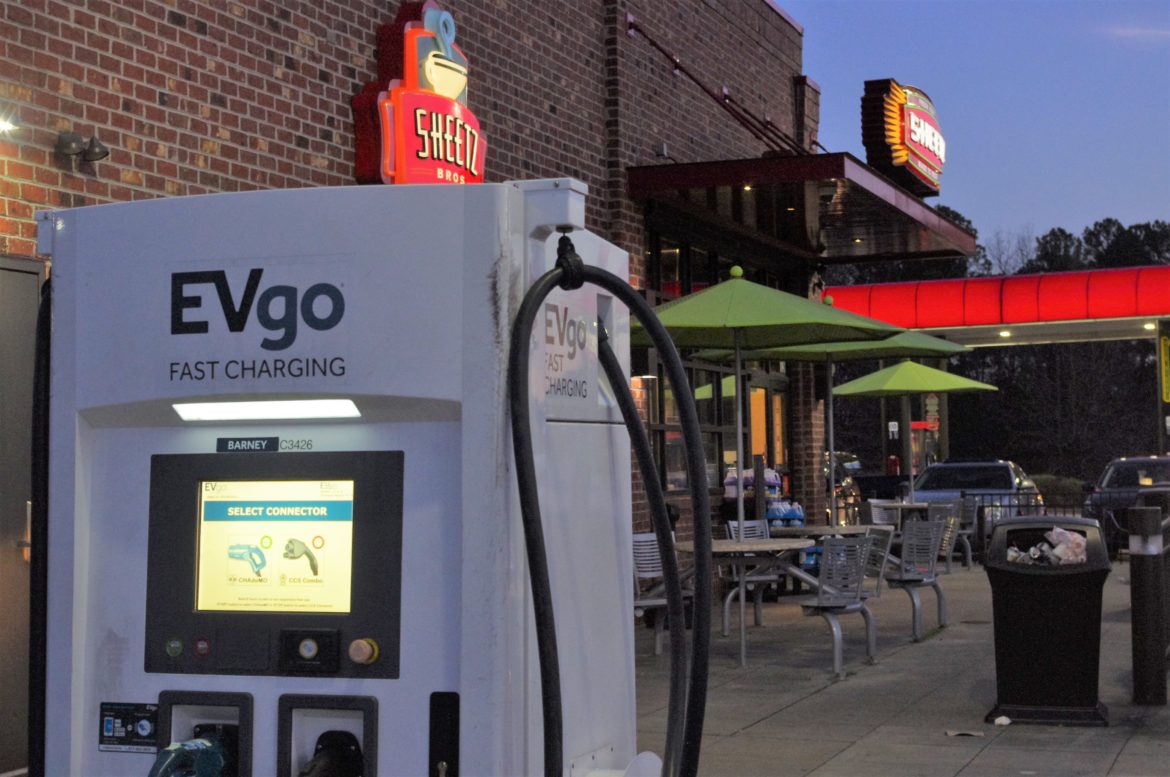 A charging station outside the Raleigh-Durham International Airport in North Carolina.

A lead sponsor of a sweeping 2017 law to double solar energy in the state, Szoka is an unabashed proponent of renewable energy. But he’s wary of devoting public dollars to services he believes the free market could provide. That’s why he wants to move his bill before the state starts using its share of Volkswagen settlement funds.

“I’m eager to get the bill passed and signed,” he said, “so that one of the ideas [for the VW money] isn’t government should subsidize electric vehicles by government buying charging stations, and government providing free electricity. I want to take that one off the table.”

From almost the moment the automaker agreed to pay billions for cheating on tailpipe pollution tests, the VW funds have been a source of contention between Gov. Roy Cooper, a Democrat, and the GOP-controlled legislature.

Whether the worst of those fears come true remains to be seen. At a minimum, the budget language helped push back the Cooper administration’s timeline for awarding the first phase of VW grants, from the spring to the fall of this year.

Still, neither Szoka nor any legislative leaders have publicly criticized Cooper’s plan for the money, which includes devoting 15 percent of funds, the maximum allowed, for electric vehicle charging infrastructure. But Szoka believes those funds are best used for charging stations on government property — not on private land.

“Some of the state parks — it might be a good use of money to put charging stations there, because we want people to come to state parks,” Szoka said. “I would hope we wouldn’t give the electricity away for free, but have people pay for it. Particularly in some of the more remote state parks, I think that’s a great idea.”

In fact, no matter where VW-funded stations are located, the pot of money from the settlement won’t be big enough to cover their operations. That’s why charging station owners say they need new strategies to earn a profit, or at least recover their electricity costs.

“Station owners, whether they’re a large nationwide provider or a small regional outfit like Brightfield,” Cross said, “should be able to sell the commodity they’re providing to consumers.”

By most measures, the legislation’s prospects are good. Szoka co-chairs the energy committee where the bill will be debated first; the other committee chair, Rep. Dean Arp of Union County, is also a primary sponsor. According to Szoka’s office, utilities including Duke Energy and the rural electric cooperatives aren’t against the measure, leaving no known opponents.

But Szoka and the bill’s backers aren’t selling it as a panacea. “It’s a small but important step,” Szoka said.

“We need a lot of things to shorten the runway,” to widespread electric vehicle deployment, Bauer said. Szoka’s bill “is one more necessary move.”