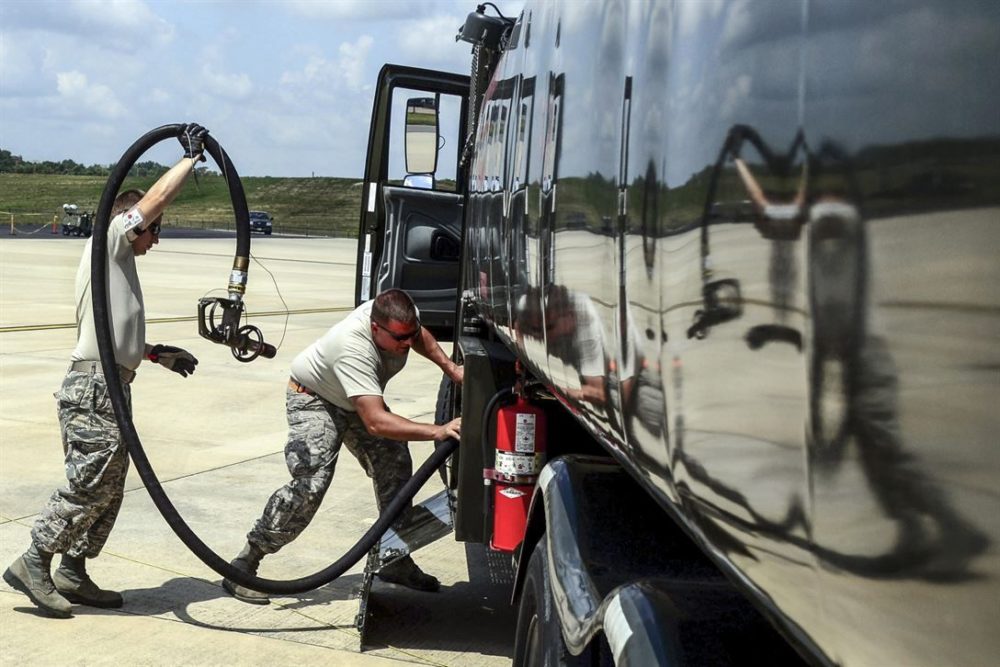 Data from a new report reveals a decline in veterans working in the renewable energy and energy efficiency sector.

The U.S. military is the single largest consumer of energy resources in the world with bases, ships, aircraft and vehicles operating 24/7 around the globe. Soldiers, sailors, airmen, and marines of all ranks are responsible for the day-to-day operation of the energy systems that power the mission at home and abroad. This technical experience combined with other crucial skills like teamwork, leadership, critical thinking, and problem solving make veterans ideal for careers in fast changing energy markets.

The 2019 U.S. Energy and Employment Report (USEER) was released last week by the Energy Futures Initiative (EFI), a not-for-profit think tank led by former Secretary of Energy Ernest Moniz. USEER provides detailed insights into the energy industry through employment data collected from approximately 30,000 employers. This is the 4th annual edition of the report which started as a project within the U.S. Department of Energy back in 2016. The work is now performed in a partnership between EFI and the National Association of State Energy Officials (NASEO).

Military veteran employment in the various sectors of the energy industry is one of the many data points that the report has tracked since inception. With four years of data now available, it is possible to do some high-level analysis of trends.

Veteran jobs in energy are declining as industry grows

According to the new report, veterans comprise 9% of all U.S. energy jobs today — higher than the national average of 6% for veterans in the workforce. However, data from past reports, as shown in Figure 1, tells us that the percentage of jobs held by veterans in the energy industry has declined over time. This is happening because the number of veterans in energy has remained about the same as the energy industry has grown. In 2018, there were 150,000 more energy jobs than the year before but 6,000 fewer veterans employed in the industry. 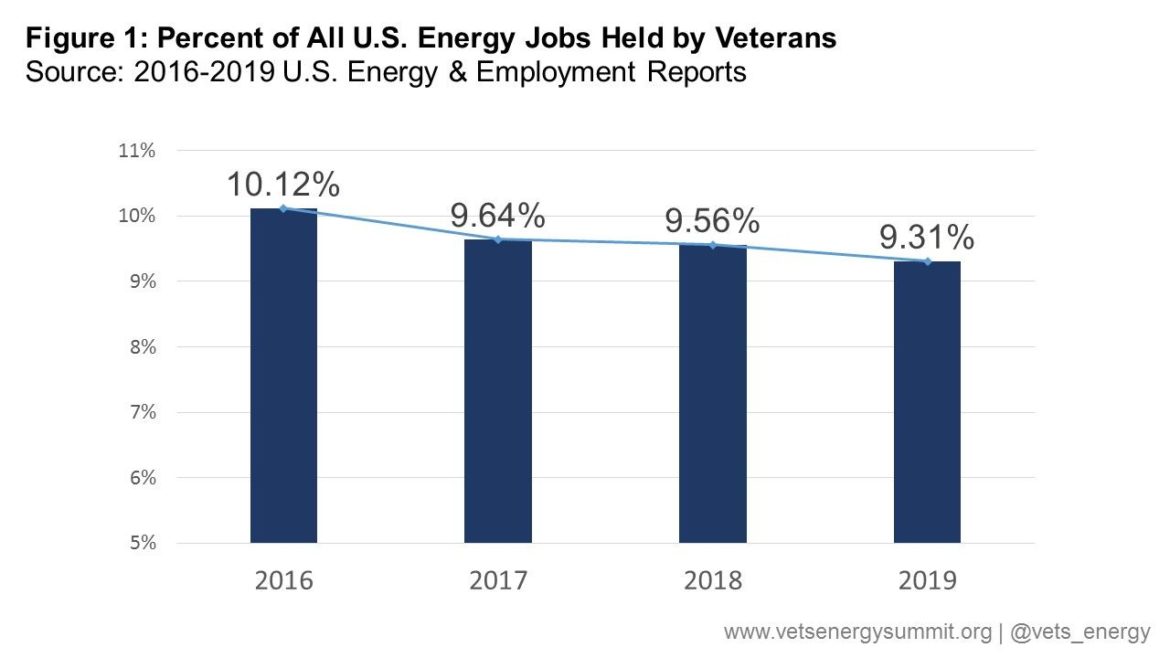 The 755,000 veterans working in energy today are categorized by the report in five sectors, as shown in Figure 2. Veterans in energy represent about 7.5% of all veterans employed in the United States as tracked by the U.S. Department of Labor. The majority of energy jobs were related to energy efficiency and motor vehicles. The remainder were more traditional energy jobs in fuels, generation, transmission, distribution and storage (TDS). 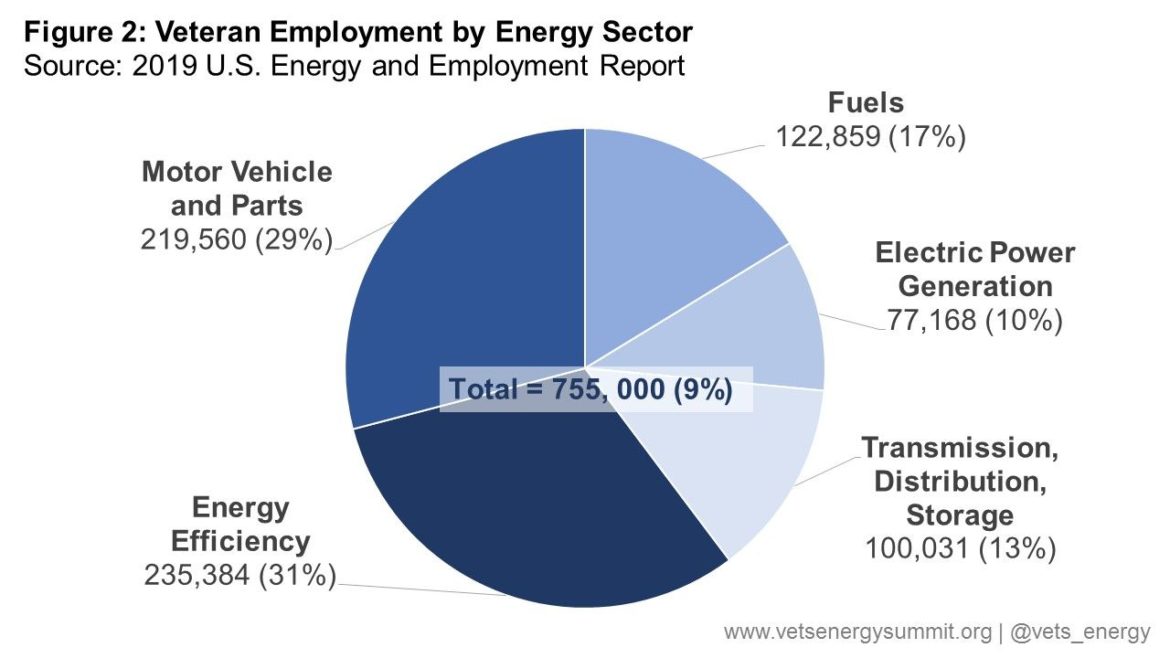 Within the five sectors, veteran employment in the petroleum, nuclear, and natural gas generation subsectors increased while declining across all other categories. In 2018, the fuel sector added 20,000 new veteran jobs. That growth can be partially attributed to an additional 93,000 jobs in the petroleum industry of which 5,000 went to veterans. A new category in the 2019 report called “Other Fuels,” which includes fossil fuels, biofuels, and jobs across multiple technologies, appears to account for the remainder of new jobs.

Electric power generation jobs shrunk by 1% across the country in 2018. Veterans were hit particularly hard with 10% or 8,000 fewer jobs than the year before. These losses can be partially attributed to the solar and hydro subsectors. There were nearly 15,000 fewer solar jobs in 2018 of which 3,400 were once held by veterans. The shrinking hydro subsector lost another 2,100 jobs once filled by veterans, a 26% reduction. The whole wind industry added 3,700 jobs in 2018 but there was very little change in the number of veterans employed. Meanwhile, natural gas and nuclear generation added 1,000 jobs for veterans.

Some of the biggest changes occurred in the motor vehicle sector. Since 2016, the motor vehicle and parts sector added over 100,000 jobs across the country, but the number of veterans fell by about 50,000 jobs over the same period. The energy efficiency sector has also grown over the years and added 100,000 jobs in the last year alone. While veterans were a growing percentage of that sector in 2016 and 2017, there were 3,000 fewer energy efficiency jobs held by veterans in 2018. Similarly, 3,700 fewer veterans were employed in the transmission, distribution, and storage (TDS) sector. 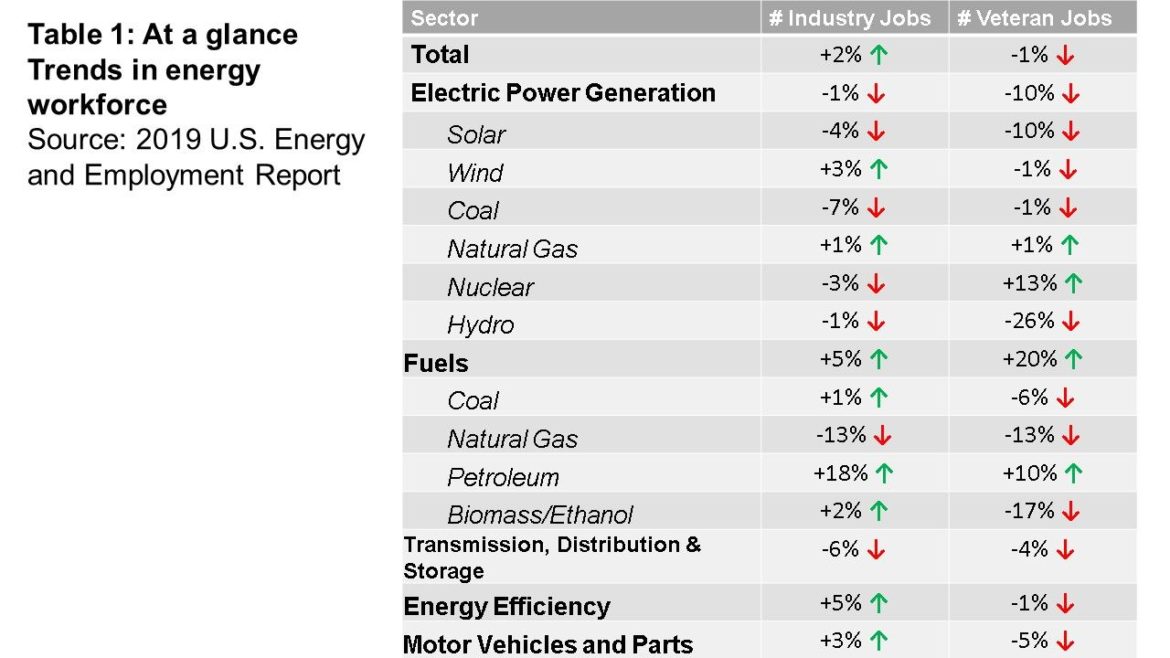 There are several possible explanations for these effects. The experience that veterans gain in the military is often related to petroleum or nuclear and rarely with renewables. The companies in oil, gas, and nuclear tend to be bigger compared to the smaller and medium sized companies within the renewable industry. Veterans are naturally more familiar with big companies and may be attracted to similarities with the military culture. Location is another possibility: the state of Texas dominates the oil and gas industry with nearly 2 million employees and also ranks second in the country for veteran population with 1.6 million in residence.

In addition to employment data, USEER also asked employers about hiring and projections. All five sectors projected job growth in 2019, but 77% of companies reported difficulty in hiring qualified employees. Lack of experience, training, and technical skills were the most cited reasons for the difficulty. The report states the need for more workforce training, certifications, and closer coordination between workforce training programs and employers.

Veterans are uniquely situated to help fill this employment gap. Military service gives veterans technical experience and knowledge in energy systems that are directly applicable to energy jobs. Veterans also bring a suite of soft skills as a result of their military training and work in high stress situations.

The transition to a civilian career still has its challenges. Reaching veterans and connecting them with available jobs is the first step. Hiring managers also need training to understand military skills, and veterans need help to communicate their abilities effectively. Skills may be the building blocks to a successful career, but the lack of specific civilian experience or failure to meet education requirements can still be a barrier. Industry recognized certification programs could help connect recruiters with candidates and bridge the gap between a veterans’ military qualifications and the specific needs of a company.

Once hired, military veterans report higher than average levels of underemployment — being underutilized, overqualified, or unfulfilled. Here too the energy industry provides an avenue to attract and retain veterans. Veterans are service-oriented, crave a mission purpose that they believe in, and want to belong to something bigger than themselves. The fracking boom made the U.S. a net exporter of natural gas, but there is a lot more work to make our energy systems more independent and resilient. Advancing technology to make energy generation more efficient, adopting advanced energy systems, and reducing energy demand enhances national security by diversifying our energy portfolio and reducing dependence on foreign fuels. That is a mission veterans can feel good about.