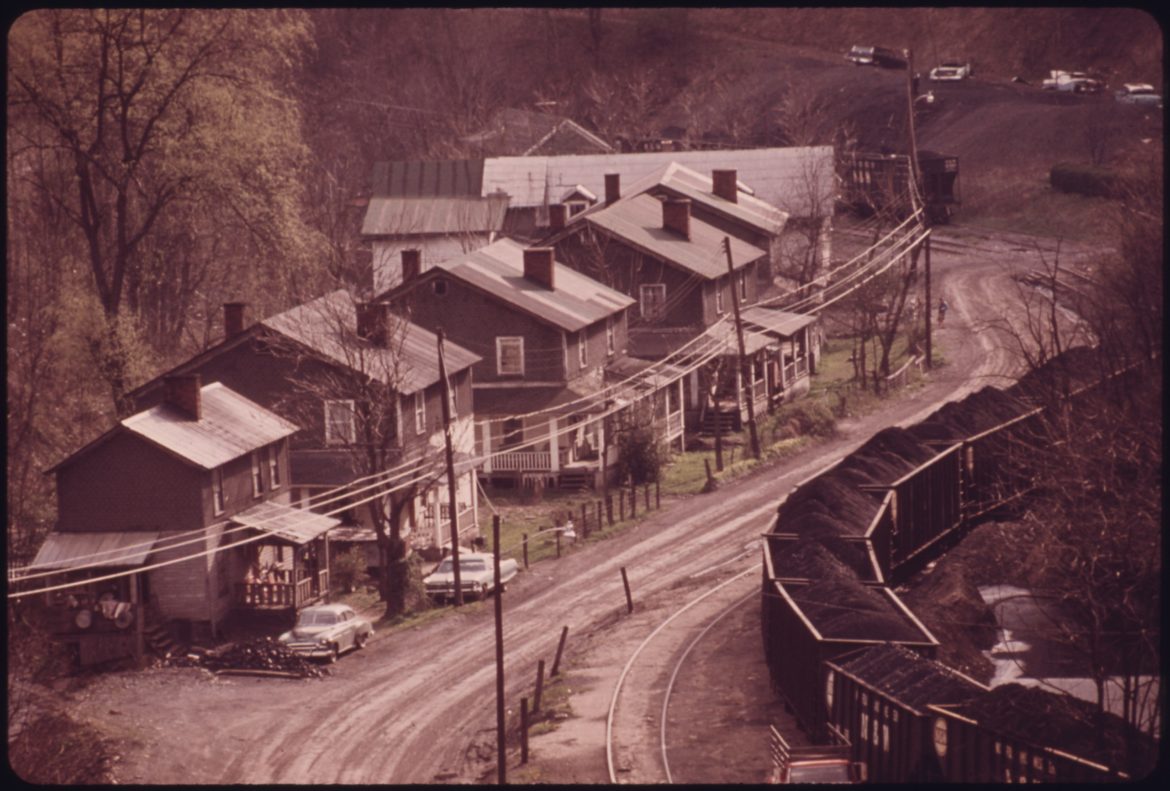 Coal travels through the mining town of Red Ash, Virginia, in April 1974. Southwest Virginia's Tazewell County is one of two potential sites for a Dominion Energy pumped-storage hydro project.

A bill awaiting the governor’s signature would create a state authority to win grants and other research funding.

Correction: Dominion Energy is considering a pumped-storage hydropower facility in Tazewell County that would draw water from an abandoned underground mine, but the reservoir would be created on Clinch Mountain by damming streams. A previous version of this story incorrectly described the site.

Southwest Virginia lawmakers are looking to pumped-storage hydro and renewables to make the state’s coalfields an energy hotbed again.

The General Assembly approved a bill this month to create a state authority that could win grants and other funding to fuel energy technology research and development. The legislation, which still awaits signature by Gov. Ralph Northam, carries no funding mechanism but erects a structure for the state to support an array of research and development activities in the coalfields.

The legislation specifically names as priorities pumped-storage hydropower — a clear reference to Dominion Energy’s plans to build such a facility either in Tazewell or Wise counties — as well as the development of renewable energy generation on brownfield sites, including abandoned mines. The bill also directs the authority to support workforce training and development of a Southwest Virginia Energy Park.

Del. Terry Kilgore, R-Lee County, a 25-year lawmaker who represents the far southwestern corner of the state and chairs the powerful House Commerce and Labor Committee, carried the bill with Sen. Ben Chafin, R-Russell County, largely in response to Dominion’s plans to build a pumped-storage facility in the region.

“We’ve met with different folks from utilities to talk about the possibility of an energy research center,” Kilgore said. “We need bigger, better batteries for renewable energies. We want to look at what graphene can do, using some of our coal. There are a lot of U.S. Department of Energy grants out there, and companies like Dominion and [American Electric Power] are spending money on research. Why not spend it in Southwest Virginia near a pumped-storage facility, near coal, near natural gas and hopefully solar and wind projects?”

According to the U.S. Bureau of Labor Statistics, the number of coal and logging jobs has fallen by nearly half in Virginia over the last three decades — a slower pace than a national decline of 83 percent in coal jobs, but still enough to dramatically reduce the coal industry’s footprint in the region. The region’s lawmakers clearly are looking for a path forward.

“For years and years in Southwest Virginia, energy was coal, and that’s it,” said Del. Israel O’Quinn, R-Bristol. “And coal is going to continue to play a big part in the energy mix, but energy means a whole lot of different things. To create a talent pipeline in that part of the state would be a great way for people I went to school with to stay in the area.”

“Energy has long been a major industry in our area, and with our abundant natural resources, there is no reason why it can’t be adapted for incorporation into America’s energy future,” Griffith wrote. “The economy of the 21st century can take root right here, encouraged by the hard-working people, low cost of living, and access to key transportation routes that our region provides.”

In a phone interview, Griffith endorsed the state legislation creating the authority. He said the potential for pumped-storage and renewable energy on former surface mines “make us an area where [research and development] is possible. What Terry’s trying to do is great. If it works with the federal government, it’s a win-win.”

‘It’s a good sign that they’re recognizing coal jobs are not coming back, and they’ve got to find some new ways of employing people.’

Lawmakers have tried a version of this previously. In the mid-‘00s, the Virginia Tobacco Region Revitalization Commission — a group set up to spend proceeds from the national tobacco settlement for economic development projects in tobacco-dependent communities — funded the construction of the Southwest Virginia Clean Energy Research & Development Center in Abingdon. The center opened in 2014 but was never used.

“The foundation was never able to secure clients for the R&D center, so a long-term lease was signed with a local doctor,” said David Matlock of the Southwest Virginia Higher Education Center. “It’s now leased for a regional orthopedic surgery center.”

The difference this time, lawmakers hope, is Dominion’s stated plans to build a $2 billion pumped-storage project at a former mine, either in Tazewell County or Wise County. David Botkins, a spokesman for Dominion Energy, responded to questions about the status of the project by pointing to a story in the Bluefield Daily Telegraph that says preliminary work by the utility at each site will pay out through the warm months of 2019. Greg Edwards, external affairs representative for Dominion, told the Daily Telegraph that the utility will make a decision toward the end of 2019.

Kilgore said that Dominion assured the regional delegation that it will follow through on its plans.

“Believe you me, we are pushing them,” Kilgore said.

Botkins said Dominion supported the legislation to create the research and development authority.

Appalachian Power spokesman John Shepelwich similarly said the utility hopes the authority pays off with projects that will benefit its customers.

“Certainly Appalachian Power would be hopeful that this authority would help to create some economic development opportunities for Southwest Virginia, and we would certainly assist that in any way we could.”

Ivy Main, a lawyer and a longtime volunteer with the Sierra Club’s Virginia chapter, said she doesn’t see any obvious downside to the establishment of an energy research and development authority — especially given the economic hole left by the coal industry’s decline.

“My feeling is when you’ve got a serious problem of an industry going away — and it needs to go away — but you’ve got these displaced workers, you’ve got to do something,” Main said. “There is kind of a ‘try everything’ response to that. I would be disappointed if this turned out to be just a way to get funding for pet projects that don’t create real employment, but if they can attract funding and develop some good projects, that would be a success.”

Main complained that Kilgore and other regional lawmakers continue to fall in line with utilities’ efforts to block third-party purchase agreements and other policies that would hasten the transition to clean energy.

Even still, she acknowledged progress. Southwest Virginia lawmakers have historically acted to block anything that might challenge coal’s dominance, Main said. But now that Appalachian Power and other utilities around the state and country are explicitly moving away from coal, legislators are finally starting to come around on backing policies that might result in an economic transition.

“We have an urgent need for another economic model in Southwest Virginia,” Main said. “These same people have been dragging their heels and preventing a transition for so long. It’s a good sign that they’re recognizing coal jobs are not coming back, and they’ve got to find some new ways of employing people. If they can start building some green jobs and actually transitioning coal workers to clean energy jobs, I think that’s what we’d be looking for. If that happens, then what they’ve done will be useful.”