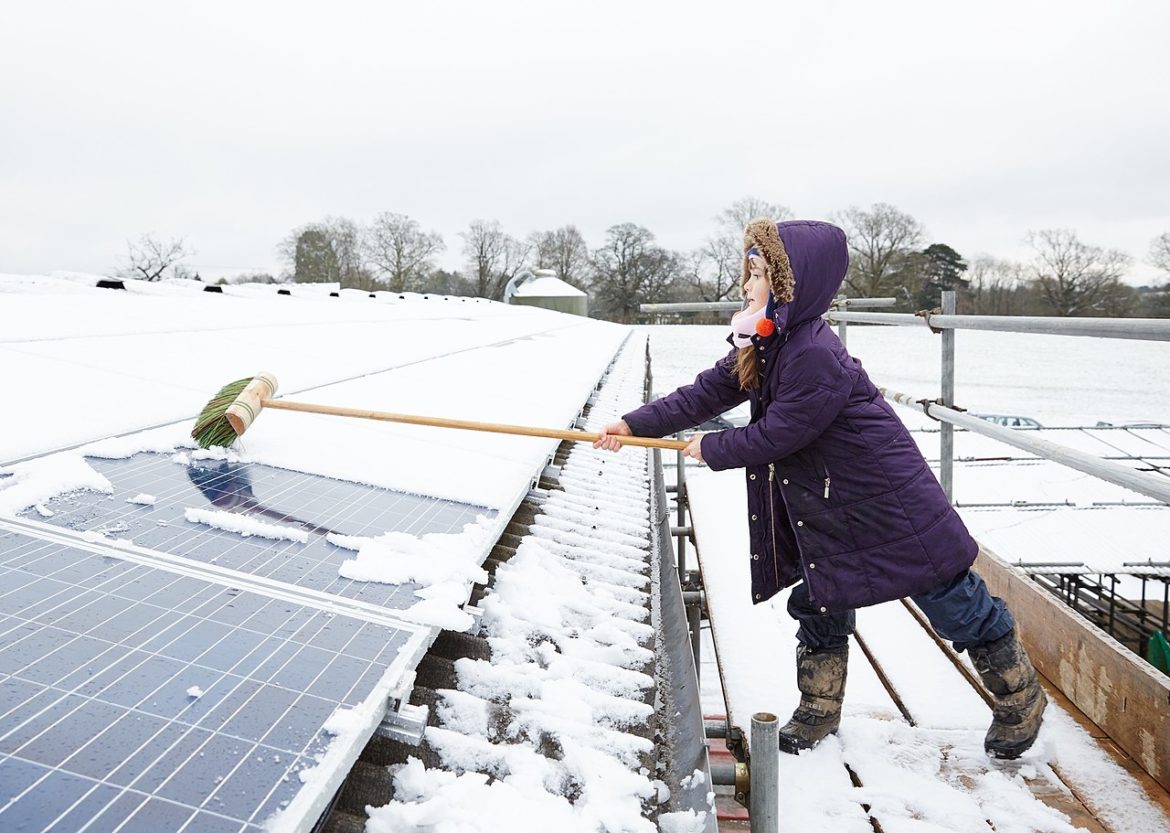 A young girl brushes snow from a set of solar panels in West Sussex, England. In Minnesota, a solar developer said paying people to clear snow from a Waterville community solar project is simply too expensive. But even in Minnesota, he said, it rarely takes more than a few days for the panels to clear on their own.

Snow can temporarily slow solar panel output, but the impact tends to be small and short-lived, a developer says.

On the day Minnesota Gov. Tim Walz announced a goal of powering his state entirely by renewable electricity by 2050, a rural Republican legislator threw snow on the proposal in a Facebook post.

Rep. Jeremy Munson’s photograph of snow-covered solar panels was accompanied by a pointed a rebuke of Walz’s vision: “On my commute to the Capitol this morning, I saw the $10 million industrial solar array in Waterville is still covered with snow and ice. Walz announced his 100% renewable energy mandate today. Anyone see a problem here?”

It's a beautiful, sunny day in MN! On my commute to the Capitol this morning, I saw the $10 million industrial solar…

Turns out, not everyone does. The developer of the Waterville project and federal government studies both say snow hampers solar production but does not stop it, nor does it create a winter-long production hindrance.

Munson’s post drew more than 250 comments from people who mainly agree with his dim view of solar energy and see it as expensive and unreliable. The developer behind the 6.6-megawatt Waterville community solar garden that opened last year sharply disagrees, while conceding that snowy days result in less energy.

Ralph Jacobson, founder of IPS Solar, said snow “does fill up on solar collectors” during the winter. Paying people to clean off panels is simply too expensive, he said, especially at farms such as Waterville, where thousands are spread over acres of land.

Snow removal without human intervention can sometimes be achieved by single access tracker panels that offer operators the ability to shift the tilt to optimize performance, Jacobson said. But those cost more than the traditional fixed panels used in the Waterville project.

The tilt of panels plays a role in snow capture. The Waterville project’s fixed, low pitch panels work well in the warmer half of year because they pick up light for longer periods.

“There’s a tradeoff — you lose production with a shallower pitch in winter, but then more than make up for it in summer,” Jacobson said.

Favorable weather helps remove snow. Warm winter days thaw out panels and windy days often blow snow off, Jacobson said. Even in Minnesota it rarely takes more than a few days, or a few hours, for the panels to clear, he said.

The U.S. Department of Energy’s Office of Energy Efficiency & Renewable Energy reported in 2017 that a light dusting of snow has little impact on solar production. Heavier snow reduces but does not eliminate generation and when it slides or melts away “power generation is able to occur again.”

Snow on panels offers advantages and disadvantages. Charlie Gay, director of the Solar Energy Technologies Office, wrote in an article on the DOE’s website that snow can clean debris off panels because it bonds with dirt and carries it away when melting occurs. Snow also adds weight to panels and can cause microcracks, especially on panels enclosed in frames, the most widely available modules today.

The office has 13 regional research centers, including one in Vermont in a climate not that different from Minnesota. Tests in Vermont show how frameless modules may be more effective in removing snow because it can slide off without any hindrances.

Jacobson does not think much about snow on panels at a time when clean energy continues to grow in Minnesota and the problem remains minimal.