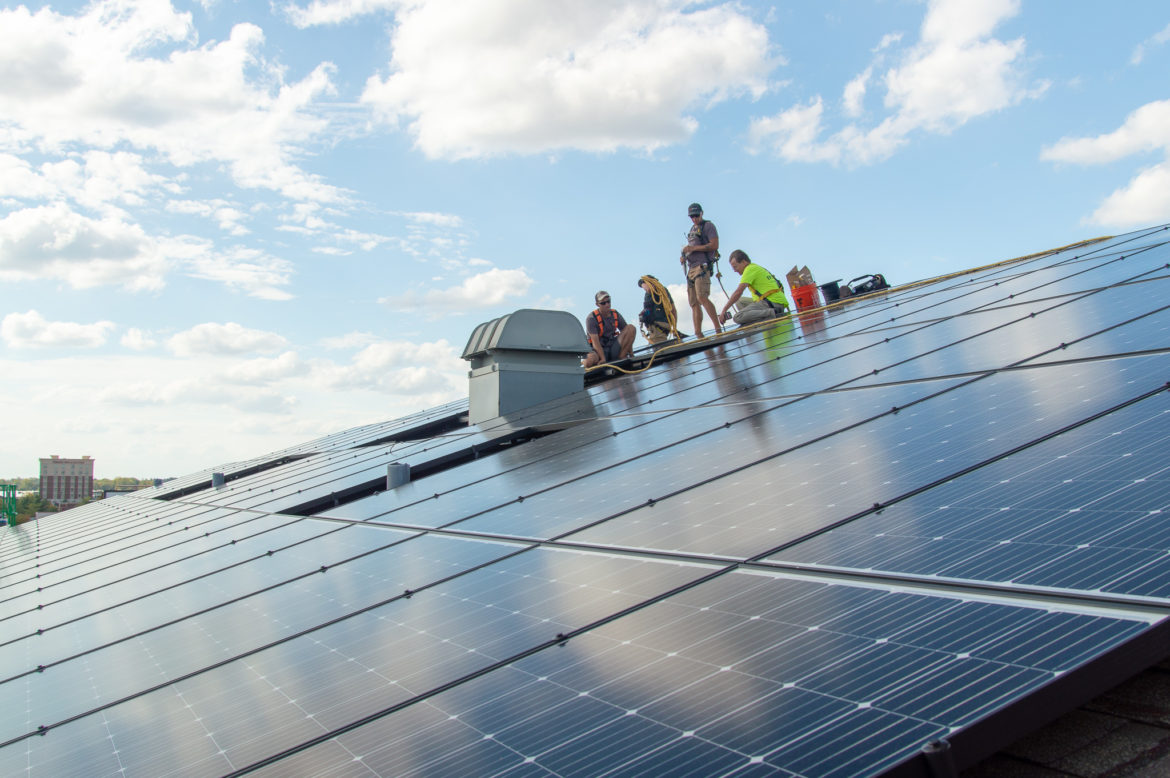 The Path to 100 bill would boost the state’s renewable standard and let utilities raise rates to pay for projects.

Correction: Acciona is the owner-operator of one wind farm in Illinois. An earlier version of this story misstated the number of projects it has in the state.

The Path to 100 bill, as it is known, would increase the state’s renewable portfolio standard to almost 40 percent renewables by 2030, up from 25 percent by 2025. It’s meant to encourage the development of utility-scale solar and wind energy and avoid an expected “cliff” in solar development; funds are expected to run out this year in light of a glut of projects seeking incentives that were created by the 2016 Future Energy Jobs Act.

The ultimate goal, backers say, is to transition Illinois to 100 percent renewables, an aim stated by new Gov. J.B. Pritzker. Despite a recent boom in solar development, experts say the state is not on track to meet even the existing renewable standard.

“Right now we have a goal that isn’t matched by the funding,” said Solar Energy Industries Association (SEIA) vice president of state affairs Sean Gallagher. “We’ve got a mismatch. What we want to do is enable the state to meet its targets, and increase the target according to the governor’s goal.”

The new bill (HB2966/ SB1781) would raise a cap on the amount utilities can increase rates to pay for renewable energy. Currently the cap stands at 2 percent of a bill, but it could go up to 4 percent. The change is modeled on how the Future Energy Jobs Act provided for ratcheting up the 2 percent cap on rate increases for energy efficiency.

Backers say that over 20 years, the bill would create an estimated 21,000 new jobs, $2.8 billion in new property taxes from renewable energy developments, and $1.95 billion in payments to landowners where wind and solar is built. Major national wind and solar developers are backing the bill, along with labor unions and the Chicago Urban League.

The international renewable energy developer Acciona, for example, which has U.S. headquarters in Chicago but only one renewable energy project — a wind farm — in Illinois, would likely build several large projects if the bill is passed, according to spokesman David Jakubiak.

“In the wake of the excitement over the Future Energy Jobs Act, Illinois became extremely competitive,” Jakubiak said. “But if you see us going over the cliff [with incentives disappearing], you could see things going in the opposite direction.”

He said time is of the essence since other states are also looking to attract developers, and developers are looking to commit soon. “These projects are going to be built, and we would love to be building in our own backyard,” he said.

The bill is being considered simultaneously with another energy bill introduced Feb. 28 that aims to increase access to renewable energy development and jobs for underserved communities, bolstering the environmental justice impacts of a renewable energy shift. Backers of the Path to 100 bill described it as complementary to that bill, known as the Clean Energy Jobs Act.

Both bills are meant to address glitches in how the Future Energy Jobs Act has played out, including a long waiting list for community solar and distributed rooftop solar projects seeking to receive renewable energy credits under the state’s adjustable block program.

The program calls for credits to be sold from about 165 MW of community solar statewide, and there are about 1,800 MW worth of projects that are seeking to be included. The program for large distributed generation projects, ranging from 10 to 2,000 kilowatts, is similarly overburdened.

Under the current adjustable block program, solar developers “go and sign up customers whether its community solar or behind the meter, and once you have those customers signed on you go out and see if they can get in program,” explained clean energy consultant Peter Gray. But because of “all this pent up demand” for solar development that built up while the state’s renewable portfolio standard was “broken” and not incentivizing development, there’s not enough room in the adjustable block program for all the projects that have applied.

Proponents of the Path to 100 bill said there has not been an analysis of how much rates might rise because of increased payments for renewable energy, but they added that more renewable energy could, in the long run, be cheaper and more efficient, leading to rate savings down the line.

Delay in the interconnection process has complicated the future of an ambitious community solar project in the works by Environmental Defenders of McHenry County, a nonprofit organization in the county north of Chicago.

The group is planning a 600-kilowatt community solar project on land they obtained with a grant and will seed with native pollinator-friendly plants. The community solar project is 80 percent subscribed, according to organization director Cynthia Kanner, with mostly residents like her — she was unable to install solar on her home because of oak trees shading the roof. The group plans to use the community solar installation as a site for school field trips and education about renewable energy and native plants.

Because of the slow interconnection process with utility ComEd, the project wasn’t able to enter the lottery held for community solar participation in the adjustable block grant program. Kanner is still hopeful they will be able to participate in the next round of the adjustable block grant program, but she hopes they and other nonprofits doing community solar will not have to scramble to piece together hundreds of thousands of dollars from multiple grants and other sources.

“It’s got to happen,” she said. “It’s just so unique, it’s going to be a really special small project, totally residential, and an educational destination. We can be a model for others on how you do it in an environmentally friendly way.”

Paul McKnight, CEO of EFS Energy in downstate Illinois, saw his business grow significantly in the past two years since the Future Energy Jobs Act passed. He lined up a raft of commercial and residential solar projects and hired more staff, increasing his total employee roster to 19. The business came in large part because he explained to potential customers that they could access renewable energy credits under the 2016 law to make the projects more affordable.

But now McKnight has about 2 megawatts worth of medium-sized projects that were either built and likely won’t receive credits, or are stalled as the availability of credits is highly uncertain especially in the 10- to 2,000-kilowatt “large distributed generation” category of the adjustable block program.

“If those people don’t get drawn in the first lottery [being held to distribute renewable energy credits] they’ll be mad at us for selling them something they won’t get,” McKnight said. “We have a pipeline we’ve been developing for years contemplating this, and people have been rearranging their finances to make this project happen. Now they’re not going to get that value.”

He said he’s stopped encouraging people to go forward with solar projects in hopes of getting the right to sell the credits for the energy they produce.

“Because we’re an ethical company and we’re not going to continue to sell something that doesn’t exist,” he said. “I have a sales team that works on commission, so if big projects in the pipeline don’t go forward, they’re seriously looking at getting another job.”

McKnight doesn’t blame the drafters of the Future Energy Jobs Act, who couldn’t predict the massive popularity of the credit program, he said.

“It was just the overwhelming demand created that overwhelmed the program,” he said. “In hindsight you go, ‘Man, we could have started these incentives at half of what we did, and we’d be serving twice as many people and there’d still be demand.’”

Overall he thinks the 2016 law and the hunger for solar incentives are a good sign for the state.

“It’s really good to have this demand because overall it’s what is going to allow the state to achieve [the renewable portfolio standard],” he said. “I think it’s pretty amazing that individuals and homeowners and business owners are willing to invest their own money to build energy infrastructure.”