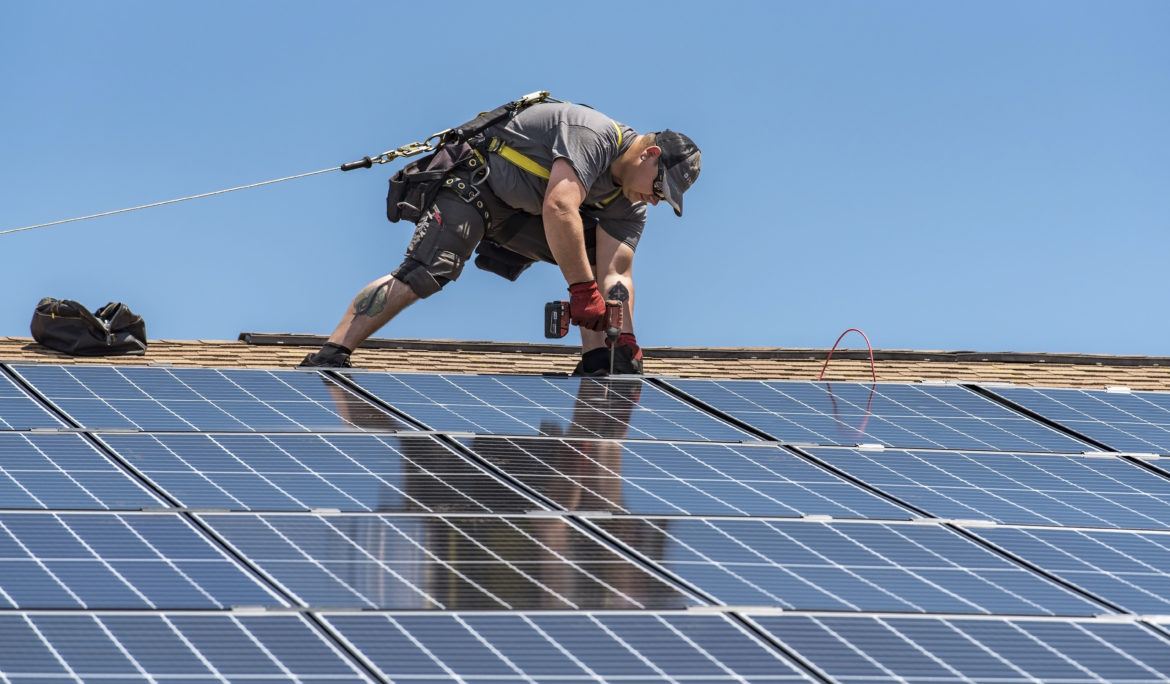 A solar installer secures a photovoltaic panel to a roof.

Sunwealth investments include projects on the roofs of low-income residences, nonprofits and houses of worship.

Sunwealth is currently accepting investments in a portfolio of clean energy projects designed to help extend the benefits of solar power to people and institutions that might otherwise be shut out of the market.

“We are attracting new sources of capital based on the premise that you can invest in environmental justice and get market returns or better,” said Sunwealth founder Jon Abe.

Sunwealth was launched in 2014, but its roots stretch back into the 1990s, when Abe saw his first solar panel and “fell in love,” he said, with solar’s potential to make a wide-reaching impact. In the years that followed he worked in renewable energy development in the private sector as well as running Massachusetts’ solar incentive program from 2005 to 2008.

‘We are attracting new sources of capital based on the premise that you can invest in environmental justice and get market returns or better.’

In the early 2000s, Abe said, Massachusetts did a lot of work to get solar panels to people and organizations at all income levels. In 2010, however, the state launched new solar incentives, including rebates and renewable energy credits, which offered paybacks only once a system was up and running.

By 2014, it became clear to Abe that these programs were disproportionately benefiting the middle and upper classes as well as larger businesses — those who had the roofs, the money, and the credit scores to install the panels in the first place. He wondered if there was a creative funding mechanism that could disrupt that pattern.

“You had this huge moral imperative to realign the direction of the solar industry,” Abe said.

The answer he came up with was to create a portfolio of solar projects that carefully and consciously included projects on the roofs of low-income residences, nonprofit organizations, houses of worship, small businesses, schools, and other traditionally underserved populations. The owners of these buildings would not pay for the installation of solar panels; instead, they would receive a monthly lease payment for use of the roof or agree to buy the power produced at rates 15 percent to 30 percent below the default utility price.

Investors, meanwhile, make money through a combination of the sale of the generated power, state incentives, tax benefits, and development fees. The minimum investment is $25,000; the average is about $200,000. Last year’s portfolio received about $10 million in investments. Each portfolio includes a diverse range of project types, mitigating the financial risk for investors.

“We’re getting solar into those places where it otherwise wouldn’t be,” said Jessica Brooks, Sunwealth’s chief development officer. “There’s enough benefit for everyone in this market if you structure your projects the right way.”

Improving access to solar power for people in low-income areas is an important part of fighting climate change for reasons beyond the immediate reduction in emissions, Brooks said. When residents of these neighborhoods see solar panels popping up, it can create a sense of connection between their lives and the clean energy movement that may not have been there before.

“It’s a visual testament to the fact we can all be doing something,” she said. “That goes a real long way to helping folks feel that collective ownership of our clean energy future.”

One of Sunwealth’s earliest rounds of investment funded the installation of solar panels on three churches in low-income neighborhoods of Boston. The churches, all interested in pursuing solar power, banded together, but initially had a hard time convincing investors their project was a good bet.

“It was hard to get investors to get it,” said Rev. Mariama White-Hammond, then minister for ecological justice at Bethel AME Church in Jamaica Plain. “They were used to funding businesses that had a certain kind of bottom line and that bottom line was not God.”

Working with Sunwealth let the churches get their solar projects built, even when changes in state law threatened to derail their progress, White-Hammond said.

Projects like those Sunwealth helps create are important for many reasons, she said. They help residents and nonprofits save money and they send a powerful, tangible signal to the community that environmental action is for everyone. And solar installations can also create opportunities for jobs and job training, giving young people options beyond dead-end jobs or crime, White-Hammond said.

“That actually will help to lift up those communities,” she said.

For investors, Sunwealth offers a rare proposition, said Karin Chamberlain, director of impact investing for Clean Yield, a Vermont-based investment advisory firm. Investors interested in renewable energy traditionally had to choose between large companies doing a lot more than green power or smaller, more focused companies that came with a lot of risk.

Sunwealth, however, is exclusively a solar company, but its practice of bundling together diverse solar projects in one investment mitigates some risk. And Sunwealth’s risk profile, liquidity, relatively simple structure, and potential for income generation have proven appealing to Clean Yield clients: Last year, 16 clients invested a total of $600,000.

“The bonus about Sunwealth is that there’s a social justice aspect to it,” Chamberlain said.

For now, Sunwealth’s model seems to be unique, though other companies are experimenting with ways to solve the same problems, Abe said. But Abe isn’t protective of his turf; he wants all the help he can get in the fight against climate change. Trillions of dollars will be needed to address the problem, he said.

“We need a lot of Sunwealths to make that happen,” Abe said. “We welcome the opportunity to be a leader and part of that community.”