Off-grid streetlights installed near Beethoven Elementary School in Chicago's Bronzeville neighborhood are equipped with a small wind turbine, solar panels and batteries to store five nights worth of power.

The 30-foot-tall structures at Beethoven Elementary School and Dunbar Vocational High School draw no power at all from the electric grid. Instead, the off-grid lamps are each equipped with a small wind turbine, solar panels and enough batteries to store five nights worth of power.

One of the 30-foot-tall streetlights stands outside Beethoven Elementary.

ComEd installed the five streetlights in a partnership with a vendor, New York-based Aris Wind. The nearby Illinois Institute of Technology already has seven of the lights, and they’ve also been installed at various places in New York, including two New York City hospitals.

Known as remote power units, the lights aren’t meant to replace traditional streetlights on a large scale. But officials say they can act as a complement to grid-connected lights and can be especially useful during power outages. And they can also serve as power sources themselves. The units are internet-connected and have USB outlets for charging cellphones.

The base cost is $11,000 before shipping and installation.

ComEd views the lights as an opportunity to test their charging patterns and see how they operate on a long-term basis, said Melissa Washington, the utility’s vice president of external affairs. The fact that they’re off-grid could allow greater flexibility in where they’re placed than grid-tied streetlights, she said.

“It’s hard to predict exactly where it’s going,” Washington said. Since the lights use intermittent power sources, they can’t be totally relied upon like grid-tied lights, but they are useful when grid power isn’t available, she said.

The off-grid streetlights “can be selectively applied to provide renewable energy and resiliency where it has the most value,” said Dan Connors, chief operating officer at Aris Wind. He described them as lights with “baby power plants,” which makes them more expensive than traditional streetlights. But they can be especially valuable in the event of power outages and disasters, he said.

Aris is currently working with a city in the greater New York area to evaluate the best places to install the lights so they can serve as emergency meeting stations, Connors said. Additionally, the New York City Health and Hospitals Corporation has installed 11 lights at Brooklyn-based Kings County Hospital, and the company announced in November that it would be installing 22 remote power units on the campus of Jacobi Medical Center in the Bronx, replacing 36 traditional streetlights. 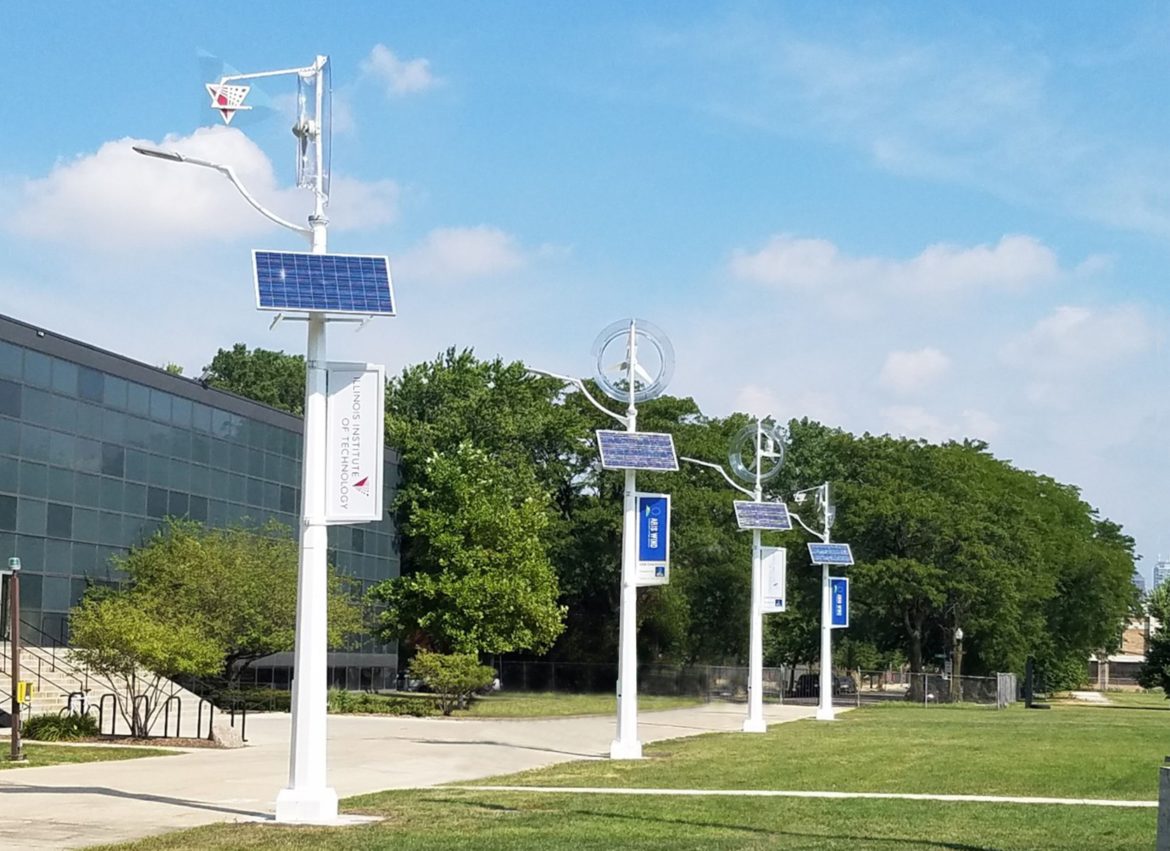 The Illinois Institute of Technology is home to seven of the off-grid streetlights — four of which were donated by Aris. The school later purchased another three.

The expansion of Aris’ work into Chicago came about in 2016, when company leaders met leaders at the Illinois Institute of Technology’s Galvin Center for Electricity Innovation, which developed the university’s microgrid. Aris donated four lights to the school, which later purchased an additional three.

Chicago seemed like fertile ground for the lights in large part because of the city’s ongoing LED lighting upgrade, as well as the presence of ComEd, which Aris executives viewed as a progressive utility and a potential partner in rolling out the lights, Connors said. The utility bought the newest Chicago lights, and Aris coordinated installation on the grounds of the two Bronzeville neighborhood schools, part of the Chicago Public Schools district.

Connors, along with three engineers at Illinois Tech, co-authored a paper in 2017 that examined the progress of the lights on the school’s campus. By varying the brightness at different times of night and dimming the lights overall during winter months, when daylight is limited, operators were able to ensure consistent lighting with minimal problems. The only issue came near the start of the winter, when operators waited too long to dial down the brightness and the lights turned off an hour earlier than they were supposed to because of low power.

According to the paper, this could be solved by adding a learning algorithm to the controller that automatically adjusts the lighting settings based on their generation. The lessons from the Illinois Tech experience have become part of the remote power units’ standard operating strategy, Connors said.

The Illinois Tech paper also raised the possibility of the lights being tied back to the grid to serve as a distributed energy resource. Connors said that while this possibility has been discussed, at the moment the costs of doing so outweigh the amount of energy the lights would provide.

“These more powerful products will initially serve the larger power requirements of 24/7 telecom and security applications,” Connors said. “Conceptually, this could ramp up to the lower end of the [electric] vehicle charging duties, but it will be a step-wise progression through other purposes first.”