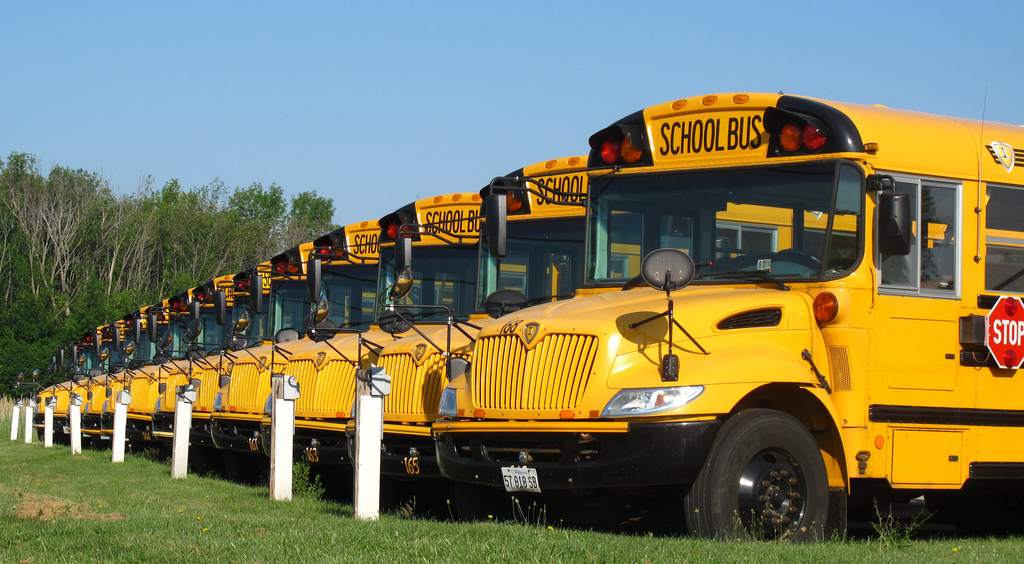 The utility has been hosting webinars and meetings to promote electric school buses and funding opportunities.

An investor-owned utility in Illinois wants to help school districts in its territory begin the transition from diesel to electric school buses.

Ameren Illinois has been co-hosting a series of webinars and in-person meetings aimed at educating district officials in downstate Illinois on the benefits of electric school buses, as well as state funding opportunities.

The Illinois Environmental Protection Agency late last year awarded about $750,000 from the state’s Volkswagen settlement to help Chicago-area schools pay for electric school buses. Ameren and its electrification allies hope schools in the central and southern part of the state will get funding in the next round.

While utilities don’t have a set role when it comes to electric school bus adoption, Ameren Illinois has been especially active in helping district officials and bus companies prepare for electric buses. It’s been working alongside the Environmental Law and Policy Center to promote the transition.

“We think it’s pretty much a no-brainer that Ameren Illinois should be involved in helping the districts” adopt them, said Kristol Simms, Ameren’s director of energy efficiency strategy and innovation.

Experts agree that electric buses offer significant health and environmental benefits for riders. School buses are especially appealing since they have the potential to serve as grid resources when they’re not used, including during hot summer months when air conditioning adds stress to the grid.

But they have a very low presence in the Midwest, so much of the work by advocates over the past several years has simply focused on making superintendents and other officials aware of their benefits. On top of that, the buses usually cost at least $300,000, so they can be a hard sell. Diesel buses are typically listed closer to $100,000. The Volkswagen settlement funding is meant to help districts foot the bill.

‘We think it’s pretty much a no-brainer that Ameren Illinois should be involved in helping the districts.’

Ameren has several strategies to bring electric school buses into its Illinois territory, primarily by “serving as a resource connecting school districts with information about the Volkswagen trust funding,” Simms said. Ameren and ELPC have hosted a series of meetings, including an upcoming one in Springfield on April 1, hoping to educate school officials and get them to think seriously about applying for state funding.

The Illinois EPA has dedicated $10.8 million, 10 percent of its total Volkswagen settlement fund, to help purchase electric school buses. This is the largest share of electric school bus allocations compared to neighboring states, said Susan Mudd, a senior policy advocate at ELPC. The first round of funds covered three buses and two chargers in Cook County. That leaves about $10 million left for the state to put toward electric school buses.

It’s not clear yet what regions state officials will include in the next round. But since the U.S. EPA has already prioritized some downstate regions, namely in the East St. Louis area, for air quality improvement measures, it’s possible those areas will also be prioritized for the school bus funding.

“I think this trend of moving forward to electric buses is a phenomenal innovation for transporting students,” said Bob Daiber, regional superintendent of schools in Madison County, across the Mississippi River from St. Louis. Especially for city students, increased air quality would be a major benefit of the buses, Daiber said.

Even though the cost is high, he hopes the Volkswagen funding — and perhaps some outside sponsorships — can foot a significant portion of the bill. He’s currently discussing the possibility of applying for funding with two Madison County school districts, making sure they’ll be technically equipped to manage the buses and install charging facilities. As of now, Daiber said that both of those districts, as well as his own office, will be represented at the upcoming meeting in Springfield.

School districts often contract with outside bus companies, which would then be in charge of applying for funding and acquiring the buses. East St. Louis District 189, for example, contracts with Illinois Central, part of the larger North America Central School Bus company. An East St. Louis district spokesperson said they’d explore the possibility of using electric school buses if the opportunity presents itself.

Springfield Public Schools contracts with First Student, which works with multiple Illinois districts. First Student was one of the two bus companies that received first-round Volkswagen settlement funding for a bus in Chicago-area Cook County. The other company was Cook-Illinois Corporation, which will receive two buses.

In addition to holding meetings like the one in April, which will bring together school districts, at least one bus manufacturer and hopefully an Illinois EPA representative, Ameren can also serve as a “trusted advisor” when it comes to charging the vehicles, Simms said. The utility plans to help school districts assess their facilities and ensure they adopt appropriate charging equipment. Ameren doesn’t have specific manufacturers or vendors in mind, but Simms said they’ll help connect districts with those companies.

This will also be an opportunity for the utility to learn more about the technology, Simms said. Once districts have buses, Ameren hopes to partner with them on projects that will inform the utility on things such as grid load, appropriate rate structures, and customer and rider satisfaction levels.

Discussion of transportation electrification often focuses on making sure the technology reaches underserved communities, which are disproportionately affected by pollution from nitrogen oxide emissions like those of diesel school buses. Electric school buses can be a key way to benefit those communities, which also makes them appealing to Ameren, Simms said.

The company hasn’t focused much yet on the buses’ battery storage potential, she said, adding that buses with vehicle-to-grid capabilities can be much more expensive than standard electric school buses. “Our approach right now is to start with the basic level and learn, and better understand [vehicle-to-grid] capabilities in the future,” she said.

Utilities have been involved in electric school bus deployment at varying levels. Some serve as an educational resource, while others serve as a financial resource. New York-based Consolidated Edison, as part of a pilot program, helped the White Plains school district purchase five buses that will be used for battery storage to help power the grid this summer.

Duke Energy in Indiana, in comments submitted in 2018 to the state Department of Environmental Management, proposed paying up to $120,000 each toward several school buses as part of pilot research projects. A Duke Energy spokesperson wrote in an email that the utility is working with transit authorities in all of its state jurisdictions to support their Volkswagen settlement funding applications.

Mudd noted that ELPC “admire[s] Ameren’s eager actions” to bring electric school buses to Illinois, and that the organization “hope[s] ComEd will soon do the same.”

Some school officials still have questions about how, and whether, the buses work, particularly in cold climates, Mudd said. Operators in states like Minnesota and Massachusetts have reported that the buses work fine, though, and they can serve as examples for people who are uncertain, Mudd said.

“This is, comparatively speaking, a newer technology,” she said. “So people need to see and experience” it. This will be possible as more schools adopt them, which is happening slowly but surely. Minnesota has one already, and the three in the Chicago area will begin operating in the fall, Mudd said.

Michigan, meanwhile, plans to have 20 throughout the state by the time the next school year begins.

Superintendents in the eight Michigan school districts that will receive buses were especially swayed by the idea of using them for educational purposes, said Howard “Mac” Dashney, a senior advisor at the Michigan Association for Pupil Transportation, referring to the buses as “rolling science lab[s].”

School districts were responsible for paying 30 percent of the costs for the $325,000 bus and $5,000 level 2 charging station, Dashney said. The rest of the money comes from the Volkswagen funds. Utilities are assisting the school districts with charging infrastructure installation, and in the future they’ll help prepare educational materials about the buses for students, he said.

To determine the health and environmental impacts of the buses, the Michigan Association for Pupil Transportation hopes to get portable air quality control equipment from the state Department of Environmental Quality to measure emissions in the vicinity of the buses, Dashney said.

Illinois isn’t at that point yet. But Mudd said that when the state EPA announces the next round of funding, she hopes they offer the same informational resources that state officials in Michigan have offered “so that schools and school bus contractors feel more ready” to apply for funding.

Schools have been receptive to the buses so far, she said — not just administrators, but staff, students and parents too. She hopes events like the upcoming meeting bring together officials who are seriously considering moving ahead to adopt the buses.