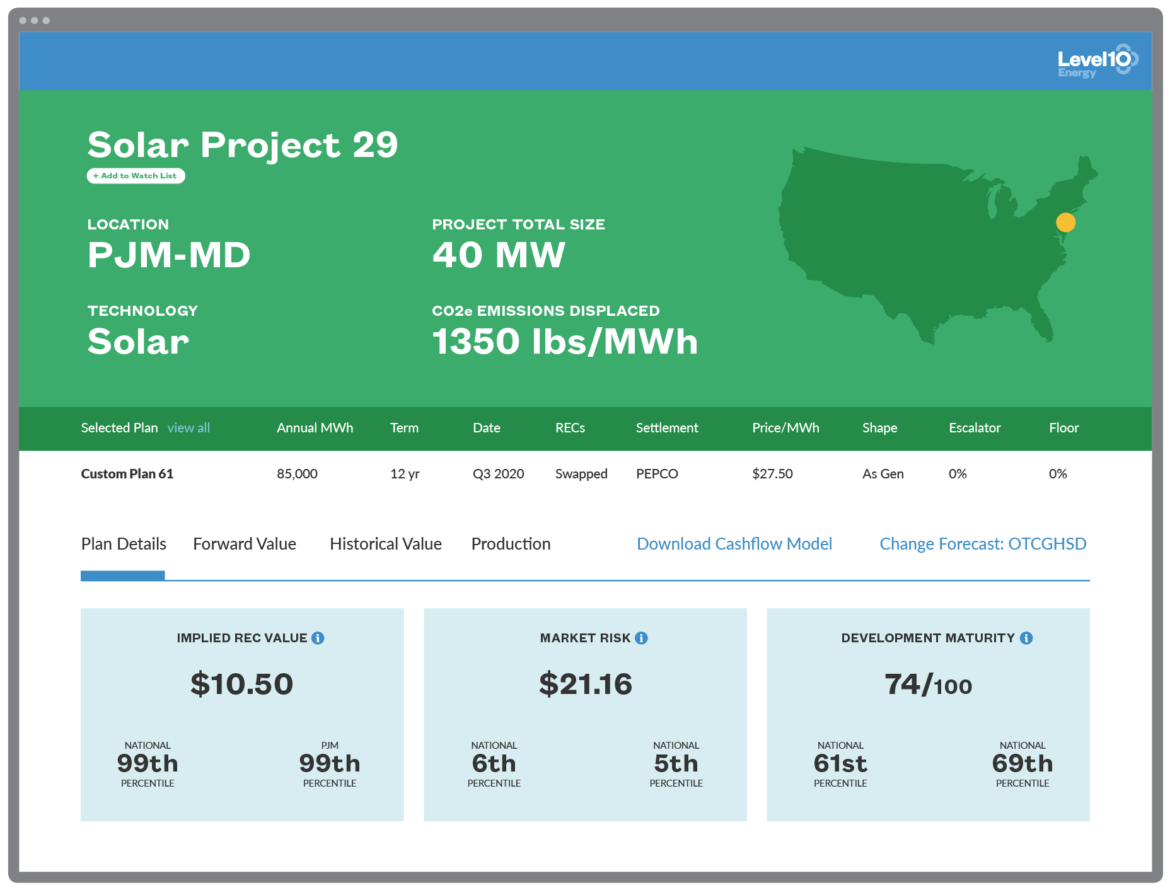 An example of a solar project on the LevelTen marketplace.

A Seattle tech company has created an online marketplace to connect renewable buyers and sellers.

It was a milestone deal, not for its size but for the number of parties. In January, five big companies, each with differing energy requirements and renewable strategies, agreed to pool their investment and collectively purchase 42.5 megawatts from a North Carolina solar project.

The five negotiated individual power purchase agreements, then aggregated their interests to act as the anchor buyer of a large renewable energy project. The novel deal was facilitated with the help of a three-year-old Seattle tech startup called LevelTen Energy that aspires to change how organizations buy renewable power.

Bloomberg, Cox Enterprises, Gap Inc., Salesforce and Workday initially came together in a meeting at a Rocky Mountain Institute conference in Colorado. LevelTen’s market tools made it much easier for the companies to sort through their specific requirements, and for the project developer, BayWa r.e., to meet the price and value requirements of the group.

With $7.3 million in venture capital support and a staff of software, analytical, renewable energy, and big data savants, LevelTen last year established the first national marketplace for buying and selling wind and solar energy. The company also assembled a suite of digital analytic tools that enable renewable developers and buyers to find each other, and more quickly close power purchase agreements for new projects.

‘LevelTen is changing how renewable energy is bought and sold. … They’ve made the market available and transparent for all buyers.’

In a statement, Jam Attari, BayWa’s chief executive, called the five-party agreement “truly a milestone,” and “the right new model for corporate energy procurement.” He commended LevelTen and the five participants “for rethinking how companies of all sizes can access cost-competitive clean energy; this model can be replicated for companies for years to come.”

Patrick Flynn, vice president of sustainability at Salesforce, said the novel agreement “demonstrates a company of any size can play an essential role in transitioning our planet toward a clean energy future.”

For its part, LevelTen gets paid according to a privately held formula tied to the amount of power purchased from a project and the number of services used by clients.

“LevelTen is changing how renewable energy is bought and sold,” said Eric Gimon, a senior fellow at Energy Innovation, a nonprofit renewable energy research and policy group in San Francisco. “It’s like shopping. If you’re wealthy you have a personal shopper who knows all your requirements and your favorite stores and buys what you like. But if you’re like the rest of us, you need a market — a mall with all the stores. You go out and see what you like and try it on. That’s what LevelTen is doing. They’ve made the market available and transparent for all buyers. It’s a pretty big deal.”

Just how big is starting to come into focus on LevelTen’s Marketplace, introduced this year, where 200 renewable energy developers have already listed more than 1,600 projects coast to coast. Collectively, that represents 100,000 megawatts of potential generating capacity, or equal to 63 percent of the total existing wind and solar generating capacity in the United States.

“I started LevelTen to build a marketplace to put buyers and sellers together more effectively,” founder Bryce Smith said. “There really hadn’t been a technology solution to bringing software and all the efficiency that entails into the renewable energy space. The idea was to put technology to use in the market so that buyers could purchase slices of new projects. It can be less risky for a corporation to buy a slice of many projects, creating a portfolio, rather than put all of its money into a single project. But before this marketplace, buyers didn’t have the data and analytics to find the optimal mix of projects that offer the highest value and lowest risk. Our objective was to create a market space with really rigorous analytics to make it easier to buy renewables.”

‘Our objective was to create a market space with really rigorous analytics to make it easier to buy renewables.’

The myriad details, though, also are collected in a massive data repository that LevelTen’s algorithms churn into relevant and actionable analysis of market conditions — local, regional and national. The 8 million data points LevelTen collects and updates twice a day provide any number of assessments, two of which are unique and especially valuable to the industry.

The first is an accurate projection of the value of a proposed project over its life. Buyers and sellers know what a project will likely earn before it’s built. Data helps buyers manage financial risks.

The second is a quarterly report introduced last year that has quickly become the benchmark for documenting the cost of power purchase agreements across the country by region. It takes the guesswork out of pricing and gives buyers and developers sound parameters for negotiating wholesale electricity contracts.

LevelTen’s inventions are bringing to an end the cumbersome and expensive project-by-project, person-to-person deal-making that has characterized renewable development over the last two decades. The LevelTen tools also help buyers and sellers manage risk by providing market intelligence and actionable data for making decisions.

The data is comprehensive. It’s like giving new home buyers a deep dive on every home for sale in a city, including details about room sizes, lifespans and operating costs of differing brands of home furnaces, or the equalized value of installing glazed windows versus clear ones. The database aggregates those details, matches them against the buyer’s preferences, and produces a list of homes that best fit.

Smith’s goal is to build LevelTen’s Marketplace into the major national exchange for renewable energy projects. If he’s right, LevelTen is where most buyers and sellers go to negotiate shares in projects, energy prices, and power purchase agreements.

Such efficient market capabilities are essential if the United States has any hope of building the thousands of wind and solar plants needed over the next three decades to slow climate change. The Energy Information Administration, in a projection that many authorities say is much too conservative, said this month that 200,000 megawatts of new wind and solar generating capacity are expected to come online between 2020 and 2050. Independent experts forecast at least twice that amount of renewable generating capacity is needed. 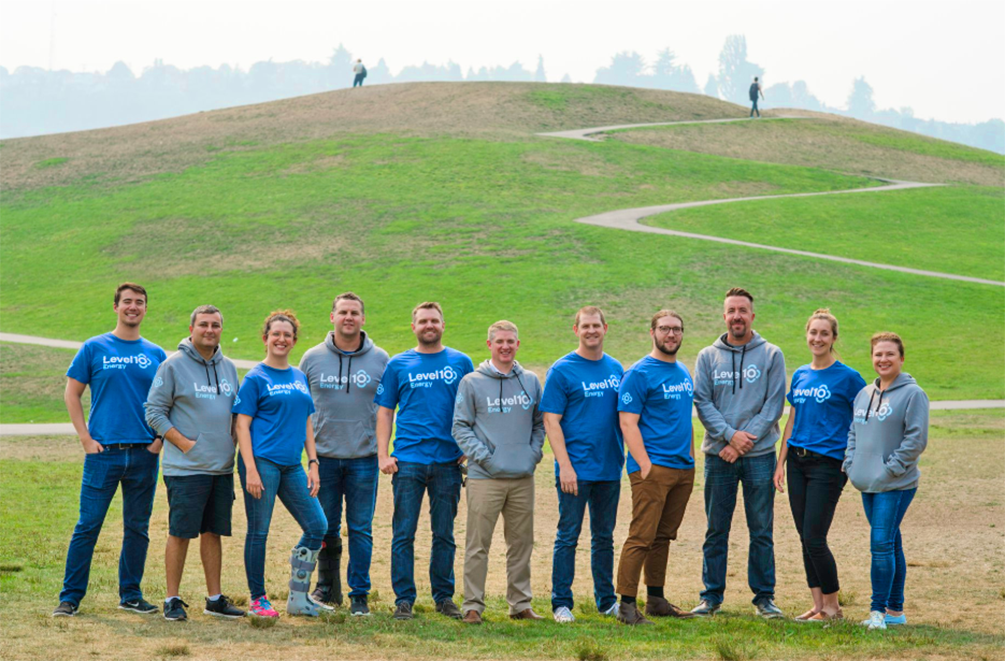 LevelTen is now staffed by 20 people working from a Seattle waterfront office. Its founder is Bryce Smith, a Michigan-born small business entrepreneur whose career included stints in selling wholesale beer and wine in Virginia, and in building solar plants in the Pacific Northwest. Smith knew his idea for an interactive digital renewable marketplace had legs when LevelTen was one of nine Seattle companies invited in 2017 to an intensive and prestigious business boot camp for high-tech entrepreneurs. The learning and training experience launched LevelTen, which hasn’t looked back. The company’s market and analytic tools helped buyers and developers close on 12 projects in 2018, valued at more than $1 billion and capable of generating 1.7 million megawatt-hours of electricity. 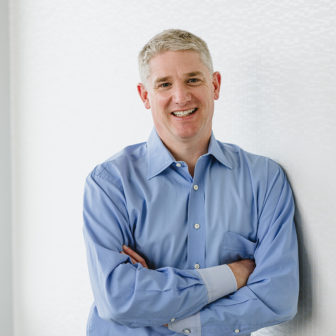 Smith, who is now 46 years old, came to his life’s calling through a natural inclination for business, an interest in climate change and ecological security, and a serendipitous career vector change from the East to the West. Knowing he needed more expertise in finance, market economics and strategy, Smith enrolled and earned a graduate degree at the University of Washington School of Business.

His moment of renewable market epiphany occurred when as a business student Smith joined the staff of the Bonneville Environmental Foundation, itself a startup at the time. The Portland-based nonprofit operated with a novel strategy of inventing market-focused tools for utilities and major companies to use in “creating a future with a stable climate, healthy watershed ecosystems, abundant clean fresh water, and growing reliance on renewable energy.”

The influence of the credits convinced Smith that developing ways to help buyers and sellers gain easier access to capital was vital to building a robust renewable energy sector in the United States. That conclusion gained even more definition in 2009 when Smith co-founded and managed OneEnergy Renewables, a successful Seattle-based solar developer. Putting deals together took months, sometimes years, and was the hardest part of the job.

Typically, Smith said, a project developer waited for a single corporation or utility to purchase most of their project’s generation. Then the developer sold remaining megawatt-hours to a smaller company. The process was expensive and frustrating.

“Corporates had carbon goals,” Smith said. “Stakeholders were pressing them to buy renewables. But it was hard for corporates to find the right project. How do you pick among the thousands available at any one time? How do you pick what was right for you? Really, only the Amazons and Walmarts had the sophistication. And they were committed to buying all the power from a really large wind farm or solar plant.”

So-called “secondary purchase opportunities,” those sought by small buyers, were limited, he said.

LevelTen is Smith’s solution. The company’s platform arrives at a perfect moment for renewable energy in the U.S., as public awareness — and restiveness — about the consequences of climate change is increasing in direct correlation to rising atmospheric concentrations of greenhouse gases. Replacing fossil-fueled electric power with renewable sources of energy is a response reflected in the unfolding era of “100 percent commitment” to green energy in the United States.

In December, the Sierra Club counted 100 American cities and towns that pledge to acquire 100 percent of their electricity from renewable sources by mid-century. World Resources Institute and World Wildlife Fund manage Corporate Renewable Energy Buyers’ Principles, a project that counts 78 major companies that pledge to purchase 69 million megawatt-hours of renewable power for their operations.

Activating what amounts to a formidable change in the structure and delivery of electricity in the U.S. — the world’s second-largest power producer — requires streamlining marketing and sales contracts for thousands of renewable projects. From the start of his career in the Pacific Northwest, Smith anticipated that a breakthrough renewable market invention would be useful in helping to safeguard the planet. “I figured at some point that climate change was going to be a big deal,” he said.

Correction: A typical 100-megawatt solar plant generates around 250,000 megawatt-hours annually. An earlier version of this story misstated the figure.