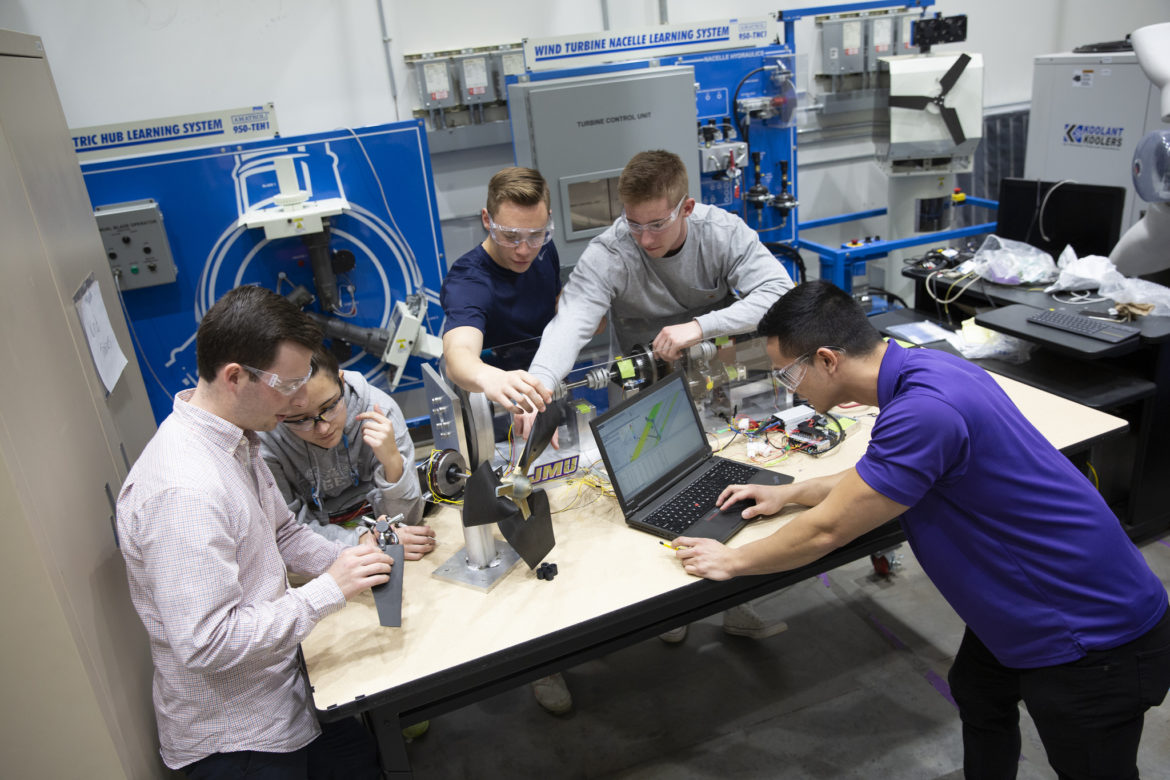 The James Madison University wind team is among 12 groups that will participate in the 2020 Collegiate Wind Competition.

The state is preparing to send two teams to a national collegiate wind turbine competition next year.

If Virginia pursues its potential to be the wind energy capital of the Southeast, developing homegrown talent will be crucial.

So it’s a boon for the nascent industry that teams from two of the state’s prominent universities have been invited to participate in the U.S. Department of Energy’s Collegiate Wind Competition in June 2020.

James Madison University and Virginia Polytechnic Institute and State University are among 12 colleges that will vie for top turbine billing in Denver next year.

Jon Miles, longtime director of the Center for Wind Energy at James Madison, is elated to be sending students to the prestigious event for the third time since it debuted in 2014.

“It certainly is an honor to be recognized by the federal Department of Energy,” Miles said. “It helps prospective students and faculty recognize that our university is taking wind energy in Virginia seriously.”

The wind competition is modeled after the Solar Decathlon, an ambitious Department of Energy undertaking launched in 2002 to encourage ingenuity in the field of renewables among college students.

Students are scored on five elements, which include designing and fabricating a wind turbine and developing a wind farm siting plan. The location of the every-other-year competition rotates in tandem with the American Wind Energy Association’s annual conference.

Matt Kuester, an assistant research professor, is the adviser for an up-and-coming Virginia Tech wind team that was first selected to compete last year when the event was in Chicago. His expertise is in wind turbine aerodynamics and aeroacoustics.

When he came to the Blacksburg, Virginia, university five years ago with a doctorate degree from Texas A&M University, he saw huge potential with a campus wind tunnel that Virginia Tech had purchased from NASA in the 1950s. It had been modified over the decades and several years ago became a go-to blade-testing site for wind turbine manufacturers in the United States and Europe.

“I knew there was a gap at Virginia Tech with wind energy education,” Kuester said about the classes he designed. “My No. 1 goal is to provide an environment to help students succeed in this field. We’re slowly building toward that and this competition is key to that success.”

Indeed, his young team surprised itself in 2018 by finishing fourth to the overall winner, California State University Maritime Academy. Virginia Tech took first place in the technical design portion of the contest and second in the segment involving an on-the-ground, timed siting evaluation.

James Madison, which finished in the middle of the 12-team pack last year, earned first place for its business plan and second place for its siting analysis for a hypothetical wind farm close to campus.

Miles, who arrived at the Harrisonburg, Virginia, campus 23 years ago, advised his first wind energy student during the 1998-99 academic year. Since then, his graduates have started up their own companies and filled renewable energy jobs in Virginia and beyond.

“It’s fun to see a network develop,” Miles said. “We were doing that long before this competition came along.”

Miles and Kuester emphasize the effort they put into busting the myth that the team is limited to engineering students. Equally important are participants with expertise in business, finance, geographic sciences, law, public policy, art and industrial design. For instance, competition judges put a high value on a team’s ability to collaborate with local governments and citizens on site plans.

Both take a holistic approach so students see the big picture with renewables.

“Having students with different backgrounds and skill sets gives the engineers an appreciation for the fact that their work is being done in a larger context,” Kuester said.

“This is not just about designing turbine blades,” he continued. “It’s a very valuable lesson that I’m glad they learn at this level before going out into the real world.”

At James Madison, the competition is treated as a capstone academic project for the 30 or so undergraduates on the team. To keep students invested in the project, participants earn six academic credits.

This spring, Miles and several other professors will help the students design a blueprint for the 2020 competition. Each student will have project-related homework to complete over the summer.

To build his team at Virginia Tech, Kuester has created a wind energy club that has proved popular. He caps membership at 40 to keep the team manageable.

Not all wind team recruits can travel to the competition because even with some funding from the Department of Energy, the whole project is roughly a $50,000 investment for each school.

“The logistics are challenging because there are so many moving parts,” Miles said. “It’s like running a corporation, and then they have to be ready to hop on a plane and present for a few days.”

“Unless you show up in a tank top or bathing suit, you’re going to get an interview,” Miles said with a laugh.

Kuester noted that a central part of Virginia Tech’s mission as a land grant institution is to ensure graduates are serving local communities. He predicts both onshore and offshore wind jobs will boom in Virginia and surrounding states.

“Giving these teams exposure to renewable energy is really important,” he said. “Investing in these bright students is going to pay dividends down the road.”