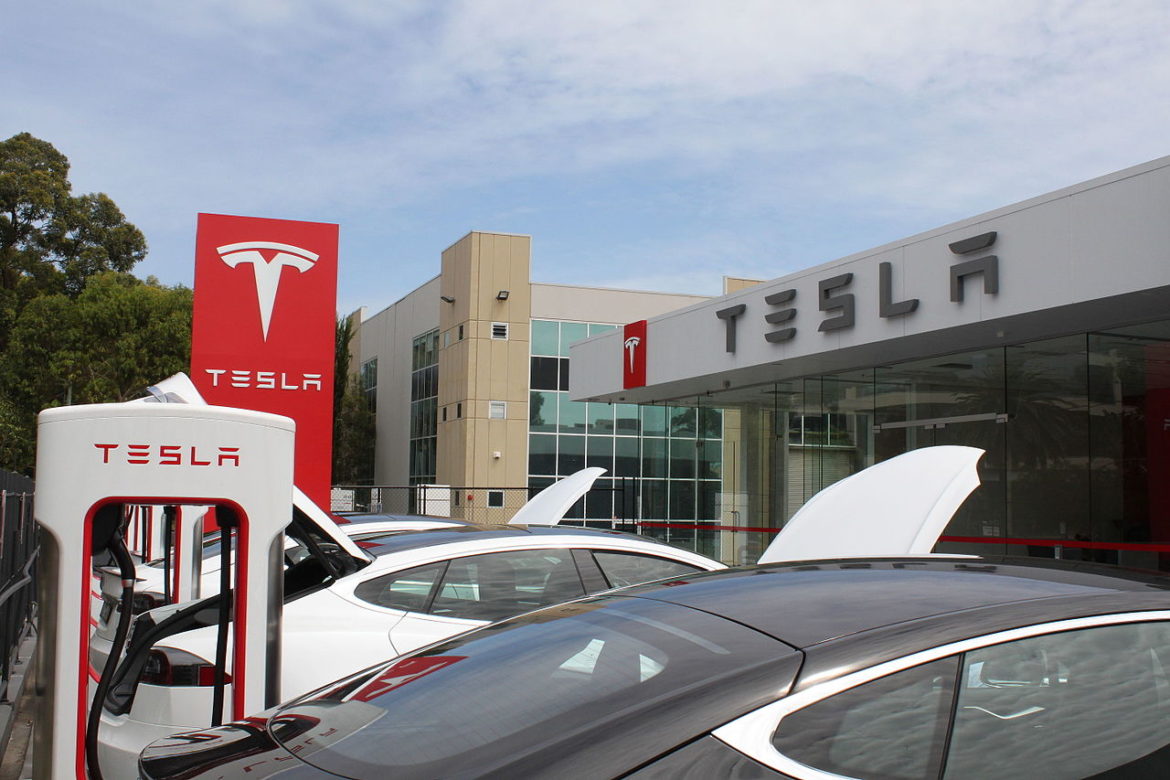 Vehicles charge at a Tesla dealership. The automaker recently announced that it would shift all sales to online only, which could make it easier for Connecticut residents to purchase electric cars.

Environmental advocates are pushing to make buying and owning electric vehicles in the state easier.

Like many Connecticut residents, Martha Klein had to cross state lines when she decided to buy an electric vehicle. Her “tale of woe,” which she jokingly calls it, involved driving an hour each way from her home in Norfolk to a dealership in Poughkeepsie, New York, where she ultimately purchased her Chevrolet Bolt.

Klein first learned about the Bolt on the pages of the New York Times in 2016. She assumed it would eventually make its way to dealerships in Connecticut. A year passed, and Klein grew tired of waiting. Local dealerships had yet to introduce the model, so she would look elsewhere — out of state.

Meeting that goal is unlikely unless electric vehicles become more accessible to consumers. Right now, about 6,000 residents currently have either a plug-in hybrid or fully electric vehicle.

“We’re going to need to do a lot more to reach our goals,” said Samantha Dynowski, state director of Connecticut’s chapter of the Sierra Club.

That includes availability at dealerships, which is the biggest barrier to widespread adoption, according to Dynowski. For Klein, shopping for her  Chevrolet Bolt was not only a headache; she also lost out on the savings usually offered to Connecticut residents who go electric.

“I lost out on hundreds of dollars of rebate because I had to go to New York State to buy my car,” she said.

The state’s incentive program, the Connecticut Hydrogen and Electric Automobile Purchase Rebate, or CHEAPR, offers incentives of up to $5,000 for people who purchase or lease electric vehicles — but only if they purchase from a franchised dealership in the state.

The incentive program is the only major difference between buying an electric vehicle and a conventional car. The rebates are intended to encourage residents to switch to electric, but many, including Klein, miss out because of the low supply of available electric vehicles in the state.

The problem isn’t unique to Connecticut, according to Joel Levin, executive director of Plug In America, a national nonprofit focused on electric vehicles. Across the United States, the deployment of electric vehicles has been limited in terms of quantity and geography.

That’s largely due to a California state regulation called the Zero Emission Vehicle, or ZEV, program, which requires manufacturers to sell a certain number of electric vehicles in the Golden State. While the California Air Resources Board manages it, nine other states, including Connecticut, have since adopted the mandate.

The program was intended to push automakers to research, manufacture and sell more electric vehicles. To an extent, it has been successful — but that success has been largely concentrated in California, thanks in part to how the regulation actually works, Levin said. The program relies on a credit system. Automakers are assigned credits based on the type and number of zero-emission cars they sell. For example, a battery electric car would earn the company more credits than a plug-in hybrid. And each state has a credit quota automakers must meet to continue selling in the state.

“You don’t necessarily have to produce cars [in each state], but have to generate a certain number credits,” Levin said.

Up until 2018, the program had a “travel provision” which allowed automakers to earn credits in other ZEV states for sales made in California. The provision helped automakers build up hefty credit banks in other states; they could then use those credits to meet the state’s ZEV requirements without actually selling electric vehicles in that state. Automakers could also buy credits from other companies with a surplus of credits, like Tesla.

This complicated provisional loophole incentivized a concentration of sales in California, where the market and culture is more accommodating to the sale of electric vehicles.

“Dealers know how to sell them and people want to buy them,” Levin said. Elsewhere, including in Connecticut, there’s a learning curve for dealerships trying to sell electric vehicles and for consumers understanding how they work.

Now that the travel provision has been removed from the ZEV program, it’s expected that the availability and sales numbers outside of California will increase.

Another complicating factor is that Tesla’s reach was limited by Connecticut state law up until very recently. Connecticut law prohibits manufacturers from selling cars directly to consumers; they have to be sold through a franchised dealership in Connecticut. Tesla’s business model was to sell directly to buyers, but it recently announced that it would shift all sales worldwide to online only.

The decision renders the franchise-friendly Connecticut law moot for Tesla. Previously, residents looking to purchase a Tesla Model 3‎, for example, would have to purchase in a neighboring state like New York or Massachusetts. Now they can order a Tesla with a few clicks.

Dynowski says a lot of misperceptions continue to surround electric vehicles, including cost. For a while, the price point limited who could buy electric, but more affordable options are now on the table, including Klein’s beloved Bolt, which costs about $35,000, and Tesla’s new Model 3. When factoring in rebates, some electric cars from Nissan and Hyundai hover around $20,000.

Several Connecticut environmental organizations, like the Sierra Club and the EV Club of Connecticut, organize show-and-tell events around the state, including National Drive Electric Week, where participants share their experiences owning or leasing an electric vehicle.

Advocates say greater access to electric vehicles is critical to Connecticut’s clean energy ambitions. The transportation sector is the largest source of greenhouse gas emissions in the state, accounting for nearly 40 percent of total emissions, according to the Connecticut Department of Energy and Environmental Protection. This year, there’s a groundswell of legislative activity at the state Capitol, including a bill legalizing the direct sale of electric vehicles (though Tesla no longer requires it to operate). Environmental advocates are also pushing for legislation to update building codes to include charging stations, amend state fleet vehicle requirements, and expand the incentive program for purchasing of electric vehicles.