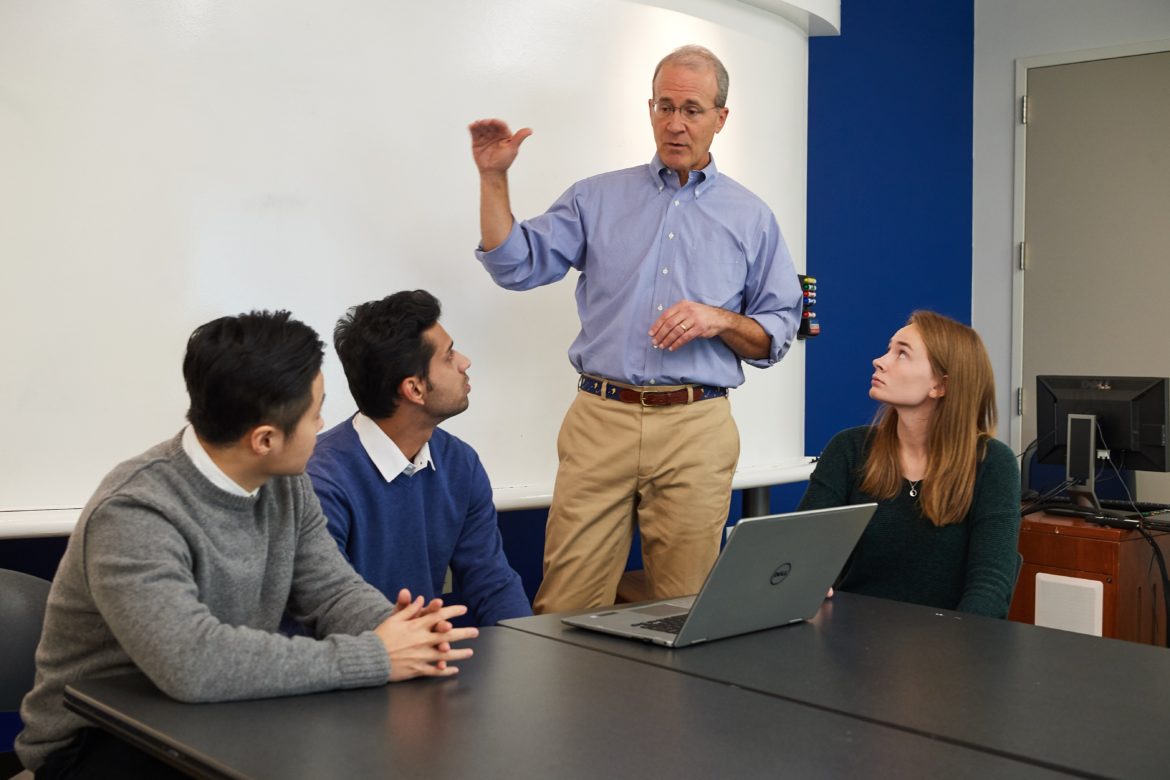 Renewables can provide a hedge against more traditional investments such as oil, one student said.

As colleges and universities divest from fossil fuels, investments in clean energy have not been as quick to catch on, in part because of unpredictable changes in government policy.

But student-managed funds, including at universities in Connecticut and Rhode Island, are starting to invest more aggressively in renewable energy companies to hedge their portfolios and to gain from market returns.

“It has been my interaction with the students over the last nine months that convinced me that ESG [environmental, social and governance] policies could also be a source of competitive advantage, leading to better commercial outcomes,” said Blake Mather, a former executive at Goldman Sachs and an adjunct faculty member and advisor to a newly launched student-managed fund at the University of Connecticut’s Stamford Campus.

The $500,000 portfolio was set up this past fall semester so students can benefit from real-world investing experience. It’s currently valued at $521,243 with a return of 4.25 percent, versus the 2.8 percent return on the S&P 500 for the same period. Earlier in February, student managers picked up a stake in Florida-headquartered NextEra Energy Inc., one of the largest producers of wind and solar energy, with $40 billion worth of investments planned in American infrastructure through 2020.

The students, Mather said, might have a bias for renewable energy investments for philosophical reasons, but any investment must serve the needs of the client, which in this case, is the university.

“[NextEra] is a great example of a green investment that has very strong fundamentals and, just as importantly, is priced at a level to offer a margin of safety that the team found compelling,” Mather said.

NextEra is the only renewable energy company in the basket — the student-managed fund is closely aligned to the industry weights that make up its benchmark, the S&P 500. Still, students screen every potential investment for environmental, social and governance policies, Mather said, which the team believes is an indicator of the quality of management.

‘The objective is to perform’

Student fund managers, on the other hand, make decisions that are based entirely on investment returns. This makes energy policy a critical factor. The uncertainties surrounding federal subsidies for electric vehicles and an extension of the federal solar tax credit are making students and their advisors jittery about investing in renewables.

“Solar power makes sense as long as it’s subsidized,” said Michael Ice, professor of finance at the University of Rhode Island and an advisor to the student-managed Ram Fund. Launched in 2001 with $100,000, the Ram Fund has grown to over $425,000 entirely through investment returns. “No leverage, no derivatives, no shorts,” said Ice, a 30-year Wall Street veteran who was a managing director at Merrill Lynch.

The fund tracks the Vanguard Extended Market Index Fund and does not have a directive for sustainability.

“This is a class where the objective is to perform,” Ice said. “We are trying to beat the index.” The portfolio includes SolarEdge Technologies Inc., a photovoltaics company, and Lumentum Holdings, maker of lasers that enable facial recognition by smartphones. “We liked that it’s the same technology used for self-driving cars that pings the lasers out,” Ice said.

Diversification is one of the reasons Ice’s students are evaluating more renewables these days. That can also provide a hedge against more traditional investments such as oil, said Austin Vurech, a student manager at the Energy, Utility and Industrial Group and a senior in University of Rhode Island’s finance program — 8% of the portfolio’s allocation is in energy.

“We’ve invested to the maximum allocation that our compliance allows, which is 5 percent of our portfolio, in TPI Composites [a manufacturer of blades for wind turbines],” Vutech said. “We looked at it from a fundamental perspective and strictly from a valuation standpoint — so far it has been an excellent security for us and has been up about 12% since we purchased it last year.”

Not all colleges choose to invest all money in individual stocks. The Yale School of Management launched a $500,000 investment fund this past spring and has put its money put into the iShares Core S&P Total US Stock Market ETF. Right now the portfolio’s value is about $526,000, said Matthew Spiegel, director of graduate studies at Yale. Currently, the fund’s only investment in renewables is through the ETF.

Spiegel’s investment strategy? “I never recommend individual investors buy individual stocks,” he said. “If somebody wants to tilt their portfolio towards renewable energy, then either a low-cost mutual fund or an ETF would let them do so at less risk.”

“Everyone is seeing the urgency of the climate crisis,” said Georges Dyer, co-founder of the Crane Institute of Sustainability. This, coupled with the growth and maturity in the sustainable investing space — more managers with longer track records, more sophisticated strategies, more performance data, Dyer said — is a strong catalyst.

Sujata is an award-winning independent business journalist based in Connecticut.