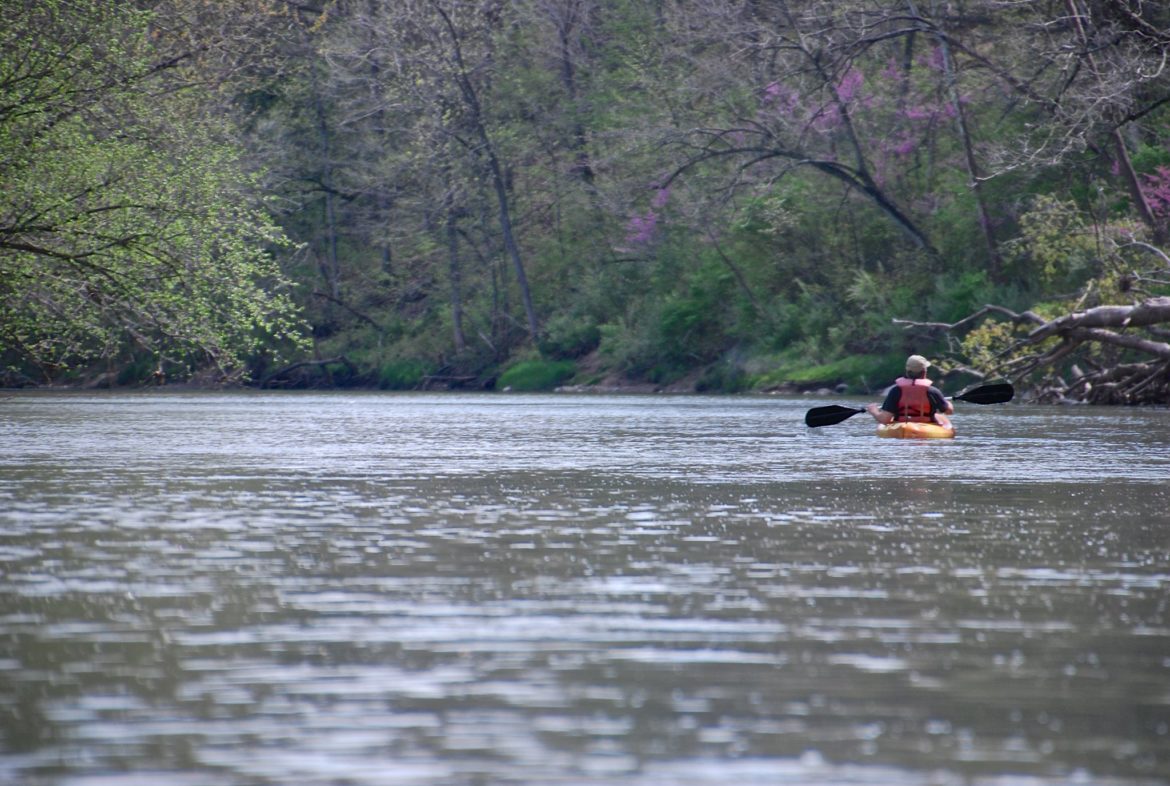 A kayaker paddles down the Middle Fork of the Vermilion River. Two ash ponds are within the 100-year flood zone of the Illinois river, according to Prairie Rivers Network

Multiple coal ash sites in Illinois sit within or adjacent to flood plains, according to environmental watchdogs.

Just as towns were built along rivers in decades past, so were coal-fired power plants that relied on the water for cooling and transporting coal. Now, those plants — some defunct and some still operating — are also repositories for toxic coal ash that could pose a risk of contamination when floodwaters rise.

This may be of particular concern this spring, with the National Oceanic and Atmospheric Administration predicting a heavy flood year, including along the Mississippi River and its tributaries in Illinois.

Multiple coal ash impoundments along the Mississippi and its tributaries are located in flood plains, as depicted in interactive maps compiled by the Prairie Rivers Network using flood maps from the Federal Emergency Management Agency.

Coal ash impoundments on the banks of the state’s only designated wild and scenic river, the Middle Fork of the Vermilion in central Illinois, are also in a flood plain and at risk from severe erosion from the river. Coal ash storage at the site has long been the subject of legal battles, and environmental groups last month filed a lawsuit demanding Dynegy take action to prevent coal ash contamination of groundwater and the river. The Dynegy plant on the site closed in 2011.

“The vast majority of the ash ponds in the state are essentially at risk,” said Jennifer Cassel, an attorney for Earthjustice, which has conducted comprehensive studies of coal ash repositories nationwide.

Islands in the flood

Extreme floods may overtop berms and flow directly into ash ponds, potentially damaging berms and carrying coal ash out. But as experts describe it, a more common and concerning, if less dramatic, risk is the stress that floods can cause to the sides of berms, and the fact that floodwaters can permeate berms and ash ponds without overtopping them.

Most berms are permeable and most of the ash ponds in Illinois are unlined (as are 91% of repositories nationwide, according to Earthjustice), meaning that water from swollen rivers can infiltrate the berms and the soil that forms the sides and bottoms of ash ponds. As water moves back out to the river, the berms and soil act like a filter. Ash won’t travel into the river, but toxic metals like boron, selenium, chromium, arsenic and lead can leach out into the river or groundwater.

And many berms are themselves constructed with coal ash — which is widely used as a construction material. So when floodwaters rise against the side of berms and infiltrate them, metals can leach back into the river.

“Along with the risk of the flood overtopping the berm and getting into the ash pond, there are other slightly less drastic concerns like stability issues,” Cassel said. “If the river rises and falls really quickly, which can happen at some of these sites, the difference in pressure — the quick drop of the water pressure going down — can actually be a significant risk. Berms might not be strong enough to stand up to the pressure from inside of the impoundment” as water pressure from the outside fluctuates, she said, especially if there is extra pressure inside the impoundment from rainwater that has made it more full than usual.

The Illinois River, which crosses northern Illinois to the Mississippi, has at least three power plant sites with coal ash ponds along its banks within the 100-year flood zone: the Meredosia, Pearl Station and Hennepin plants.

Others have ash impoundments that butt up directly against the flood zone, but are not considered in the zone because of levees and berms. Rehn noted that at plants like Edwards along the Illinois River, where levees and flood zone land surround an ash pond on all sides, the impoundment could appear like “an island in the flood” surrounded by water.

Predicted 100-year flood zones were developed based on historical data indicating that the area would flood once every 100 years. However, with more intense storms driven by climate change, it is increasingly common to see “100-year floods” happen multiple times in shorter time spans.

While Illinois towns aren’t generally considered at risk of catastrophic inundation like the disaster when a TVA coal ash repository burst in Tennessee in 2008, increased leaching of metals from coal ash into rivers and groundwater is a serious concern, environmental watchdogs say.

Drinking water is drawn from Illinois rivers with coal ash impoundments along them. Cassel said Earthjustice has not identified any water intakes directly downstream of coal ash impoundments. But there could be other significant impacts on the environment, public health and recreation if contamination from coal ash gets into rivers, she said.

Along the Middle Fork of the Vermilion, two ash ponds are within the 100-year flood zone, according to Prairie Rivers Network’s maps. Advocates fear the ash impoundments at risk of eventual failure and ongoing leaching because of significant erosion caused by the river. Already, the Prairie Rivers Network and the Illinois Environmental Protection Agency have documented seeps releasing contamination leaching from the impoundment directly into the river.

Dynegy, which owns the site, did not respond to a request for comment.

Environmental advocates argue that flooding and erosion increased by high waters are major reasons that coal ash should be moved from the Vermilion and other sites along Illinois rivers. At the Dynegy plant, parties are battling over permanent ash repository closure plans being evaluated by state regulators.

The Prairie Rivers Network has argued that moving Dynegy’s ash to a dry confined disposal facility away from river is the only adequate solution. Dynegy has proposed various ways to keep the ash in place and bolster the impoundment, including with a 1,900-foot-long rock wall along the Middle Fork’s banks to prevent erosion. The Army Corps of Engineers is currently evaluating that proposal.

Advocates argue that erosion is unavoidable and natural on a meandering river like the Middle Fork, and that erosion including related to seasonal flooding can’t and shouldn’t be curbed in perpetuity.

“The Middle Fork is prone to episodic storm events that quickly raise water levels to flood stage,” said Lan Richart, a leader of the group Eco-Justice Collaborative in central Illinois. “The banks of the river continue to erode near the unlined coal ash pits. We have been pushing for immediate and targeted stream bank stabilization of a scale that protects the river from a coal ash breach, yet provides time for decisions to be made regarding the possible removal of the coal ash.”

The Environmental Integrity Project and Earthjustice have shown that coal ash impoundments have caused groundwater contamination in 22 sites in Illinois, and at more than 90% of coal ash storage sites nationwide.

This effect could be exacerbated by flooding, Cassel and others noted. When rivers flood, water on the surface percolates into the ground, raising the groundwater table in that area. That means groundwater rises from below into unlined coal ash repositories, and contamination can leach out.

Meanwhile during heavy rains that would cause flooding in Illinois, unlined coal ash repositories that are not near rivers could also be at greater risk of contaminating groundwater as more water filters through them from above.

And much groundwater eventually flows into nearby rivers. On the Middle Fork of the Vermilion, groundwater contaminated by coal ash has been documented flowing into the river at at least five different sites, as noted in the lawsuit. The recent lawsuit notes evidence of 476 separate exceedances of groundwater standards related to Dynegy’s coal ash storage between 1992 and 2018.

“The only [option] that’s acceptable is the removal of the ash” from the Dynegy site along the Middle Fork, Rehn said. “Looking from the perspective of the long-term health and viability of the river, removal is the only thing that checks all the boxes.”

Environmental groups would like to see ash removed completely from many sites along rivers in Illinois.