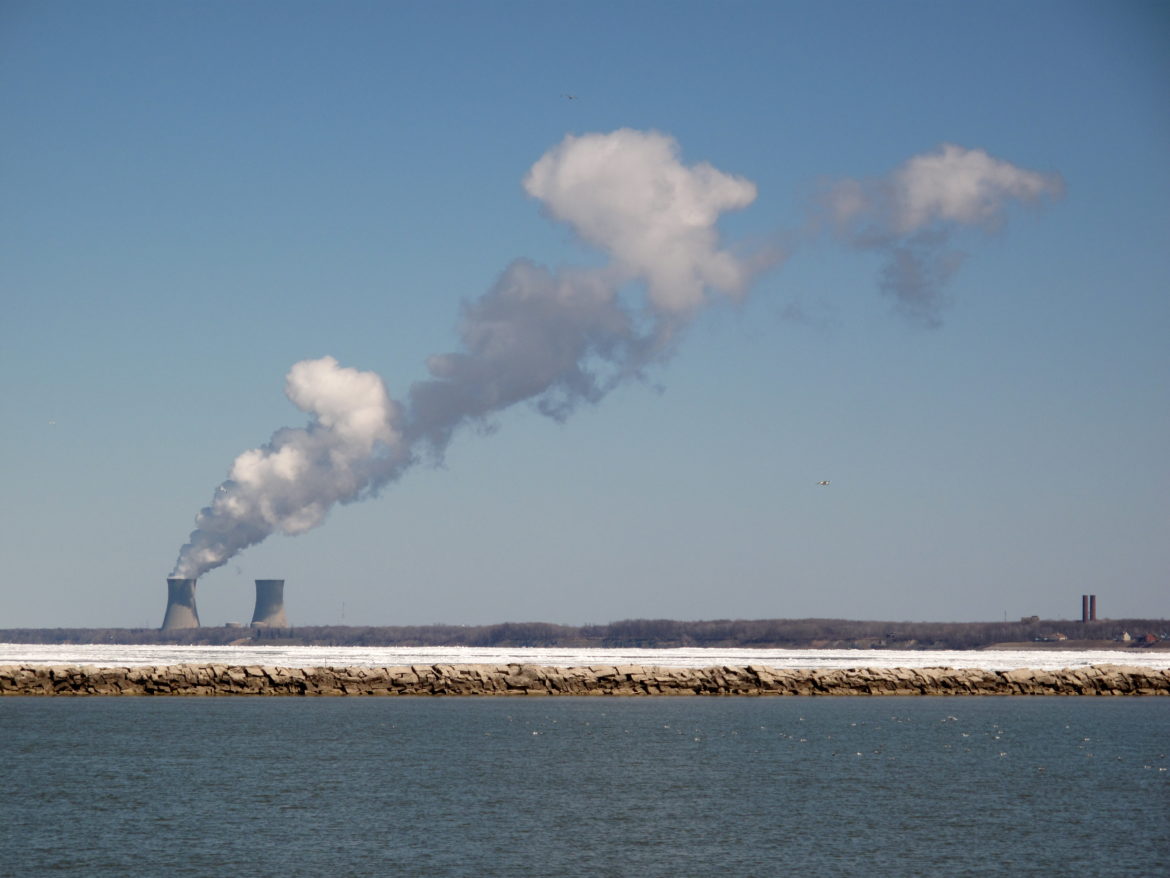 The Perry nuclear plant in Ohio.

An updated version of the bill would still exclude most wind and solar from clean air credits, while allowing payments to unspecified “reduced emissions resources” that could include gas and coal.

The bill also includes language to allow funds collected from ratepayers to “reduce the emissions from other generating technologies that can be readily dispatched to satisfy demand in real time,” without specifying what technologies that could include.

The Ohio Clean Air Program created by the proposed legislation would provide an annual subsidy for any power plant producing zero carbon dioxide emissions at the rate of $9.25 for every megawatt-hour produced. While the word “nuclear” does not actually appear anywhere in the bill, this designation would include nuclear plants and potentially some wind and solar installations.

But solar farms would have to be able to generate at least 50 megawatts (MW) in order to participate, and only wind farms between 5 MW and 50 MW could qualify.

A spokeswoman for the office of House Speaker Larry Householder (R-Glenford) acknowledged that there are currently no solar farms that large in operation in Ohio, but that three have been approved and another six very large solar projects are pending.

Strict setback restrictions passed in 2014 have brought wind development to a standstill in the state.

Natural gas and even coal power plants could attempt to qualify for a subsidy but at reduced levels, based on the amount of carbon dioxide emitted for every megawatt-hour generated, Householder said in a morning news conference.

But details in the language of the legislation, which was not available until hours after Householder’s news conference, are not clear.

The legislation proposes to create two categories of power plants — a “clean energy resource” and a “reduced emissions resource.” The first category would be defined as not producing any carbon dioxide, the latter describing power plants that have made, or will make, “significant contributions” to “minimizing emissions.”

The legislation does not specify what those terms mean, and leaves the details to the Ohio Air Quality Development Board, which must develop and administer the program. The bill would expand the OARDC, whose members are currently appointed by the governor, to include four state legislators.

Language deep in the bill indicates that the program might not be up and running until early 2021, that it would distribute money on a monthly basis while at the same time trying to accumulate an investment fund for future grants for the yet-to-be identified “reduced emissions resources.”

Program funding would come from new charges on customer electric bills throughout Ohio, though the two nuclear reactors are located in northern Ohio on the shore of Lake Erie and sell their power directly into the 13-state high-voltage grid managed by PJM Interconnection.

Householder said he expects the new surcharges to raise about $300 million a year from customer.

The two FES Ohio nuclear plants — Davis-Besse, east of Toledo and Perry, northeast of Cleveland — annually generate about 16 million megawatt hours per year, according to the Brattle Group, a consulting company retained by the pro-nuclear group Nuclear Matters.

And that means FES would immediately qualify for about half of the $300 million raised from customers bills. The funding would go to FES, not the individual power plants, meaning FES could potentially use the money for whatever it wishes, including bolstering operations of its Pennsylvania nuclear power plant, Beaver Valley, near Pittsburgh.

Pennsylvania lawmakers are considering a $500 million bailout bill, to assist Exelon and FirstEnergy.

Householder said he wants the legislation approved before the end of June. Hearings will begin next week.

Householder insisted he has not talked to FirstEnergy Solutions about the legislation. But his target for passage dovetails with a deadline set by FirstEnergy Solutions because it must order new fuel rods for its Davis-Besse reactor by June in order to have the fuel assemblies delivered by the spring of 2020.

The company, which has just been dealt a setback in a federal bankruptcy court ruling rejecting its agreement holding parent FirstEnergy Corp. harmless for future environmental problems, has told the Nuclear Regulatory Commission that it would close all three of its nuclear plants by the fall of 2021. Davis-Besse is the first plant it would close, by May 31, 2020.

Customers would initially see bills decline because the legislation simultaneously knocks out mandatory charges on bills for the last 10 years to pay for programs to advance clean energy and efficiency. Ratepayers would have to contact the state Public Utilities Commission in writing to continue paying the renewable energy surcharge.

Householder and his staff estimated the bills would be reduced from a few dollars a month for residential and commercial customers to thousands of dollars for heavy industry.

‘Nothing more than another bailout tax’

“The bill announced today is nothing more than another bailout tax for failing nuclear plants paid for on the back of hardworking Ohioans,” said Trish Demeter, vice president of Energy Policy at the Ohio Environmental Council.

“The proposed bill would dismantle one of the only state policies that reliably deliver electric bill savings to customers, decrease air pollution and create new jobs in Ohio,” she added in a prepared release.

Daniel Sawmiller, Ohio energy policy coordinator at the Natural Resources Defense Council, said “Ohio urgently needs to update its energy policies to match the national trend towards cleaner, cheaper and more reliable renewable energy and programs that reduce the amount of energy wasted in our homes and businesses.”

“Eliminating the energy efficiency standard will result in higher electric bills as consumers would be forced to pay for energy that is unnecessarily wasted. This increases the output of Ohio’s generation stations, thereby increasing air emissions if we aren’t creating a path for significant renewable energy growth.

“It’s also important to keep in mind, the energy efficiency industry accounts for around 70 percent of Ohio’s clean energy jobs.”

The American Petroleum Institute was also sharply critical, calling the bill “nothing short of a taxpayer-funded bailout of failing nuclear power plants.”

“Ohio lawmakers should be mindful of the long-term consequences of supporting a policy that will subsidize bankrupt corporations and deliberately manipulate the market…,” said Chris Zeigler, executive director of API Ohio.

A spokeswoman for Ohio Consumers’ Counsel Bruce Weston did not immediately criticize the legislation but emphasized that “our preference continues to be for Ohioans to have the benefits of lower prices and higher innovation from competition in power markets.”

Householder defended the proposal as one of “job creation” said the motivation to reduce emissions is “because it gives us cleaner air and we can breathe better.” While carbon dioxide is not considered in itself a danger to humans, it is the main contributor to climate change, which is not mentioned in the bill.

Rep. Jamie Callender, a Republican lawmaker from Concord Township, near the Perry nuclear power plant, and a co-sponsor of the legislation, defended the legislation as one that could help combat climate change.

“If you read any of your papers in the last year you are going to read about CO2 and its impact on the environment,” he said in reply to a question about why Ohio Republicans are moving forward on reducing CO2 emissions despite the lack of a federal mandate.

“Our constituents write us letters every day about that impact. Whether there is a federal mandate or not, doing the right thing to clean the air, we don’t need to take our lead from the feds. We can take the lead as Ohioans.  If we can do that and reduce bills and really encourage new development of zero carbon emissions in Ohio on a statewide basis, I think it is a program that is worth doing, even if the feds are not telling us we have to,” he told reporters.

In a prepared statement, First Energy Solutions praised lawmakers for proposing the legislation.

“We applaud the sponsors of the bill for their efforts in recognizing the important and vital role nuclear energy, along with many other clean energy sources, plays in providing clean, safe, and reliable carbon-free energy to Ohioans,” said Tom Becker, company spokesman.

“As we are just now evaluating the merits of the proposed legislation, we will refrain from further comment at this time. FES remains interested in a legislative solution that maximizes the economic and environmental benefits to the citizens of Ohio and enables the nuclear plants, in which the Company has invested approximately $2 billion in the last decade, to continue operating for years to come, providing much-needed energy diversity to the region.”

Editor’s note: An earlier version of this story misstated the timeline for fuel deliveries to the Davis-Besse plant.