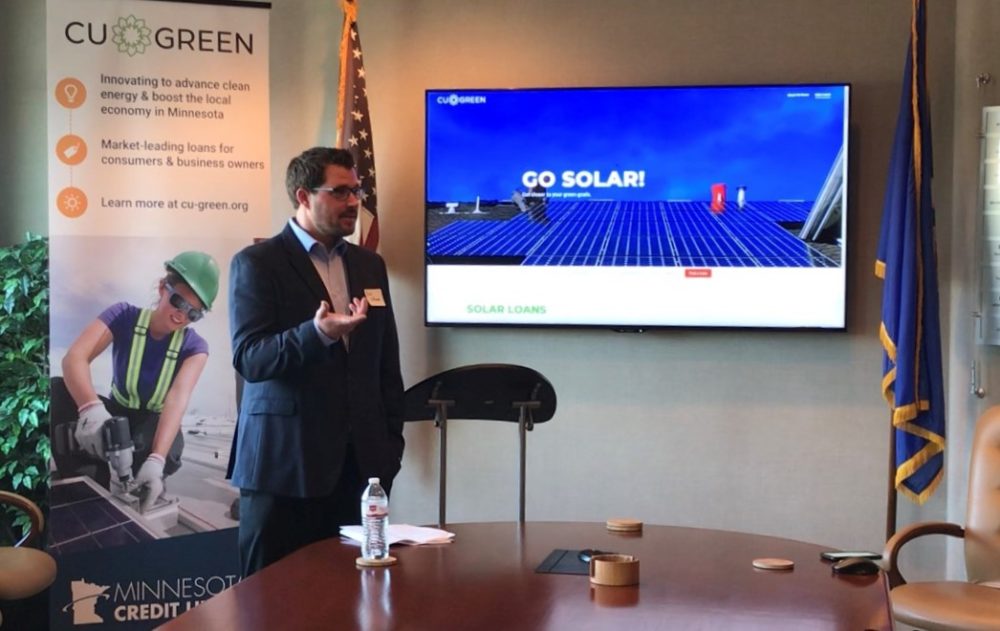 The solar loan program aims to fill a financing gap for residential installations in Minnesota with discounted rates.

“Financing has been a problem for the residential Minnesota solar industry,” said David Shaffer, executive director of the Minnesota Solar Energy Industries Association. “A program like CU Green could fill the financing gap.”

Minnesota Credit Union Network’s government affairs and association services vice president Mara Humphrey said she is not aware of any other credit union initiative in the country that offers solar loans.

The CU Green pilot project began last year and managed to attract a handful of interested homeowners, Humphrey said. She expects the number of homeowners seeking solar loans to grow with the changing weather and with recent outreach by the two credit unions to their members.

“We want to get a sense of what demand exists out there,” Humphrey said. “Now that we’re getting into spring it’s starting to get noticed. But we still want to work out the kinks before we expand it further.”

Hiway senior lending vice president Dean Warzala said his credit union and Affinity Plus agreed to offer the solar loans at a rate 0.25% below typical home equity products. The loans will finance 100% of a solar project, he said, and homeowners can modify loans after receiving tax credits and utility incentives without any additional charges.

“You could get a personal loan to use to buy solar panels in the past, but it was not at this attractive of a rate,” Warzala said. The program is so new that Hiway has yet to issue a loan, though it has begun fielding more calls and at least one member looks ready to start a project.

For credit unions, the solar loan program offers an opportunity to showcase their values to current and prospective members, said Jeremy Kalin, a clean energy consultant and former state legislator who worked on the project.

The loans also carry a low risk of default due to the type of borrower likely to use them, he added. Unlike most home improvement projects, solar creates a revenue stream for borrowers that can be used to pay off the loan, he added.

The solar loan initiative began two and half years ago when state Sen. Dave Senjem suggested to the credit union network that it join the University of Minnesota’s Climate-Smart Municipalities program. Participants in the program have over several years traveled to Germany to study clean energy programs there. Among them on a 2016 visit was Brian Volkmann, executive vice president and chief financial officer for Affinity Plus.

Inspired by Germany’s initiatives, the network asked Affinity Plus and Hiway to work with Kalin on creating a financial product that could spur residential solar adoption.

Kalin and others say one of the barriers to greater adoption has been a lack of understanding of the costs of solar, the tax credits and rebates. The CU Green website explains the options to homeowners, he said, including how to fund the upfront costs of adding solar to their home.

The major advantage for customers using solar loans is that they do not have to convince bankers that an array will be a wise investment, and part of the loan paperwork has been automated on the CU Green website, Kalin said.

The website “takes the mystery out of buying solar panels” by having a great deal of information on solar, including the cost and payback, he said. For example, the website suggests an average rooftop solar array in Minnesota is 6 kilowatts, enough to power an average-sized home for much of the year.

A typical system of this size costs roughly $21,000 before tax credits and saves homeowners at least $41,000 over the 25-year lifespan of the panels.