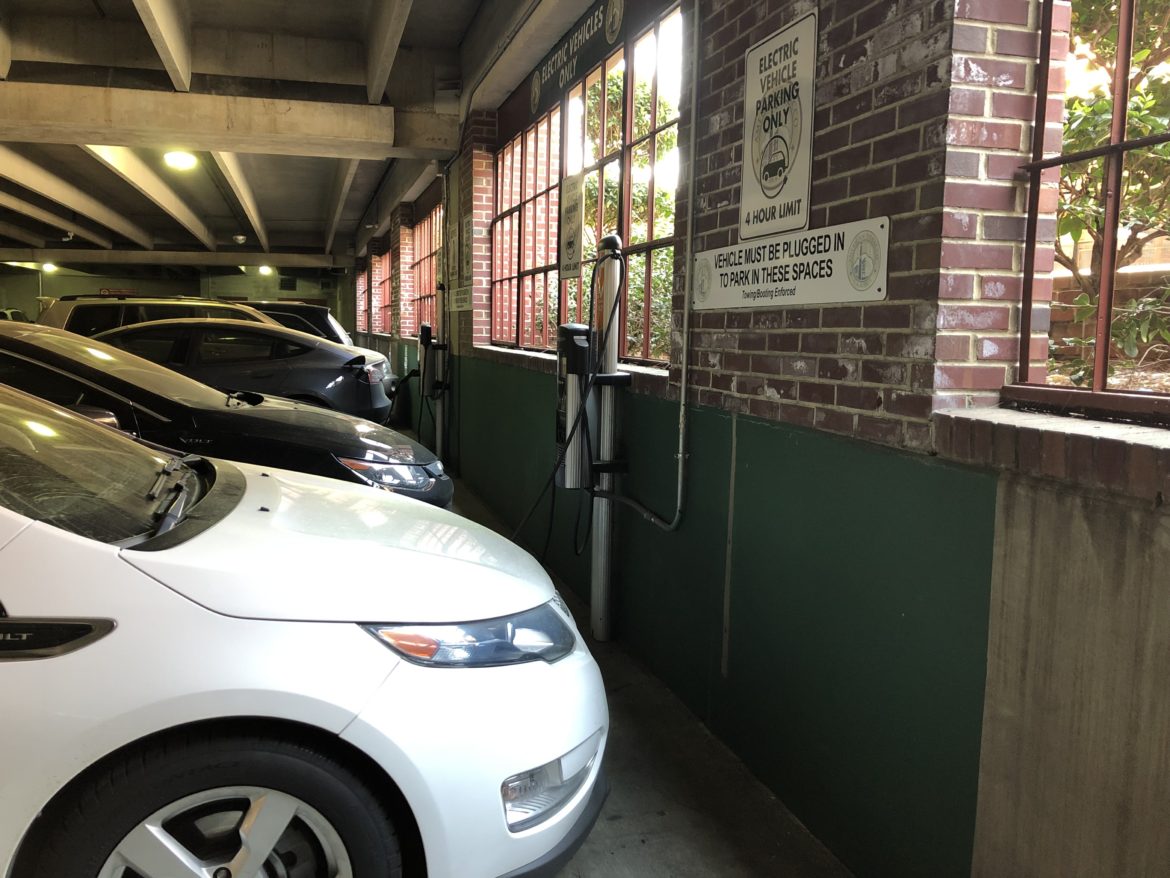 Critics are worried about the number of charging stations Duke Energy would own and operate under its proposal.

But the $76 million proposal has prompted debate among clean energy companies and other observers who differ over the best role for the regulated monopoly in spurring adoption of rechargeable buses and cars.

No one questions the benefits of Duke’s proposal to help buy dozens of zero-emission electric school buses and deploy charging infrastructure for public buses. But critics fear the company’s bid to own and operate 760 new public charging plugs — three quarters as many as operate in the state today — will crowd out competition.

Lang Reynolds, director of electric transportation at Duke, calls that concern unjustified. “Our interest is in supporting the development of a healthy market,” he said, adding, “we’ve proposed limits on the investments that we’re making.”

It will be up to the state’s utilities commission to judge who’s right. If it rules as quickly as Duke wants, the electric vehicle program could get underway in July.

Fossil fuels make up about 40% of Duke’s energy portfolio today, while renewable energy accounts for 6%. Still, most clean energy advocates favor getting electric vehicles plugged into Duke’s grid now: A little solar powering them is better than none, goes the thinking, and as the utility’s generation mix gets cleaner — thanks to market forces, policy change, or a combination — so, too, will electric vehicles.

Like all electric vehicles, electric school and transit buses have lower operational costs than their conventional counterparts, and they emit no tailpipe emissions — good news for school children vulnerable to air pollution and for urban areas choked in diesel exhaust. In February, Greensboro became the first North Carolina city to begin converting its transit buses to electric. It expects to save $350,000 per bus each year on fuel and maintenance.

Managed properly, electrifying transportation can also benefit ratepayers. Batteries on school buses, which sit idle for most of the day, can be dispatched back onto the grid during times of peak demand, avoiding the need for expensive new power plants that only run a few times during the year. Spreading the utility’s fixed costs out among more kilowatt-hours can lower the unit price of electricity, saving customers money.

Despite these advantages, North Carolina’s passenger electric vehicle market is middling compared to other states. In 2017, it ranked 29th nationwide, with about one plug-in for every 1,000 people, including hybrid electric vehicles, which run on rechargeable batteries and gasoline. The state’s all-electric vehicle number that year was just under 4,000. In his October executive order targeting climate change, Gov. Roy Cooper vowed to increase the all-electric figure to at least 80,000 by 2025.

There’s no question the state needs more charging stations to meet Cooper’s goal and beyond. No driver wants to be stranded at work, home or school without a charge, and most observers say the state’s existing network of about 1,000 public charging ports is slightly undersized for its current supply of electric vehicles. A surge in plug-ins will require a corresponding increase in Level 2 chargers (which produce an 80-mile charge in about four hours) as well as fast chargers (which produce the same range in about a half hour.)

“Experts, the advocates, the automakers, the utilities all agree we need more charging,” said Ben Prochazka, the North Carolina-based vice president of the nonprofit Electrification Coalition. And, he stressed, “it’s going to take a village effort.”

Concern lies in ‘the scale and the magnitude’

But observers are conflicted over the role a regulated monopoly like Duke should play in that village, since the company gets a guaranteed rate of return on its investments as approved by regulators.

“We’ve got no issue with Duke being a market participant for EV charging,” said Ledford. “It’s the scale and the magnitude of their proposed deployment that causes concern.”

Provoking the most worry is the single largest portion of Duke’s filing: $38.6 million to give the utility a new avenue to sell electricity directly to individuals. A small fraction would go to Level 2 outlets at apartments, restaurants, and other public locations. Over $34 million would support 120 fast-charging ports, nearly twice the state’s current number (not counting Tesla chargers, which only serve Tesla vehicles.)

In all, the utility proposes more than 700 new public ports, raising red flags for those who say the company doesn’t deserve more market share.

“Duke has been granted extensive privileges by North Carolinians to make big profits with very little risk,” said Chris Carmody, the executive director of the North Carolina Clean Energy Business Alliance. The utility, he said, “should focus on better managing the grid, not on monopolizing even more segments of the private sector.”

Duke could underprice or overwhelm existing and potential competitors with its own stations, critics contend. And they suggest the utility’s proposal runs counter to a measure moving through the state General Assembly that would permit charging stations to price for kilowatt-hours delivered to electric vehicle drivers, not just time spent at an outlet. The change is expected to expand the free market for charging stations and allow more to proliferate.

“The General Assembly’s will — it looks like — is going in one direction,” Carmody said, “and the government-regulated monopoly’s profit motive takes them in a different direction.”

‘It’s really about the program design’

Duke’s Reynolds calls these concerns “completely unfounded.” He says the company’s charging plan was in development well before the legislation was filed, and he points out his company is proposing a fast-charge fee equivalent to the statewide average so as not to disrupt the market. In addition, he says, the U.S. Department of Energy predicts North Carolina will need about 500 fast-charging outlets alone to support 80,000 all-electric vehicles. “We’re proposing 120, so, somebody else has to fill that gap,” Reynolds said. “There’s plenty of room for healthy competition.”

Others highlight the rebates Duke proposes for up to 1,700 residential, commercial and industrial customers who install Level 2 outlets. Such rebates, along with extending electric lines out to the location of charging stations, have been popular elsewhere around the country.

But many observers acknowledge it’s hard to predict exactly how many charging ports will be required for the state to ramp up its electric vehicles, which is why a competitive marketplace is so important. And some worry Duke won’t be as responsive to electric vehicle customers as local governments, retail stores, and other publicly accessible entities now operating the stations.

Reynolds dismisses those fears, noting the utility’s self-interest to operate the chargers successfully. “It’s important for these stations to be used and useful for the full life of the asset,” he said.

No matter what, EVgo, which advertises the nation’s largest network of fast-charging stations, including nearly two-dozen in North Carolina, says any build out of stations needs to be strategic and market-driven, and timed appropriately.

“I want to make sure we build things that get used,” Levy said, pointing to examples outside North Carolina where there are too many Tesla chargers and not enough for other types of electric vehicles. “I don’t think it’s good for the industry if we overbuild in certain places and people get frustrated.”

Levy and others believe Duke’s investment in public charging could be coordinated to fill critical gaps in a charging network now largely dictated by market forces. “It’s really about the program design, and doing it smart and working together with the utility and the regulator to serve the customers,” he said.

‘Finding some middle ground … would be the optimal solution’

For all the debate over Duke’s foray into public charging stations, there’s nearly universal agreement on the next largest item in its filing: $26.7 million to help purchase 85 electric school buses, install and operate their charging stations, and build more than 100 additional plug-in stations for transit agencies around the state.

The school buses will allow Duke to test their ability to deliver electricity to the grid, a benefit called “bidirectional flow.” The utility also hopes to influence how North Carolina uses its $92 million share of the Volkswagen settlement, the automaker’s multi-billion-dollar punishment for selling illegally polluting diesel vehicles across the country. In its first phase of spending, which could begin this fall, North Carolina plans to devote 15% of its award to charging infrastructure and 60% to converting transit and school buses to lower-polluting or zero-emission models.

By paying the difference between the cost of a lower-emission diesel school bus and a zero-emission electric school bus (about $215,000), Duke hopes the state will convert more buses to electric than it would otherwise, part of the reason it has requested the commission review its proposal within 60 days. “We feel like now is the right time to move more strongly on this,” Reynolds said.

Duke-funded school buses, along with infrastructure at both public schools and transit agencies, also displace costs that would otherwise fall to taxpayers. Combined with the ratepayer and public health advantages of electric school buses, that creates “a good intersection of factors,” for a utility like Duke, said Steve Kalland, the executive director of the North Carolina Clean Energy Technology Center.

If Duke gets its wish for a quick approval, the North Carolina Utilities Commission could make its own assessment of those factors by the end of May. But both Carmody and Ledford say their organizations are considering intervening in the company’s request.

“Finding some middle ground that would allow this kind of investment to happen,” he said, “but would allow more market forces to dictate the direction of the deployment, would be the optimal solution.”