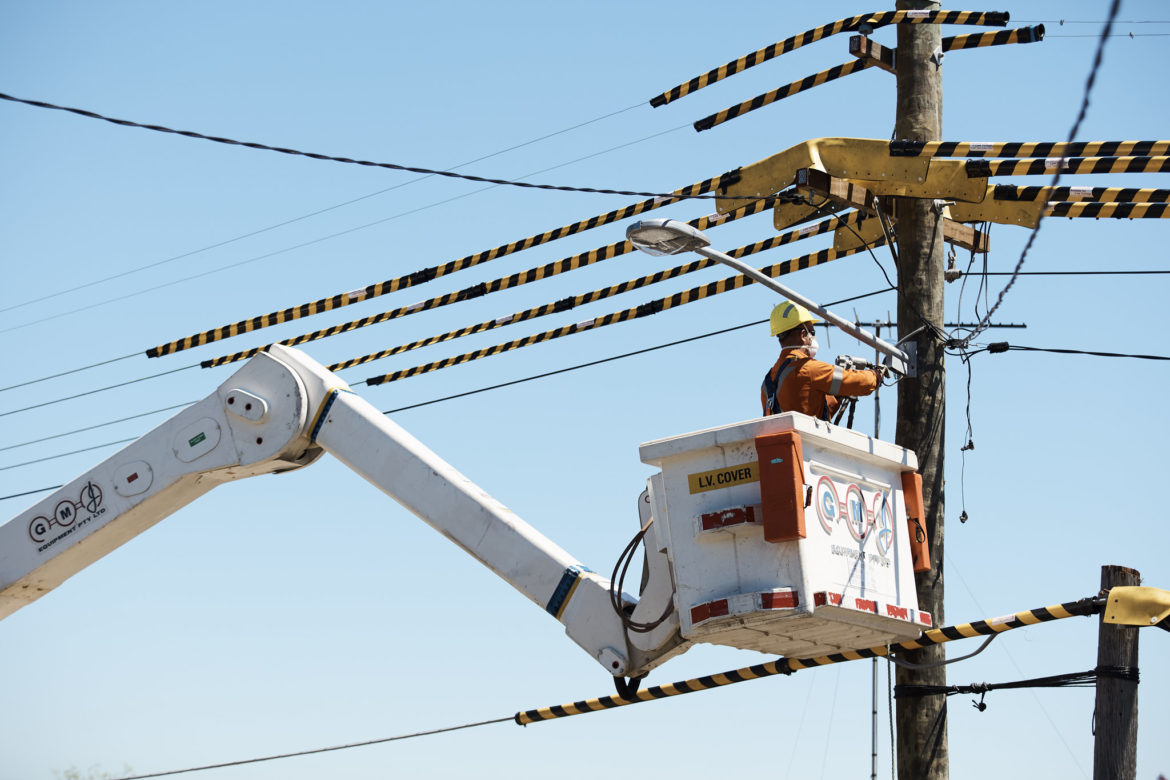 A worker installs an LED streetlight.

Upfront cost of replacement remains a cause for hesitation among many Illinois city officials, despite the energy savings LEDs offer.

Correction: When Illinois’ streetlight incentive program merged with a ComEd program, the utility offered $1.47 per reduced watt as roughly equivalent to the state’s former payments of 30 cents per kilowatt hours saved. An earlier version of this story misstated the units of measurement for the incentives.

An Illinois utility says it will have converted roughly 60% of the streetlights in its territory to energy-saving LEDs by 2021.

But despite the promise of long-term energy savings and improved reliability, many city officials are still not willing to make the leap.

ComEd is preparing to enter the third year of its territory-wide LED streetlight program, which offers cities 70 cents per watt of reduced energy to help overcome resistance to the high upfront costs.

The incentive is high compared to other streetlight programs, but it’s not enough for everyone.

“It’s all about money,” said Scott Brinkman, the streets superintendent of Oak Park, a village on Chicago’s western border. He considered a full retrofit, which, among other things, would have included refurbishing the insides of the fixtures and adding surge protectors. He couldn’t recall what the total cost would have been, but he said that even with ComEd’s incentive, it was too much, and installation could have added more.

“There are absolutely savings over time” with LED streetlights, said Bill Burns, a senior engineer at ComEd who oversees the project. But those savings don’t necessarily make it easier to pay for the lights up front, he added.

The streetlight program is “a new area for us,” Burns said. While the utility has managed energy efficiency programs for the past decade, public sector outreach didn’t become part of its responsibility until 2017.

At that point, under the Future Energy Jobs Act, Illinois’ two public utilities took responsibility of streetlight incentives from the state Department of Commerce and Economic Opportunity, which had run a program for municipality-owned streetlights for several years. ComEd was in the early years of a program to convert streetlights that it owns.

When the two programs merged, the commerce department’s incentive was 30 cents per annual kilowatt hours saved, which translated to $1.47 per watt of reduced load under ComEd’s program. All municipalities had a brief opportunity to apply for an incentive of $1.47 in the second half of 2017 — resulting in a rush of applications — before the utility landed on the current 70 cents beginning in January of last year.

Despite the drop, “municipalities are still enjoying the $0.70 per watt incentive,” according to an email from ComEd. And it’s still relatively high, earning the utility recognition in ACEEE’s January “Exemplary Energy Efficiency Programs” report.

Still, the capital expense can be steep. Rather than a full refurbishment, Brinkman is proposing that Oak Park simply replace its mercury-vapor lightbulbs with LEDs. Four blocks of residential bulbs were replaced with bulbs of varying light color temperatures in a pilot that began last summer. Based on feedback from the pilot, Brinkman hopes to change Oak Park’s residential lights to 3,000-Kelvin LEDs.

Oak Park would still receive a ComEd rebate, but it would be a discount on the bulbs rather than the streetlight incentive. With the rebates, he estimates it will cost less than $600,000 to replace 2,300 bulbs.

The village board still has to approve the project, but if it goes through, Brinkman predicts high energy savings and substantially reduced maintenance needs. “There’s only a limited amount of money in our budget to do something like this,” he said. This way, the village won’t have to spend a lot of money on a full retrofit but can still get the job done.

Officials in other cities feel the savings outweigh the costs of replacing their streetlights.

“Our staff recognized the potential savings in energy consumption and maintenance, as well as the longer life-span and the ‘cleaner’ light and less ‘spill,’” Phil Modaff, director of public works for the village of Carol Stream, wrote in an email, referring to the more direct aim of the LEDs.

Carol Stream, about 30 miles west of Chicago, has been phasing in LED streetlights since 2011, before ComEd took over the program. Modaff estimated the village has reduced energy consumption by 50% for the lights that have been replaced.

Chicago in March installed its 100,000th LED streetlight, on its way to replacing a total of 270,000 by 2021. The city expects to earn $35 million in incentives toward the $150 million contract with the energy efficiency company Ameresco to coordinate the project.

While the money may have helped, it wasn’t the deciding factor, said Mike Claffey, director of public affairs at the Chicago Department of Transportation.

“The bottom line is, there’s a widespread understanding at the level of the mayor on down … that there’s modern technology out there for streetlights, and a number of cities have been converting,” Claffey said.

Chicago’s annual electricity bill is $18 million, he added. The LED lights could reduce that by more than 50%, which in itself is “a great incentive.”

The new lights also have sensors, part of a remote monitoring system that, once operational, will allow the city to track outages. Streetlight outage reports are one of the most common 311 calls, Claffey said, accounting for 900 to 1,000 calls each week, many of which turn out to be false reports. Remote monitoring will hopefully mean fewer wasted trips by city officials responding to those calls. Given all of these factors, “we think it’s well worth the investment that we’re making,” Claffey said.

Cost aside, officials are often hesitant when faced with new technology: “They don’t want to be on the bleeding edge,” Burns said. ComEd partners with Elevate Energy to reach out to city officials about the program.

“We try to personalize it,” said Mary Jo Warskow, the project manager at Elevate Energy who oversees the outreach. Aside from phone calls and emails, the utility and nonprofit coordinate live workshops, which, when possible, feature officials from municipalities that have participated in the program. “Hearing from their peers, and what works and what didn’t work” is useful for public works managers and other administrators, Warskow said.

The current four-year plan takes ComEd through 2021. It accounts for cumulative savings of 355 gigawatt-hours of electricity, which, with a rough estimate of 750,000 streetlights in ComEd’s territory, translates to about 60% of the lights being converted. At that point, ComEd will review its goals to determine next steps. “We expect to be doing this at least four years, and possibly beyond that,” Burns said.

“In general, there’s a pretty broad consensus that moving to LED streetlights is the right thing to do,” he said. But considering the up-front cost and budget, “each municipality has to decide on the merits” what to do.