Photo By
Hank Doster / One Energy 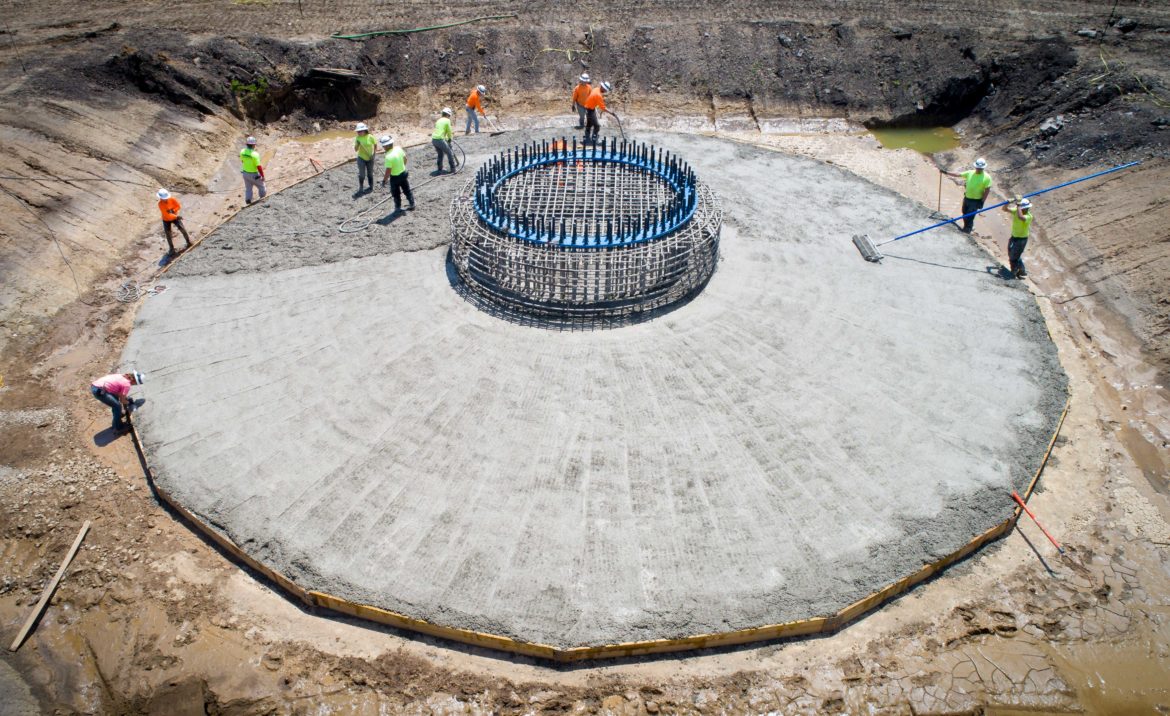 A crew works on the concrete foundation of a wind turbine.

Meanwhile, other work in the Midwest is exploring ways to capture and use some of the carbon dioxide created in the cement-making process.

Workers broke ground this week for a One Energy wind project at LafargeHolcim’s Paulding cement plant in Ohio. The three turbines being built by the Findlay-based energy company will supply about one-fifth of the cement plant’s electricity needs. They should also eliminate more than 9,000 tons of carbon dioxide emissions annually.

LafargeHolcim plant manager Robert Pitt sees the company’s 20-year renewable energy agreement with One Energy as “a nice long-term fixed price hedge” on electricity costs, which should let it save money over retail electricity rates.

“And of course, every opportunity we can to reduce our carbon footprint, we try to take,” Pitt added. LafargeHolcim has a global goal of 40% lower net carbon emissions per metric ton by 2030, compared to 1990.

Those emissions matter because of climate change. The global cement sector is the second largest industrial emitter of carbon dioxide, responsible for about 7% of emissions worldwide, according to a 2018 report from the International Energy Agency, and accounts for a similar proportion of industrial energy use.

“It has to be a good business decision if you really want it to be a true sustainable project that makes sense for the company at all levels,” Kent said. A customer might pay a premium to achieve environmental benefits. But the project must still provide an economic benefit as well.

The Paulding plant project will do that, Kent said. The three turbines’ 12 million annual kilowatt-hours of wind energy will feed directly into LafargeHolcim’s operations and offset its retail consumption from the grid. That’s a “much higher rate than wholesale numbers,” Kent noted.

The Paulding plant site also works well for One Energy’s business model of constructing and operating wind turbines for industrial facilities. The cement plant is expected to continue operating for several decades, so a long-term power purchase agreement makes sense. And there is a lot of acreage at the site.

LafargeHolcim mines limestone on some parts of the site, which spreads over several hundred acres.

The three turbines will sit on part of the site that was formerly a quarry. They should start producing electricity by the end of this quarter, Kent said. Land around the foundation for each turbine will be seeded with grass at the end of construction. LafargeHolcim can determine what other use it might wish to make of that area, he added.

The project will also further solidify the ongoing business relationship between the company and One Energy, which itself is a customer of LafargeHolcim. “We are very proud to use LafargeHolcim cement in our foundations” for turbines within the plant’s market area, Kent said.

Energy efficiency is also an ongoing focus, Pitt noted, both for reducing electricity use and for improving the plant’s thermal efficiency. Other cement plants across the country take a similar approach. Two dozen U.S. cement plants were among the 100 facilities that earned Energy Star certification from the Environmental Protection Agency in 2018. Midwestern plants on the list included Buzzy Unicem USA and Continental Cement Company, both in Missouri.

Additionally, while the furnace at the Paulding cement plant emits greenhouse gases, it actually uses non-fossil fuels made from processing wastes. There’s an offsetting effect, Kent said, because those materials were “going to get burned anyway.”

Even if cleaner energy powered cement plants, about half or more of the industry’s total greenhouse gas emissions come from the chemical process of heating limestone to make “clinker,” which is then mixed with additives to make the final cement product. So other work in the Midwest is exploring ways to capture and use some of that carbon dioxide.

The question is whether any carbon capture and use will actually cut net greenhouse gas emissions and be cost-efficient, said environmental engineer Shelie Miller at the University of Michigan.

One approach is taking the carbon dioxide and “mineralizing it — basically turning it into rock,” Miller said. That’s similar to what happens in nature when carbonate rocks form. “We’d just be industrially trying to speed up that process,” she explained. The resulting material could then be fed back into the process as a raw material to replace some limestone otherwise going into the cement.

From an environmental and energy perspective, that approach looks “fairly favorable,” Miller said. She reported on her work at the 2019 annual meeting of the American Association for the Advancement of Science in Washington, D.C.

In contrast, using captured carbon dioxide to make a higher-value fuel would be “much more chemically intensive,” Miller noted. Also, the process would “require an incredible amount of energy.”

Other research suggests that energy and process emissions could be cut by using coal fly ash or other materials in place of some of the intermediate clinker product. Some coal ash and other materials are already used in some cement formulations to improve strength or other qualities, and the industry supports those efforts, said spokesperson Michael Zande at the Portland Cement Association.

However, the industry is generally loath to risk substantial changes to its recipes without assurance that its products will keep their important mechanical properties, researchers noted in the journal Science last year.

Meanwhile, greenhouse gas emissions from the U.S. cement industry were about 20% more in 2017 than they were in 1990, according to Environmental Protection Agency data released on April 11.

Looking ahead, Ohio and other Midwestern states face growing infrastructure needs in the coming years, according to the American Society of Civil Engineers.

The actual growth in cement demand for that work will depend on funding, Zande noted. But even without a substantial stimulus program, the Portland Cement Association currently expects infrastructure cement demand in Ohio to grow roughly 1.2% per year, he said.

Kent at One Energy sees a growth future for wind energy at industrial plants in the state as well.

“It makes good business sense now. It makes business sense for the long run. And it happens to be a very sustainable, clean thing to do” as well, he said.