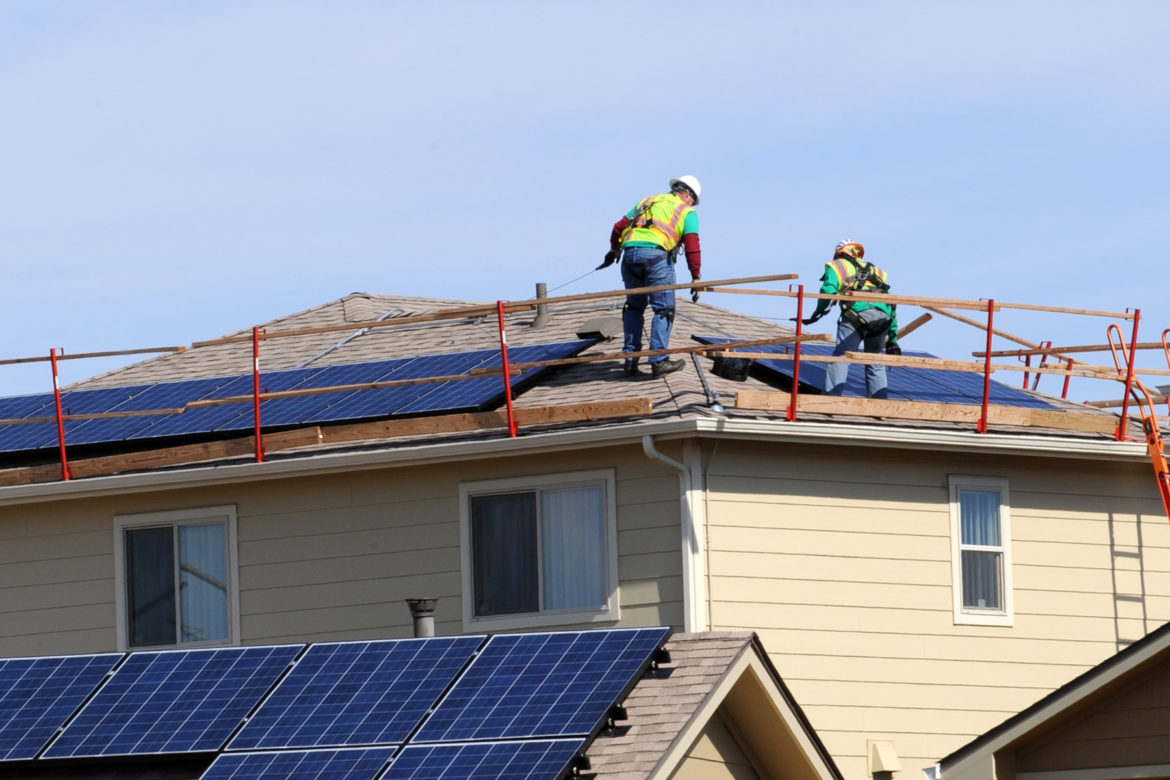 Contractors scale the rooftop of a residence to test its solar panels.

When Tom Feist and his wife, Linda Schadler, moved to northern Vermont last year, they knew they wanted a backup power source to protect them from bitter cold and snow and for added peace of mind in a relatively remote home. They immediately decided on a solar array to provide electricity, but had choices to make for a backup power system.

While a propane generator was cheaper than the initial $12,000 they eventually spent on the battery, the costs penciled out comparably over the lifetime of energy credits from the system in addition to lower maintenance expenses than what a generator would require.

“Long-term it looked like a better deal, for environmental and financial reasons,” Feist said.

Their home has a 10-kilowatt-hour battery with the solar system rated at 7.2 kilowatt peak power. “We can run a well, septic, heater, a refrigerator and some lights to keep comfortable, even if the power was out for an extended period,” Feist said.

The installation is part of a larger effort by a Vermont utility to encourage distributed energy and save money by reducing peak demand.

Feist enrolled in a pilot program launched by Green Mountain Power last year that has signed up more than 500 customers to test acceptance and operations of combined solar and battery storage systems. Results were so promising that a second and enhanced pilot program was announced in February.

‘We now see peaks after dark’

Green Mountain Power has worked to integrate battery storage into its system on a small scale, but in the past year it has deployed an increasing number of units. It began offering solar-storage platforms more than a year ago. It started a “bring your own device” program with batteries provided by third-party suppliers, first as a pilot and now as a consumer option.

In February, Green Mountain Power, along with Renewable Energy Vermont, announced an expanded version of the program that offers more services and includes program improvements suggested by customers.

“We started working with battery storage a few years ago to get an idea how it would work, decreasing load, providing value and system resiliency,” said Josh Castonguay, Green Mountain Power vice president and chief innovation officer.

Customers are able to buy batteries from third-party suppliers and the offerings now available have been expanded, in part based on customer requests.

Green Mountain Power originally provided only monthly bill credits based on the number of kilowatts the systems provided to the utility. “Folks asked if we could turn that bill credit into an up-front value, like an instant rebate, based on the future value stream they were going to get,” Castonguay said.

He said the utility knows the value of every kilowatt of reduced load, which it can then extrapolate over the 10-year expected life of the battery.

The new version of the program still provides a monthly bill credit, but customers can take a one-time credit on the value of the battery. The battery credit is valued at $850 per kilowatt-hour, up to $8,500 for the maximum that the program allows. Customers in grid constrained areas who add batteries to existing solar systems receive an extra $150 per kilowatt-hour. Customers who add their own electric vehicle chargers also receive bill credits of $10 per month.

“That provides value to all of our customers by giving them lower rates and providing more environmental benefits throughout the system” with reduced reliance on power plants, he added.

Castonguay said both pilots are limited to 2 megawatts. Based on system size, each program can accommodate 500 to 700 customers.

The programs are already showing value to the utility as it tries to lower its monthly and annual peaks.

“We hit peak late last August. In one hour, we were able to save our customers about $350,000 with about 3.5 megawatts of Powerwall batteries” by avoiding power purchases in the spot market, Castonguay said. “Every battery we add in incrementally, we’re just increasing the amount of savings.”

Collectively, Green Mountain Power is approaching 200 megawatts of installed solar, with another 50 megawatts in the queue. “It has done such a done a great job of crushing the monthly peaks, we now see peaks after dark,” he added.

Customers control when and how much power is available

Feist and Schadler still rely on grid power for about one-fourth of their needs. The system was installed at the end of October as days became shorter and Feist expects to experience more benefits as days become longer and credits earned from the utility are banked for next winter.

Under the program, battery owners are able to set a pre-determined amount of stored energy for their own use and allow Green Mountain Power to tap into the rest. The utility aligns historical usage data and weather forecasts to determine what power needs throughout its distribution system might be along with projections of how much energy behind-the-meter solar might provide. Feist agreed to let the utility tap into his battery for up to 7 kilowatt-hours over a three-hour period. He gets a $12 per month credit for making the battery available.

Feist said he has received about four or five alerts, which are sent via email and give him the opportunity to opt out. No response from the homeowner tells the utility the power is available.

The warnings anticipate day-ahead needs in three-hour increments. Recent examples over the winter included a mid-February morning from 7 to 10 a.m. and an early March evening from 5 to 8 p.m. Weather records from those events show particularly cold days with low temperatures in the single digits and highs around 20 degrees. But cold temperatures by themselves don’t necessarily mean a power draw as Feist did not get alerts in the interim weeks, which also included cold snaps.

Paul Lesure, general manager and partner at Green Mountain Solar, sold Feist the combined system. He said his company has been selling battery and solar systems in the two years of its existence, including before the utility launched its pilot program in early 2018.

About 10% of his sales are now combined solar-battery installations, covering a wide range of customer choices. Several different batteries are now on the market besides Tesla Powerwalls, giving him the ability customize systems.

“There’s a difference in what customers want. Some want backup for the whole house while others want just enough power to flush a toilet,” he said.