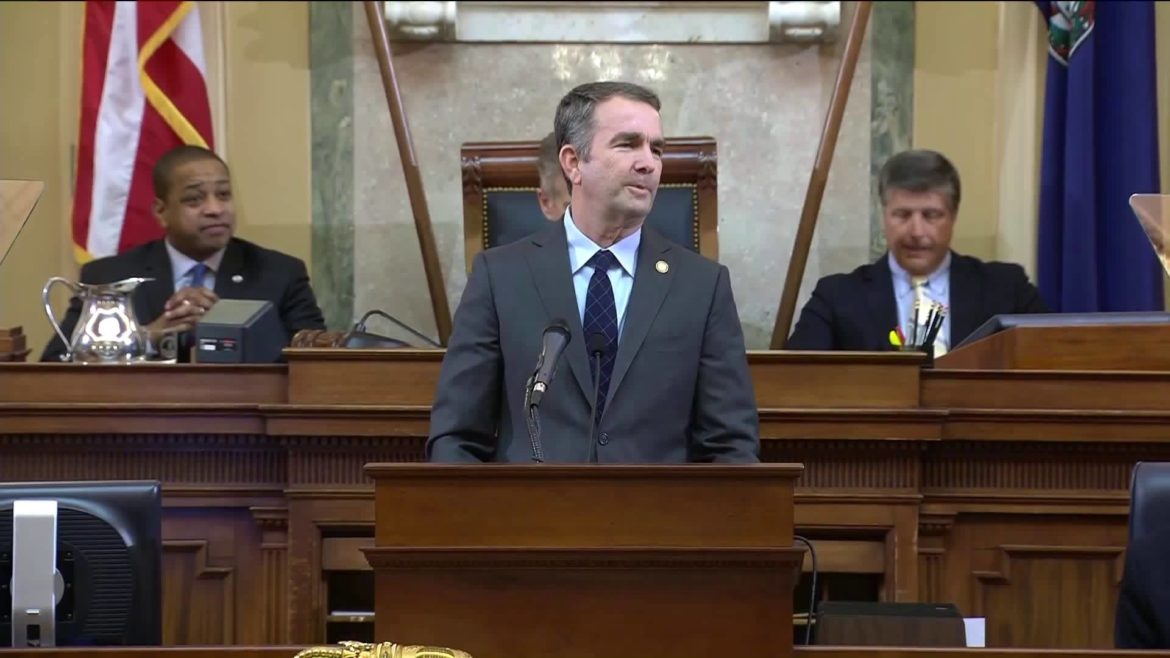 Gov. Ralph Northam delivers his second State of the Commonwealth speech before the Virginia General Assembly in January 2019.

Even after an expected veto, Republicans in Virginia’s General Assembly will have leverage to shape RGGI effort.

Democratic Virginia Gov. Ralph Northam is expected to veto an attempt by Republican legislators to yet again put the kibosh on one of his signature carbon-control measures.

The General Assembly could still dictate if the program sinks or swims, though.

That’s because legislators, via the power of the purse string, will decide where to spend the revenue generated in Virginia by affiliating with what’s called the Regional Greenhouse Gas Initiative, or RGGI.

The priorities of a GOP-controlled Legislature are not likely to be in sync with Democrats or environmentalists. The latter want to see a significant investment in addressing the severe sea level rise affecting the state’s densely populated coastline, which is also a popular tourist attraction.

Conservationists and health advocates have been urging Northam to use his veto pen since April 3, when Republicans inserted language into the budget to halt Virginia’s link with RGGI.

By law, the governor has line-item veto authority.

“This is the most ambitious action any Southern state has taken on climate during the Trump presidency,” Harrison Wallace, Virginia director of the Chesapeake Climate Action Network, said after the board vote. “We call on Gov. Northam to use his constitutional authority to veto these [budget] amendments and protect Virginia’s climate legacy.”

The pair of amendments the Republicans inserted into the budget would essentially block funding for Virginia to enter RGGI. One of the compact’s chief goals is boosting regional investments in renewable energy.

‘A foot on the accelerator of the clean energy transition’

RGGI began in 2009 in the Northeast. A report issued earlier last year by the Analysis Group stated that the nine participants — New York, Delaware, Maryland and the six New England states — cut heat-trapping gases by more than half between 2008 and 2017.

Participating states set an emissions cap by deciding how many carbon pollution allowances to offer for sale annually. The cap is lowered each year. Power plants purchase allowances for each ton of carbon they emit. States use the revenue from auction allowances to pay for an array of carbon reduction programs.

It’s estimated Virginia would “earn” $75 million via RGGI. If power plants exceed the carbon dioxide allowances they are allotted annually, they have to go into the marketplace and buy credits. That gives them the financial incentive to deploy more renewable energy.

Virginia’s Department of Environmental Quality began work on the new carbon-curbing regulation in 2017 at the behest of the previous governor, Democrat Terry McAuliffe. It is scheduled to take effect in 2020, when Virginia would start with an initial “budget” of 28 million tons of greenhouse gases. The goal is to reduce emissions 3% annually over a decade.

That 28-million-ton target thrilled advocates because it is roughly 18 percent below the board’s original baseline proposal.

David Paylor, who directs the Department of Environmental Quality, has emphasized that his agency is continuing to “explore all options to implement this rule in a cost-effective way.”

“This vote puts a foot on the accelerator of the clean energy transition that Virginians want to see,” Walton Shepherd, Virginia policy director for the Natural Resources Defense Council, told reporters during a teleconference on Friday afternoon.

Virginia businesses, which were not on the teleconference, have long pushed the state to participate in RGGI as a method of attracting innovative, forward-thinking companies. They claim the connection will lead to cleaner air, a more resilient electricity grid, reduced exposure to high electricity prices and more clean energy jobs.

Ceres collaborates with investors and companies to drive economy-wide solutions. The nonprofit has helped to coordinate a letter-writing campaign among Virginia businesses such as Mars, Unilever, and JLL, urging the Northam administration to follow through on adopting carbon regulations.

Dennis Sasseville, director of corporate sustainability for Worthen Industries, said expanding climate initiatives matters because his manufacturing company “has long realized the value and cost benefits that clean energy can bring to our business and the economy as a whole.”

The family-owned company, founded in New Hampshire in 1866, specializes in adhesives and coatings. About 35 of its 300 employees work in its Richmond, Virginia, warehouse and manufacturing operation.

‘There is no time for partisan politics and delay tactics’

The report on RGGI by the Analysis Group also concluded that a total of $2.8 billion in auction proceeds had flowed to member states over a nine-year period. Those states have added 44,000 new job-years (the equivalent of a full-time job for one year) and economic benefits exceeding $4 billion since 2009.

New Jersey, which dropped out of RGGI in 2011, forfeited the opportunity to pump as much as $154 million in auction revenues into energy savings over the last three years by exiting, according to Analysis Group researchers. The Garden State is in the midst of rejoining the compact under Democratic Gov. Phil Murphy.

In Virginia, Republicans resorted to the budget amendment tactic earlier this month after Northam vetoed their first attempt to stymie Virginia’s participation in RGGI.

Last month, Northam struck down HB 2611, which would have prohibited Virginia from entering RGGI unless authorized by two-thirds of the General Assembly.

Del. Charles Poindexter, R-Glade Hill, introduced the anti-power plant carbon control bill that passed the House of Delegates 51-48 in January and then squeaked by in the Senate on a 20-19 vote in February.

The fact that the governor resorted to a veto in March is an indication of how difficult it is for climate-related issues to keep and gain traction in a state with a Republican-dominated Legislature long leery of doing such heavy lifts.

Interestingly, the General Assembly could have new leadership by 2020 because all 140 seats are up for election this November. The GOP now has a 51-49 edge in the House and a 21-19 advantage in the Senate.

Environmentalists are burrowing in to flip both chambers. But first, they want Northam to use his veto power — and soon.

“There is no time for partisan politics and delay tactics,” said Nate Benforado, an attorney at the Southern Environmental Law Center. “It is time to act.”

Kendyl Crawford, director of Virginia Interfaith Power & Light, urged the governor to be a good steward.

“Gov. Northam is well aware that the home we share is a precious gift from our creator,” she said. “We must protect it for future generations.”