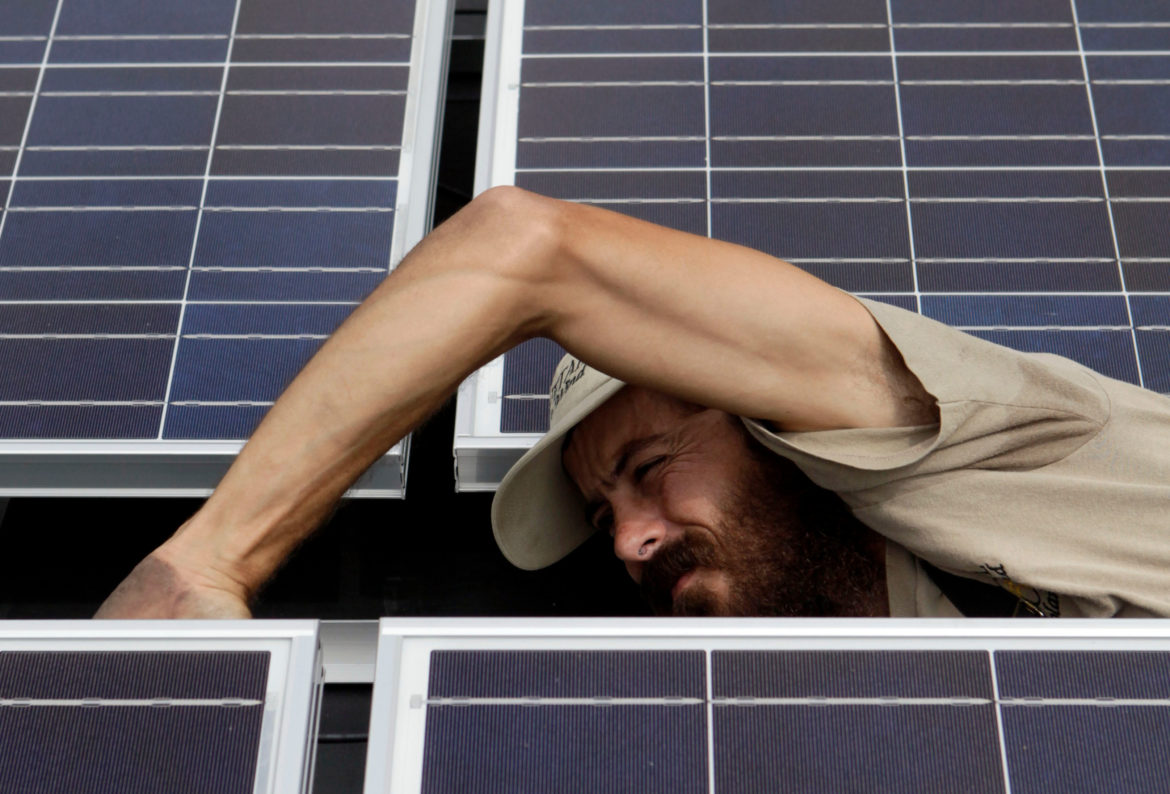 A worker installs solar panels in Westerville, Ohio, in this 2009 file photo.

Hearings continue in the Ohio House this week on the bill, which creates a “Clean Air Program” that would benefit existing nuclear and coal plants.

COLUMBUS, Ohio — Analysts say legislation to subsidize Ohio’s nuclear plants through the creation of a statewide “Clean Air Program” would discourage development of wind and solar energy because it would undermine renewable energy requirements set in place a decade ago.

The bill would eliminate a surcharge allowing utilities to pass along their costs for complying with the state’s renewable portfolio standard, replacing a competitive renewable energy market with subsidies that appear aimed toward existing nuclear and coal power plants.

Terrence O’Donnell, a Columbus-based lawyer who represents wind and solar developers, wrote in comments for the committee that House Bill 6 amounts to a “government takeover of the energy sector.”

In an interview Wednesday, O’Donnell said “We understand Speaker [Larry] Householder and his team are working on revisions to the bill and we are hopeful that the final product will be workable for all parties, including renewables and energy efficiency companies.”

Hearings on the bill continue this week before the House Energy and Natural Resources subcommittee, which includes three new Republican members added by Householder amid rumors the bill as written might not have enough support to advance.

Savings to ratepayers not so straightforward

The entire renewable energy and energy efficiency package, said Householder and the bill’s sponsors, is now adding $4.39 to the average residential customer bill. The new charges, which have no sunset provision, would cost about $2.50.

But the renewable energy charges only amount to 37 cents on average for residential customers, according to the Public Utilities Commission of Ohio.

The remainder of the $4.39 figure, an estimate produced by Householder’s staff, is presumably for efficiency and peak demand programs, and some of the state’s utilities plan to continue the old charges at least until they have paid for previously created expenses. And state regulators can, under existing law, allow utilities to create new customer-paid energy efficiency programs in the future.

Language buried deep in the 27-page bill also makes it difficult, if not impossible, for a solar or wind developer trying to finance a new project to rely on funding from the Clean Air Fund that HB 6 would create.

Wind and solar companies seeking a grant from the new fund would have to apply to the Ohio Air Quality Development Board. And under the language in HB 6, they would have to include “the estimated remaining useful life” of the project, and that “certification as a clean air resource … will permit the resource to reduce future emissions.”

In other words, the bill seems designed to support existing power plants, rather than new clean energy projects, which currently have to compete to show they are the lowest-cost option. HB 6 imposes no such requirement for facilities trying to qualify for the Clean Air Fund.

The bill also excludes solar facilities smaller than 50 megawatts. While there are large solar farms under development in the state, no existing facility would meet the 50-megawatt threshold.

Sean Gallagher, vice president of state affairs for the Solar Energy Industries Association, said he has been puzzled about the inclusion of language in the bill that he says undercuts the renewable portfolio standard, or RPS.

“Legislators in Ohio have been trying to eliminate the RPS since 2014. The governor of Ohio vetoed such a bill in 2014 because it would have eliminated the RPS. This is just another attempt … squeezed into a bill intended to do other things,” he said.

‘A brazen boondoggle of a bailout’

House Bill 6 on Tuesday got its first opponent hearing, which ran for five hours and included three dozen witnesses.

Opponents argued that the new legislation would not only weaken the state’s renewable portfolio standard, but would simply prop up old nuclear and coal power plants unable to compete well with wind and solar or extremely efficient combined-cycle gas turbine plants.

“This bill is a slap in the face to the idea of competitive markets,” testified John Finnigan, lead counsel for the Environmental Defense Fund.

“Ohio’s electric industry is thriving and our energy supply is getting cleaner, with average electricity costs well below the national average. We are the envy of other states,” he said.

“HB 6 would give $300 million a year in handouts to failing coal and nuclear plants. We don’t need these plants to keep the lights on. PJM’s forecasted reserve margin for this summer is nearly 30%, far above what is needed. The bill would gut the renewable energy and energy efficiency standards that have led to more than $1 billion in savings and thousands of new jobs for Ohioans.

“It is an Orwellian twist to call HB 6 a ‘clean air resource’ bill. This bill is nothing but a brazen boondoggle of a bailout for a bankrupt business,” Finnigan said.

In a back and forth with committee members about saving the old plants, Finnigan acknowledged that his organization does not oppose nuclear power.

“We recognize it is a clean energy source,” he said. “We suggest you look at what has been done in other states, what they have done as part of a comprehensive package focused on clean energy.”

Andrew Gohn, eastern regional director for the American Wind Energy Association, told the lawmakers that Ohio’s renewable portfolio standard, though capped currently at 12.5%, is “the strongest tool in Ohio’s arsenal to achieve cleaner air and reduce carbon emissions.” He predicted that HB 6 “will lead to more carbon emissions, more pollution, and greater costs on Ohio ratepayers — achieving none of the stated goals.”

Todd Snitchler, vice president of market development for the American Petroleum Institute, former chairman of the Public Utilities Commission and a former Republican state representative from the Canton area, also spoke against the bill.

“What we have before us in HB 6 is a proposal to upend this progress that is disguised as clean air policy. Let’s be clear, this is not an environmental or clean air policy but rather a corporate bailout play.

“Natural gas generation has been the foundation of Ohio’s major clean air milestones in the past decade,” he said.

“API opposes HB 6 because instead of encouraging innovation and recognizing those who have risked private capital and provided beneficial outcomes without burdening Ohio ratepayers, this bill would effectively destroy the market that has provided these positive outcomes,” he added.

“The practical effect of HB 6 is to direct hundreds of millions of dollars to one company to the exclusion of its existing or potential competitors.”