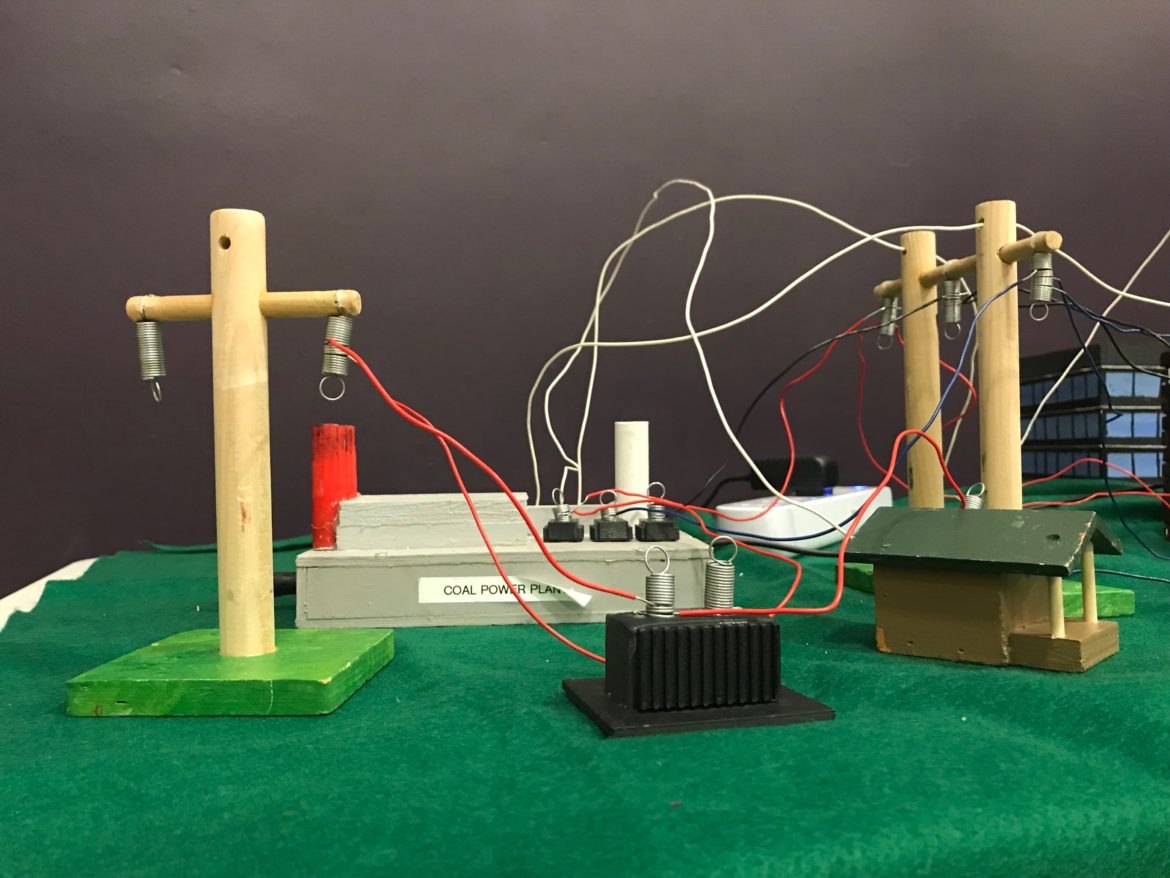 Sharon Bird’s seventh grade science students stand by a tiny model home, ready to demonstrate how technology inside can help save energy and money. With a tap on a touch-screen tablet, they reveal how replacing inefficient lighting or adjusting the thermostat will affect the home’s energy bill.

At the other end of a school gymnasium, classmates use a tabletop town — complete with a flower shop, factory, power lines, and power plants — to explain how technology is changing the way electricity is delivered to communities.

The exhibits were part of a recent energy carnival at Colin Powell Middle School in Matteson, Illinois, about 30 miles south of Chicago. Bird is among dozens of teachers who have used training and materials from a 5-year-old program designed to help teach how technology is changing the electric grid.

“I’ve always taught energy conservation,” Bird said. “But the nice thing about the smart grid [materials], especially the smart houses, is they actually see how that happens.”

The university offers teachers $200 to attend an evening of training, along with additional stipends if they help introduce the curriculum to other teachers, students and parents. The program covers concepts like smart meters, distributed generation, the use of sensors to measure grid load more precisely, and two-way communication between consumers’ devices and utilities. It’s also an introduction for many to concepts like demand response and hourly pricing.

Brad Christensen, a research associate who leads the smart grid curriculum development at Illinois State, said they want kids to understand what the smart grid is and how it works, and they also hope that information trickles home to parents. It’s an important lesson because much of energy saving potential from smart grid technology can only be realized if customers engage with it.

“A lot of the parents we get now have smart meters” in their homes, Christensen said. “They don’t know what it is; they don’t know how it works. They just know they have it.” But when they learn about it here, “they start to realize that the smart meter is going to allow them to monitor their use better.”

The curriculum starts with a history lesson, going back to 1769 and the patent of the modern steam engine. Then it guides students through the first human electricity generation in the 19th century and the gradual expansion of the electric grid, while the students wire and light the pieces of their tabletop communities.

Finally they end up in the present: a fully functioning miniature grid that they can attach sensors to and detect outage sources quickly and precisely, the way utilities aim to do on a real-life scale.

“What we discovered very early on was that before the students can have any grasp at all of the smart grid, they have to realize what problem the smart grid is trying to solve,” Christensen said.

Rose Mabwa has used the smart grid curriculum for the past five years at Chicago’s Oakley Square affordable housing community, where she’s the senior manager. Partnering with Illinois State has helped increase the reach of this education, said Mabwa, who leads workshops for groups ranging from young children to adults. “There are a lot of kids and parents that miss out” without it, she said.

The program is continually evolving, especially the smart homes. This year, Illinois State developers plan to reprogram the homes so students can see energy use more clearly in real time on the tablet. They’re also adding a video game that simulates community activism, allowing students to knock on doors and share information with virtual neighbors about efficiency and conservation.

By 2020, Christensen hopes for the houses to have working solar panels and wind turbines, allowing them to be net neutral in their electricity consumption. “We want the students to see what’s possible in the future concerning energy use and energy conservation,” he said.

The energy carnival where Bird’s students set up the models was part of another energy education initiative called the National Energy Education Development, or NEED, Project. It began in 1980 as a one-day program to teach students about energy use and conservation. Since then, it’s grown into a full curriculum that elementary to high school teachers can use to educate their students about energy generation, delivery and policy in the United States.

Smart grid technology was introduced in the curriculum in 2010, when PG&E requested smart meter education for California students, said Mary Spruill, NEED’s executive director. Since then it’s expanded, with teachers in different states focusing on different topics, depending on where states are in their grid updates. NEED often partners with utilities to develop lessons, including ComEd in Illinois. The Energizing Student Potential program, a STEM project that NEED coordinated with ComEd, Nicor, BP and others, has 82 participating schools for the current school year, according to the NEED website.

U.S. education hasn’t traditionally focused on energy, Spruill added. Teachers often don’t receive strong training when they earn their degrees, and in turn they don’t focus on it in the classroom. But she said that a comprehensive energy program — focusing not just on the science of generation or grid technology, but also policy — is valuable.

“We see success when a school uses energy as a unifying theme or chooses to use integrated learning,” she said.

NEED’s school programs include carnivals like the one at Colin Powell Middle School, where students in other science classes set up posters describing energy sources like coal, nuclear power, propane and solar, and led their guests through games to help them understand these resources.

It also includes activities like an energy audit Bird’s seventh graders conducted on the school with help from a professional auditor paid for by NEED. During their assessment, students noticed, among other things, that classroom lights are often on when rooms aren’t in use. Now they’ll present their conclusions to the principal.

The NEED curriculum has changed considerably in a relatively short time as new energy sources have come into use. “Twenty years ago, we never thought we’d be looking at hydraulic fracturing,” Spruill said.

She anticipates the program will evolve more in the coming years, especially as transportation electrification and energy storage develop. “I’m hopeful we’ll see a lot of change in the storage sector,” she said, noting the resilience storage can add to the grid. “We’re ready” to update the curriculum, she said. “We just need the technology.”