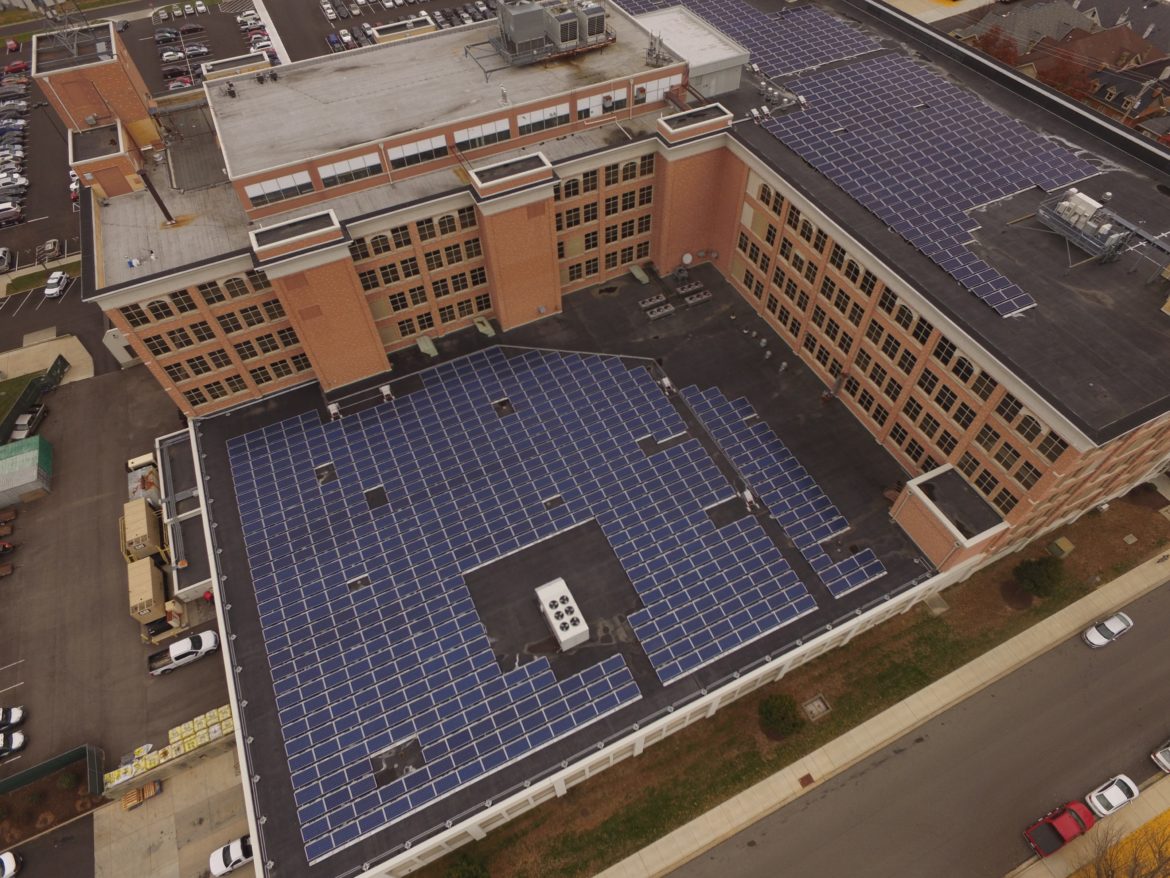 Both new construction and retrofits can move to net-zero greenhouse gases and save money, experts report.

Buildings account for nearly four-tenths of U.S. energy consumption through heating, cooling and other electricity use, according to the Energy Information Administration. And if that energy comes from fossil fuels, it releases more greenhouse gases that drive human-caused climate change.

“If we’re going to make a dent in our carbon footprint, we have to attack the building industry,” said Steve Melink, president and CEO of Melink Corporation in Milford, Ohio.

Melink recently completed upgrading the company’s existing LEED Gold-certified headquarters building to have zero net emissions and is in the process of constructing a second net-zero emissions building at that campus. Melink Corporation is in the business of energy efficiency, solar energy production, geothermal energy and other aspects of clean energy and healthy buildings.

Fifty miles north, the University of Dayton sprawls over more than 370 acres. Like other universities, it has committed to move to carbon neutrality by 2050.

Both organizations shared their approaches to zero-energy buildings last week at the Ohio Environmental Protection Agency’s 2019 Sustainability Conference in Columbus.

Get a grip on emissions

“The best place to start in your institution is just to try to break down where your emissions are coming from,” said J. Kelly Kissock, who heads up the university’s Industrial Assessment Center and renewable and clean energy graduate program.

Electricity use accounts for about 71% of his university’s energy consumption, with on-site combustion for heating adding another 28%. The remaining tiny bit of energy use comes from campus vehicles.

“Push energy efficiency,” Kissock continued. The cheapest energy is that which you don’t use, he noted. Plus, he added, energy savings can help pay for renewable energy for the rest of the buildings’ load.

Steps like moving from T8 fluorescent bulbs to LED lighting could provide up to 35% savings, with dimming controls and occupancy sensors adding more savings, he noted. Moving to LEDs could provide especially huge savings for areas using other kinds of lighting, such as university sports venues with metal halide lights.

Last year Melink Corporation installed more than 4,000 solar panels at the University of Dayton. The panels will provide roughly 2% of campuswide power and avoid greenhouse gas emissions from roughly 1.4 million pounds of coal per year.

Other electricity needs for the university or other organizations can also be supplied by buying renewable energy from the grid, Kissock said.

Melink’s headquarters relies on arrays of solar panels to provide the bulk of its electric needs over the course of a year. A small 60-foot wind turbine provides supplemental power. Although the facility draws power from the grid during the winter, the result is still net zero because extra power is fed onto the grid during the spring and summer, Melink said.

Add geothermal to the mix

Geothermal energy also fits into both experts’ approaches. Basically, groundwater with a relatively constant temperature of around 50 to 55 degrees Fahrenheit is pumped through buildings and used for both heating and cooling systems. The result is that it takes less energy to warm a room up in the winter or cool it down in the summer.

In Dayton, manufacturing plants that used to pump groundwater for their operations have shut down over the last several decades, Kissock noted. As a result, the water table in the area has gradually risen. Consequently, the University of Dayton must already pump substantial amounts of groundwater to keep building basements dry, especially in parts of the campus near the Miami River, he said.

Meanwhile, Melink’s company has been developing a “super-hybrid” system with phase change materials and heat pumps to reduce the number of wells and volume of water needed for geothermal energy.

The concept of phase change materials is similar to what happens when water freezes to ice or melts back to water, Melink said. In each case, the process either releases or absorbs heat energy. In this case, however, the material would move from one phase of matter to another at around room temperature. As the material absorbs or releases heat energy, less energy would be needed to heat or cool the room.

Transportation makes up a tiny share of the University of Dayton’s energy use, but it’s still significant, Kissock said. The university could move to electric vehicles for its vans, buses, carts and other vehicles and save money over time, he noted.

“That’s adding electric load to our building,” Melink said, but the net effect over the course of the year is still zero emissions.

Kissock foresees continuing savings from the move to cut greenhouse gas emissions as well, especially in the area of energy efficiency. Savings keep growing as technology keeps getting better, he noted.

Melink likewise expects net savings over time. Plus, the premium for going to net zero was not as huge as some might suspect, he said. Conversion of the first headquarters building cost about a 20% premium over earlier building costs. Melink expects the premium for the second, new building will come in at roughly 8%. The company will reap energy cost savings from the net-zero buildings over time, he added.

But benefits aren’t measured only in money. “Everything we’ve done … has allowed me to attract and retain higher quality employees,” Melink said. Plus, taking the lead on a net-zero headquarters has identified his company as a leader in the industry.

Clean energy also matters for the University of Dayton’s mission to educate young people, Kissock said. Growing concern about climate change is a big factor as well for the Catholic university.

“Are we just going to kick the can down the road and ask our children and future generations to try to clean up our mess?” Kissock asked. “Or are we going to address it now and exert some kind of responsible leadership?”