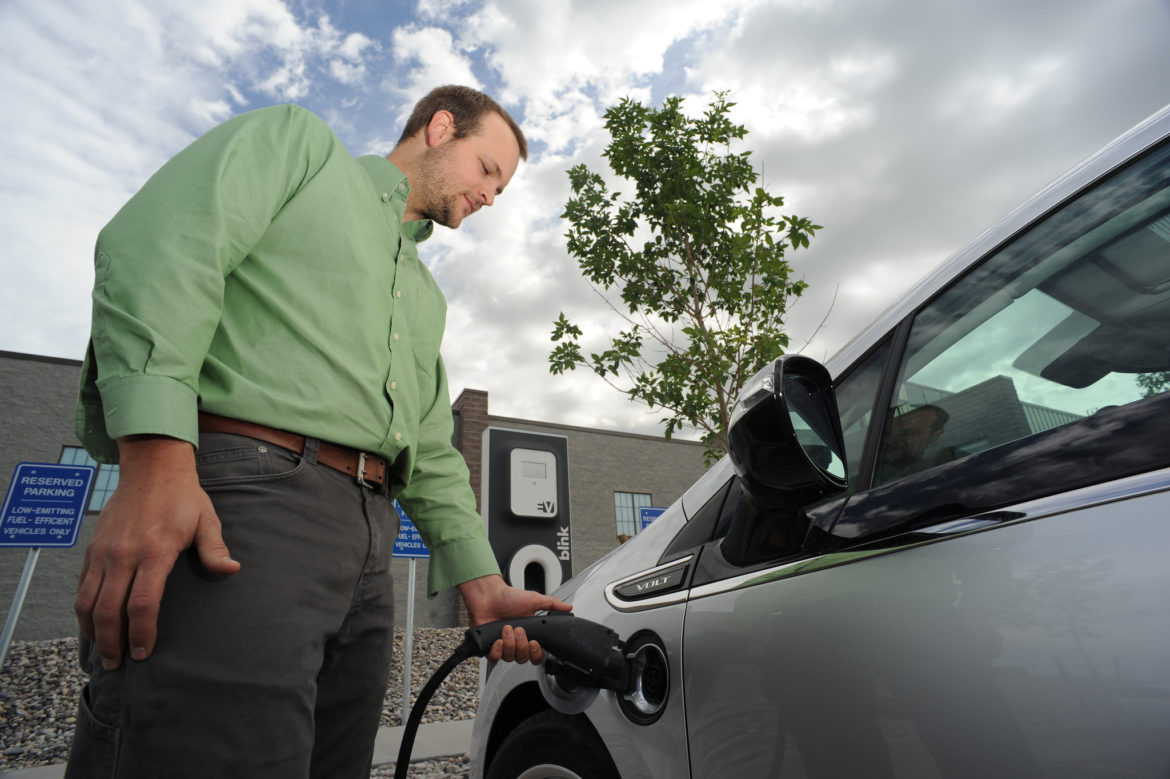 Businesses get on board with government to bring more electric vehicles and public transport to a city poised to grow.

Outreach to car dealers, employers and the public is helping Columbus, Ohio, accelerate the move to clean transportation.

“Transportation is a driving generator of greenhouse gas emissions,” said spokesperson Jennifer Fening of the Columbus Partnership. She reported on progress in her keynote speech last month at the Ohio Environmental Protection Agency’s 2019 Sustainability Conference.

Transportation is the largest source nationwide of greenhouse gas emissions, with a 29% share in 2017, according to federal EPA data. And the share for transportation in Ohio in 2016 was 30.5%, according to the Energy Information Administration. (The state’s electric sector still accounted for almost four-tenths of Ohio’s carbon dioxide emissions that year.)

The Smart Columbus program aims to tackle the problem by increasing electric vehicle use, public transit and ride-sharing.

The program began when the U.S. Department of Transportation issued its first Smart City Challenge at the end of 2015. Columbus beat out more than six dozen competitors for a $40 million grant. An additional $10 million grant came from the Paul G. Allen Family Foundation, along with more than half a billion dollars worth of investments and other commitments from businesses.

“Our goal by the first quarter of 2020 is to drive EV adoption to 1.8%” of new car sales, Fening said. That sounds small, but it’s five times the 0.37% for the seven-county central Ohio region at the end of the first quarter of 2017, which is the program’s baseline. And even the small increase in market share could jump-start further sales.

Nationwide, electric vehicles accounted for about 2% of all new car sales in 2018.  California was in first place with just over 7.8%.

The Smart Columbus program educated dealers so salespeople could talk knowledgeably about all-electric and hybrid electric models, instead of steering people to more familiar gas-powered cars.

Yet getting more electric vehicles into Ohio was something of a roadblock.

“It’s difficult to sell a vehicle if you don’t have it,” said Matt Ringlien at Dave Gill Chevrolet in Columbus. Manufacturers have been sending the largest numbers of electric vehicles to the coasts, where market share is greater, he noted.

Another bump in the road was that Ohio didn’t have legal targets setting numbers of electric vehicles to be made and delivered to the state, which California and some other states have.

“Absent those policies, we really needed to create a market on our own,” Fening said. With more dealer interest, deliveries into the state have started to inch forward.

“That test drive is something we’ve found is really transformational in that educational experience,” Fening said.

Smart Columbus also goes out to workplaces, so employees can sign up for a 30-minute test drive experience. “We will come for a day or a whole week with a fleet of 12 to 15 vehicles,” Fening said.

“We have loaned the group a Volt and Bolt from our own inventory to help the Chevy brand of EVs get exposure to hundreds of employees at local businesses,” Ringlien said. Sales leads and referrals have resulted, he added.

Smart Columbus also got 60 local employers on board, including Chase and Huntington Banks. People are “70% more likely to consider an electric vehicle if there’s EV charging at work,” Fening said.

Smart Columbus set a goal of 300 electric vehicles for public fleets in the area, with the city government committing to two-thirds of that number.

“It makes business sense,” Fening said, noting the cost savings when there’s less maintenance on a vehicle and no need to buy gasoline.

Four of every five cars commuting to work in the seven-county region around Columbus are single-occupancy vehicles. And planners expect another million residents in the region by 2050, which will mean more cars on the roads and more emissions unless big shifts occur.

Cutting down on single-occupant vehicles can also cut down on traffic congestion. Last year the average driver in Columbus spent about 71 hours per year in congestion, according to INRIX. (The national average was about 97 hours.)

Smart Columbus has used small seed grants to spur local businesses to take more steps to get employees to drive less. One company offered a $2,000 rebate on electric vehicles within a seven-county area, for example. White Castle and other employers also made free bus passes available for employees. “They were able to see employee retention go up,” Fening said.

Smart Columbus also aims to make more scooters, bikes, community circulators and hopper carts available for people to get around the area without driving their own car. In addition, Smart Columbus introduced the state’s first self-driving shuttle in December. About 5,600 riders have ridden so far, Fening said.

An app for that

Smart Columbus is also working with the Central Ohio Transit Authority to develop a phone app that will let people easily see how different modes of transportation compare with each other and then pay for their choice through passes, Fening noted.

Smart Columbus wants its success to spread to other areas as well, Fening said. “Our whole playbook is on our website,” she said, including sample contracts, educational materials on electric vehicles, data sharing and more.

By November 2018, Smart Columbus has already gotten the share of electric vehicles up to 2% of new car sales. (Roughly 165 new electric vehicles were sold that month.) But, Fening said, “I wouldn’t say ‘mission accomplished’ just yet.”

The federal tax credit incentive for electric vehicles dropped to a lower rate this year. That likely caused a “run-up” in demand before the end of 2018, she explained.

“Overall, we’re very optimistic that we’re on track” for meeting the 1.8% goal for electric vehicle sales by 2020, she added. And that’s even with the ongoing challenge of getting manufacturers to ship more electric vehicles into the state.

Fening is also optimistic about the other aspects of the Smart Columbus program to encourage public transit use and ride-sharing. And she credits a close relationship with area businesses with much of the program’s progress in speeding up the move to cleaner transportation.

“Columbus is a town where a lot of our workforce works for very large entities,” Fening said. By working with them to promote clean energy transportation, Smart Columbus hopes it can “influence the vast majority of trips in the community.”