Photo By
Science Museum of Minnesota 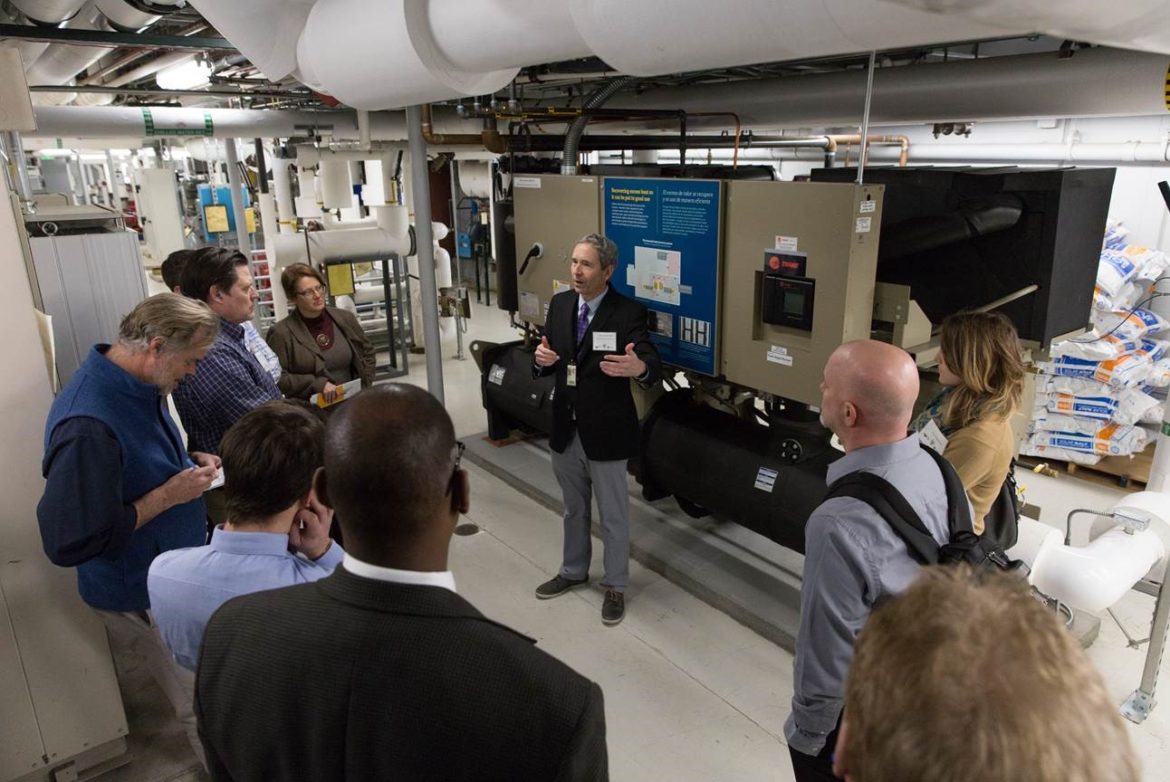 An advanced heat recovery system saves money, slices carbon emissions, and serves as a tool to teach others about the technology.

One of the important attractions at the Science Museum of Minnesota is hidden away deep in the interior of the building. Yet people still find it interesting and inspiring.

At first glance, it’s not all that impressive. The advanced heat recovery system resembles a backyard grill crossed with a water heater, decked out with an enormous fuse box and pipes running here and there. It looks like something that might win top honors at a high school science fair for cooking 250 hotdogs at once.

What’s impressive is that it prevents about 1.8 million pounds of carbon dioxide from being released into the atmosphere each year, cutting the museum’s carbon footprint by 16%. This is significant in the fight against climate change, said Patrick Hamilton, the museum’s director of global change initiatives, because buildings account for one-third of U.S. greenhouse gas emissions, according to the Alliance to Save Energy.

While grants covered the cost of the Science Museum project, Hamilton estimated that the system otherwise would have paid for itself in three years.

“We love that,” he said, “because it means we have $293,000 that can be redirected to the scientific and educational mission of the museum rather than to paying utility bills.”

What is heat recovery?

So, what’s the amazing technology that accomplishes all this? Two heat recovery chillers (think of very large versions of the heat pump in your refrigerator) capture excess heat produced by the museum’s lighting, electrical, and mechanical systems. The heat is then used to warm the building during colder months.

The result is lower energy use, and that translates immediately into plummeting carbon dioxide emissions and smaller heat bills. Hamilton said that the museum’s heating costs are down 65% since the system began operating in 2015. For instance, on a 4oF February morning, the museum was purchasing no heat from a local utility.

Here’s how it works. Heat generated by all the electricity used by the museum’s computer servers, elevator motors, telephone switching equipment and other big electricity loads is piped into the two heat recovery chillers rather than being rejected to the outside, as is standard procedure in most commercial buildings. Inside the chillers, compressors step up the heat energy to produce 115 oF water, which then is used to warm incoming winter air and circulated through radiators along the building’s extremities.

“You don’t throw your aluminum in the garbage at home. You recycle it. So, you should recycle the heat in your building instead of throwing it away,” said Matt Spresser, account manager at Ingersoll Rand, which manufactures the Trane chillers used at the Science Museum.

The museum embarked on the heat recovery project as part of its educational mission. “This project proves you can save money and help protect the climate at the same time,” Hamilton said.

“What was learned at the museum is that any building over 100,000 square feet can use this technology,” Spresser added. “It’s a no-brainer for energy savings.” Regions Hospital in St. Paul, the Minneapolis Institute of Art, and the Minneapolis College of Art and Design have all approached the Science Museum seeking more information about the technology.

Another success story is the Evansville State Hospital in Indiana, where installation of heat recovery chillers manufactured by the Multistack firm reduced heating bills so dramatically the local gas utility sent out a technician to see if the meter was broken, according to Mark Platt, a manager for Trane speaking at a Science Museum green energy event.

Hamilton is also tracking progress on applying the technology to reduce individual households’ energy use.

The same principles can work in homes, he said: “The water heater could be used for dehumidification while also producing hot water, and warm air from the clothes dryer that is now vented outside could be used to heat the basement or house. Water heaters with heat pumps can extract heat energy from the ambient air surrounding them and transfer that heat to the water inside the tank, while causing water vapor to condense, get collected and directed to a drain.”

Solberg calculated that 75% of energy use and costs for heating could be eliminated in commercial, health care and residential buildings through advanced heat recovery. He pointed to a new health club in Edina, Minnesota, that is already saving on construction costs and is projected to see 50% lower operating costs.

Solberg said while the technology is common in Europe and Japan, high upfront costs may cause sticker shock even though the projects save lots of money over the long run.

Spresser added that many construction companies and clients still don’t consider it as a practical solution. “People believe it’s a lot more complicated than it really is.”

Birth of a breakthrough

The Science Museum’s quest to become the first non-industrial facility in the Twin Cities region to adopt an advanced heat recovery system began the day Scott Getty, who handled the museum’s electricity account with Xcel Energy, called up Hamilton in August 2008 with a big idea: “Let’s make the Science Museum an exhibit in itself about energy efficiency.”

The Science Museum went forward with the idea, using financial support from Xcel Energy to contract with Solberg to conduct a thorough energy audit of the museum in summer 2010.

Solberg is an internationally known expert on “exergy” — the science of matching the energy you need to the energy you use. He’s worked for both the U.S. Department of Energy and the Paris-based International Energy Agency looking at ways to combine building systems to improve energy efficiency.

“It’s a more holistic approach,” he said. “Too often, people put the heating systems, cooling systems and lighting systems each in their own little silo, instead of putting them all together.” Advanced heat recovery technology is one of the most common forms of exergy in practice today.

Solberg reported in fall 2010 that electricity coursing through the Science Museum degrades into heat energy amounting to more than 20 billion British thermal units annually — to which Hamilton replied, “Gee, Dave, that sounds like really big number.” So Hamilton translated that figure into a more easily understandable example: Although comprising just one building, the Science Museum’s electricity use at the time was equivalent to that of 300 houses covering 18 blocks in St. Paul.

Then Solberg asked a pointed question. “You are throwing that energy away and then you are buying an enormous amount of heat energy. Why?” Hamilton paused a moment before answering, “Well, because no one ever laid it out to the museum in those terms before.”

With gifts from Target, Ecolab and Wells Fargo, and a low-interest loan from the Saint Paul Port Authority, the museum began its groundbreaking energy retrofit in fall 2013.

As the work started, Hamilton noticed another obvious benefit of heat recovery — well-paying local green jobs. “I was impressed by the large number of skilled tradespeople coming through this building over the course of 18 months to work on the project — electricians, pipefitters, software technicians, riggers, concrete workers and truck drivers.” The heat recovery chillers were manufactured at the Trane plant in La Crosse, Wisconsin.

“There are enormous economic and employment opportunities in addressing climate change,” Hamilton said.

The success of the project has spurred the Science Museum to adopt other green measures to boost the environment, save money and inspire other building owners to do the same:

Hamilton said: “We’ve been able to help pay for these energy efficiency improvements with the money we’ve saved with our advanced heat recovery system.

“Imagine the enormous economic, employment and environmental benefits that could be realized if energy efficient buildings were not rare but commonplace in the U.S.”

This article was produced with support from the Carolyn Foundation.

Jay Walljasper — author of The Great Neighborhood Book — writes and speaks about widely about creating a greener world. He is also an urban writer-in-residence at Augsburg University in Minneapolis. Connect with Jay at jaywalljasper.com.