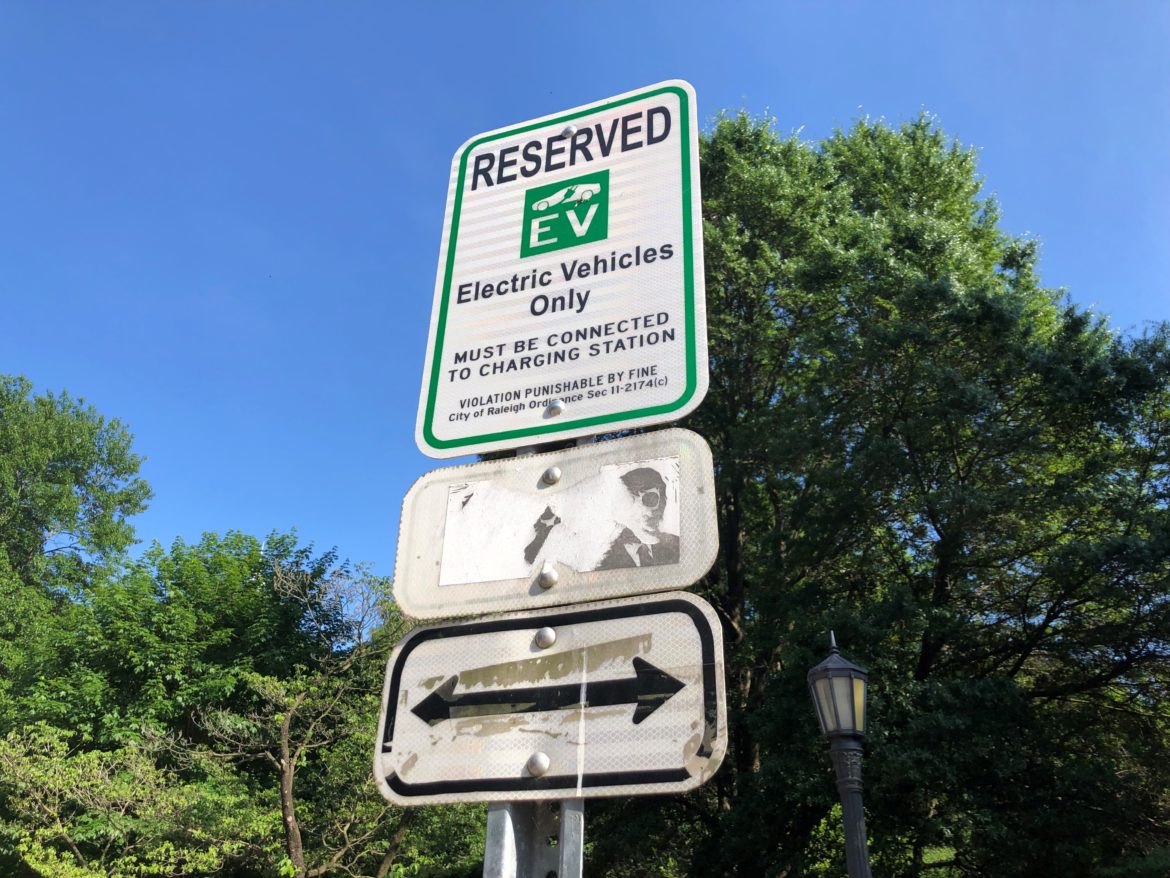 Raleigh is the only city in North Carolina with a specific prohibition on blocking electric vehicle charging stations.

Meanwhile, a bill that would fine drivers for blocking charging stations advances in the House.

Some North Carolina state lawmakers want to fine drivers of gasoline-powered cars for blocking charging plugs for electric vehicles. Others want to hike annual registration fees for plug-in cars to become the highest in the country.

“On one side, you’ve got something good for [electric vehicles], on the other — really just the worst,” said freshman Sen. Wiley Nickel, a Democrat from Cary, who authored a bill (S511) to outlaw blocking charging stations and has fought against raising electric vehicle fees.

For now, Nickel’s bipartisan camp seems to be prevailing in the Republican-led General Assembly. A House panel passed a companion (H788) to his Senate bill on Tuesday, while another committee rejected the increase in registration fees. In the Senate, the hike in fees has cleared three committees but now appears stalled.

There’s no official end date for the legislative session, but lawmakers are supposed to adopt a budget by the end of June, leaving plenty of time for these trajectories to change. That’s why Nickel and other plug-in backers remain vigilant on the proposed fee hikes.

“It’s my top priority to kill,” he said. “We’re trying to encourage the growth of electric vehicles. What message does it send if we’re the most expensive state in the country to drive an EV?”

North Carolina’s plug-in vehicle market is middling compared to other states, but growing rapidly. In 2017, it ranked 29th nationwide, with about one plug-in for every 1,000 people, according to the U.S. Department of Energy. By the end of this year, electric cars are expected to exceed 13,500, according to ChargePoint, the nation’s largest network of plug-in stations.

In both vehicles and charging plugs, “you’re higher than average in terms of growth rate over the last year,” Mike Waters, ChargePoint’s director of utility solutions, told a North Carolina energy conference audience in Raleigh this week.

But as the number of electric vehicle drivers in the state has grown, so have their challenges. Some lawmakers have zeroed in on plug-ins to rescue a depleted highway fund, a solution critics say is misguided and unjustifiably punitive. And — as across the country — they’ve fallen victim to the small number of conventional car and truck drivers intentionally blocking access to charging plugs.

‘Something good for EVs’

Nickel was the sixth person in the state to buy a Model S, the first electric car from California-based automaker Tesla. So, he took notice last December when a row of pickup trucks parked in front of a group of charging stations at a Sheetz gas station in Hickory, a small town about 50 miles northwest of Charlotte.

The incident caught fire on the social networking site Reddit and soon made its way into mainstream media outlets. According to the post from a user named Leicina, the truck drivers yelled profanities about Tesla until a station employee told them to leave.

“I’ve never had a supercharging experience like this one,” Leicina wrote. “Who do you report activity like this to?”

In most of North Carolina, the answer is no one. Under state law, able-bodied drivers caught in parking spots reserved for disabled people can be fined at least $100. But only the city of Raleigh imposes a penalty specifically for cars and trucks that block access to chargers; Charlotte uses a general parking ordinance to go after violators.

Nickel and a bipartisan group of his colleagues hope to change that. Republican Sens. Vickie Sawyer of Iredell County and Bill Rabon of Brunswick County, the chair of the powerful rules committee, are cosponsors of Nickel’s bill. An identical measure from two Democrats and two Republicans in the House cleared a transportation committee this week with no dissenting votes.

“I have heard of no opposition to this bill,” sponsor Rep. Julie von Haefen, a first-year Democrat legislator from Raleigh, told the panel. She added that she’d received positive feedback from constituents who drive electric vehicles. “I believe this is a reasonable solution to our current problem.”

Rep. Harry Warren, a Republican from Salisbury and another sponsor of the measure, said it was important given the state’s prominence as a tourist destination. “If we’re going to maintain our status,” he told his colleagues, “we have to plan ahead and facilitate the growing EV market.”

“That’s one reason this bill works so well with one of the other bills Rep. [John] Szoka and I put out this year,” Warren added, referring to a measure that is expected to expand the free market for charging stations, which cleared the full House earlier this month.

Despite its broad support, the bill blocking charging plugs still has a long way to go before becoming law: It needs to clear three more committees and the full House before moving to the Senate.

If the threat of a $100 fine does become reality, it won’t stop the practice of blocking chargers altogether. But backers say the measure sends the right signal to electric vehicle drivers.

“This is a good way that North Carolina can help support electric vehicles and their continued growth,” Nickel said.

‘A black eye for the state’

By contrast, Nickel says, a Senate bill (S446) to raise annual registration fees to $230 for all-electric vehicles and $115 for hybrid plug-ins gives the state a bad name.

Supporters of the bill say it’s necessary to make up for lost gas tax revenue to the state’s highway fund. Electric cars use the roads, they argue, but don’t pull their weight in taxes.

“The purpose of this bill is to bring parity,” said bill sponsor Sen. Jim Davis, a Republican from the state’s most southwestern counties, during a committee hearing.

Opponents question this logic, pointing to a study from the North Carolina Clean Energy Technology Center showing that all-electric cars on the road today — because of their size and make — would contribute an average of $100 in gas tax revenue each year if they ran on gasoline. The current registration fee is $130.

“Electric vehicles are already paying more than their fair share,” said Cassie Gavin, a lobbyist for the North Carolina Sierra Club, in an April memo to lawmakers. Increasing fees, she continued, “goes against the grain of both consumer choice and market competition.”

Plug-in hybrid electric vehicles weren’t examined in the Clean Tech Center study, but many observers point out that they run mostly on gasoline and are already contributing to the highway fund.

Nickel also said the state’s some 10,000 electric vehicles are hardly the reason the state’s highway fund is running low. “The real problem with highway funding is the increased fuel efficiency of vehicles,” he said.

“I think you’re picking winners and losers here,” Nickel told senators during a hearing on the Senate bill. “It’s going to be a big black eye for the state if it becomes law.”

For the moment, the prospects for increased fees look iffy. The Senate bill, having passed three panels, was scheduled for floor vote April 17 but then referred back to the rules committee, and hasn’t moved since. House lawmakers briefly included increased fees in their version of the budget but removed them Tuesday in the Finance Committee.

According to staff from the office of Rep. Szoka, the Republican of Fayetteville who is one of three senior chairs of the committee, the elimination was on both procedural and substantive grounds: The fees weren’t discussed among the three chairs, and Szoka, for his part, didn’t support them.

At the Raleigh energy conference, some attendees fretted over the fees and asked the state’s top environmental official, Michael Regan, if Gov. Roy Cooper, a Democrat, would veto the increase if it cleared the General Assembly.

One questioner said the fees ran counter to Cooper’s climate executive order, calling for 80,000 electric vehicles in the state by 2025. “It seems antithetical to the goal,” she said.

Regan agreed, but stopped short of promising a veto. “It seems to me significantly out of touch and out of step,” he said. “My hope is that it does not make it to the governor’s desk. I have not talked to him about what he would do if it does.”