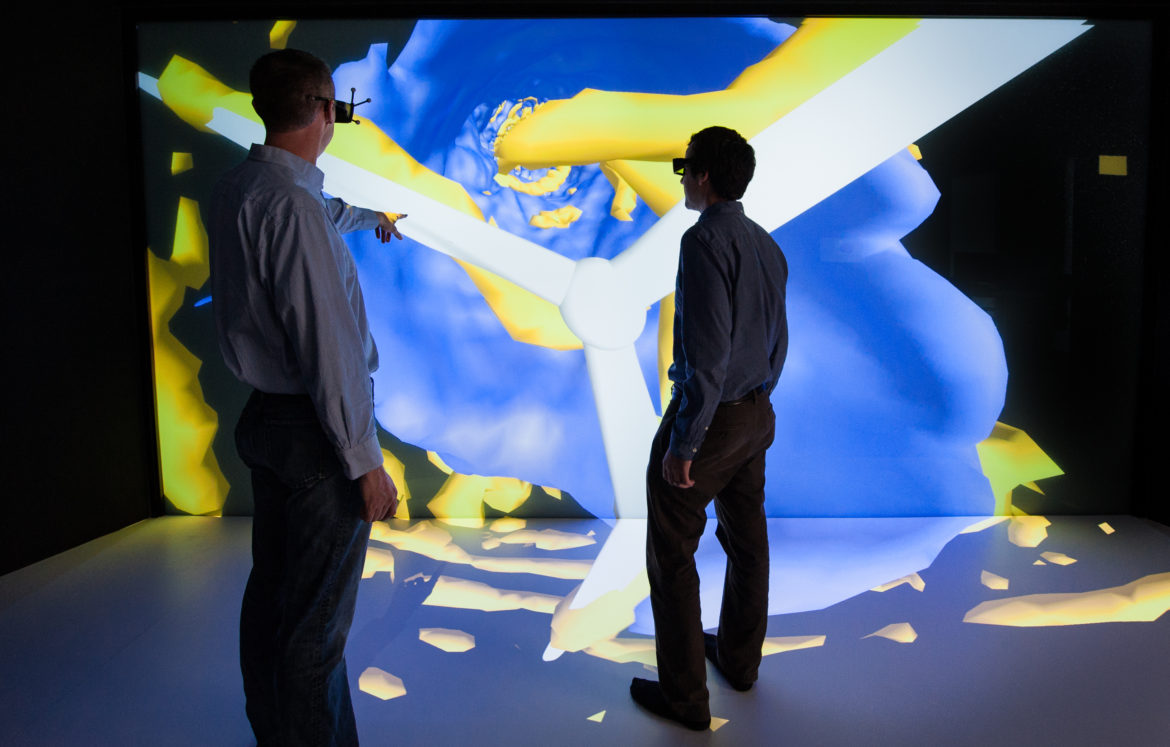 Researchers Pat Moriarty, left, and Paul Fleming review velocity (blue) and turbulence (yellow) in a simulation of a wind farm at the National Renewable Energy Lab.

Wind farms could boost output and revenue by orienting turbines to minimize wind wake disturbance, according to a theory being tested by federal researchers at a wind farm on the Nebraska-Colorado border.

The National Renewable Energy Laboratory estimates “wind steering” could increase electricity production up to 2%. For a 300-megawatt wind farm, that could mean roughly $1 million more in annual revenue.

“We have a lot of interest from developers and manufacturers,” said Paul Fleming, a researcher at the national lab who specializes in the control of wind turbines. His team is conducting the experiment at a NextEra wind farm.

Henrik Stiesdal, a Danish engineer who in 1978 invented one of the first wind turbines and now runs an innovative technology company, is a believer.

“Wake steering has the potential to reduce wind farm wake losses significantly,” he said in an email.

Wind farms typically are oriented so that every turbine faces directly into the predominant wind. While that positioning maximizes production from the leading turbines, the turbines behind them tend to suffer. Spinning turbines leave a V-shaped wake in which other turbines generate as much as 50% less power than the leading ones.

It’s been estimated that tight, uniform orientation reduces overall wind farm energy production by roughly 10%, Fleming said, compared to what the turbines would produce if widely spaced so their wakes wouldn’t interfere with one another.

For several years, engineers at the national lab used a wind farm simulator to tinker with various ways to manipulate turbine wakes. Last May they began field-testing it in a group of five turbines, turning the motor and blades to sit at a different angle on top of the towers so that wake did not interfere with turbines downwind.

As expected, that adjustment diminishes what any given turbine produces in isolation. But it also reduces losses from wind wake. Essentially, their method of “wake steering” manages turbine operations as a fleet instead of individually.

The first phase of the experiment at the NextEra farm produced a set of findings as to how far each turbine should turn its face away from the wind. That study assumed a steady or slow changing wind direction. The second phase, now underway, assumes more variable wind directions.

“We decided it would be better to design for uncertain flow — to factor in uncertainty,” Fleming said. He suspects this second, more realistic phase will lead to a slight reduction in energy production.

Stiesdal said: “Wakes sometimes meander, making slow crosswind undulations, and they often follow curved trajectories, particularly in complex terrain. Therefore, it may require very elaborate measurements to monitor where the wakes actually go when deciding how much to deflect.”

Stiesdal agreed that the greatest potential is in the ocean, because the wakes persist longer there than they do on land, meaning that a change in the turbine’s direction will have an effect over a longer distance.

The group’s research isn’t completed and questions remain. Any net increase in energy production could be offset, to some extent, by increased wear and tear on the machine, Fleming cautioned. Also, adjusting turbine orientation could affect manufacturer warranties.

Fleming is not predicting when researchers’ findings will be ready for adoption by wind energy developers. Results to date need to be replicated in other experiments, he said, and costs and benefits must be calculated. Nevertheless, he has high hopes for its real-world applicability.

“Because of the positive outcomes I’ve been seeing,” he said, “I would say the likelihood of wider usage has increased in the past few years.”