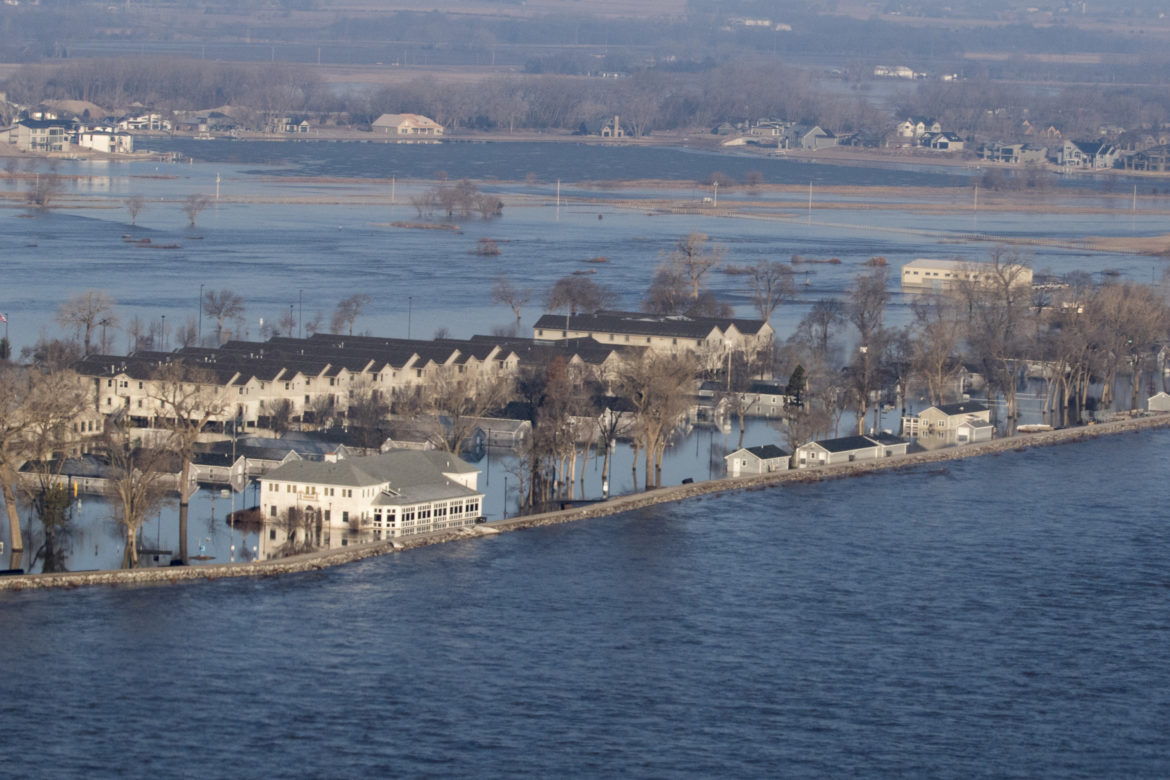 Floodwaters surround Camp Ashland, Nebraska, on March 17, 2019. Flooding across the state displaced hundreds of people and caused millions of dollars in damage to homes, farmland and cities.

Extreme weather this spring hasn’t prompted members of the Nebraska Public Power District board to consider a speedier shift from fossil fuels.

While scientists warn that climate change is a likely factor in the unprecedented flooding that inundated eastern Nebraska in March, directors at the state’s largest utility largely do not see the event as a call to hasten the utility’s transition away from fossil fuels.

“I don’t think the … flood has necessarily affected the thinking of the board very much,” said Gary Thompson, chairman of the publicly elected board of directors of the Nebraska Public Power District, or NPPD.

The flood was estimated to have caused about $1.3 billion in damage to roads, dams, levees and other structures, as well as farm crops and livestock. Three Nebraskans died as a result. One of them was a man swept from his home downstream of the Spencer Dam, an NPPD hydropower facility that collapsed under the pressure of heavy rain and large ice chunks.

Workers at the utility’s Cooper nuclear plant, located on the Missouri River, had to be ferried in by helicopter after roads were cut off. Had the river risen another two feet, the plant would have shut down.

Thompson, from Clatonia, remarked that he was “not terribly surprised” by the flood and its aftermath.

“I have recognized that climate change is causing these extreme events we’ve seen around this country and the world for several years,” Thompson said. “[The Nebraska flood] reaffirms my feelings about it.”

Although he views the flooding as a consequence of the warming world, Thompson didn’t exactly advocate accelerating the utility’s shift away from fossil fuels and the adoption of more renewable generation. Currently, NPPD derives about 65% of its electricity from non-carbon-emitting sources, including 48% percent nuclear and 8% each from wind and hydropower.

What he did advocate was to prepare for government carbon-reduction mandates that he thinks are likely.

Fred Christensen, an NPPD board member from Lyons, concurred that “there’s a very good chance that climate change is affecting our weather. I don’t think anybody can prove it, but I lean towards that position.”

His flood-related concerns, he said, are of a more immediate nature: washed-out roads that prevent crews from reaching transmission towers and other infrastructure that requires repair and maintenance, for example.

“As far as the future, we’re working probably as much as we can towards renewables and non-emitting sources of power. Sixty-some percent of our energy source is non-carbon-emitting, which in the industry is very good. We’re working towards more of that all the time.”

Recently, for example, NPPD announced an 8.5-megawatt community solar project it will develop with the City of Norfolk.

Getting in the way of more aggressive adoption of renewables, in Christensen’s view, is money.

“We’ve got a lot of customers and board members who would be very, very hesitant to do more than we are doing now. They are very conservative and don’t want to spend too much money. They feel a responsibility for the lady on the end of the road who is on a fixed income.

“To do too much, we have to increase our rates and that is just not in the cards. Maybe it should be, but right now it isn’t.”

Other board members read little into the floods that left a lot of farm ground so saturated that farmers couldn’t get into their fields to plant crops.

“We’ve had some weather,” said Bill Johnson, from Pilger. “There’s all kinds of different theories out there. I went to a wind and solar meeting yesterday, and the lady there was well-read on climate change and she was saying it was due to the wind towers causing turbulence in the atmosphere.”

The comment Johnson references was likely referring to a commonly misunderstood 2018 study that identified a temporary, localized warming effect around wind turbines. Climate change is caused by man-made emissions of carbon dioxide and other greenhouse gases, which wind turbines do not emit.

Ken Kunze, a director from York, said climate change does not factor into his thinking.

Flooding “is just something that happens,” he said. “I don’t think there’s anything unusual about it.”

Jerry Chlopek, from Columbus, also sees the flood as nothing more than a freak occurrence.

“I don’t think it has anything to do with climate change. It was just a perfect storm. You had your ice from the cold winter from the river, frozen ground, and a fast thaw. The water had no place to go.”

Director Ed Schrock from Elm Creek said he’s not sure what to make of the flood.

He is sure, however, that the utility he helps to run “should take little steps, not big ones. If you’re taking big steps, tell me how you replace 1,350 megawatts of power.” The utility’s largest coal-fired plant has a capacity of 1,365 MW.

“How do you replace that on a hot summer day when the wind is not blowing?”

That is a critical question, according to Mary Harding, a director from Plattsmouth. Among the eight directors interviewed, she’s the only one who sees the flood as a compelling reason to act more decisively now.

“For me, it gives us greater urgency and maybe a platform to discuss why climate change is so important for the people of Nebraska,” she said. “Now we can talk about, ‘It’s your income, your livelihood, your lifestyle, your children’s future.’

“For me, it’s obvious evidence that we have more extreme and more frequent extreme weather events that we need to take into account as we decide what we are doing in the future with generation. Nobody’s going to care if we save half a cent on a kilowatt-hour if the weather makes living here a challenge, if it makes raising crops and livestock here a challenge. That’s what I’m hoping people are seeing out of this.”

And yet, she said, straight talk about the changing climate is considered bad sportsmanship in her home state.

“I feel like in the culture of rural communities in Nebraska, there’s a very strong value of being loyal to your community, to your team. And climate change has become one of those things where if you say, ‘This might be climate change,’ you are no longer being loyal to the scripture of your community, the prevailing belief system. It’s a betrayal of your people and your culture.”

However, she added, “I sense more and more people going, ‘There’s something going on here that is not normal.’”

The utility’s board is considering a small step toward possibly increased use of renewable generation.

“We have tentatively given a head nod to a study of what are the economic and reliability implications of reducing our carbon footprint,” Harding said. “That draft is going out to wholesale and retail customer managers in the next couple weeks.” She said the study would be framed “in terms of risk mitigation for NPPD.”

Harding said the board likely will vote in May on whether to pursue the study. She hopes her colleagues will proceed, and that the study will be completed by the end of 2019. She is not optimistic, but she believes the utility must rethink its business.

“We have a broader charge to look at the economic well-being of our community,” she said. “When we face the utter devastation of this last big event, the millions and millions of dollars of income and capital that are gone for people who were already struggling a little to make ends meet, I think people are beginning to wonder if it’s responsible to just say, ‘No, it couldn’t be climate change and we need to keep doing what we’re doing.’”