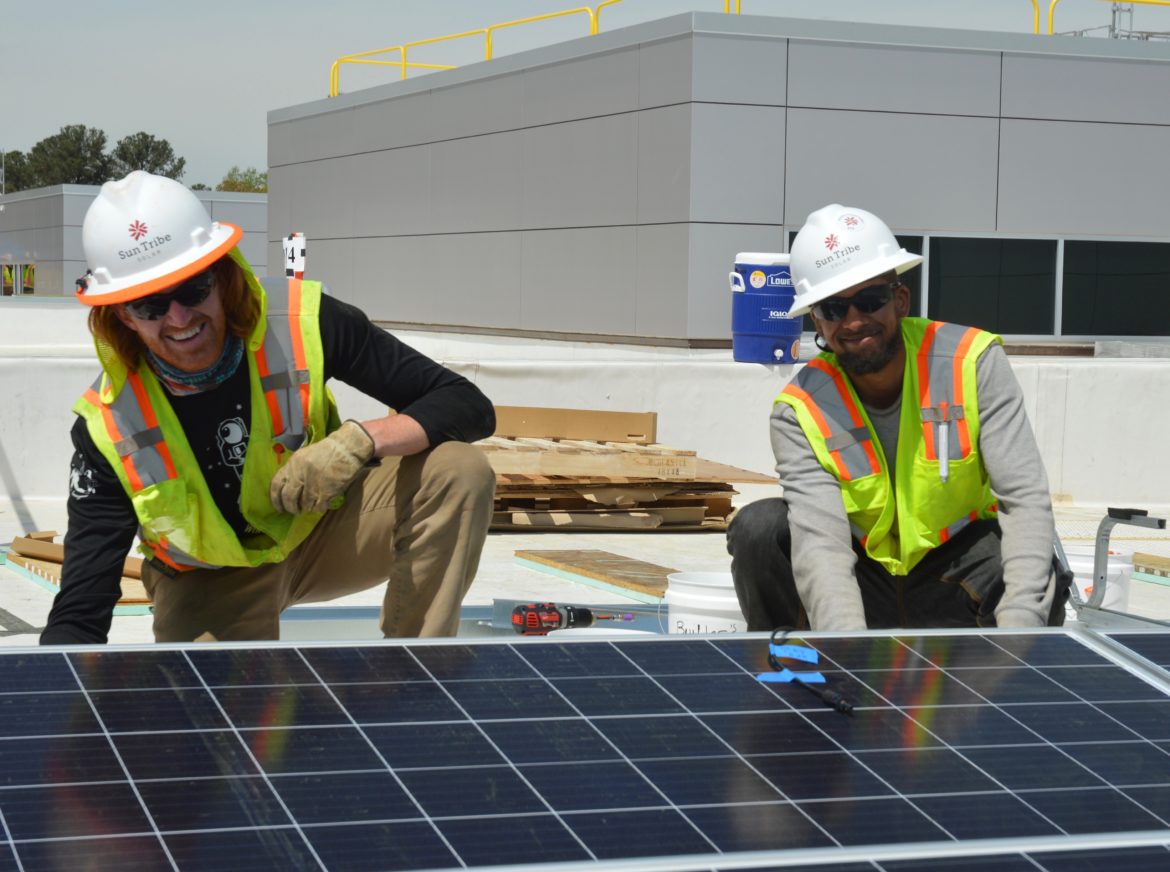 CHARLOTTESVILLE, Va. — To the passerby, the flights of temporary metal stairs leading to the solar array being installed atop Richmond’s Huguenot High School look like part of a typical construction zone.

But when a lanky Adrian Walton sets his booted feet on those steps, they become something more — a ladder that a young black man is being welcomed to climb to a career in an industry that is in the midst of figuring out how to diversify its workforce.

Walton, 31, is one of the newest hires at Sun Tribe Solar, which has grown from three to 63 employees since it set up shop in a Charlottesville warehouse in 2016.

Part of the reason he’s on board as an entry-level installer is because the trio of Virginia Tech graduates who launched the solar startup have dared to hew toward unconventional hiring practices. Rich Allevi, Devin Welch and Taylor Brown have branched out by seeking talent in their own backyard.

This year, three women and nine people of color have joined Sun Tribe. Two women on staff — the senior project engineer and a senior installer — have positions typically dominated by men.

Sun Tribe snapped up Walton barely a week after he graduated in mid-March from an intensive training program called GO Solar. It’s part of a broader public-private innovation in Charlottesville aimed at connecting residents with jobs.

GO Solar was specifically geared to invite underemployed, curious, eager residents to join an insular field that can seem out of reach to minorities.

Allevi, Welch and Brown, all white men in their 30s, know a majority of the industry looks like them. They chose “tribe” as their venture’s centerpiece to reflect their commitment to inclusivity as they expand Virginia’s solar community.

“In our minds, a diverse team is a strong team,” said Allevi, vice president of utility construction. “It seemed so obvious to reach out locally to build our cultural and socioeconomic diversity.”

Likewise, part of their pledge to be a pillar in the community came to fruition in the last year with an office move to coworking space in a refurbished bank, a historic stone building in the heart of downtown.

On a sunny day in mid-April, Walton labored with a team of other Sun Tribe rookies doing prep work for crews setting up and wiring thousands of panels on 150,000 square feet of the stark white Huguenot High School roof in Richmond.

Walton, who is happiest when he is outside, is well aware that not all aspects of solar are sexy and shiny. Still, he approaches what some would call grunt work with a detectable joy as he explains his journey to the rooftop.

“It’s a whole 360-degree turnaround for me,” he said about emerging from five intense weeks of GO Solar. “It’s an awesome program to help people who want to help themselves.”

He credits his longtime girlfriend, who works at the University of Virginia, for helping him emerge from a rough employment patch. She emailed him a notice about the program, figuring his construction background would be a plus.

Feeling stuck at a longtime job as an overnight supervisor at a major hardware chain, the Charlottesville resident and 2006 graduate of nearby Buckingham County High School was lured by the promise of higher wages at a commercial lawn aerating outfit. But he had second thoughts when that new job entailed long, unpredictable hours and no health benefits.

“I took the leap from a dead-end job to the unknown of GO Solar because I figured, why not?”

He was among the eight trainees selected from a pool of 30 applicants.

The seven who graduated mastered classes in basic solar designed with input from Sun Tribe. They also earned certifications in first aid and CPR and for operating forklifts and aerial lifts.

“I guess I knew it was out there, but I didn’t hear people talking about it,” he said. “Those classes made me look at it way differently.”

When he’s out and about with his family, he brags about Sun Tribe projects to his son, 9, and daughter, 2, offering them lessons in the benefits of clean energy.

Walton is especially pleased to have access to health benefits and a retirement plan, and to be in a work environment “where everybody cares about everybody else.”

Moving Virginia to the solar vanguard

Sun Tribe designs arrays for two solar audiences — giant utility-scale projects where it partners with companies, and commercial and industrial projects, where the company deploys its own installation crews. It doesn’t handle residential solar.

Supervisors are keen on promoting from within so nobody stagnates at one job. And, whether employees are designing a solar system or installing one, the mantra is teamwork.

“We put a lot of stress on being well rounded,” said Welch, chief strategy and development officer. “Everybody understands the ‘why’ behind what we do.”

Sun Tribe’s portfolio is 300-plus megawatts, but kilowatts are not the sole measure of success. Equally vital, Allevi said, is paying employees enough so they can raise families and live comfortably in Charlottesville, a college city in the shadow of the Blue Ridge Mountains. Roughly 70% of the 49,000 residents are white.

“I’ve never seen a reason that there should be a difference between what somebody on the roof and somebody in the office is offered,” he said about pay and benefits.

The business partners chose Virginia because of the lure of their college days in Blacksburg — 150 miles southwest of Charlottesville — and the growth potential for renewable energy.

“We figured if we could set roots here,” Allevi said, “we could serve the Virginia market in the right way.”

Allevi and Brown, both engineers, had compiled impressive solar resumes since graduating. Welch, the sole Virginia native among the three, graduated in 2005 with a business degree.

“We wanted to do the hard thing, not the easy thing,” Welch said about choosing a state where solar policy has lagged behind. “We’re not trying to catch up, we’re trying to move Virginia to the vanguard.”

Initiatives such as GO Solar are crucial to filling the employment pipeline as the industry expands, Allevi said. That motivated Sun Tribe to partner with the city to draw up the course curriculum and screen applicants.

GO is short for Growing Opportunities, an initiative spawned by city government five years ago to move beyond the tired, traditional job training model that basically sent people to local community colleges and hoped they eventually found work.

Charlottesville realized it needed to invest in residents in job limbo by inventing its own training program.

The central idea behind GO is pairing with local businesses to fill employment gaps in specific professions. For instance, GO Cook, GO Drive and GO Electric are among the dozen or so other sessions offered thus far.

“GO Solar was the first one in the renewable sector and really one of the best,” said Chris Engel, director of Charlottesville’s Office of Economic Development. “We don’t guarantee participants a job, but we prepare them to be competitive.”

In addition to hands-on training, Walton and his fellow graduates learned how to write a resume, conduct a job interview and navigate transportation options.

The training is free because most of the $1,500 to $2,000 cost per participant is covered by the city. The state funds a small portion.

Sun Tribe hired five of the GO Solar graduates, all men. Three are black, one an Afghan national and the other, white.

What resonated with Walton during the five weeks was having access to the job center in the downtown library, the equivalent of a personal coach, and the tools, steel-toed boots and clothing he would need on the job.

He never felt alone, he said, because somebody was always available for guidance.

“I can’t even put it into words how great this opportunity was for me,” Walton said.

Then, he did just that.

“I’m enjoying every second of this journey. I feel like I’m doing something that actually means something.”