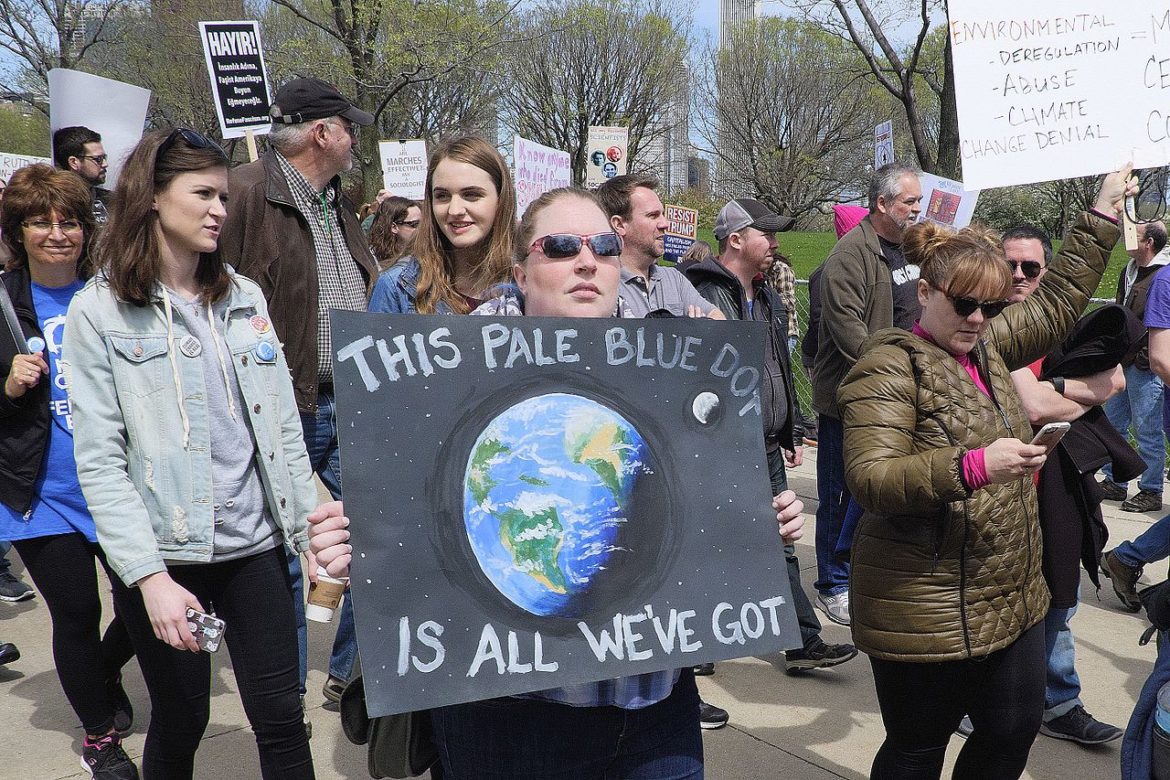 Activists gather for the March for Science in Chicago on Earth Day 2017.

The legislation now before the Senate would significantly increase penalties for trespassing at “critical infrastructure.”

Critics say a bill before the Illinois Legislature that would significantly increase criminal penalties for trespassing on the property of “critical infrastructure” could seriously chill protest about climate change and fossil fuels.

The bill in Illinois is among a number of similar measures recently passed or being proposed in state legislatures nationwide. The American Legislative Exchange Council, a conservative legislative advocacy group, is promoting model legislation regarding trespassing around oil and gas and other energy infrastructure.

The bill (HB1633) passed the Illinois House on April 11 and is now before the state Senate. The legislative session closes at the end of May. The registry of witness slips filed notes from 147 parties supporting the bill and 3,432 opposing it.

“People need to recognize this is truly a squashing of civil liberties,” said Kim Wasserman, executive director of the Little Village Environmental Justice Organization in Chicago, a leader in movements against pollution locally and for climate justice nationally. She said the bill is especially disturbing for residents of communities like Little Village, who feel more vulnerable to criminalization if they are low-income, people of color or undocumented immigrants.

“It’s already difficult to be low-income, women of color, dealing with [lack of] documentation, with language [barriers],” while engaging in protests, she said. “Then you are dealing potentially with not only police but sheriffs, the FBI. The amount of scrutiny, the ability to [mess] with people is that much greater. It will be disastrous for communities.”

The bill would make trespassing on the site of critical infrastructure into a felony punishable by a fine of at least $1,000 and imprisonment. Currently, trespassing is a misdemeanor. Under the bill, anyone who “knowingly damages, destroys, vandalizes, defaces, or tampers with equipment in a critical infrastructure facility” could face a felony charge with imprisonment and a fine of  $100,000. Currently, there are different levels of charging for property damage, with under $500 of damage considered a misdemeanor.

And perhaps most disturbingly to activists, trespassing with the intent to tamper with equipment or “impede or inhibit operations of the facility” would be a felony punishable by imprisonment and a fine of at least $10,000. The bill also says a person or organization may be liable for conspiracy to commit criminal damage for planning such actions.

“This bill makes no differentiation of what level of property damage constitutes a felony — in theory, somebody could break a zip tie and since there’s no threshold at all they could call that a felony,” said J.C. Kibbey, Illinois clean energy advocate for the Natural Resources Defense Council. He added that if someone was charged with planning to cause damage after breaking a zip tie to enter a property, they could seemingly face as much as 13 years in prison under the bill, for three different felonies: trespassing, intent to cause damage and causing damage.

“The things it purports to address, we already have laws for,” Kibbey said. “This was basically to create a special set of laws just for fossil fuel facilities — those are about half the things on this quote-unquote ‘critical infrastructure’ list. At a time when we’re already trying to remedy some of the injustices and discrepancies in our criminal system, to create a separate set of crimes just because of whose property it happens to be on seems to be arbitrary, unnecessary and contrary to the rule of law.”

The bills nationwide have been introduced in the wake of protests against the Dakota Access Pipeline in 2016 and 2017. In Illinois, there have not been major protests around pipelines — though Patoka in downstate Illinois and Northwest Indiana near Chicago are pipeline hubs. Illinois law already contains provisions with increased criminal penalties for trespassing at nuclear plants; the proposed bill expands those penalties to all critical infrastructure. Protests against supports for the state’s nuclear industry in recent years have typically happened in Chicago and the State Capitol, not at nuclear plant sites.

In 2011 activists from Greenpeace climbed up the smokestack of the Fisk power plant in the Pilsen neighborhood of Chicago and painted “Quit Coal” on the stack. Eight faced felony charges. There have also been some protests against Illinois’ coal mining industry in recent years, as mines have expanded and displaced residents in Southern Illinois. In 2014, residents were arrested blocking roads in protest of Peabody’s Rocky Branch strip mine.

The International Center for Not-for-Profit Law lists the Illinois bill in its database of bills and laws nationwide meant to chill protest. It says that states including Minnesota, Kentucky, Missouri, Texas, Ohio, Tennessee and Idaho have similar critical infrastructure bills pending, and states including Indiana, Oklahoma, Louisiana, South Dakota and North Dakota have enacted similar laws.

She said advocates find it disturbing that the Illinois bill has an exception for labor unions engaged in picketing, recruiting or other organizing activities, a provision she said has not been part of other bills nationwide. Illinois has a relatively strong labor movement, and employees at power plants and building energy infrastructure are typically union members.

“What’s going on here is the interests pushing this bill are trying to divide the environmentalists from labor, setting up this false dichotomy between these two social justice movements that should be very aligned,” she said. “Getting off carbon, creating a carbon neutral economy — that’s in everyone’s interests. It’s a divide and conquer strategy to prevent solidarity.”

The witnesses registering to support the bill include several representatives of organized labor, including from the International Brotherhood of Electrical Workers Local 51, which represents power plant workers. Meanwhile, unions including the Service Employees International Union and the Chicago Teachers Union are opposing the bill.

“This is an attack on the First Amendment, on freedom of speech, on the freedom of assembly, this is an unconstitutional bill,” Ellinger-Locke said. “The fact this fight is happening shows [the movement against fossil fuels] has been successful and we will continue to fight.”