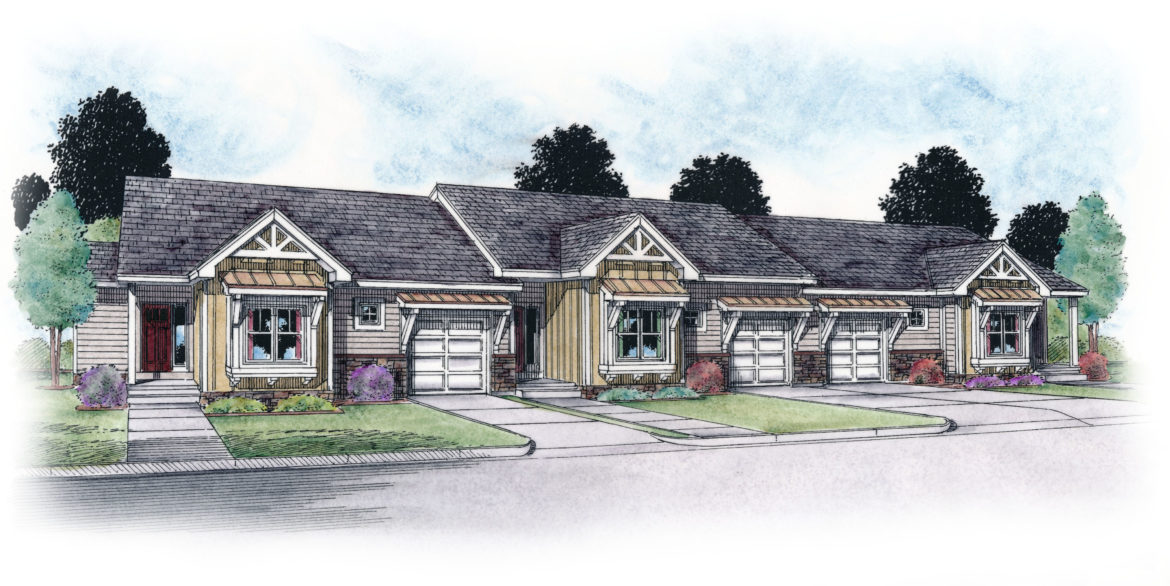 A rendering shows plans for Wynfield Place. The nine condominiums will be built to Net Zero Energy standards in the city of Warwick.

The all-electric, net-zero condominiums are believed to be the first in the state built for middle-class buyers.

The last time Hugh Fisher built an all-electric house was in the 1970s, when he was among a very few homebuilders in Rhode Island experimenting with passive solar design.

“We were practicing building energy-efficient homes, but the science wasn’t perfect then,” said Fisher, the president of H.A. Fisher Homes. “They worked to a certain point, but they weren’t what we thought they were going to be.”

Some 40 years later, Fisher is trying again, this time with the construction of nine condominiums built to Net Zero Energy standards in the city of Warwick. Called Wynfield Place, the development is being built in collaboration with National Grid, Rhode Island’s largest electric and gas utility. It will be the state’s first Net Zero Energy residential community — and one that Fisher hopes will serve as proof that energy-efficient construction can be both affordable and marketable.

“Today, the science problem has been solved — now it’s a math problem,” Fisher said. “But we believe we’ve got that solved too.”

Running the homes solely on electricity is also rare — not just for Rhode Island, but for the Northeast in general. And that poses a challenge if the region hopes to reduce carbon emissions enough to avert the worst impacts of climate change.

But discussions around shifting to zero carbon construction, along with limitations on existing gas infrastructure, have not changed the practices of most homebuilders, said Jeremy Dagold, a project manager for CLEAResult, the consulting firm providing technical assistance and certification for Fisher’s project.

“Natural gas is relatively cheap, and electricity in the Northeast is so expensive that it’s a hard argument to make in terms of dollars,” Dagold said. “Modern heat pumps give oil and propane a run for their money, but not gas at this time.”

For the net-zero condo project, gas heating didn’t make sense because the energy loads for each 1,300-square-foot unit are so low, “you would be really hard pressed to find gas equipment small enough to heat them,” Dagold said. The kitchens will have electric cooktops and convection ovens.

The decision to forego fossil fuels also aligns with National Grid’s strategic electrification plan, which calls for ramping up renewables and speeding retrofits in oil-heated structures throughout the utility’s service territories. National Grid offers its customers incentives to switch from oil to electric-powered air source heat pumps. Such incentives are not available for gas customers to make that switch because “it’s not currently cost-effective,” said Christopher Porter, the utility’s director of customer energy management.

H.A. Fisher Homes, one of only a handful of production builders in Rhode Island, has spent at least five years learning more energy efficient construction methods through a Residential New Construction Program operated by National Grid. High-performance home construction in Rhode Island has otherwise largely been limited to the occasional custom home built for a specific client without strict budget constraints.

“What makes this project so interesting is the homes are being built speculatively,” Dagold said. “They don’t have a customer lined up making these choices. So they have to build to a budget.”

John Marcantonio, the executive director of the Rhode Island Builders Association, says he believes that Fisher is the first builder in the state to try to build a high-performance home for a middle-class buyer. It’s a very price-conscious category, and one in which buyers are more likely to want to put their money toward a luxurious kitchen rather than thicker wall insulation, he said.

“If Hugh can pull off what he’s trying to pull off, then he’ll be setting the stage for other developers,” Marcantonio said. “If there’s good feedback on the project, there will be a lot of copycats.”

Fisher said he’s aiming for a price range of $330,000 to $350,000 for the two-bedroom condos. That price reflects an estimated 5% to 7% premium over standard costs for the high-efficiency materials. By way of comparison, the median sale price for all homes in Warwick for the first quarter of 2019 was $227,000, according to the Rhode Island Association of Realtors.

The single-story condos will be built to be Net-Zero Energy Ready standard, meaning their efficiency level will be high enough that a modest solar system could offset all energy consumption. The three buildings housing the units will be oriented for maximum solar benefit, but Fisher will leave it up to buyers to decide whether to actually install rooftop panels, at their own expense.

Without solar, the estimated annual electric bill for lighting, heating and cooling each unit will be about $800. The first unit should be completed this fall.

CLEAResult worked with Fisher ahead of construction to “cost optimize” on paper which energy efficient materials they would use, Dagold said. Their detailed plan identifies precise values for insulation on the foundation exteriors, under the basement slab, and in the walls and ceilings. Heating and cooling will be provided by Fujitsu cold climate mini-split heat pumps. Water will be heated by air source heat pumps.

“We went back and forth on insulation values, window values,” Dagold said. “There were a couple of areas where we made choices to go for a product that is less inherently efficient, but then made up for it with another product that is more efficient.”

Fisher is also eligible for nearly $50,000 in incentives through National Grid, based on final energy performance testing of the homes, according to a utility spokesman.

Rhode Island state regulators are working with National Grid to support additional zero energy building efforts, having identified it as a critical strategy for moving the state toward future efficiency targets. The state energy plan calls for a 45% reduction in greenhouse gas emissions (below 1990 levels) by 2035. A task force led by National Grid concluded that a more robust zero energy building effort, for both residential and commercial properties, could make a 27% contribution toward that goal.

To help encourage more high-performance construction, the state has created so-called stretch codes, or voluntary green-building guidelines that go beyond minimum energy codes and can act as a pathway for builders, said Nicholas Ucci, deputy commissioner of energy in the Office of Energy Resources. Earlier this year the agency awarded a $500,000 grant to a K-8 charter school in Kingston that has committed to meeting the stretch code as it undertakes a major renovation project.