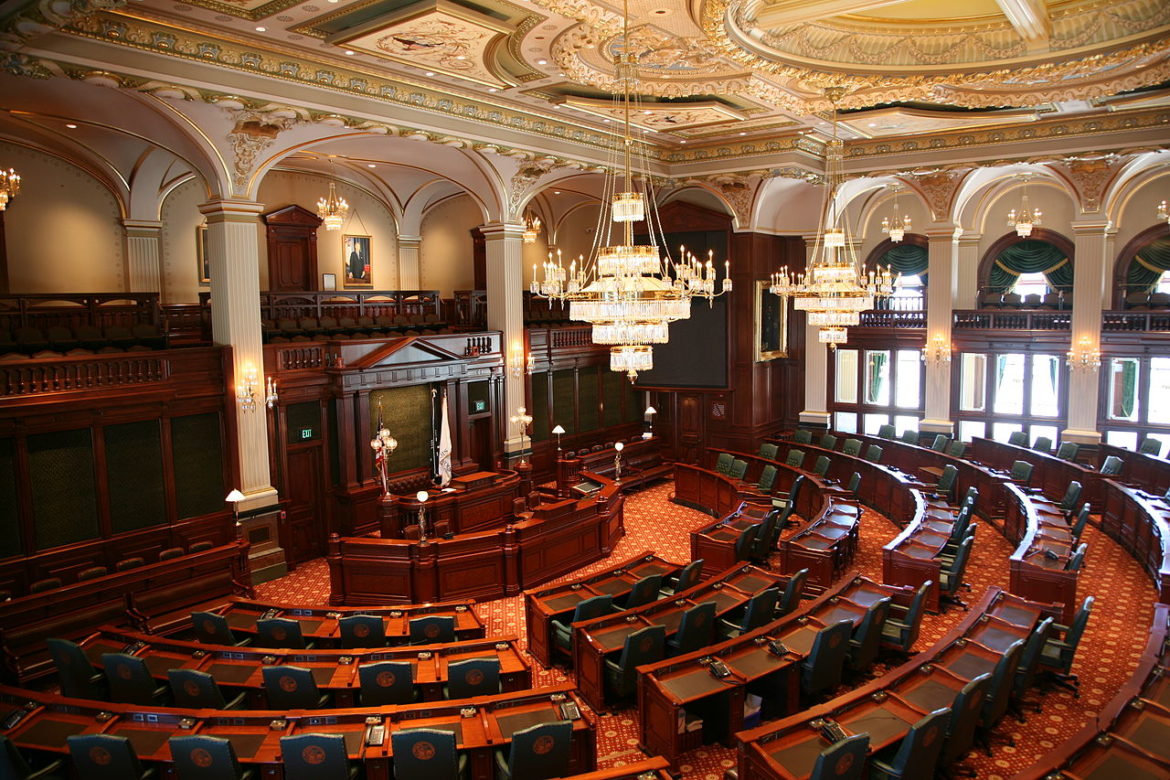 The Illinois House of Representatives chamber at the State Capitol in Springfield.

The Illinois Legislature is considering a bill to require protections on closed ash impoundments, a measure long sought by environmental advocates in the state with the nation’s most coal ash repositories.

On May 9 the Illinois Senate passed the bill, which was quietly if contentiously crafted through discussions among environmental groups, power plant owners and other stakeholders. A House committee passed the bill on May 16, and it now needs to pass a full House vote before the session closes at the end of May.

The bill (SB9) orders the Illinois Environmental Protection Agency to develop rules regarding the closure of coal ash repositories and creates a process for public input on individual closure plans that must be filed with the state. Advocates say the process will provide more safeguards than exist under federal coal ash rules, which order companies to report their plans for closure but don’t have a public input or centralized enforcement mechanism.

The state bill would order companies with coal ash repositories to pay annual fees into a fund that the Illinois EPA would use to carry out the program. It would also mandate that companies put up financial assurances to pay for future closure and maintenance of coal ash impoundments.

“We have public participation, the feds are silent,” said Allen Grosboll, legislative director for the Environmental Law & Policy Center. “We have financial assurance, the feds are silent. This is one of the most important environmental protection laws that the state of Illinois has considered in the last several years. Citizens in these communities have cried out for help for many years, and this legislation is finally a response.”

Andrew Rehn, water resources engineer for the Prairie Rivers Network, has spent years fighting for the removal or cleanup of coal ash repositories at a defunct Dynegy coal plant on the Middle Fork of the Vermilion River, Illinois’ only designated “wild and scenic” river.

“I’m pretty excited that we’ve gotten here,” he said. “Initially we had ‘remove all the coal ash,’ but there was too much pushback to pass something like that. It’s a bill we’ve negotiated pretty extensively; I think it puts us on a great path. It will kick off our rule-making process.”

Read more: In Illinois, the risk of coal ash contamination rises with floodwaters

An earlier version of the bill also would have required that local labor be used and prevailing wages paid for closure work. While the current version does not include such language, labor unions could push for future legislation to reintroduce such mandates.

There are more than 80 coal ash impoundments in Illinois, many of which were found to be contaminating groundwater or surface water in studies last year by the Prairie Rivers Network and other groups.

NRG and Dynegy-Vistra, the owners of power plants and coal ash repositories in Illinois, did not respond to requests for comment.

The bill would demand that companies operating coal ash repositories put up financial assurances in the form of a trust fund, surety bond or irrevocable letter of credit. Self-bonding, a controversial practice often used by coal mines to cover future liabilities, would not be allowed. That practice has been highly controversial, since it can mean companies avoid liability by declaring bankruptcy.

The coal ash bill would also create a state fund specifically to allow the Illinois EPA to devote more resources to developing the coal ash storage rules and carrying them out, “so it’s being paid for by these companies and not by taxpayers,” Grosboll said. He said the agency would need about 10 employees to administer the program.

The fund would be expected to collect about $4.5 million initially and about $1 million a year after that, with the total amount declining over time, stakeholders said. The decline would happen as annual fees are reduced when sites proceed through and complete closure, with the program eventually phasing out.

If the bill becomes law, the Illinois EPA will carry out a process to develop rules governing the storage of coal ash. Then operators will have to file closure plans that comply with the rules, and stakeholders can request public hearings be held on the plans.

Under the federal coal ash rules adopted in 2015 but currently being challenged by the Trump administration, states can adopt their own rules that are as strict or stricter. Advocates say they are hopeful the Illinois rules will be more protective than the federal rules.

The Illinois EPA in years past has been seen as friendly to the coal industry. But advocates predict that Gov. J.B. Pritzker’s administration will be stringent on environmental enforcement.

Rehn said it is particularly important for the state rules to be made soon, since a D.C. federal appeals court’s interpretation of the federal rules means that unlined coal ash impoundments nationwide must be closed by 2020.

“The rule-making process will really be crucial,” Rehn said. “Without it, we’re a train off the track, with all these closure plans coming down and no one to approve them.”

Rehn said the Middle Fork site, arguably the state’s most notorious coal ash location, might not be affected by the state bill since the bill does not apply to sites that are already going through closure and complete it within two years.

The Prairie Rivers Network, the Sierra Club and others have filed lawsuits regarding the Middle Fork, and if litigation delays the closure it may fall under the bill after all. Regardless, Rehn feels that battle has helped raise the profile of coal ash statewide.

“The fact that the Middle Fork issue has finally elevated this to the spotlight has been a big part of why we’re here today,” Rehn said. “There’s a lot of reason to be hopeful.”