Photo By
Bruce Stidham / for the Energy News Network 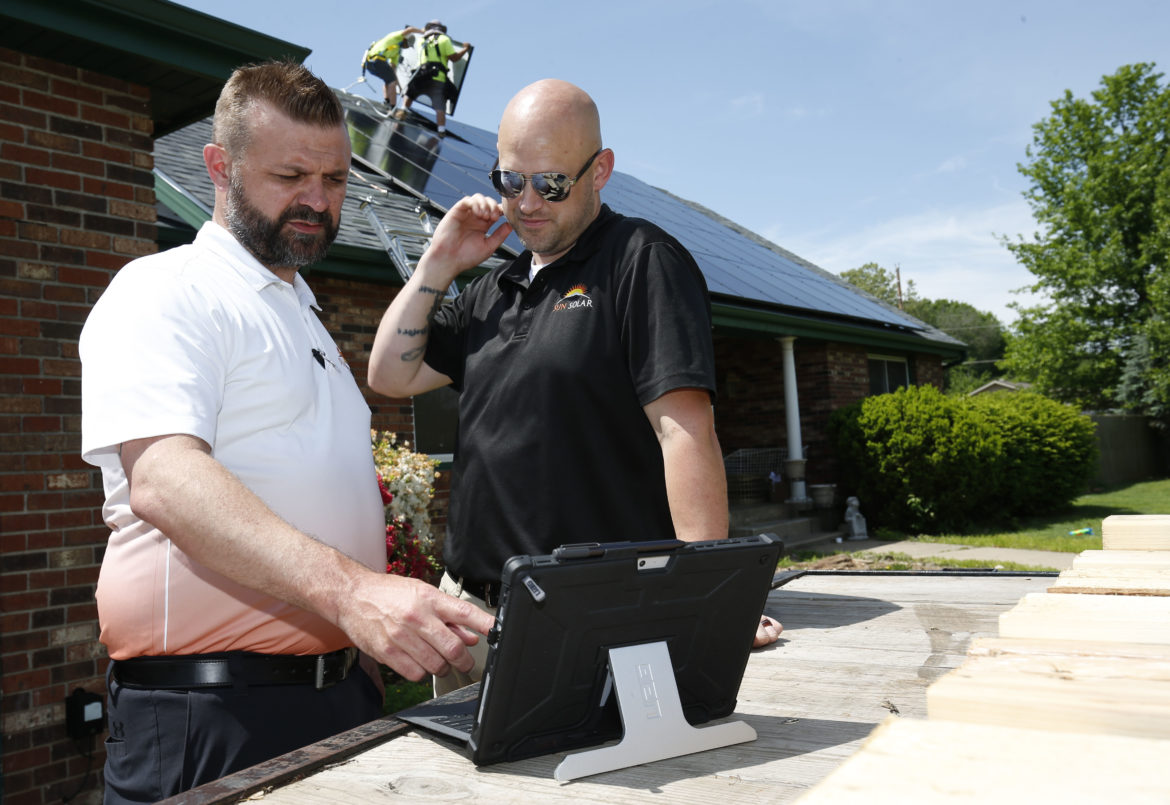 “They want the next mission to accomplish,” he said. “They want to execute it and do it properly. They like to perform at a high level.”

That’s why Arthur, the founder and chief executive officer of Missouri-based Sun Solar, makes it a point to hire them.

Nearly one-fifth of Arthur’s approximately 110 employees are military veterans — more than twice the industry average, according to a national survey of solar companies released this month.

The U.S. Solar Industry Diversity Study primarily focuses on racial and gender diversity, but the report also includes data on hiring of veterans.

“Diversity in its broadest sense includes a wide range of backgrounds and experiences that people bring to the table, including veterans status,” said Solar Foundation spokesman Avery Palmer. “Veterans bring valuable experience and skills to the solar industry, which is why we’ve worked on a variety of initiatives to connect veterans with solar employers.”

In Missouri, Arthur has ambitions to boost his vet hiring even more: to 25% in the next two years.

Having been a sheriff’s deputy before he launched a solar installation business in 2012, Arthur said he understands and appreciates people who have spent time in military culture.

“The first couple vets I hired, I had good luck with them performing at the level I needed. We started looking for people with military experience.”

He encountered a sense of community among military veterans that helped him in his recruitment efforts.

“When they like how they’re being treated,” Arthur said, “they recruit the friends they served with.”

Derek Baker, 35, is one veteran who found his way to Arthur’s company. At 19,  he joined the Marine Corps Reserve and for a decade alternated between training for warfare and working for something short of a living wage in Missouri. He also went to Iraq for two one-year tours.

He returned from the first deployment and took a job at WalMart, where he says he earned $6.20 an hour.

“Ramen noodles and a can of Spam … that’s how I survived a lot of the time after that first tour,” he said. “It was really tough.”

Money was one reason he accepted the Marines’ invitation to return to Iraq. The steady drum of explosions caused injuries to his back and his brain, Baker said, and he was granted a medical discharge in 2011.

“I just couldn’t do it anymore. My body was in such pain. I wasn’t able to perform the job. I was ready to start a new chapter in my life.”

He landed at a Mexican fast-food restaurant, where he learned to cook and earned between $7 and $8 an hour. He went to school briefly, started an exercise business that dissolved after a couple of years and began tinkering with making a solar panel. He found the technology fascinating.

Baker was cruising Facebook one day when he noticed Sun Solar.

“They had 20,000 likes on their page. I thought, ‘That seems like big deal. It’s obviously not some rinky-dink store.’”

He kept tabs on the page for a few weeks before sending them a message. He got a response right away and was hired a week later for $15 an hour — finally enough to support him in Springfield.

“In a short amount of time, I’ve been stepped up a couple times. I’m trying to make myself useful. I’ve been able to grow with the company,” Baker said. “It’s been incredible.”

His first job was to help installation crews, but within six weeks he was leading crews. Later he got off the rooftops and into an office job helping to run projects and resolve problems.

“If there’s a problem, I love figuring that out,” he said. “There’s always problems to be solved.”

Arthur believes military veterans seeking work have been disadvantaged by widely-held suspicions that they are troubled by post-traumatic stress disorder or other mental health issues.

“Businesses have tended to be afraid of hiring military veterans,” he said.

Another factor mitigating against hiring veterans, in Missouri, at least, was confusion about whether state law prohibited seeking out military veterans to hire. The law was changed in 2018 and now allows employers to seek out people who’ve been in the service.

Arthur’s efforts have paid off. He asks counselors at career centers to let veterans know he’s interested in them. Arthur also makes a point to speak publicly, when given the chance, about his interest in veterans. He addressed a conference a year ago about his success in hiring veterans. He said he was looking for more.

“That hit the news and people talked about it. We post about it on social media and engage with regular media.”

Having worked alongside a number of veterans while a sheriff’s deputy, Arthur said he feels a sense of mission towards them.

“It’s good to give those guys work and satisfaction so they can feel they are making a difference in the world when they come back.”