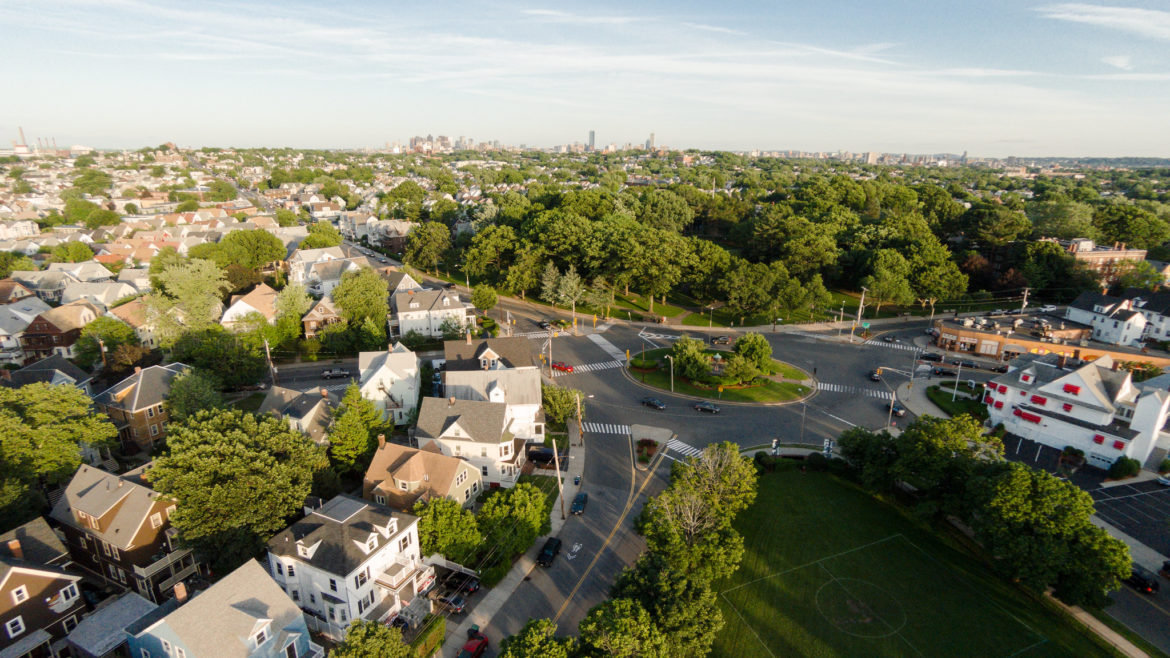 The Boston skyline rises in the distance over Somerville, Massachusetts.

Some builders question whether the standard is the best one for reducing emissions from the state’s buildings.

Activists and lawmakers are pushing for an updated building code in Massachusetts that would require new buildings in most cities and towns to generate as much energy as they use.

The standard, often known as “net-zero,” would be implemented as part of the state’s stretch energy code, a more ambitious version of the statewide building code that individual cities and towns can choose to adopt.

“In order to reach our climate goals and to really tackle climate change, we have to start by really committing to net-zero for new construction in the near future,” said Rebecca Winterich-Knox, an organizer with the Massachusetts Climate Action Network.

Some builders, though, even those who support using building codes to cut emissions, cautioned that net-zero is not the best approach. They advised looking at other standards that focus on efficiency and building materials.

The Massachusetts Climate Action Network rallied an estimated 40 supporters to speak in favor of a net-zero code at a recent meeting of the Board of Building Regulations and Standards and is asking organizations to sign on to a letter asking the board to adopt the new rules.

State legislators Rep. Tami Gouveia and Sen. Joanne Comerford have also filed a bill that would direct the board to create a net-zero stretch code. The legislation leaves most of the details to the board, but it does call for a code that would result in “highly energy efficient buildings” and specifies that buildings’ energy needs can be met through a mix of offsite and onsite renewable energy generation. The new code would have to be fully implemented by 2030.

“I would love to see it happen even sooner, of course,” Gouveia said. “We need to be going in with a sense of urgency, but give municipalities a chance to ramp up.”

Massachusetts adopted its first stretch energy code in 2009 with the goal of giving cities and towns the choice of choosing tighter energy requirements. Today, 262 of the state’s 351 municipalities have opted into the stretch code.

Now, however, municipalities interested in going even further to reduce emissions are finding that state law prevents them from adopting stricter regulations than those in the stretch code. Individual builders can adhere to higher standards if they choose, but individual cities and towns can’t require these practices.

The city of Somerville, for example, has declared plans to go carbon-neutral by 2050. But achieving that goal seems unlikely if the city can’t require new buildings to be net-zero, said city resident and community activist Larry Yu.

The problem is made more pressing by Somerville’s high population density, Yu said. There is limited undeveloped space in the city, and those spots are sure to be developed soon, he said. If a net-zero stretch code is not put in place soon, this development will happen under current standards, and the city will have lost a chance to secure important pollution reductions.

And the same principle is true statewide, he noted. Massachusetts has the third highest population density of any state in the country.

“Once those buildings get built, our building sector emissions are locked in,” Yu said.

Advocates’ efforts to convince the building standard board to change the stretch code have been met with some resistance thus far, Winterich-Knox said. At the recent meeting, several board members seemed to challenge the idea that is was the board’s responsibility to take on issues beyond building safety and inspections.

“They just don’t see their role as being efficiency and climate,” Winterich-Knox said. “It was incredibly unwelcoming.”

The board declined to issue comment on the record, but noted that it respects all public comment and will review any specific proposals for new code language.

At the same time, there are also those in the construction industry who support efforts to reduce carbon emissions through the building code but argue net-zero could be focusing well-intentioned efforts in the wrong direction.

For a new building to be considered net-zero, it would need to generate renewable energy equal to its overall electricity consumption. But that requirement alone will not necessarily cut down the amount of energy a building uses, said Paul Eldrenkamp, president of Byggmeister Design & Build, a sustainability-focused remodeling firm based in Newton, Massachusetts.

“One of the unintended consequences of net-zero would be that you could build worse buildings and put more [solar] on them,” he said. “I am not a big fan of zero net energy as a building standard.”

He would prefer a code that reduces buildings’ energy consumption, regardless of where their power comes from. As a potential model, he points to the Passive House standard, a voluntary set of requirements that aims to reduce a building’s energy usage by 90% compared to the same construction under a conventional building code.

To achieving long-term carbon reductions, Eldrenkamp argued, it is also essential to look at the materials that go into construction. Choosing wood fiber insulation over fiberglass, for example, can reduce the carbon impact of initial construction, he said.

The definition of “net-zero” usually includes the energy generated by a building and the energy it consumes through ongoing operations, but does not factor in the carbon footprint of the materials used in construction.

“If we’re investing a huge amount of carbon upfront in buildings that are going to have low operating carbon, we’re better off not building at all,” Eldrenkamp said.

Others contend the net-zero standard puts too much attention on individual buildings at the expense of more systemic approaches. It might, for example, be far more cost-effective for a given area to build new houses to a highly energy-efficient standard and build a utility-scale solar installation nearby, rather than requiring renewable energy generation on each new building, said Chris Schaffner, principal at Green Engineer, a sustainable design consulting firm based in Concord, Massachusetts.

“Net-zero is often seen as the only way to get energy down to zero,” said Schaffner, who emphasized that he strongly supports building codes that will reduce energy use. “But we can expand our horizons and think more about community and neighborhood and region.”

From here, advocates for the net-zero stretch code plan to continue their two-pronged push: asking the Board of Building Regulations and Standards to ask while also lobbying legislators to support Gouveia and Comerford’s bill.

“We’re calling on the BBRS to pick up the gauntlet and promulgate these regulations, rather than waiting for the Legislature to come in with blunt force,” Gouveia said.