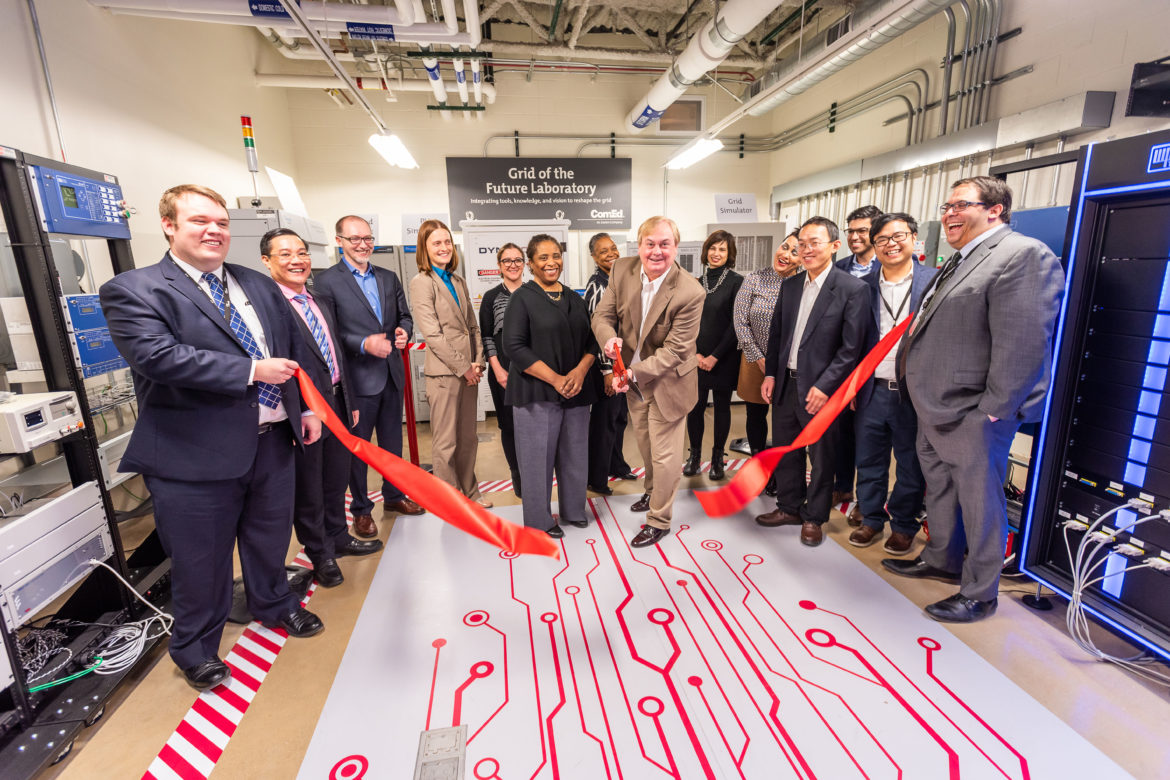 ComEd President and Chief Operating Officer Terry Donnelly cuts the ribbon at the Grid of the Future Lab, where ComEd tests microgrid components, in November 2018

Unlike the first phase, ComEd isn’t legally obligated to use renewables, but the company says it will seriously consider them as it reviews proposals.

Stakeholders including clean energy and community groups are watching closely as ComEd begins the second phase of a microgrid pilot project in Chicago.

The Illinois utility is seeking proposals from developers for 7 megawatts of generation capacity to expand its Bronzeville community microgrid.

The expansion will nearly triple the test project’s grid load. The first phase served about 1,000 residences, businesses and institutions, according to ComEd. Just under 400 more will be added in the second phase, according to the utility.

Unlike the project’s first phase, ComEd is not legally obligated to use renewables, but it faces expectations from clean energy groups to make that a priority. Meanwhile, ratepayer and community groups said they want to see the project continue to develop in a way that benefits more than just the utility.

“We’re pleased with the result on phase one,” said Brad Klein, a senior attorney at the Environmental Law & Policy Center. “We’ll see how that translates into the next phase and if ComEd remains committed to problem-solving … to get to as much clean energy as reasonably possible.”

The Illinois utilityreceived regulatory approval for the project in early 2018 after a contentious review process during which several groups raised questions about the $25 million cost for ratepayers and the energy sources originally proposed.

The first phase — funded in part by $5.2 million from the U.S. Department of Energy and intended to test a microgrid controller, solar power and batteries — wasn’t contested. But the second phase, for which the utility originally proposed fossil fuel generation, received pushback from environmental groups.

When the Illinois Commerce Commission approved the project, it did so with two key stipulations. First, ComEd should seek substantial renewable generation for the microgrid. Second, ComEd must provide a way for third parties who develop microgrids to integrate them with the wider grid so they can “island” in case of an outage.

The utility successfully tested the first phase in April, simulating an islanding situation in which the microgrid operates independently of the grid. The 2.5 megawatts of load in that phase included 484 kilowatts of solar panels on the Dearborn Homes public housing complex and a 500-kilowatt battery, as well as portable generation used for the test.

Clean energy advocates say the second phase could be a valuable opportunity to test not only the potential for microgrids in Illinois, but also for renewable generation on the grid more broadly — but that depends on ComEd’s next steps.

“We haven’t limited it to generation type, but left it open for developers to propose solutions,” said Aleksi Paaso, ComEd’s director of distribution planning, smart grid and innovation. Environmental attributes will “certainly be part of the evaluation,” he said, adding that the utility is “taking that very seriously.”

Paaso said the request for proposals presents the challenge of selecting appropriate generation sources while staying in the technical boundaries of the project. The bidding process is unique, he said, since microgrid owners usually own generation. ComEd originally wanted to own generation on its microgrid but agreed to buy or lease when that idea received pushback.

The Department of Energy funding for the first phase mandated solar and storage and specific deadlines. The second phase won’t have the same constraints for generation type or timeline. ComEd plans to complete construction in the first half of 2020, and the pilot as a whole lasts for 10 years.

“My hope is that ComEd will use the time available to not rush into an easy but less innovative approach using gas, and instead will — if they have found barriers — take the time necessary to overcome them,” Klein said.

The second phase will be especially important, said David Kolata, executive director of Citizens Utility Board of Illinois, “because that’s when we get into: can we cost-effectively do it with renewables and storage?”

The next phase should ideally have “as much renewable power as possible,” as well as storage, Kolata said, but the utility will also have to consider the cost of those resources. With renewable costs dropping, he hopes to see bids for renewables that are competitive with fossil generation.

Once complete, ComEd’s microgrid will include residential and business customers, and several public facilities including a police headquarters, health clinics and a library. It will also connect to the nearby Illinois Institute of Technology microgrid to form a “cluster” that can operate together.

The potential and the need for microgrids in Illinois are still up in the air. Paaso said they’re important in case of extreme weather events and potential cyber attacks that result in grid outages.

The steep cost of the ComEd project means that future projects will likely be different. Kolata said that while utility ownership may work in some cases, third-party ownership will be important to build more microgrids in the state.

“The key thing is the islanding,” he said. “That’s the special service that only the utility can do.” By allowing third parties to own microgrids and use the utility’s existing wires to connect or disconnect from the grid, microgrids could serve more than just one customer or facility. It would involve a special tariff paid by the microgrid owner to enable islanding.

The commission’s final order directed ComEd to develop a pilot tariff by the beginning of 2020. Clarifying the procedures for that capability is important to bring microgrids to scale in the state, Kolata said.

Microgrids are probably most useful for critical facilities like hospitals, airports, and heating and cooling centers, he said. They offer resilience in case of outages, as well as potentially cleaner and cheaper generation than current backup generators. They may not take off much beyond those critical locations, but it’s possible there will be more use for them down the line.

The Bronzeville pilot can provide valuable information for the utility, policymakers and researchers — “anyone looking to develop a microgrid or scale up renewables,” said Christie Hicks, a senior attorney at the Environmental Defense Fund. As the grid evolves, lessons from this project “could be applied both to other discrete microgrid projects but also to the system as a whole.”

“Overall, I would give ComEd high marks,” said Paula Robinson, president of the Bronzeville Community Development Partnership. She’s part of a community advisory board to offer input to the utility on the microgrid and other projects that are part of ComEd’s Bronzeville Community of the Future initiative.

She appreciates that the utility is open to community input, but she hopes to partner more directly with ComEd in the future. When the utility considers developer proposals, for example, she’d like to be more active in that process.

Going into the second phase, “ComEd is committed to continue” stakeholder workshops, Klein said. “Being able to participate and problem-solve with ComEd and other stakeholders is exciting,” he said, “and that’s the kind of thing I hope we see through phase two.”