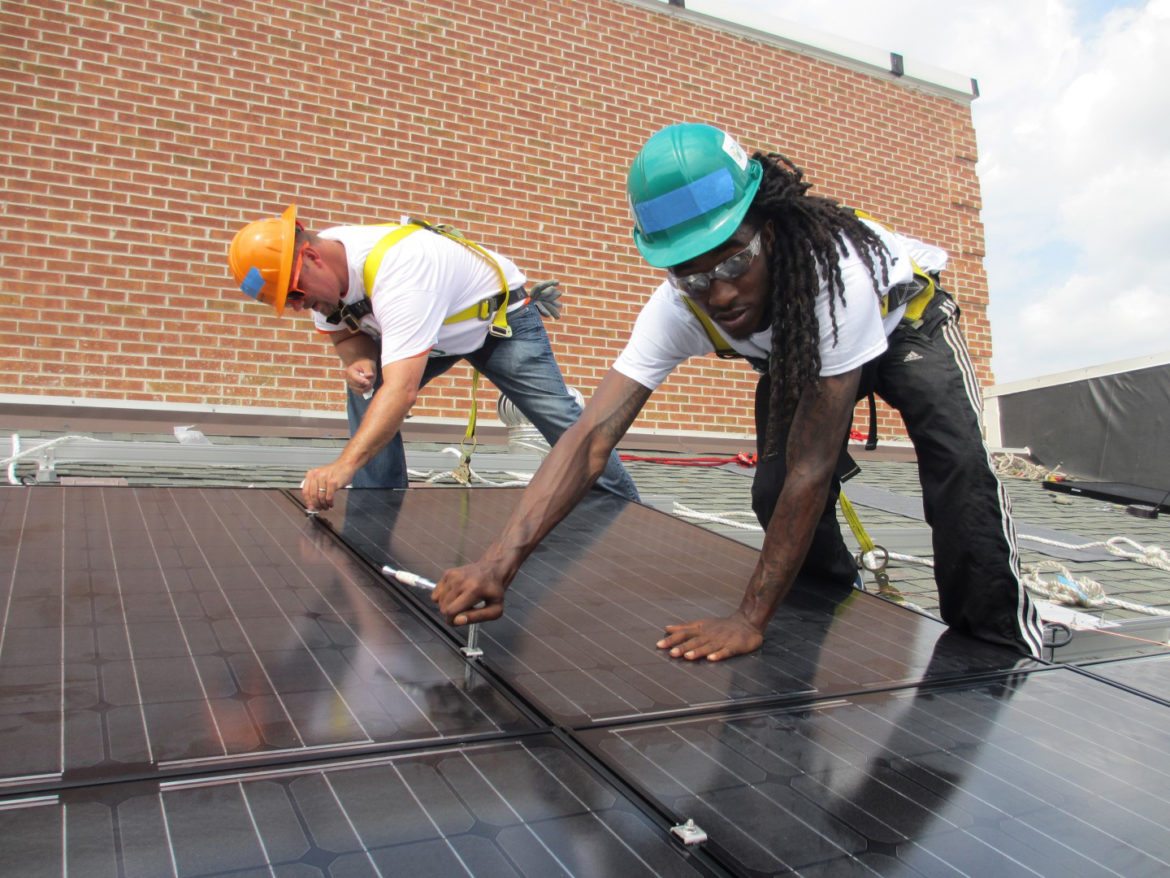 Applications are now open for Illinois’ Solar for All program meant to spur projects for underserved residents.

Correction: A previous version of this story said that renewable energy credits under the Illinois Solar for All program are paid out before installation; in fact the payment is made when the installation goes online. The criteria for low-income participants has also been clarified.

Now, Lutton is hoping for even more growth with the rollout of one of the law’s marquee programs aimed at making solar accessible to more people.

Illinois Solar for All is designed to serve people traditionally left out of the solar market: low-income households, including rural homeowners and renters in urban apartment buildings; people of color; and residents of environmental justice communities most impacted by pollution from fossil fuels.

The program provides renewable energy credits paid for the creation of residential and community solar for underserved residents, as well as for nonprofit organizations and public agencies that are located in marginalized areas or provide a critical societal function.

On May 15, the Illinois Solar for All application period opened for projects seeking to participate.

“When [the Future Energy Jobs Act] passed we knew that the market here was going to explode so we decided to put our money where our mouth was and actually build a business here in our own community,” said Lutton, who had worked for years as a clean energy consultant in the Chicago area before founding Certasun. “We’re really big believers in the mission of [Illinois Solar for All] and really want to support it  and see as many people as possible with solar.”

The renewable energy credit prices that those generating solar receive are much greater under Illinois Solar for All compared to the main Future Energy Jobs Act program that incentivizes solar development.

The ultimate size of the program is based on the funding available. Illinois Solar for All is likely to result in a total of 8 to 12 megawatts of new solar per year, according to Vito Greco, associate director of solar programs for Elevate Energy, the nonprofit organization that runs the program. The Illinois Power Agency, which procures power on behalf of utilities, oversees the distribution of solar incentives created by the Future Energy Jobs Act.

For a project to be funded under Illinois Solar for All, first solar developers need to become approved vendors. Developers then team up with customers who meet Illinois Solar for All criteria including a cap on income, and submit their proposed project. The projects are evaluated based on a point system with points given for criteria including geographic location, and whether women- or minority-owned businesses or employees would be involved.

A quarter of the program’s funds are reserved for projects located in environmental justice communities that disproportionately suffer from pollution.

Evaluation on such criteria should avoid the confusion and dissatisfaction that plagued the distribution of renewable energy credits, or RECs, under the larger adjustable block REC program created by the Future Energy Jobs Act. Under that program, exponentially more projects applied in the community solar category than credits were available, so a lottery was used to decide who could participate. Critics said it wasn’t the best way to make sure the most viable and deserving projects were built.

Greco said there’s a chance “random selection” could be used in the later stages of Illinois Solar for All, “if there are projects that are ranked the same and not enough budget is allocated … to fund both.”

If a project is accepted into Illinois Solar for All, the solar developer will get the REC money once the installation is generating power, and pass on the incentive to their customers either through a reduced cost for the installation or through a third-party ownership agreement wherein the developer owns the solar installation and the customer gets the energy for a monthly fee.

Such third-party arrangements are a common way for customers without sufficient capital to take advantage of solar energy. In this case, customers would pay less each month to the developer-owner than in a typical arrangement. In fact, the Future Energy Jobs Act says that Illinois Solar for All customers can’t pay more than half of what they would have paid a utility for the same amount of power.

Unlike other renewable energy credit programs where the credits pay out over several years, the RECs under Illinois Solar for All are awarded when installation is complete, based on the predicted generation for 15 years.

“That is recognizing the additional steps that developers need to take to market to low-income and environmental justice communities, the additional challenges for reaching those communities,” explained Sam Garcia, Midwest climate and clean energy fellow for the Natural Resources Defense Council. “Prepayment works as a further incentive, and gives developers a pot of money they can use for building the system, offering favorable terms to participants and also the administrative costs of getting participants involved.”

“We’re really working collaboratively, it’s really important we work with environmental justice partners,” said Jeanine Otte, associate director of workforce development for Elevate. “We’re inviting folks to participate in feedback sessions with the Illinois Solar for All rollout, so people can stay engaged, get connected, and be in the right spaces and make sure everyone is included in these spaces.”

Garcia and other participants said they’ve been happy with how it’s progressed so far.

Juliana Pino, LVEJO’s policy director, said the group is especially interested in developing solar jobs in tandem with solar power, and hopes Illinois Solar for All offers “unprecedented opportunities for communities on the frontlines of environmental harms and climate change consequences to lead [a] just transition” to a cleaner economy.

Lutton is in the process of becoming an approved vendor under Illinois Solar for All, and then he plans to seek customers on the South and West sides of Chicago, made up of disproportionately low-income African American and Latinx neighborhoods.

Certasun focuses on third-party ownership agreements with residential customers, meaning the company builds and owns solar installations and customers pay them for the energy or to lease the solar panels.

Illinois Solar for All “is a much better offer” than the renewable energy credits available under the Future Energy Jobs Act’s adjustable block program, which his company also leveraged, Lutton said. “Because of the extremely high REC prices, we’re able to offer a solar lease that’s much better” financially for residents than what would otherwise be available.

Since the Illinois Solar for All rules mandate that monthly fees paid by customers cannot exceed 50% of what they would pay a utility, third-party solar owners shoulder any risk associated with a project.

“So basically you’re telling someone, ‘Would you rather pay $10 or $5?’ That’s why I think it’s going to be a very popular program,” Lutton said. “It’s true solar has been primarily purchased by people that have the means. Illinois Solar for All allows us to bring these benefits to people who purchase electricity like everyone else but haven’t been able to take advantage of solar.”

Illinois Solar for All has a budget of about $30 million a year through 2021, with up to $20 million each year coming from the state’s Renewable Energy Resources Fund — built up in years past from payments by alternative electricity suppliers; and additional funds coming from the renewable portfolio standard fund paid into by utilities.

Illinois Solar for All is required to get either 5% of the total renewable portfolio standard fund or $10 million each year, whichever is greater.

Clean energy advocates are hopeful that Illinois Solar for All will mean a significant expansion of solar for diverse customers in the next few years. But they say to have a lasting impact it needs to be expanded. The proposed Clean Energy Jobs Act calls for quadrupling the size of the program, though it doesn’t specify how it would be funded.

The Clean Energy Jobs Act and another bill that would expand solar incentives in Illinois, Path to 100, are before the Illinois Legislature, which closes its session at the end of the month.

Lutton said he supports both bills and is eager for “anything the Legislature or [the Illinois Power Agency] or administrators can do to make sure that when we make investments we know the program is going to be there” for the long haul.