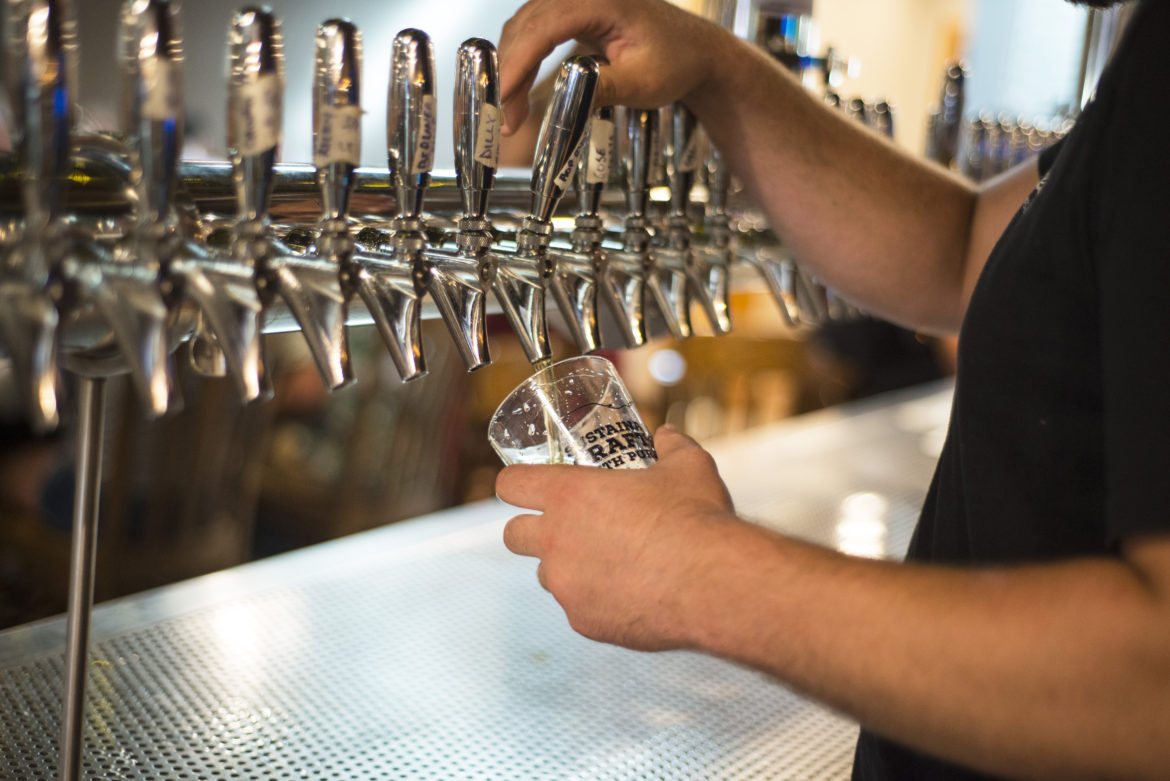 Beer is poured at Jackie O's Pub & Brewery in Athens, Ohio. Solar panels added in 2016 provide roughly 40% to 50% of the electricity needed at the brewery.

Clean energy helps Ohio breweries save money, stand out on crowded cooler shelves, and spread the cause to customers.

A decade before Budweiser’s Clydesdales galloped alongside wind turbines in the beer giant’s 2019 Super Bowl commercial, solar panels were going up on the roof of Great Lakes Brewing Company’s Cleveland brewpub. Since then, the Ohio brewer has continued to invest in clean energy, including adding a 62-panel solar array to its brewery roof in early 2017.

While financing renewable energy and efficiency projects can be challenging, craft brewers in Ohio and beyond are finding the benefits worthwhile, from cost savings to helping their beers stand out on crowded cooler shelves. In the process, they’re also helping to expose curious drinkers to the benefits of clean energy.

“Use of renewable energy — either in the form of on-site generation or through supplier choice programs — often ends up delivering significant cost savings to a brewery,” said Justin Hemminger, deputy director of the Ohio Craft Brewers Association.

Jackie O’s Pub & Brewery in Athens added solar panels when it expanded its brewery in 2016. They provide roughly 40% to 50% of the electricity needed at the brewery. Athens-based Third Sun Solar also installed a 57-panel array at nearby Little Fish Brewing Company early the following year.

To make up the difference between usage and on-site generation, some breweries buy wind or solar energy from the grid through renewable energy credits. Energy efficiency is another big focus for breweries.

“Energy is needed heavily in our manufacturing process” for boiling, chilling, filling cans, filling kegs and so on, said sustainability manager Vincent Valentino at Land-Grant Brewing Company. “As a taproom that is open into the evening, our building consumes energy longer than most factories or restaurant/bars would,” he added.

Land-Grant used profits from the first year’s sale of its summery Sun-Grant beer series to install more energy-efficient lighting. The company is now in the process of sealing its building envelope.

Great Lakes’ owners were “swimming against the tide” when they opened Ohio’s first craft brewery back in 1986, said sustainability manager Saul Kliorys. Sustainability was part of founders Patrick and Daniel Conway’s values. Plus, “there was a need for cost savings,” which fits right in with reducing energy waste, Kliorys said.

Clean energy and other aspects of sustainability can also help a brand stand out in consumers’ minds as they face “almost unlimited choices” when they buy beer at grocery or other beverage stores, he said.

Funding capital investments can be a challenge, however. Jackie O’s got a grant from the Department of Agriculture’s Rural Energy for America Program. Having a quarter or more of the renewable energy project’s costs covered helped a lot, owner Art Oestrike said.

In contrast, Land-Grant hoped to use Property Assessed Clean Energy financing for its clean energy projects. However, a rule change for PACE funding precluded its use because the brewery had also received a Small Business Administration loan.

As a result, some of Land-Grant’s larger industrial energy efficiency projects were put on hold. Go Sustainable Energy, a Columbus consulting firm, is helping the company pursue other avenues for funding, Valentino said.

Breweries aren’t just turning to clean energy for their own needs. They’re promoting it to others as well, thanks to their role as community centers.

“When you’re a community center that’s actually making something, then you have a closeness to your customers and the ability to showcase what you do within your own walls,” Oestrike said. “If you have sustainable initiatives and directives, that’s an excellent way to showcase it and talk about it.”

“Breweries all across the nation are marketing their green focus,” said energy analyst Peter Kleinhenz at Go Sustainable Energy. For craft breweries in particular, “sustainability is both economical from a business sense and an incredibly easy way to engage with their customers and communities. All of these initiatives double as marketing and branding.”

“A significant portion of the clientele for craft breweries is a demographic that cares about the environment and climate issues,” said Jane Harf, executive director at Green Energy Ohio.

Great Lakes’ solar panels in Cleveland’s Ohio City neighborhood also act as a “billboard” to show passersby that solar is feasible in Ohio, Kliorys said. As of May 17, the company had produced more than 32,000 cases of beer with solar energy, according to its website.

Kliorys and Great Lakes are collaborating with others at the National Brewers Association on a “best practices” manual for the industry on energy usage, green buildings, water usage and wastewater. They’re also working on a benchmarking tool so breweries can compare their energy usage to similar breweries by size and region.

“Good ideas spread quickly through word-of-mouth in the brewing community, and it’s not uncommon for breweries to share tips on how to save money on energy costs,” Hemminger said. The Ohio Craft Brewers Association formed its own sustainability committee last year to promote those and other efforts in Ohio, with Valentino as the chair.

Oestrike said it will probably take about seven years for his brewery to recoup the investment on Jackie O’s solar energy equipment. In his view, though, that “doesn’t really matter” if climate change continues without some steps to rein it in.

“We’re not going to be here if we don’t start leading by example,” Oestrike said.

Talking about craft breweries naturally led to talk about beer. Brewery folks and clean energy experts share a few of their favorites with the Energy News Network: